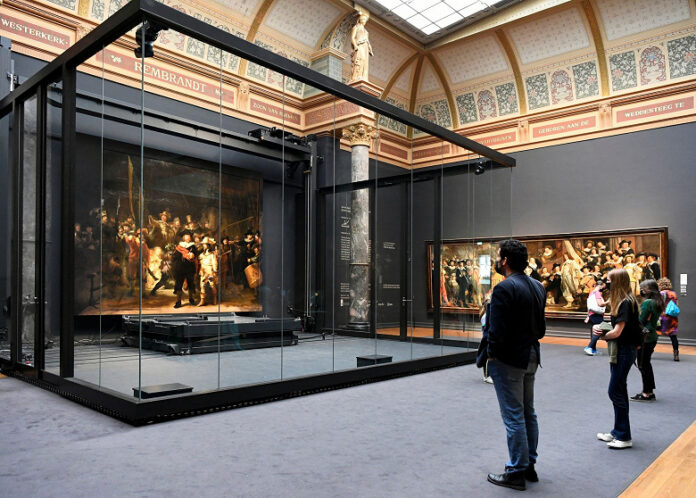 For the first time in 300 years, Rembrandt’s famous painting “The Performance of the Rifle Company of Captain Frans Banning Cock and Lieutenant Willem van Rijtenburg” is again shown in its original size.

Rembrandt completed the large canvas, commonly referred to as The Night Watch, in 1642. The painting, now considered one of the greatest masterpieces of Holland’s Golden Age, was cropped on all four sides in 1715 during the move to a new hall where it would not otherwise fit. Although these strips have not been found, there is a copy made by Gerrit Lundens circa 1655. Restorers and AI specialists used it to recreate the missing pieces while preserving Rembrandt’s style. The central figure in the painting, Captain Frans Bannink Kok, is now more off-center, making the work more dynamic. On the right, part of the drummer figure has been restored. Three figures have been added on the left, which are not very detailed and show gawkers rather than members of the militia. Rembrandt included them in the composition to direct the viewer’s attention to the central part. For the restoration, the Night Watch and the copy, which, by the way, is much smaller in size, were photographed, after which specialists adjusted the dimensions and adjusted Lundens’ work to match the figures and other objects more precisely. Then artificial intelligence software tried to reproduce the style and colors of Rembrandt, and people evaluated the degree of similarity.

According to the restorers, in the future it is possible to create a higher-quality version, as technology is improving all the time.

The painting is now considered one of the most valuable masterpieces of the Dutch Golden Age. It did not come down to us in one piece, however, because in 1715 the edges on all four sides of the canvas were cut off to fit between the two doors of the Amsterdam Town Hall. 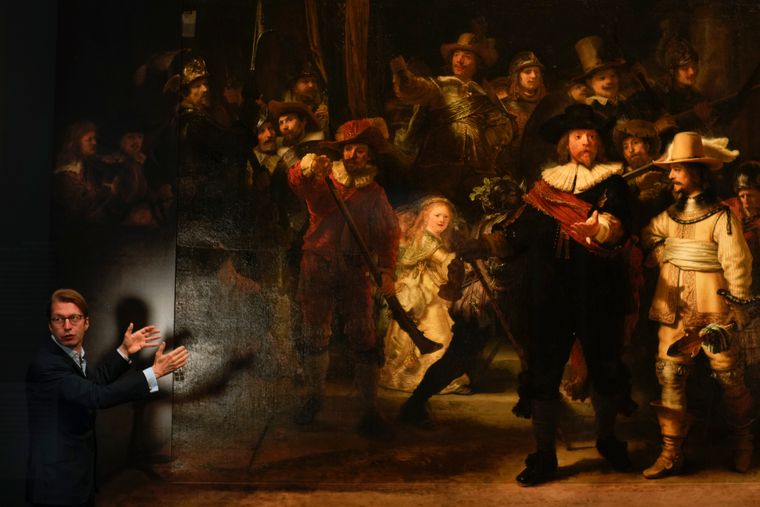 The severed strips could not be found, but another artist of the time made a copy of the painting. Now restorers and IT specialists used the copy in conjunction with Rembrandt’s style to recreate the lost parts.

“It will never be the original, but I think it will give you a different idea of the composition,” said museum director Taco Dibbitts.

According to experts, the central figure in the painting – Captain Frans Bannink Kok – along with the restored edges now seem less central. This makes the composition more dynamic. The figure of the drummer, who enters the frame on the right, has also been restored.

The three other restored figures now back in the picture are not overly detailed and are incidental witnesses to the event depicted. According to Dibbitts, it was this effect that Rembrandt wanted to draw the viewer into what was happening in the painting.

Robert Erdmann, senior researcher at the State Museum in Amsterdam, explained how the missing pieces were created and displayed in the museum in a way that complemented the original painting.

So, first the Night Watch, as well as its copy, were carefully photographed. The researchers then scaled the images.

Artificial intelligence helped to bring the missing parts closer to Rembrandt’s style, and already specialists determined which option of such restoration to choose.

Want To Decorate Your Home With Art? Here’s How

The first ever exhibition of Vincent Van Gogh’s self-portraits in his...