At the auction of Russian art, MacDougall’s on 7 of June will present paintings of such famous artists as Vasily Polenov, Kuzma Petrov-Vodkin, Konstantin Korovin, Isaak Levitan, Natalia Goncharova, Vladimir Luppian will be presented. To date, MacDougall’s is a unique auction house, because it specializes exclusively in Russian art.

MacDougall’s holds auctions twice a year as part of the Russian Week in London.

The early work of Petrov-Vodkin “Portrait of an African Boy” is the top lot of trades. This masterpiece was created in 1907 during a two-month visit to the artist to Algeria and Tunisia. An expressive, somewhat chambered image of the child was written by Petrov-Vodkin when he visited Biskra, a city in the north of Algeria. Estimate work – 400,000-600,000 pounds.

MacDougall’s includes a monumental picture of Vasily Polenov “Decided to go to Jerusalem” as one of the main exhibits. The work is part of the famous cycle of paintings “From the Life of Christ.” The artist wrote that it was “a work I devoted almost all my life”. The appearance of this picture in the art market is a unique event. Estimate works -400,000-600,000 pounds. 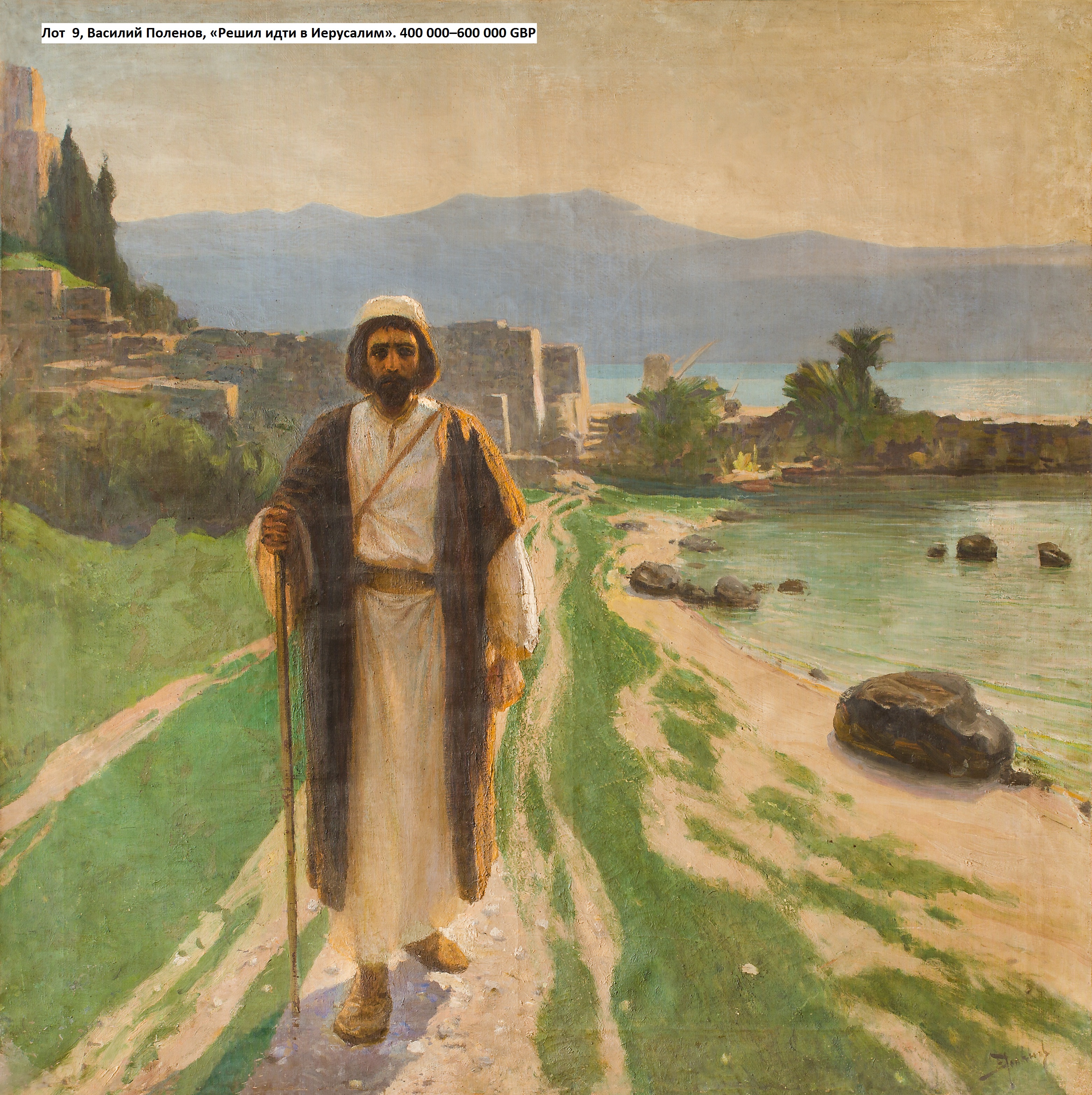 In the work of Konstantin Korovin, it is difficult to find a topic more beloved by the artist himself than landscapes with water: a river, a whirlpool, a dam, a dam or a lake. He often writes such works quite quickly, on fishing or hunting, in the interval between the expectation of a bite or shots in the game. The “frozen pond” is a perfect example of such compositions.

Written neatly laid parallel strokes – it sets the dynamic rhythm of seemingly devoid of any action to the rural landscape. The centripetal twist, created by the energy of the brush movement and the color richness of large strokes, gives a feeling of anxiety and a restless snow drift. Human figures walking along the shore, like some important for the color composition details in the depths to the left near the houses, are barely marked. For an artist, painting is always more important than objects or even a person. Estimate works 150,000-200,000 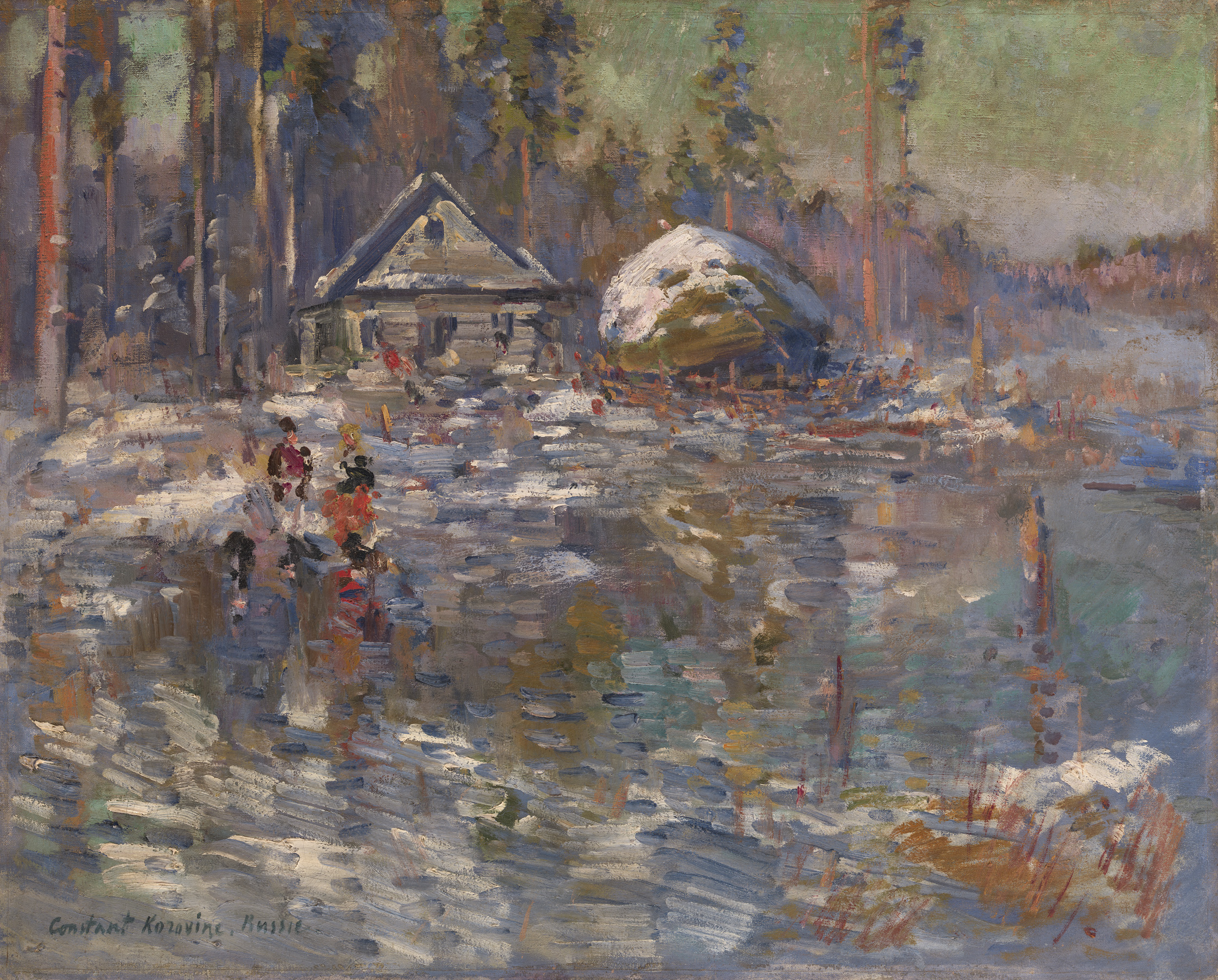 Another picture of Korovin’s “Embankment of Admiral Courbet in Villefranche-sur-Mer” is presented at an auction. In the living canvas, the carnal palpability of the best southern landscapes of Korovin is felt. The freshness of the perception of nature, the freedom of self-expression, the subtlety of the transmission of light effects, the beauty and color richness of southern Mediterranean life give rise to a feeling of light, joy, and lust for life characteristic of many of the Korovinsky landscapes. Deserted during the siesta embankment, buildings that are burned in the sun, and vibrating green-blue shadows of water are written with brilliant artistry. Estimate work – £ 300,000-400,000. 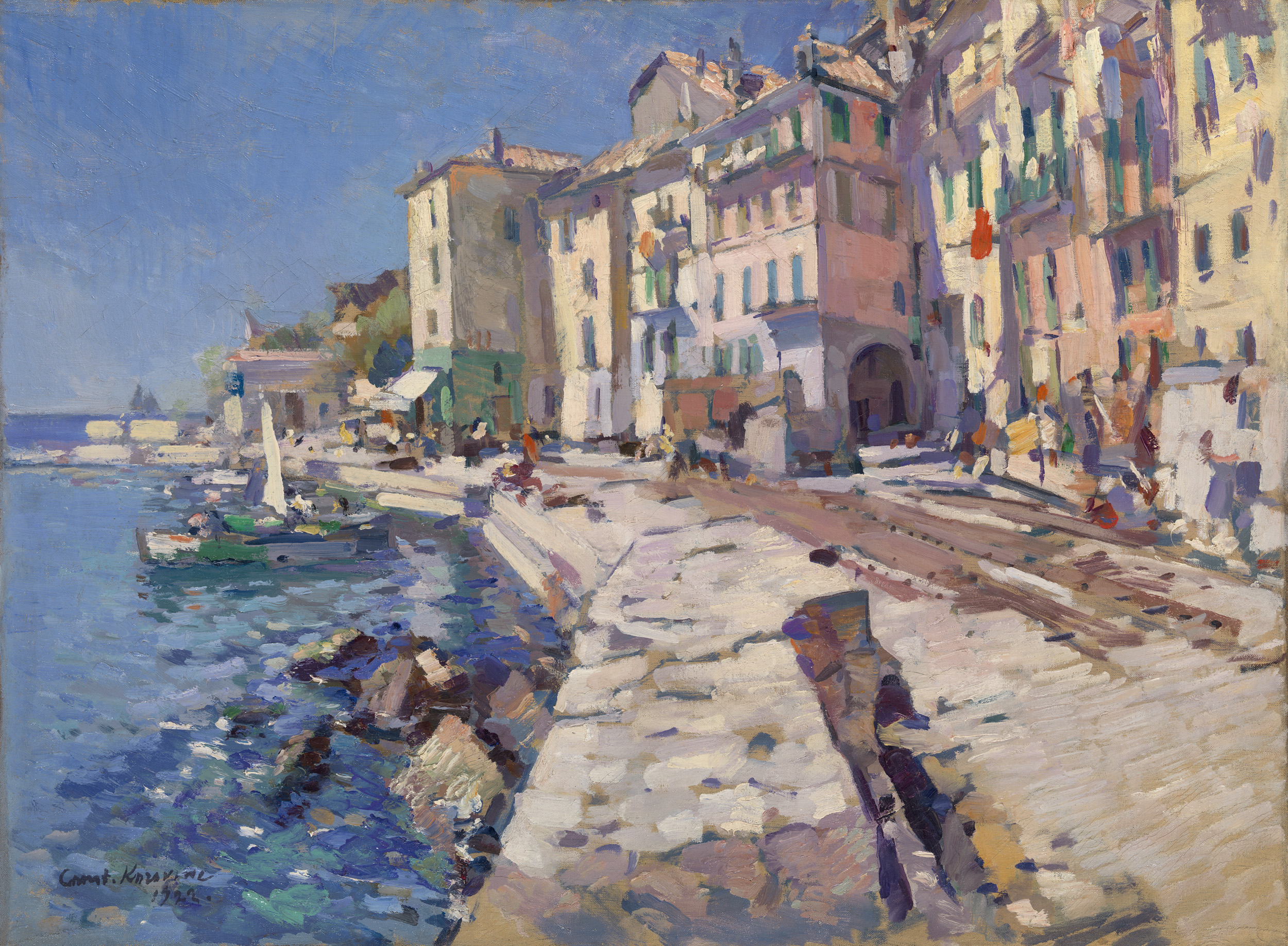 Determine the time for creating the submitted for auction composition “Bouquet of magnolia with a glass” is quite difficult. Still, lives of Goncharova’s Paris period, in general, are difficult to date: in the series of canvases, the same motif sometimes varies in different styles – from realistic sketching to an almost pointless composition. Written with dense palpable colors “Magnolia bouquet with a glass” – a lighter and festive version of the composition, with the same “materiality” as its darker counterpart with a cup, – conveys the sense of the object shape of the glass jug and the standing in it The branches of magnolia and can serve as a reflection of the artist’s general aspiration for “nature”, about which she wrote: “In the way of happy images I can find even new combinations of shapes, new combinations of colors … I can also look for abstract formulas, but this is only Abstract forms Mules. A real solution can only be in life itself. The unconscious instinct pushed me in this direction. ” Estimate work – £ 210,000-250,000

The painting “Spring in the Village” refers to the period of Konstantin Korovin’s life in the Ushakovs’ Estate in Ostrovno village of Vyshnevolotsky Uyezd, Tver Province. The picturesque nature of those places, the spiritual comfort of the family of the philosopher and religious thinker Boris Vysheslavtsev and his wife Natalia, who became the heroine of a whole series of master paintings, marked a separate chapter of Korovin’s work. The wooden terrace engraved on canvas was repeatedly reproduced by the artist in his works and served as a backdrop for numerous landscapes and portraits. Filled with the sun, barely freed of snow, the radiant blue of the sky and the general major state are a kind of reflection of the most enthusiastic nature of Korovin, his inherent cheerfulness and love for the surrounding nature and people. Estimate work – £ 150,000-200,000.

Also at the auction will be presented the work of George Nyssa “Iceberg” with the estimate of £ 70,000-90,000. The interest of George of Nyssa towards the northern sea, its expanses and harsh solemn beauty is connected with the romantic aspirations of the post-war development of the Soviet Arctic. The painting “Icebergs” demonstrates a characteristic for the artist reception, when a hardly noticeable at first glance airplane bursts into the composition, creating intersecting multidirectional trajectories of motion, and the landscape is filled with dynamics and a sense of “modernity of life”, for which they invariably valued and rewarded Artist. 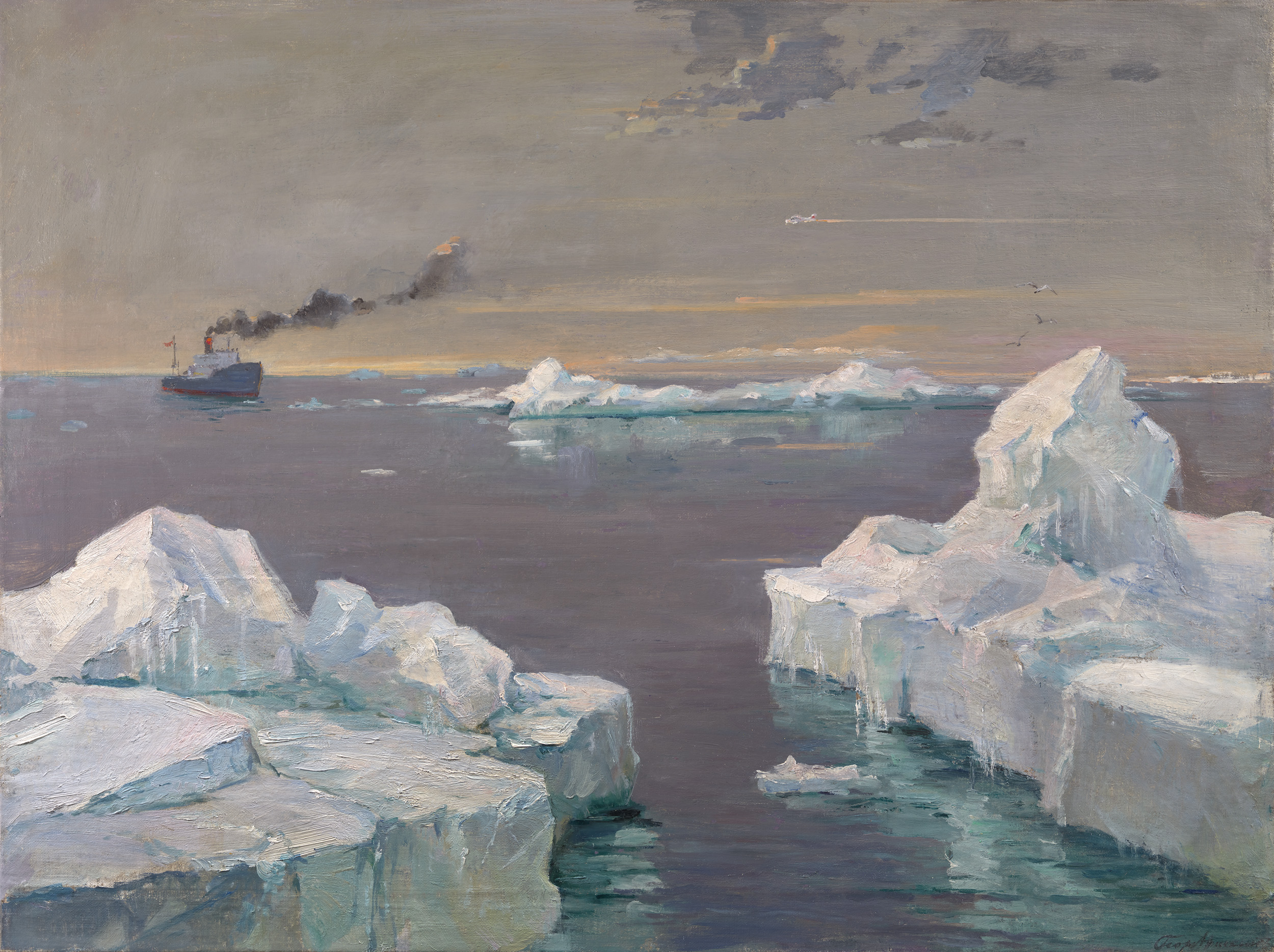 “Still life with fish” was written by David Shterenberg, according to the testimony of his daughter Vialka, in the 1920s, when the training at the Vitti Academy under the leadership of Henri Martin and Kees van Dongen, the turbulent life of the Paris Hive, the fascination with cubism and Paul Cezanne Were already behind. Swift green and yellow-red swirls of the background are exquisitely written and portend the picturesque maestro series of “grass” of the late 1920s. But at the same time, the artist does not refuse from his avant-garde principles of interaction between the subject and space that lie outside the laws of linear perspective. The composition of the still life demonstrates the masterly skill of the artist, accurately and naturally “inscribing” simple subjects into the space of the picture. Estimate work – £ 150,000-200,000 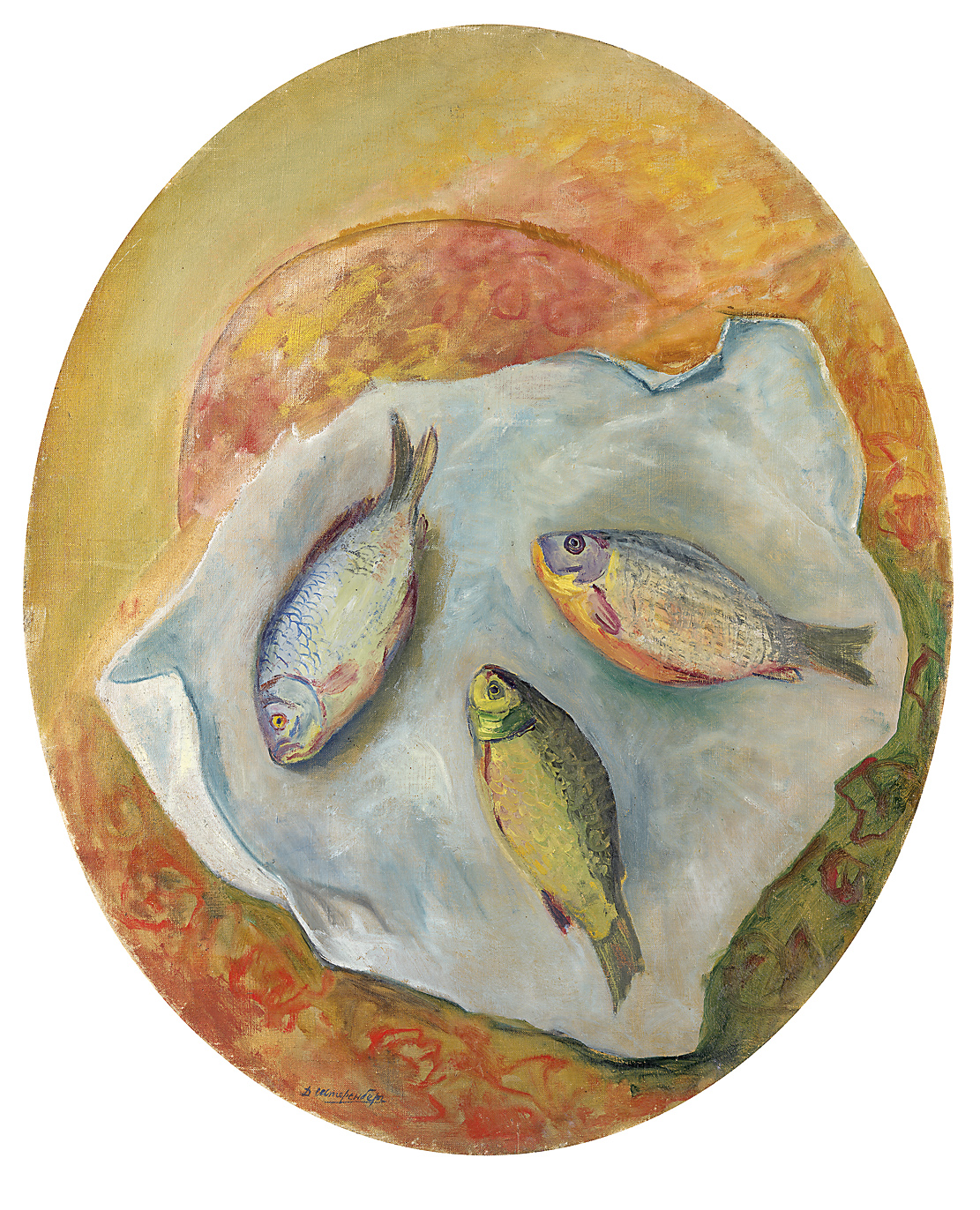 The work presented at the auction is the main “philological” work of Vladimir Luppian, over which he worked for more than thirty years. Luppian was a disciple of Pavel Filonov, devoted not only to him personally, as a pupil to the teacher, but also “family”: his wife, actress Maria Sysoevna sewed costumes for the famous production of the “Inspector” by Igor Terentyev according to the sketches of the team of masters of analytical art, and his daughter Muza also studied With Filonov. Estimate picture – £ 200,000-300,000. 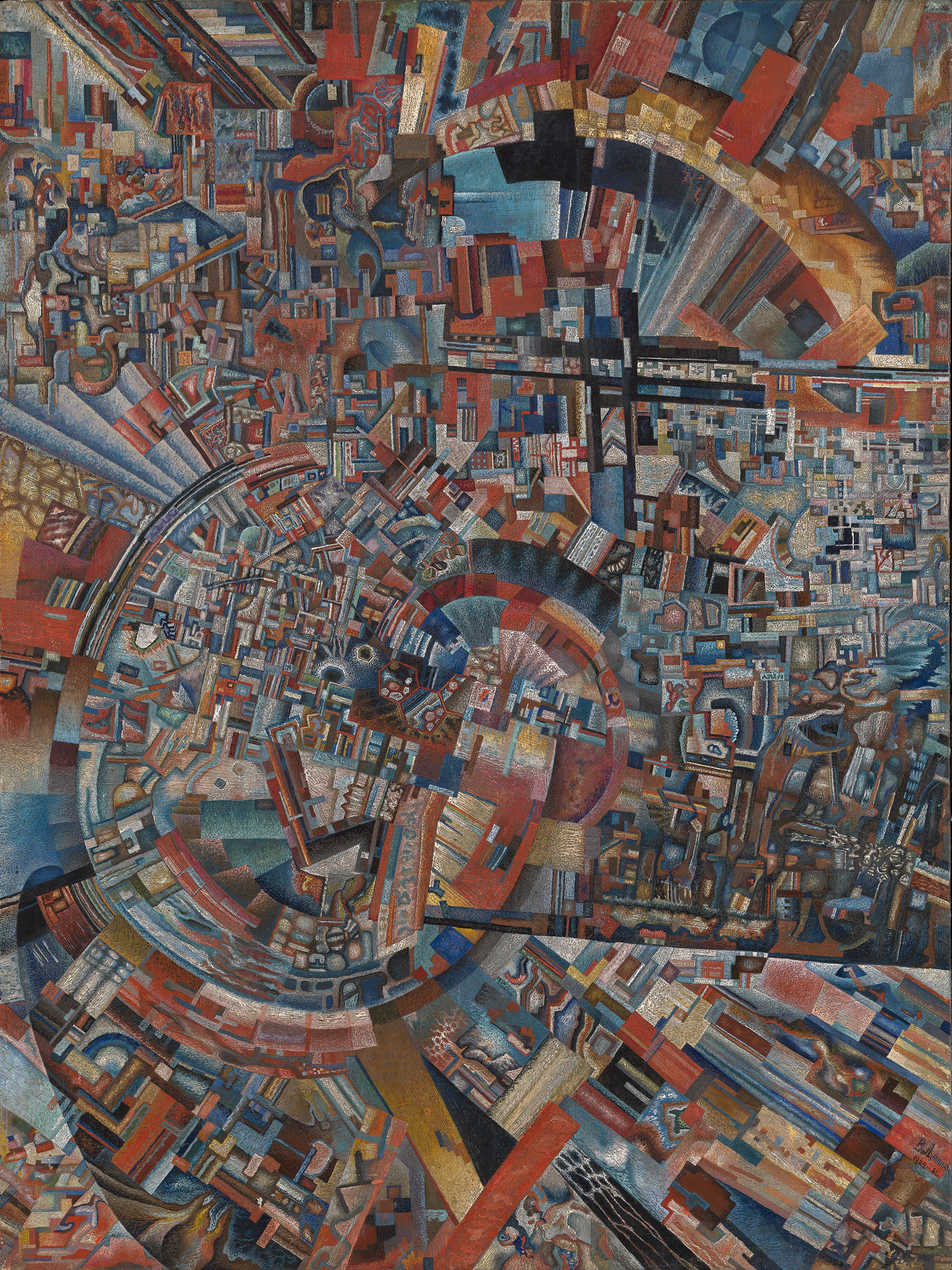 Alexey Kravchenko, the master of the Russian figurative avant-garde, is represented at the auction by the magnificent work of the “Skier” in 1928. At this time, the artist, returning from Italy and France, where he held a number of exhibitions, has already established himself as a brilliant draftsman and subtle colorist. “Skier” – a vivid example of the great talent of Kravchenko the painter. The minimalistic coloring of the picture closes on the scarlet accent of the girl’s sweater, and through gentle blue and blue colors animates the atmosphere of a frosty winter day. Estimeyt work – £ 80,000-120,000. 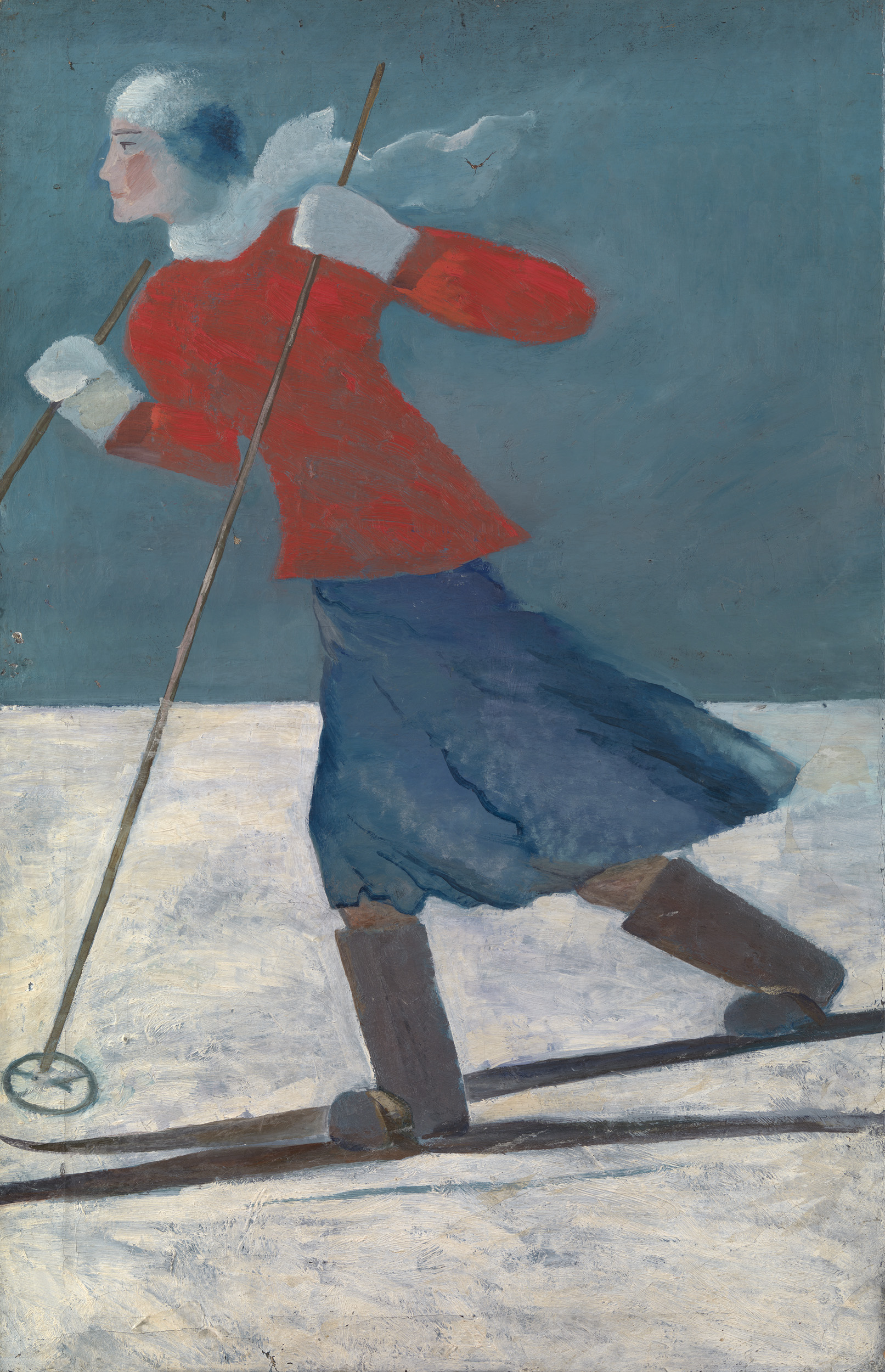 The picture of Vladimir Baranov-Rossine “Cubic Nude” presented for sale belongs to the period of the master’s creative work of the turn of the 1910s-1920s, when the “color utopianism” of his sketches of the first post-revolutionary years was replaced by the desire to synthesize – the fusion of the color, plastic and musical principle in One work. Consonant with the movement of time – the time of futuristic aspirations, the “color-dynamics” of Aristarkh Lentulov’s paintings, the “sliding” experience of color in Mikhail Larionov’s radiation, the works of Baranov-Rossini were examples of the skillful adaptation by the artist of the picturesque finds of different styles characteristic of the international artistic environment of Paris. – £ 180,000-250,000. 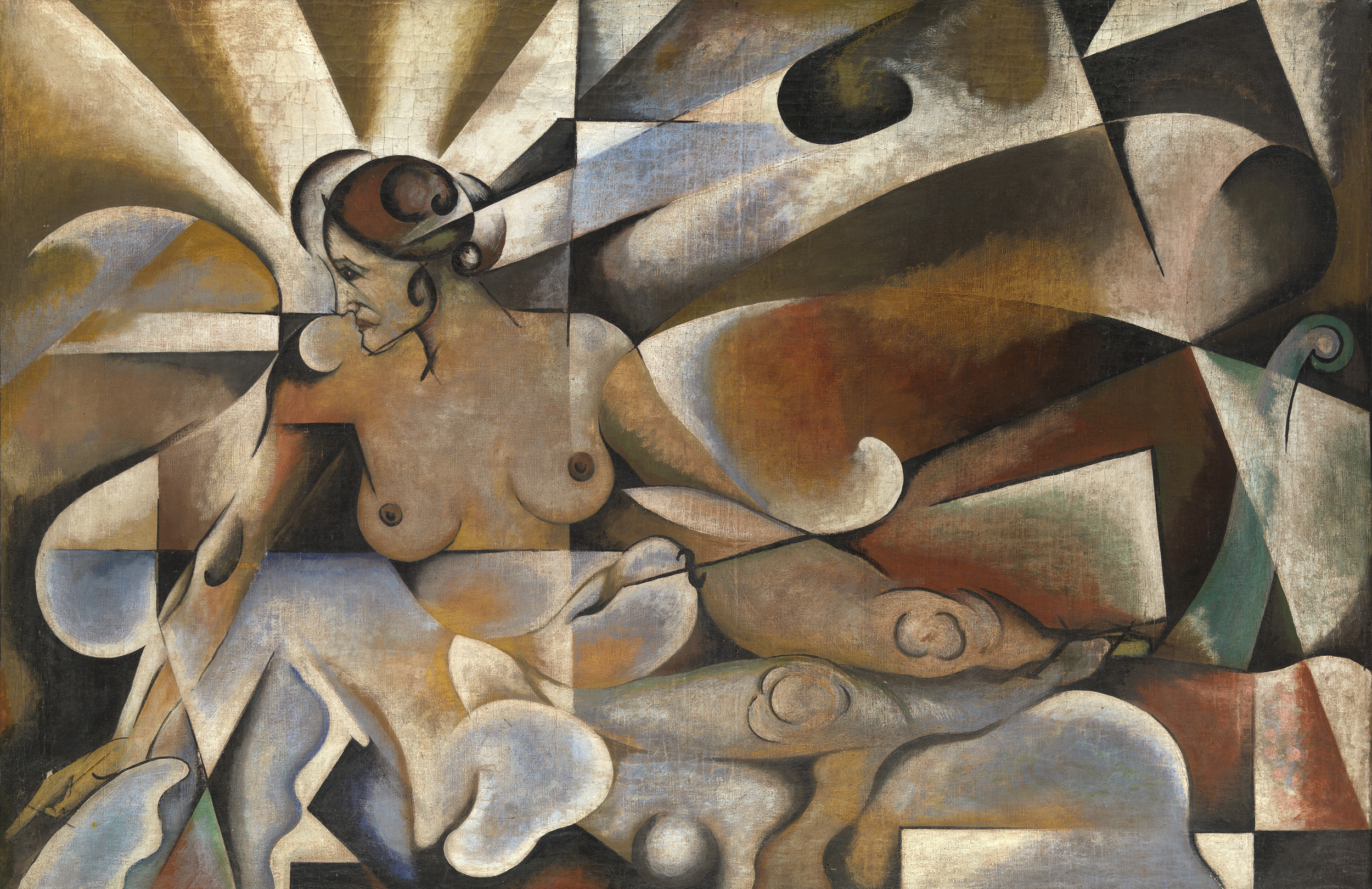 Isaak Levitan, the most eminent Russian landscape painter, is represented in this catalog with the pastel “Autumn” imbued with elegiac mood. Despite the fact that Levitan is known primarily as a painter, it is in his graphic works that the artist’s deep penetration into the life of nature and the ability to catch its subtle changes was expressed.

Presented at the auction work from the collection of the famous collector of Russian art Ivan Ivanovich Tarasov – an example of the highest skill of Levitan in his rare technique, which fully expressed the elusive beautiful, snapping charm of Russian autumn. Estimate work – £ 200,000-250,000. 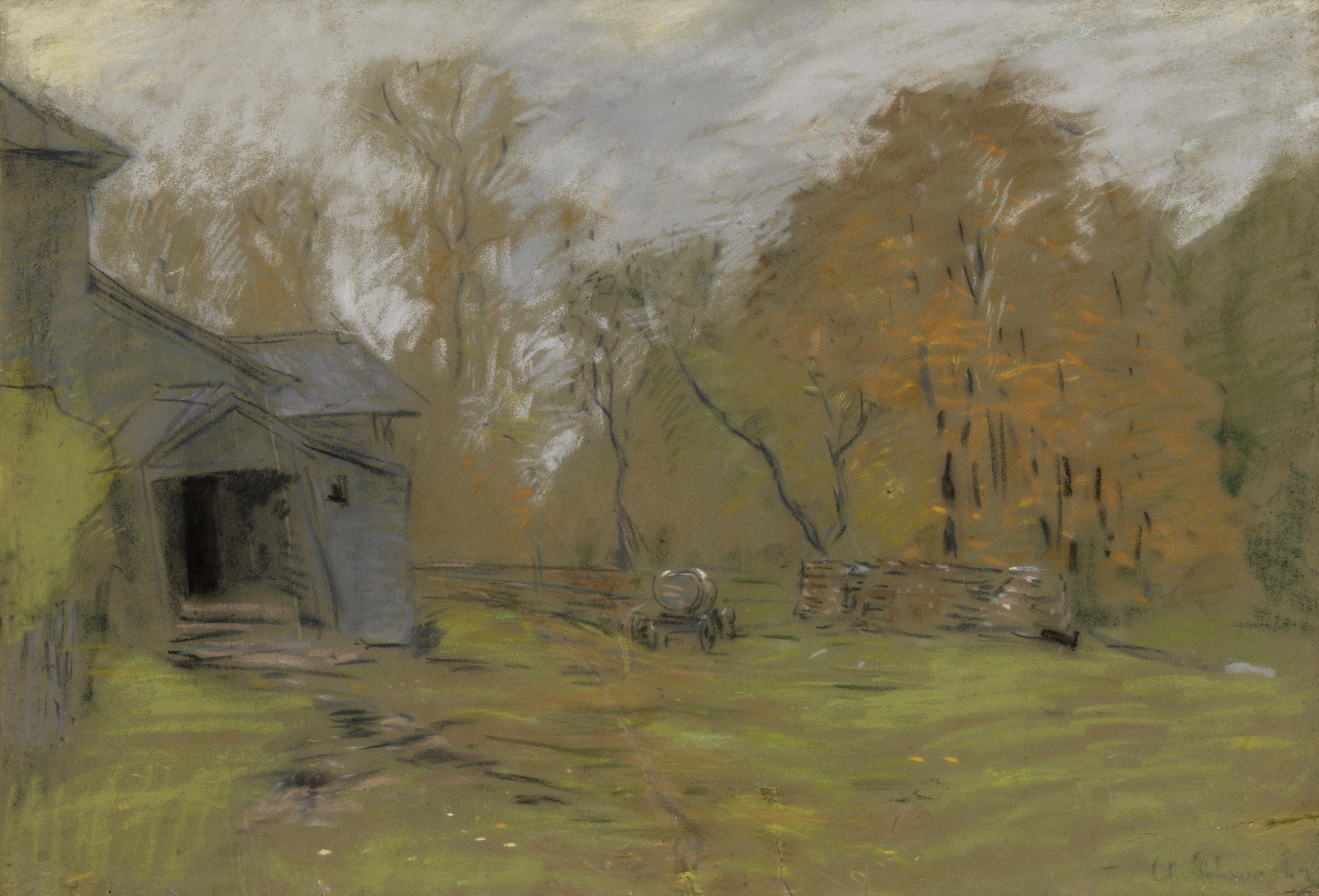 The idea of creating a composition on the theme of the Yalta Conference of 1945 visited the founding fathers of the social art Vitaly Komar and Alexander Melamid in the early 1980s. As Komar later recalled: “It seems that in the late 1970s I first saw a photo from the Yalta conference. This card bewitched me. During the Cold War, it was banned. Stalin could not sit next to our enemies. We defeated Germany without them and in spite of them. And here they sat as relaxed as relatives, Roosevelt a democratic president, Stalin a bloody dictator and servant of the monarchy Churchill. We sat together and decided how we would arrange the next world for the next few years. ” Estimate work – £ 80,000-120,000.

Timothy Sammons Faces Extradition to US