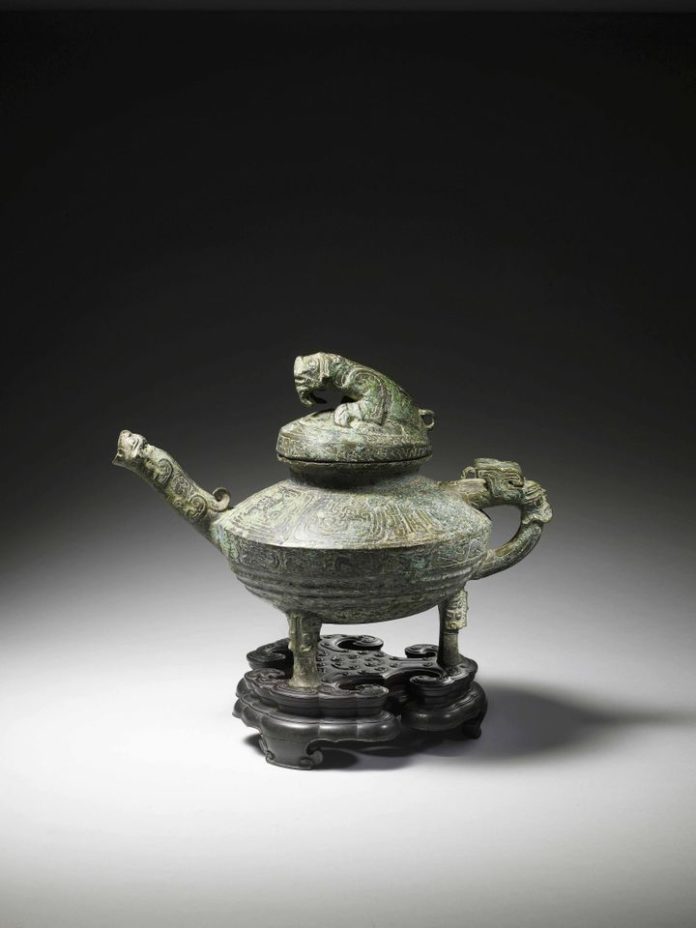 Its sale at The Canterbury Auction Galleries proceeded in the face of outcry in China, including calls by its State Administration of Cultural Heritage and the China Association of Auctioneers to boycott the sale.

The vessel, which dates to the Western Zhou (1027-771 BC) period, was rediscovered only last month in the attic of a bungalow in a seaside town in Kent by the dealer Alastair Gibson, the auction house’s consultant in Chinese art, along with three other later Qing Dynasty bronzes. They had been brought back from China by Royal Marines Captain Harry Lewis Evans (1831-1883), who was present when the emperor’s Summer Palace in Peking (Beijing) was looted by British and French forces in 1860 during the second Opium War. Initially estimated at £120,000 to 200,000, the Tiger Ying is one of seven such vessels known to be in existence, of which five are in museums.

“When I was first shown it, the provenance wasn’t actually mentioned to me, all I saw was the beautiful Zitan stand which made me think of the Guwan Tu, Pictures of Ancient Playthings, Anonymous Court Artist (around 1728), now in the British Museum, on loan from the Percival David Foundation, which illustrates bronzes and porcelain from the Imperial collection” Gibson says. “I then went to see the vendor and all was revealed, the handwritten family archive, the dated photograph albums which shows the Ying and the other vessels at Evans’ house in 1912. The process of research then began…”

China’s Cultural Heritage department argues that all items looted from the Summer Palace should be returned to the country and, as usual in such instances, opposed this auction. “We don’t agree any organisation, home or abroad, should take part in the auction,” the department said in a statement released Tuesday, and reported in China Daily. “We also call for people with humanitarian spirit to commonly boycott auctions of cultural relics that were lost in illicit ways.” The statement claimed that the administration had contacted Canterbury Auction Galleries requesting that it withdraw the lot and received a refusal on Monday.