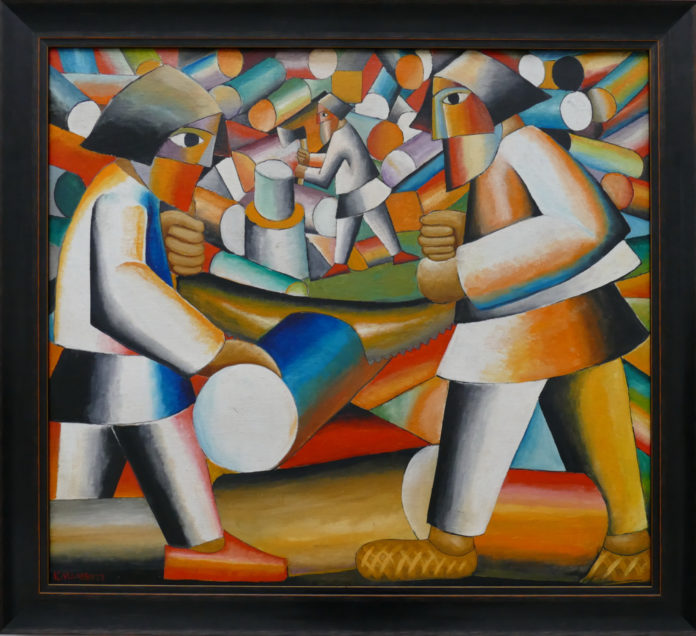 In 2019, you and I have seen a number of scandals in the world of high art related to the verification of the authenticity of works of famous masters, as well as their actual belonging to the owners. Let’s find out how loud cases about fakes of the Russian avant-garde, the famous Bryullov’s painting and the portrait of Frans Hals’s brush, recognized as fake, develop (or to what end came).

Igor and Olga Toporovski are in custody on charges of fraud.
Collectors Igor and Olga Toporovskikh were taken into custody in Belgium on December 16, 2019 on suspicion of fraud, money laundering and stolen trade. Their arrest was extended on December 20, 2019. Toporovski are in Ghent prison. The scandal began with an exhibition entitled “Russian Modernism”, which opened at the Museum of Fine Arts in Ghent (MSK Ghent) on 20 October 2017. At that time, the museum’s permanent exhibition officially included 26 works by Russian avant-garde artists, provided to the museum under a long-term lease by the Dielegem Foundation of collectors of Russian origin Igor and Olga Toporovskikh. Catherine de Seger, Director of MSK Ghent (curator of the Moscow Biennale-2013) initiated the renewal of the exhibition. The audit carried out at the request of the city by Ernst and Young in the museum did not reveal any serious violations, but de Zeger had to dismiss the director. It was supported by 63 prominent cultural figures from around the world, including the directors of the Tate Modern in London, the Pompidou Centre in Paris, the Museums of Modern Art in Sydney and Seoul and many others. The museum’s press office then explicitly stated that the museum is not responsible for the authenticity of the works, it is the responsibility of the collector who provided the paintings. The Ghent authorities are continuing their investigation, “caught” in the unscrupulous documents concluded by former director Catherine de Zeger and the Dilegem Foundation. In particular, there are inconsistencies in the timing of the exhibition and the date of the contract, and there are no signatures from the municipality. In this regard, the authorities have had occasion to institute proceedings against the Foundation and its leaders Toporovski. It is reported that the investigation representatives themselves chose the paintings for examination, and the material for the study was cut from canvases directly at the house of the suspects. Toporovskikh’s lawyers have not yet commented on what’s happening, so there’s no information whether the arrest of the collectors is related to the results of the expert examination or whether the authorities will extend it. The collection of paintings has also been arrested. Let us remind you that the investigation was initiated by a letter signed by art dealers James Butterwick, Alec Lachman, Julian Baran and Ingrid Hutton, as well as Kazimir Malevich’s granddaughter – Yvona Malevich. The exhibition “Russian Modernism” presented previously unknown to the public works, the authors of which are Alexander Exter, El Lisitsky, Natalia Goncharova, Vasily Kandinsky, Kazimir Malevich and other stars of the Russian avant-garde. Art historians, who signed the letter about suspicious paintings, criticized the presented collection without using the word “fake”. According to them, the works presented “have no exhibition history, have never been reproduced in serious scientific publications and have no verified sales reports. Read more about Toporovsky’s collection of avant-garde works and its “origin” in our material.
The singers have been denied ownership of Bryullov’s painting.
Became aware of the details of long-term litigation collectors Irina and Alexander Pevznerov, citizens of Germany, the case of the return of the painting “Christ in the grave” brush Karl Bryullov. In October 2019, by decision of the Judicial Collegium for Criminal Cases of the Supreme Court of the Russian Federation owners of the painting was denied the right of ownership. And this despite the decision of the Presidium of the Supreme Court of Russia, which in the summer of 2017 obliged the Russian authorities to return the painting by Briullov its rightful owner. Then the court found that confiscation of property may take place only within one year after the entry into force of the court decision to return the property. The collector noted that in his case, almost two years had passed between the court decision to return the property and the subsequent court decision of the Supreme Court of Russia on its confiscation. Nevertheless, the painting remains in Russia and will obviously remain in the State Russian Museum. Recall that the work, on which there is no signature of the artist, was purchased by Alexander Pevzner in 2002 for 100 thousand euros. Collector from Germany has invested at his own risk in a canvas-transparent “Christ in the Tomb”, attributed to Karl Bryullov. In order to finally attribute the work, in 2003 Pevzner brought the painting to the Russian Museum for examination (the collector has an explanation that it was the specialists of the Russian Museum who were required to examine it). After the museum confirmed the authenticity of the authorship of Karl Bryullov, the collector was accused of “false declaration” of the painting when importing it into Russia, as a result, the painting was confiscated. Artchive covered this high-profile case in the news (1, 2, 3, 4). “Exhibit evidence” remained in storage at the Russian Museum, and its owner began legal proceedings to recover its property. The case received an international response, and despite the court’s decision, it is not yet clear whether it is definitively overturned. Sotheby’s got half the money paid for the fake Hulsa.
Sotheby’s was able to regain half of the compensation paid to the buyer of a fake painting by Frans Hals – London investment company Fairlight Art Ventures will pay the auctioneers $5.375 million with interest and other costs. The payments were approved by the Commercial Court, which ruled on December 11, 2019 on equal obligations of Fairlight Art Ventures and Sotheby’s. Recall that we are talking about compensation for the painting allegedly by the brush of Frans Hals, which after the sale at the auction soon announced a fake. Fairlight Art Ventures – the company, which was the co-owner of the painting together with the company Weiss, Mark Weiss Ltd. Recall that the case of the notorious fake picture of Hulsa – one of the biggest scandals of fairies in today’s high art market. The story began in 2011, when the painting “Portrait of the gentleman”, which, as it was believed, belonged to the Dutch painter Frans Hals, was sold at an auction Sotheby’s for $10.7 million. The deception was revealed only in 2016. The transaction was cancelled, the auctioneers returned the full amount to the buyer, Richard Hedrin. Thorough technical expertise confirmed the presence of modern pigments in the materials.
How are things at “Ivan the Terrible”?
In the Tretyakov Gallery continues restoration work to restore the painting by Ilya Repin “Ivan the Terrible and his son Ivan November 16, 1581”, better known as “Ivan the Terrible kills his son. We remind our readers: On May 25, 2018 in the State Tretyakov Gallery the visitor broke the glass in the painting. Using a metal fence post, the man damaged the painting itself. For this barbaric act, committed under the fumes of alcohol, Igor Podporin received two and a half years in the general regime colony. The Tretyakov Gallery, on the other hand, received a difficult work to restore the famous canvas, which was damaged in three places. To date, have already conducted a chemical analysis of the threads of canvas, pigments and soil, the picture was studied in ultraviolet and infrared rays, X-ray. Specialists have compared the techniques and technology to create other paintings of Ilya Repin to select analogies. Especially for this large canvas (picture size 2 m x 2.54 m) created a unique table-transformer, on which it now lies the back side up, fixed magnetically.

The canvas has already been visited several times by Western expert restorers from the Netherlands, Denmark, Great Britain and Italy, with whom the Tretyakov Gallery constantly consults. According to Julian Khalturin, head of the department of complex research of the State Tretyakov Gallery, the weak connection between the colorful layer and the base was noted back in 1934, since then the state of the painting is constantly monitored. It is because of this fragility of the painting never left the walls of the Tretyakov Gallery – the exception was the evacuation in 1941, but even then the canvas was not rolled on a shaft, and carried between two shields. For today experts have already removed the duplicate canvas and now solve problems of removal of old glue from an original canvas. The painting is to be duplicated, one of the most difficult processes in restoration. There are funds for restoration – the cost of saving the masterpiece has volunteered to cover “Sberbank”. Restorers are careful in assessing the end of the work, although it was previously reported that the picture will return to the audience in 2020.