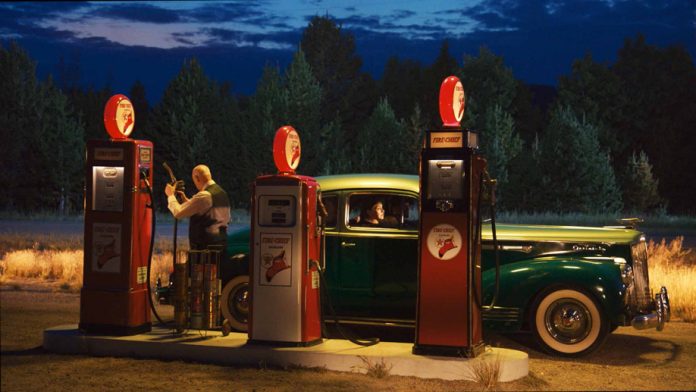 The Beyeler Foundation (Canton Basel, Switzerland) dedicated its main spring exhibition in 2020 to the works of Edward Hopper – one of the most important American artists of the 20th century. The highlight of the exhibition was the screening of a short 3D film “Two or Three Things I Know About Edward Hopper”, shot by the famous director and photographer Wim Wenders.

The film, which is shown in a special hall in a non-stop mode, was a personal tribute to the German film classics to Edward Hopper. According to Wim Wenders, the American artist’s paintings made a lasting impression on him when he first saw them in the 1970s. To shoot the film, the director undertook a tour of the United States in search of the “spirit of Hopper. Poetically and movingly, the 15-minute film “revives Hopper’s frozen canvases without dialogue, but with a powerful musical accompaniment written by French composer Laurent Petitgand, who had previously worked with the director,” reports SWI (swissinfo.ch).

Wim Wenders is a German film director, scriptwriter, producer and photographer, winner of numerous honorary awards and prizes and president of the European Film Academy. His extensive filigree work includes such films as “Paris, Texas”, “Sky over Berlin”.

According to SWI, the film “Two or Three Things I Know About Edward Hopper” will be screened in the presence of Wim Wenders on March 23 at the Beyeler Foundation. The short film by Wes Anderson will be premiered at the same time and its title will be announced later. This will be followed by a discussion with two directors.

The show “Edward Hopper” at the Bayeler Foundation is dedicated to landscapes in the paintings of the artist, who became famous mainly for his images of scenes of urban life in the 1920s – 1960s. “Surprisingly, no exhibition to date examines Hopper’s comprehensive approach to American landscape,” the curators say. The exhibition includes 65 works in oil, watercolors and drawings dating from 1909 to 1965. The works of the American master are first shown in German-speaking Switzerland.

Edward Hopper’s paintings and footage from “Two or Three Things I Know About Edward Hopper”.

Edward Hopper (1882 – 1967), recognized as one of the most important artists of the 20th century, was born in Nyke, New York. Studying as an illustrator, he then studied painting at the New York School of Art until 1906. The young artist found key references in German, French and Russian literature, as well as painters such as Diego Velázquez, Francisco de Goya, Gustave Courbet and Edouard Manet. Although Hopper worked for a long time mainly as an illustrator, his fame is based above all on paintings, testifying to his deep interest in colour and virtuosity in representing light and shadow. Moreover, based on his observations, Hopper was able to create a personal aesthetic that influenced not only painting but also popular culture, photography and cinema.

The idea for the exhibition arose when the Kay Anne Peninsula, a landscape painted by Edward Hopper in 1928, joined the Beyeler Foundation’s collection on a permanent rental basis. For several decades, the work belonged to the famous Rockefeller collection. It dates back to a period when Hopper began to attract increasing attention from critics, curators and the public. In 1929 he was invited to participate in the second exhibition of the Museum of Modern Art “Paintings of nineteen living Americans.

“Landscape paintings always show the influence of man on nature, and Hopper’s paintings reflect it in a subtle and multifaceted way. He has established a distinctly modern approach to the time-tested genre in art history. Unlike academic tradition, Hopper’s landscapes seem endless; in our opinion, they are endless and always seem to show only a small part of a huge whole,” the exhibition’s curators write.

Hopper’s American landscapes are geometrically pure compositions. Their main elements are houses, symbolizing the human presence. Railroad tracks structure images horizontally and indicate a person’s desire to conquer wide spaces. The huge sky, as well as special light moods – bright midday sunlight or a glimpse of sunset – illustrate the immensity and constant transformation of nature, even in a static landscape painting. A lighthouse can become a point of reference on the vast sea and coast.

Hopper’s landscape paintings are always connected with something invisible that happens outside the composition. For example, the heroine of the painting “Morning on the Cape Cod” (1950) looks out of the bay window, her face is flooded with dawn rays, but the viewer can not see what the attention of women, because the object is located behind the scenic space.

Like all Hopper’s paintings, his landscapes are defined by melancholy and loneliness. They often contain a sense of inexplicable fear and a gloomy feeling. The artist played an important role in rooting the concept of “melancholic America”, which popularized films such as “North by Northwest” (1959) Alfred Hitchcock, “Paris, Texas” (1984) Wim Wenders and “Dancing with Wolves” (1990) Kevin Costner.

The exhibition “Edward Hopper” at the Museum of the Beyeler Foundation will continue until May 17.