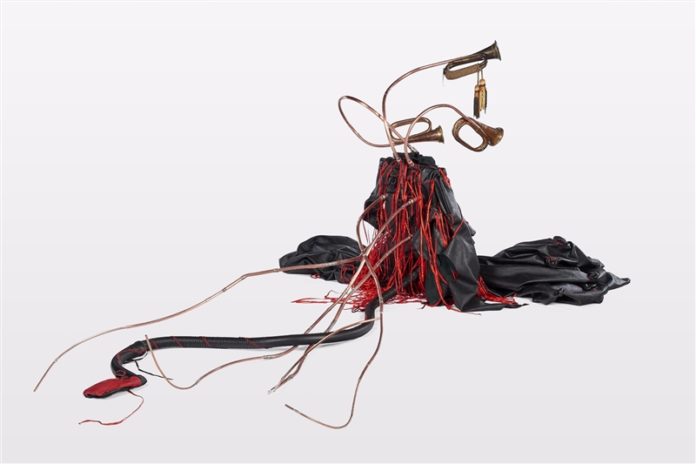 In this release, Fiac collected 193 galleries from 30 countries under the name of the Great Palace and in the rooms on the top. Several galleries are opting for solo presentations, such as the South African artist Nicholas Hlobo at Lehmann Maupin. The event will be held at the Grand Palais, Paris, 19-22 October.

Other single-artist stands include humorous drawings by David Shrigley at Anton Kern, an installation by Sammy Baloji at Imane Fares, sculptures by Jeppe Hein at 303 Gallery, and portraits by the African-American artist Henry Taylor at Blum & Poe.

Nicholas Hlobo is a South African artist based in Johannesburg, South Africa. He was born in 1975 in Cape Town. He earned a Bachelor of Technology from Technikon Witwatersrand in 2002. He creates large sculptural works that are expansive masses which at once feel voluptuous and highly structured. The contrast of femininity and masculinity is created by his use of dissimilar materials such as rubber inner tubes, ribbon, organza, lace and found objects.

Inspired by avant-garde architects and his idea of design as a moral issue, influential 20th-century designer, architect, engineer, and teacher Jean Prouve played a major role in the development of systems for mass production in the postwar Modernist period. From his beginnings as a blacksmith’s apprentice, he gained an understanding of metal and its limitations, driving him to seek new materials and processes like steel, aluminum, and arc welding, producing prefabricated houses, building components, and furniture for the social sector.

A newcomer to the satellite fair cluster is 13 Art Fair, dedicated to street art and skate/punk/tattoo culture, at the Docks, Cité de la Mode ET du Design, on the Quai d’Austerlitz. Founded by Sébastien Boland, it features some 20 international galleries displaying works by the likes of Shepard Fairey and Face, reflecting the ever-growing popularity of street art.

Henry Taylor paints quick, loose portraits of his relatives, friends, celebrities, and athletes on large and small canvases, as well as creating evocative sculptures and assemblages of found materials. Taylor worked for a decade as a psychiatric nurse in a state hospital in California, an experience that informs the humanity and warmth evident in his paintings.

The On-Site sector, launched last year, continues with 40 sculptures and installations in the Petit Palais and environs. On Avenue Winston Churchill, architect/artist Yona Friedman is constructing a 300 sq. m in situ “Iconostase” modular construction formed of connected rings, developed from a utopian concept conceived in the 1960s.