The Prado Museum in Madrid is proud to have the earliest documented work by Francisco Goya in its permanent collection.

The Prado Friends Foundation acquired the work Winning Hannibal’s first glimpse of Italy from the Alps by Goya for € 3.3 million (almost $ 4 million). The canvas was donated to the museum in commemoration of the 40th anniversary of the organization, which will be marked by an exhibition of all the exhibits donated by the Foundation for its many years of cooperation with the Prado.

Dating from 1771, the painting fills an important gap in the chronological history of the Prado artist of the 18th century. The artwork is joined to the Italian Notebook, a sketchbook containing numerous notes, drawings, and reflections of the artist, including rough sketches of what would become Hannibal.

The painting depicts a Carthaginian general surrounded by angels and a procession of soldiers. He will lead his armies across the Pyrenees and Alps to Italy in one of the most legendary military campaigns in history.

Goya painted this scene during a two-year stay in Italy and then submitted it as his work to a competition held by the prestigious Reale Accademia di Belle Arti di Parma. Although the main prize went to local artist Paolo Borroni, Goya’s work was praised by the press for its excellence.

For scholars specializing in the artist, this is an important record in his work. The work represents an important step in shaping the artist`s career as an artist and showed early on that he could reference history, religion, and mythology in one canvas – something he would do over and over again throughout his career. 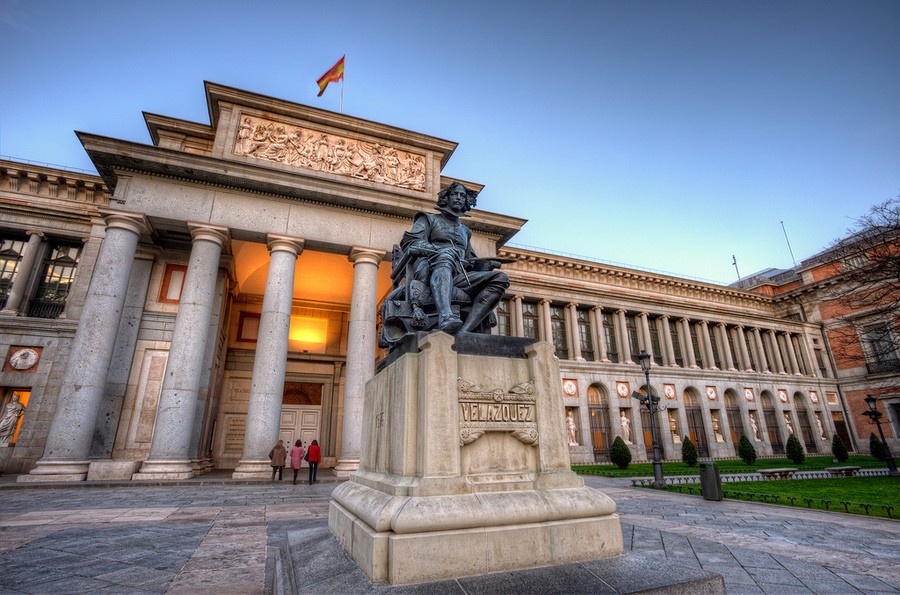 The Prado Museum in Madrid is one of the most famous art collections in the world, not inferior in wealth to the collections of the Louvre and the Hermitage. The collection is based on Spanish painting, which was later supplemented by canvases and sculptures by authors from other countries.

The artworks by Rubens, Raphael, Brueghel, Goya, Bosch, Velazquez, and other titans of painting annually attract more than two million people to the capital of Spain a year.

History of creation of the Prado Museum 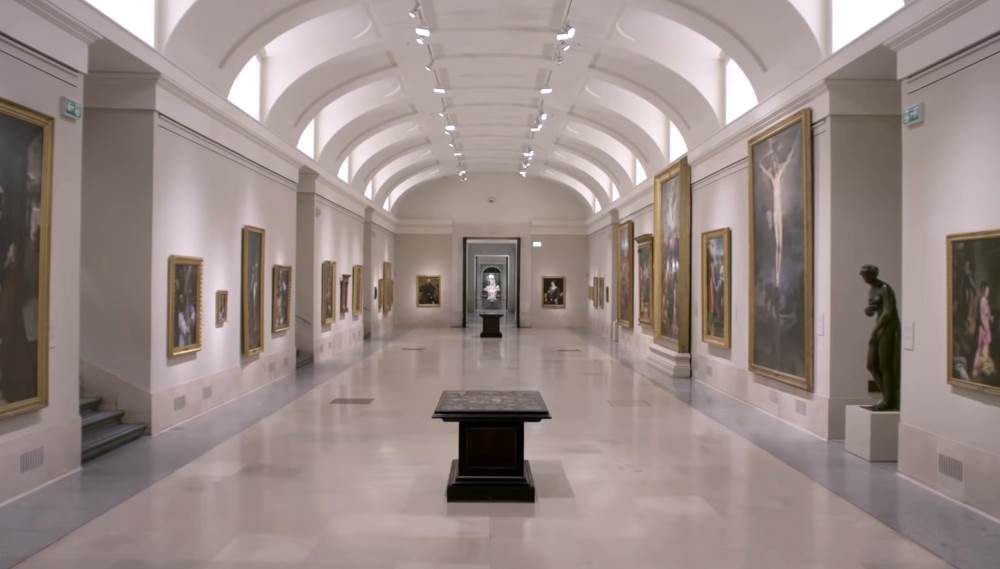 However, even the available exhibits cannot be viewed in one visit. How not miss the most famous and interesting?

A pleasant gift awaits each visitor at the entrance – a map showing the most famous masterpieces of art recommended for viewing. A total of 15 paintings are listed there. But there are several works of painting that attract whole crowds of connoisseurs of beauty. 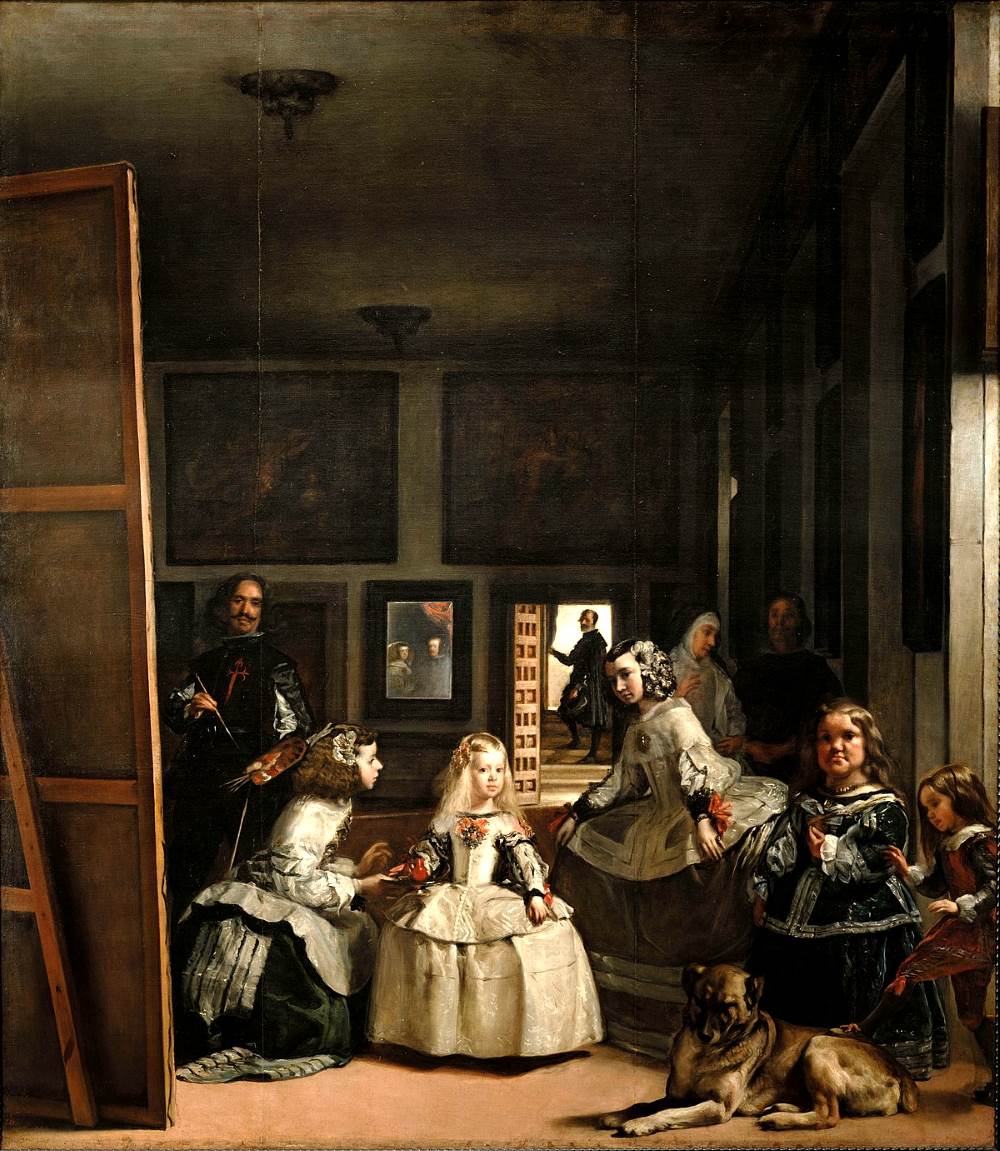 Translated from Spanish, this word means “maid of honor”. Another name for the painting is “The Family of Philip IV”.

The canvas attracts attention with the complexity of the composition and the hidden meaning. The viewer sees the moment of painting a portrait of the King of Spain and his wife. The process is watched by their daughter Margarita Teresa, surrounded by maids of honor.

The ruling couple is almost left behind the scenes, they are shown schematically, as a reflection of a mirror hanging on the wall. The little Infanta with her retinue, on the contrary, is in the center and radiates a silvery radiance and light.

The maestro himself is also present in the picture. In those years, drawing was not recognized as an art, it was a craft. But Velazquez managed to become a court painter, so his figure on the canvas testifies to his high status.

El Greco “Adoration of the Shepherds” 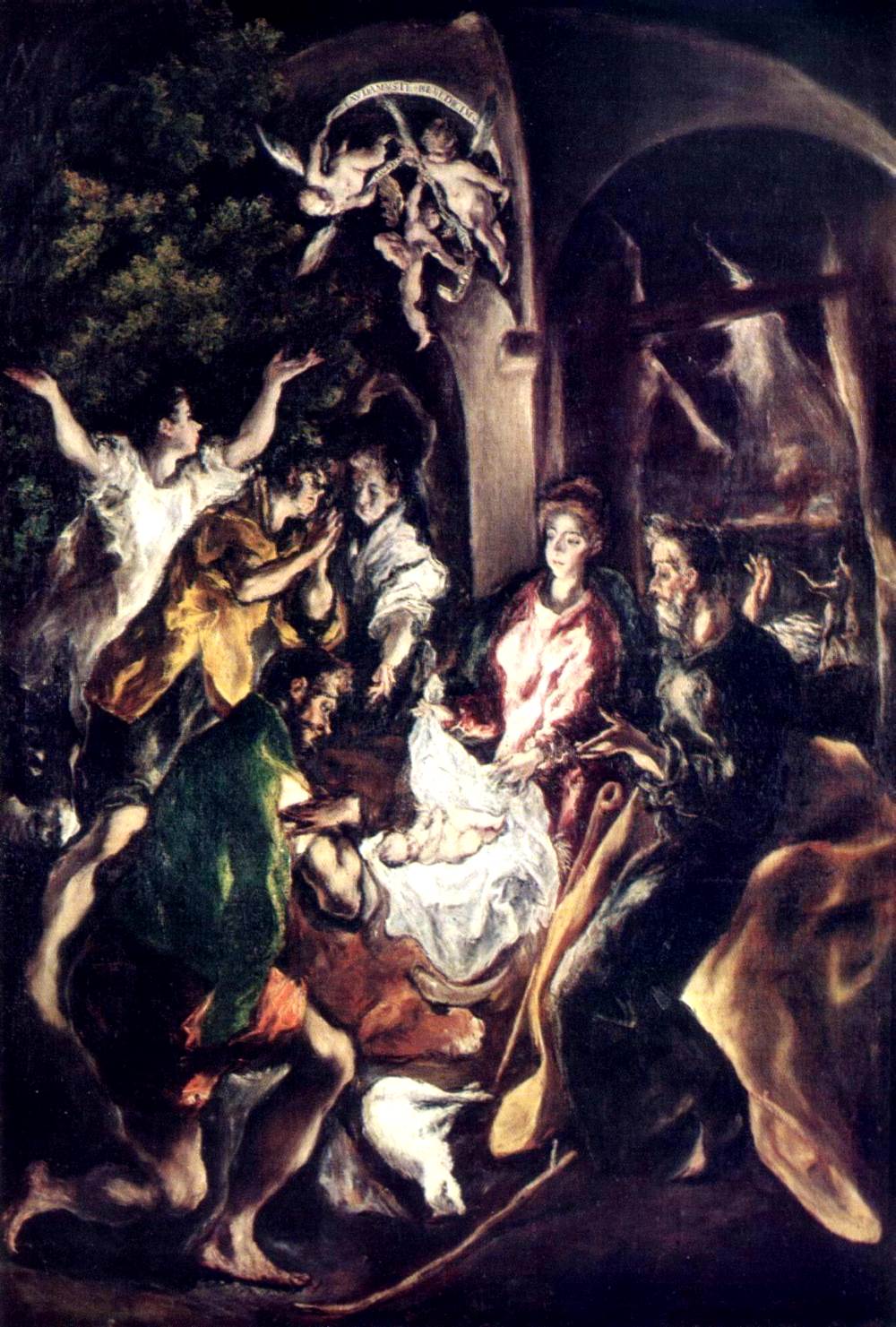 El Greco was a very religious man, so biblical stories are central to his work. The Adoration of the Shepherds was written to order for the most ancient monastery in Toledo. The painting is executed in gloomy colors typical for the last creative stage of the author.

But the magical light that surrounds the baby with the Virgin Mary not only illuminates the cave with the shepherds, it is also transmitted to the viewer. The angels hovering over the newborn are sad. Their presence emphasizes the divine destiny of the child, but they already know his fate. This painting was the last in the career of El Greco.

There is a version that he immortalized himself in the image of a shepherd on his knees.

Undoubtedly this is a must-see canvas in the Prado Museum.

Francisco Goya “Portrait of the Family of Charles IV” 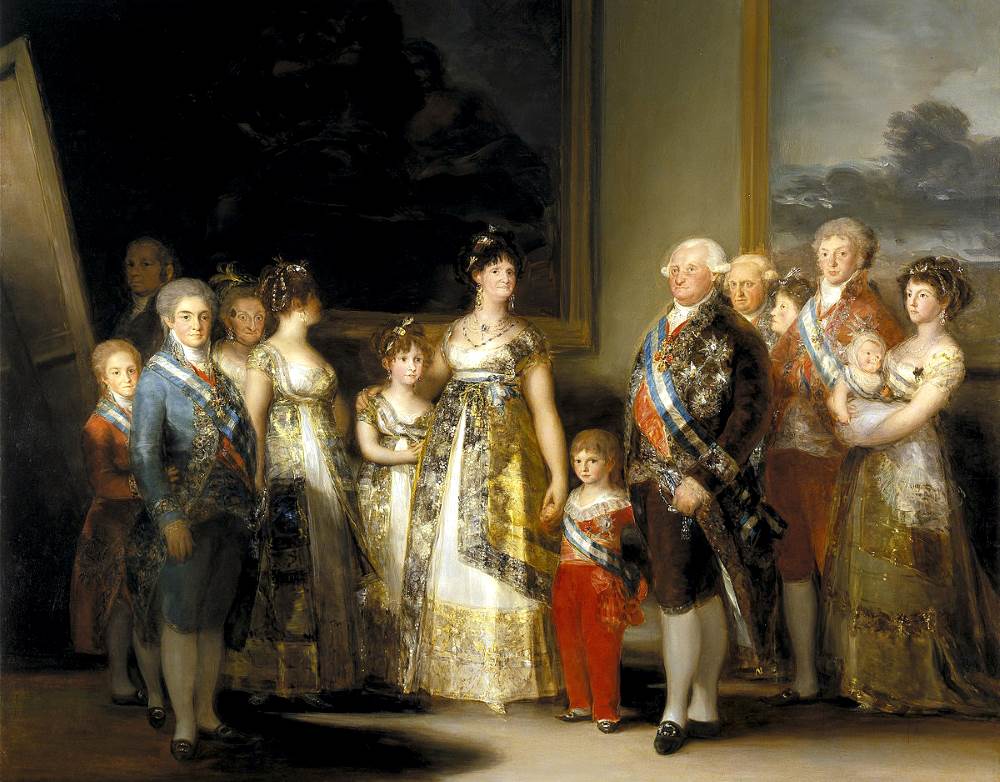 Visitors to the Prado Museum in Madrid are attracted to this canvas for two reasons. The royal family is dressed in costumes striking in their luxury, which can be viewed endlessly.

At the same time, the picture clearly shows a psychological portrait of each family member and their relationship with each other.

In fact, he was not an ambitious person, constantly withdrawing himself from governing the country, and in recent years he completely transferred the reins of power to his wife’s favorite. The royal family, having received the job, did not express any emotions and did not make any more orders to Goya. 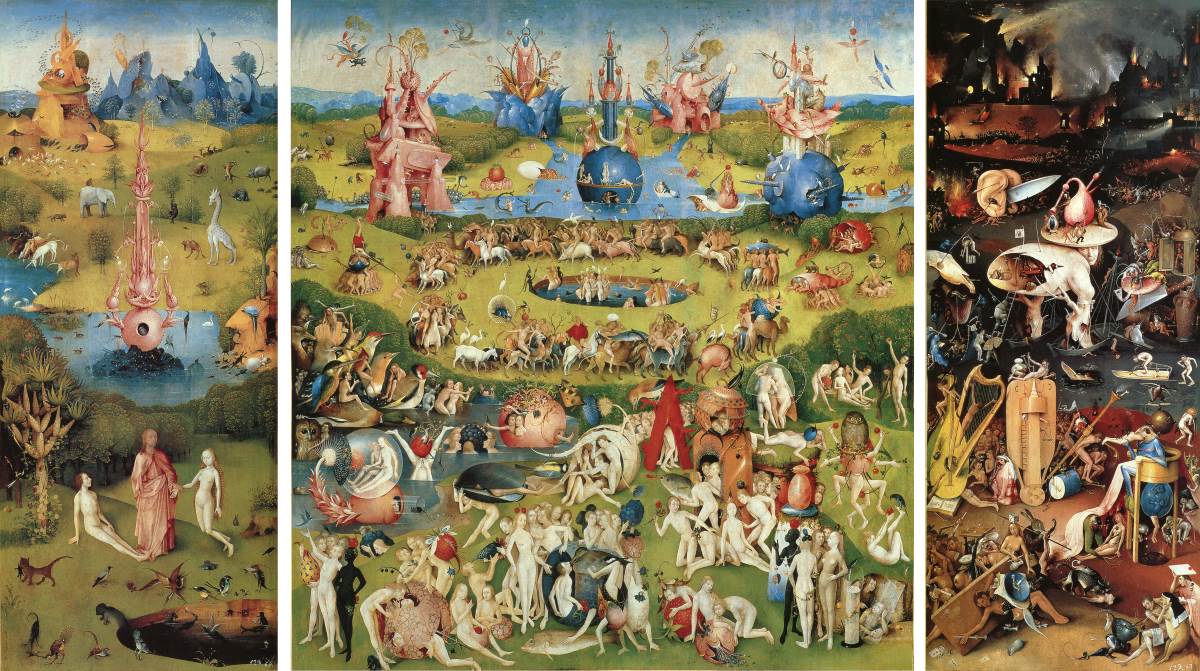 The famous triptych from the Prado Museum in Madrid attracts attention with its many figures, unusual structures, and the smallest details.

Ugly musical instruments evoke thoughts of hell. Throughout the 20th century, experts argue about the meaning inherent in the work, but they did not come to a common opinion. 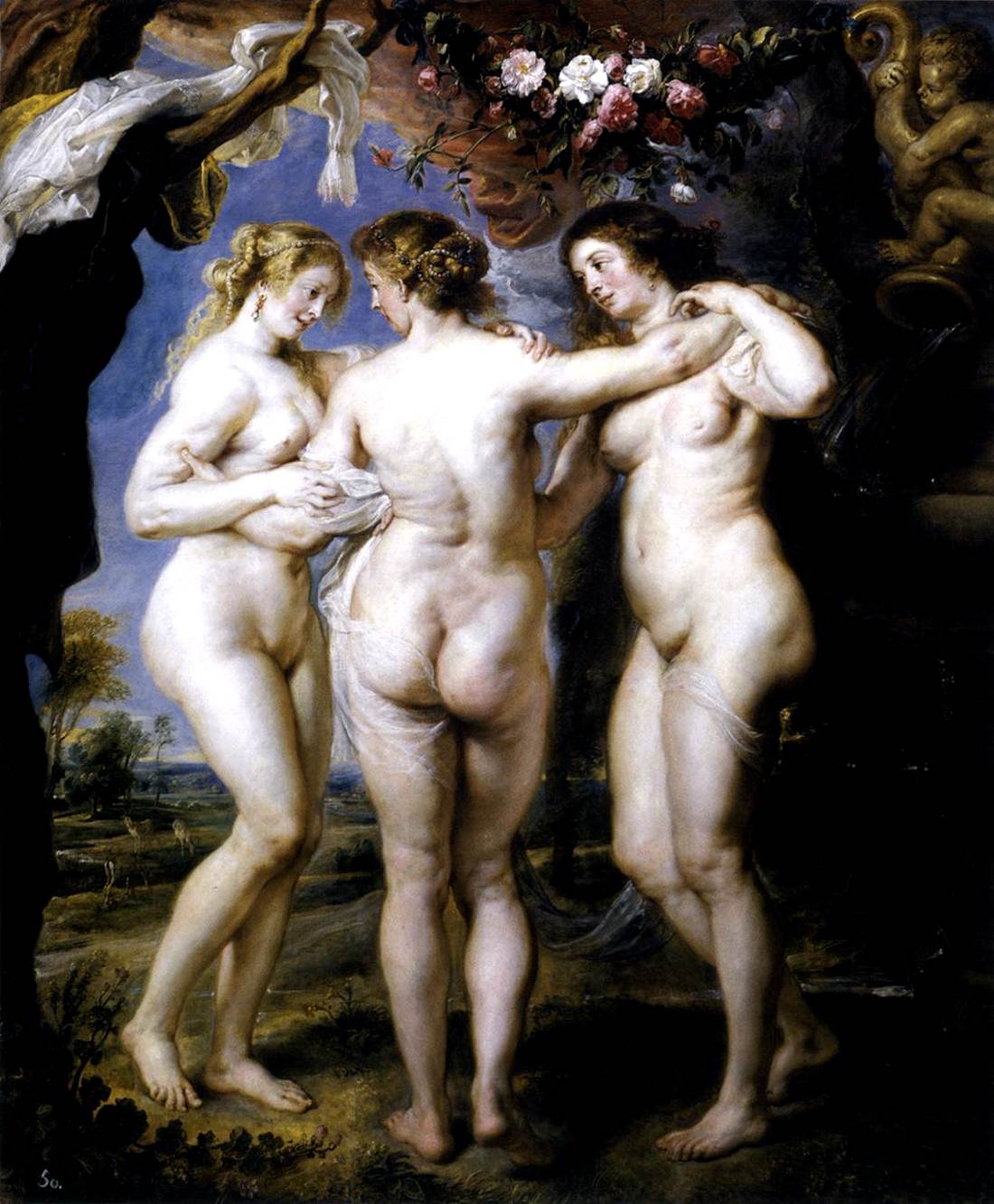 Every person at the word “gracefulness” imagines something light and airy. Seeing the creation of Rubens in the Prado Museum, many viewers cannot hide their surprise. The artist painted people in their natural form, without embellishment, without slipping into vulgarity.

Looking at the dancing ancient goddesses, visitors feel beauty and love. The secret is that one of the graces depicted is the painter’s wife. He had just got married and was enjoying his happiness.