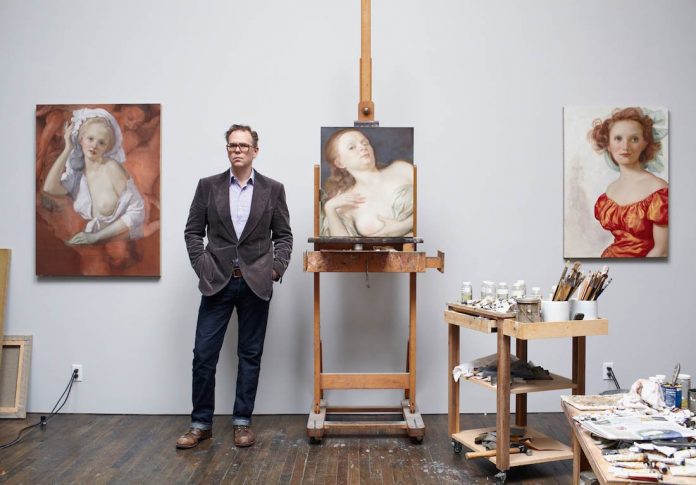 American artist John Currin was born in 1962 in Boulder, Colorado. His work is based on satire with provocatively sexual and social themes. His paintings show the influence of a wide range of themes such as the Renaissance, popular magazines, contemporary fashion, and models.
In the ranking of the British newspaper The Times – rating 200 best artists of the twentieth century – he took 196th place. J. Currin first took private lessons in painting, then studied at Carnegie Mellon University in Pittsburgh (graduated in 1984) and at Yale University (graduated in 1986). The first large exhibition of the artist’s work took place in New York in 1989 and was a series of portraits of girls based on photographs from Carrin’s university albums. In the 90s he creates works with obvious political overtones. During these years the artist also cooperates with the magazines “Cosmopolitan” and “Playboy”. 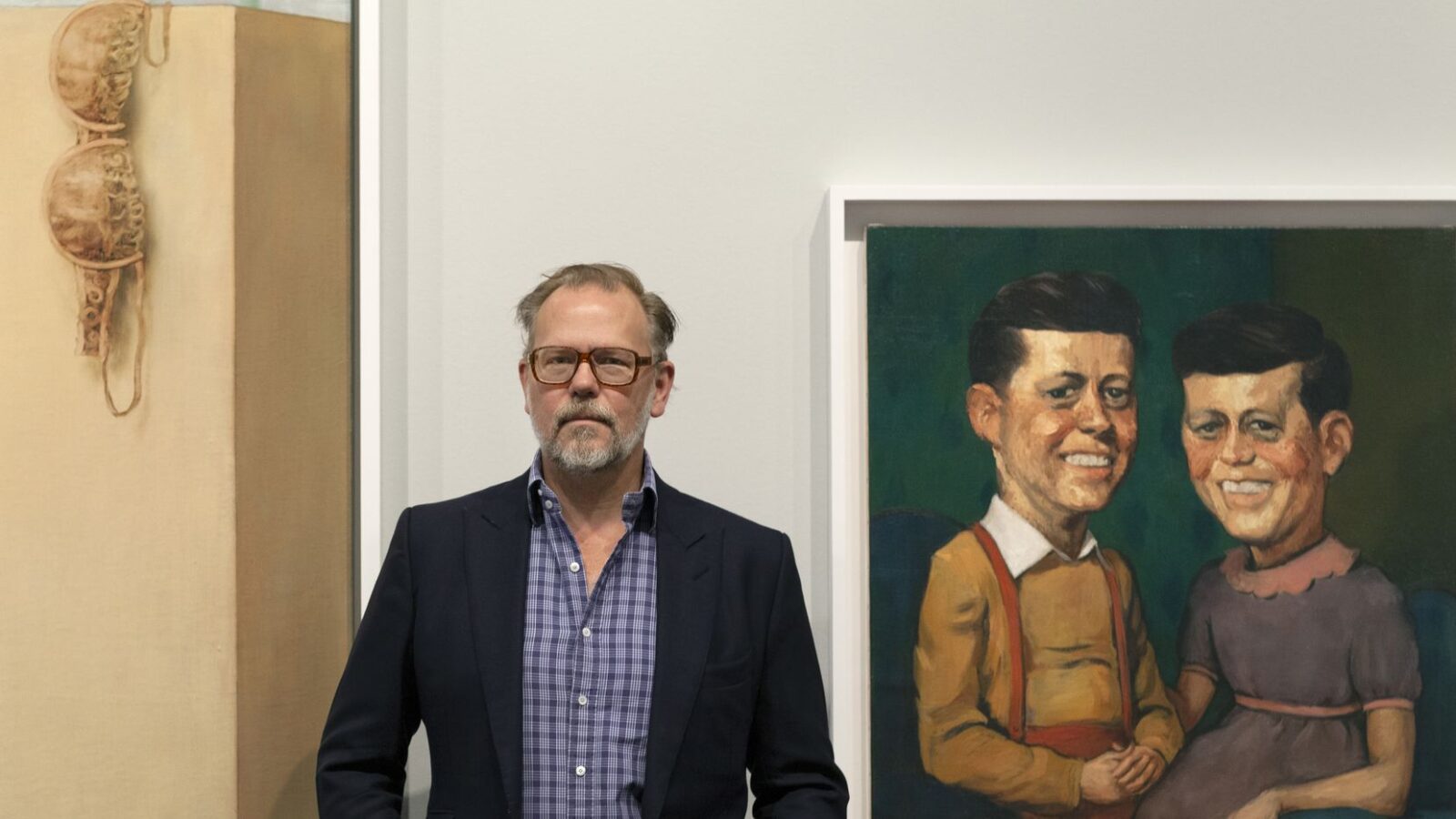 Currently, J. Currin lives with his wife in New York City. J. Currin is a representative of figurative painting. His artistic style is similar to that of Renaissance paintings; especially they are close to some of the paintings by Lucas Cranach the Elder. One of the features of J. Currin’s paintings is the grotesque depiction of various parts of the human body (for example, “Miss Omni”, 1993, Andrea Rosen Gallery, New York). The works of the artist can be found in the Whitney Museum of American Art, Smithsonian Institution museums, Tate Gallery.

In November 2008, at Sotheby’s auction painting by Currin “Nice `n Easy” was sold for $5,458,500 with an estimate of 3.5-4.5 million. Painting by Currin appears in public auctions not often. This American artist, known for his grotesque paintings with provocative subjects, is inspired by Renaissance paintings, American magazine illustrations of the 1950s, and photographs of anorexic models.

In a depiction of nude nature, he is just as cruel as Lucian Freud. By the way, according to Currin’s memories, he studied painting as a child under a Soviet immigrant artist. John Kerrin paints pictures that no one can love unequivocally – except perhaps Juggs, a magazine for men. People often consider John Currin’s work to be pornography, not realizing how natural nudity is. You may find it strange and yet when a painter paints a naked woman, it is perfectly natural. If you could visit Currin’s studio and the artist offered to show you his wife naked, or some naked couple, you would find it very strange. But if he showed you a painting of “Rachel and Butterflies” (1999) – a painted canvas depicting his wife (Rachel Feinstein) as naked Faux Flemish, you would obviously look at her in a long thought. In psychology, undressing your wife or girlfriend in front of strangers is a perversion, and in art, it is the study of the figure.

He portrays her in an idealized and otherworldly way. It tells us how expensive it is for Currin to show the face of love. He transforms his marriage partner into the image of the Madonna butterflies, a modern Primavera that gently raises her hand in a gesture of blessing. Depending on how you look at the vessel next to her, Currin has inserted it as a comic hint of sex (a jug), painting (a bottle of linseed oil), or as a gargoyle of dread (an empty vessel).
There is clearly a double standard for showing the human body. You can go to a museum, fully clothed and look at paintings of naked people, but you cannot do the opposite, namely, you cannot go to a museum naked and look at paintings of dressed people. How obscene nudity is in society is just a genre in art.
Before Manet, the image of the nude was with a certain self-deception: a naked woman, but at the same time, not exactly a naked woman – in this way deceived themselves – because she was hidden in mythological clothes. The nude wasn’t just a girl from the street – it was Venus. But Manet made it easy. Olympia wasn’t Venus, she was just a street girl.
Currin, once noted in an interview, “Picasso was perverse when he wrote women. People justify him by talking about the vision of his object on three sides and so on, but it always seemed to me that he paid much more attention to the observation of the asses and breasts. Picasso, even after he gave up Cubism, he still continued to paint nudity in the foreground. The metaphor was not dominant, there was complete sexual domination.” But if this is true if the abstractions of Cubism could express a desire for sexual domination, what makes Currin’s expressionism strange?

Even when he paints relatively modest paintings – suffering from a lack of appetite “ladies who eat breakfast” and heavy nurses, critics consider them immoral, branded his “obscene” work, “phallocentric”, “incurably cynical,” and “classist”. Writing about his exhibition in 1992, Kim Levin urged readers to “Boycott this exhibition.” “To a certain extent, painting can be considered an immoral act,” said Currin. Without a doubt, this is especially true for nudity, which – because of the nature of the desires that arise when you see a naked body – becomes psychopathia sexualis in painting.

“Bea Arthur Naked” (1991), for example, preserves the inherent viciousness of nudity, as we are offered a ruthless act gerontophilia, undressing an elderly woman and showing her naked to strangers. Still, if you look at the painting as a kind of artist’s bet to try to paint nudity that has no direct connection between sexual desire and visual image – assuming that the artist does not provide us with a secret fetish for a lush TV star – this will become what nudity is – nudity morality. Or is it just a joke about the concept of naked morality? After all, what kind of chastity or ethics can there be in the work of a painter who paints extremely exaggerated breasts? Isn’t it the insistent sexual engine that bloats up in a painting like “Dogwood” (1997)? Technically, you can seem more naked in your clothes than without them.

In any case, large breasts here serve the same function as extended arms, unusually curved legs, or other features of anatomy: they emphasize the fiction and unnaturalness of paintings. They are the hand of an artist who shows the female body at the same time, but they are also visual analogues of the feeling of awkwardness.

Admit that an artist is a man and that as a man he naturally likes to write a woman’s body. On the other hand, he is also the man of his time, and for this reason, he cannot but admit that women – in many cases, higher-level dealers and magazine editors, for example – will be the viewers of his paintings. Consequently, the situation opposing the artist is: how to portray the female body as acceptable to female viewers? If you know in advance who your audience is, how will this affect your paintings? Can’t it make you feel uncomfortable? In a sense, it’s a delicate situation that should happen when you decide to paint your wife naked. You still have to live with her after. What if she doesn’t understand that? Will she be able to give her assessment of your aesthetic goals from her own natural desire to be written exaggerated? What do you choose – artistic honesty? Inner happiness? Or, perhaps both? Or will you give up this idea?

In fact, it is more a question of the artist’s individual soul than of the perverted paradoxes of the genre. Manet, for example, showed the nudity also openly, but it is Currin who shows her psychopathology, the strange reflection in the art that you cannot see in reality. No painting shows any inconsistency better than “The Wizard” (1994), in which a man wearing dark gloves put his hands on a rather large chest of a woman.

Both figures with their eyes closed as if something fabulous had already happened. Nevertheless, is this man really a wizard? Did he use magic by hypnotizing a woman? Why did Currin draw our attention to the contrast of black gloves by placing them against white breasts, because these gloves force the wizard to touch without feeling? A wizard is both bigger and smaller than a man: bigger because he is able to turn his fantasies into reality, and smaller because without the ability to see and contact he is unable to enjoy it. And in this sense, painting is an allegory of nudity, because this is the position of an artist – he can understand, paint, but not enjoy his fantasy.

John Currin’s art is based on a wide range of cultural influences including the Northern Renaissance (Lucas Cranach, Dürer), 50’s advertising campaigns, modern posters, and photos in glossy magazines. He takes the finished image and plays it for his own pleasure. He gets very curious pieces in which critics catch satire on modern American society. Maybe so, or maybe he just likes to improvise on a given topic, as jazz musicians do. Currin uses pastel colors and generously puts gold in his paintings and characters.

Attitudes towards the artist are varied, both in America and abroad, some consider his paintings kitsch, while others consider his high art to be modern Botticelli.

His first exhibition was held in New York in 1989, then he exhibited at the Venice Biennale and in London. In total, he had 20 solo exhibitions in the USA and England. In 2003, Kerrin received a retrospective at the Museum of Modern Art in Chicago.