Home Art market Leonardo’s ‘Lost Masterpiece’ – Was It Ever Painted? 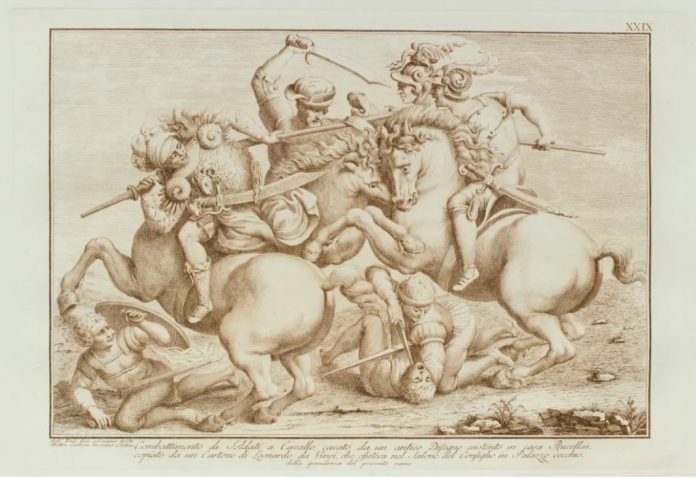 Scientists have been trying for years to find Leonardo da Vinci’s “lost masterpiece”, but now a number of experts confidently claim that the search will not succeed, because the work does not exist at all. Four Italian art historians have presented in Uffizi Gallery the research according to which the fresco “The Battle of Anghiari” is not hidden on a wall of Florentine old town hall Palazzo Vecchio. Their statement contradicts the results of years of work of the researcher Maurizio Seracini. He advocates a high-tech scientific analysis that is expected to reveal the presence of the painting.

The key argument, which is now presented by four experts, was Leonardo’s preparatory technique. They say that when creating the fresco in 1503 the artist used a layer of oil, which did not hold the paint.

“This technology was considered part of the painting, but in fact was only a preparation for painting the wall. Since it was not a success, Leonardo never started to work. This means that the “Battle” existed only in the form of preparatory cardboard, not a ready-made fresco,” said art historian Francesca Fiorani. Next month her book “Drawing the Shadows: How Science Has taught Leonardo painting” will be published, containing a detailed background to the painting.

Scientists also carefully studied the traces of pigments on the wall of the Palazzo Vecchio. According to them, we can assume that there once was some image, but its author was not necessarily Leonardo. About ten years ago Seracini and his supporters repeatedly stated that the black pigment found there corresponds to what is in the “Mona Lisa”, whose attribution is beyond doubt. But opponents claim that such dyes were widely used at that time, so it is impossible to prove that the traces belong to the Battle of Anghiari.

The general public became interested in the possible location of the Battle of AnghiariAnghiari in 2002 when Serachini discovered a cavity behind Giorgio Vasari’s painting The Battle of Marciano and suggested that there might have been a fresco by Leonardo. The scientist used sophisticated technology to try to “see” what was underneath Vasari’s work.

Some claimed that Serachini could cause serious damage to ancient architecture and the image on the wall, although the researcher tried to prove that his methods were “non-invasive”. But local politicians and the public were opposed to the project, which received wide publicity in the world media and generous funding from organizations such as National Geographic. In 2012, authorities denied the request to perforate the painting, and the research was suspended.

Evidence of what Leonardo’s Battle of Anghiari might look like is a copy of his cardboard (the best, by Rubens, is in the Louvre de Paris, and the engraving by Gerard Edelinck from his drawing is in the Royal Academy in London). The artist created an intersecting composition of crossed swords, horses standing on their heads, and biting each other, as well as angry and dying warriors. The plot was the historic battle of 1440 during the Lombard Wars, in which the Florentines defeated the Milanese.

It was the first and only time when Leonardo worked on one project with another great Renaissance artist, Michelangelo. He was commissioned to reproduce on the opposite wall a fragment of another armed conflict – the Battle of Kashin. It seems that neither of them finished the order, but both presented the preparatory cards to the public. Benvenuto Cellini, who saw the works later, called them “a school for the whole world.<br />
Seracini, who began his research on the Battle of Anghiari 45 years ago, said: “It was the highest art form created by the people of the Renaissance. It was admired by leading artists such as Verrocchio and Botticelli”.

Now in the world there are only two dozen paintings attributed to Leonardo da Vinci. And the discovery of the “Battle of Anguiari” could seriously affect our knowledge about the artist. Although today art historians believe that there is too little evidence of a painting, it is unlikely to stop those who are trying to find it.

Thus, Maurizio Seracini plans to continue his research and discover new secrets of the fresco. “What is wrong with looking for an incredible masterpiece and why can’t we get the final answer through science? Why not continue using non-invasive technologies until we have convincing evidence,” he said.

The lost creation of Leonardo da Vinci “Battle of Angiari” may soon be discovered. Professor Maurizio Seracini, who leads the search for the masterpiece, said that with the help of new revolutionary technology intends to establish whether behind the wall of the Florentine Palazzo Vecchio is really a fresco hidden from human eyes since 1563, writes The Daily Telegraph.

Professor Serachini, whose name is mentioned in the “Da Vinci Code” of Dan Brown, has been looking for the “Battle of Angiari” for over 30 years. According to him, the artist and art historian Giorgio Vazari hid the mural specially to save it (the full text is on the site Inopressa.ru).

The order for the “Battle of Angiari” came in 1503, after the Florence ruler Piero di Medici was deposed and the city was immediately declared a republic. As Vazari writes, a commune order was issued according to which Leonardo had to draw something to mark the establishment of republican order. He was allocated a place in “hall of five hundred” Palazzo Vecchio.

Sculptor Benvenuto Cellini called this mural, three times larger than Leonardo’s “Last Supper” in Milan, “an innovative masterpiece. Several preliminary sketches and copies of this work have been preserved. However, in the 60s of the XVI century the Medici returned to power, and Vasari ordered to renovate the hall and paint Leonardo’s fresco. In its place, he created a new fresco – the Battle of Marciano.

Professor Serachini said: “I’m sure that Vasari’s hand wouldn’t have risen to destroy Da Vinci’s beautiful work. Instead, the scientist suggests to preserve the mural, Vazari built a new wall in front of it, leaving a gap of 1-3 centimeters.

As Professor Serachini says, at the very top of his new creation Vazari left a little hint – on one of the banners it is written: “He who seeks, he will find. From the floor level, the banner is invisible. Until recently, it was impossible to “look” behind the second wall.

However, Professor Serachini said that he was going to use “neutron analysis” to detect the paint of a certain color – Vasari and Leonardo used different colors. Leonardo used mineral-based paints, while Vasari painted oil-based paints. The wall will be fired at by neutrons, and the reflected rays will show if there is any paint on the back wall.

The device, specially created on Serachini’s order, costs 900 thousand dollars, and the whole project cost 1 million 500 thousand dollars – these expenses were covered by Loel Guinness, a descendant of the brewers’ family.

The works will begin in October and will be completed in January. “Leonardo kept many lists. We know the chemical composition of his paints. It is necessary to find a paint of a thick blue color, made on the basis of lapis-lazuli,” – says Professor Serachini.

Among the most famous discoveries of this researcher is the discovery of another artist’s hand in Da Vinci’s The Worship of the Magi.