Home Art market Michelangelo from under the sofa: unpredictable findings of great art 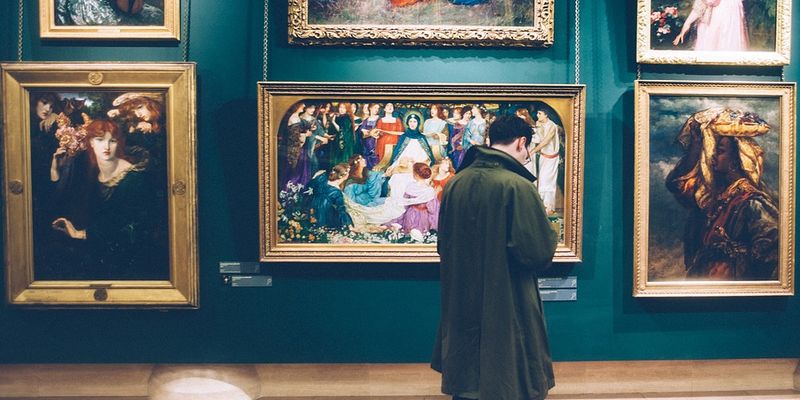 If you find an unknown painting or drawing while cleaning, do not hurry to throw it away. It is quite possible that a masterpiece of the great master lost a long time ago was in your hands.

In the 30s of the XX century in the Van Gogh Museum in Amsterdam twice visited an elderly couple with an unsightly picture in green tones. The couple insisted that a rather large canvas in a shabby wooden frame is an unknown work of the great Dutch artist called “Sunset”.

Both times, Van Gogh’s experts on canvases swept away from the old men, referring to the fact that their “masterpiece” is just an unskilled imitation of the great master. The proof was that the canvas was not signed and except for the carelessly written on the back of the number “180” had no marks.

But experts were mistaken – “Sunset” really belonged to the brush Van Gogh, and the figure on the back was written by the hand of his brother, Theo, who conducted an inventory of the property of a genius, after his tragic death. Theo survived his brother only for a few months, after which the painting passed to his wife, who, needing money, sold it in 1901 to an unknown connoisseur.

After that, the canvas changed the owner many times, and no one doubted its authenticity. But, one day, the next owners praised the painting to their friend, the French ambassador in Sweden. The diplomat, who had a reputation as a specialist in painting, convinced everyone that they are the owner of a fake, and the painting was in the attic.

After the death of the owners of “Sunset”, their heirs again tried to convince art historians of its authenticity and again failed. Only in 2013, the painting “Sunset in Monmajour” (such its full name), was officially recognized and took an honorary place in the Van Gogh Museum in Amsterdam.

A few years ago, in an abandoned apartment located in the heart of Paris, it was found a whole collection of paintings of the XIX century. Nobody entered the room for more than 70 years, as the owner left France on the eve of World War II and never returned home.

When it became known that the owner of the property died in a foreign country, the lawyer gave the keys to the apartment to the heirs who did not expect to find many valuable works of art in a dusty, cobweb-shaped home.

The most significant painting from the abandoned apartment was a beautiful portrait of a woman created by Giovanni Boldini, the late 19th century impressionist. Experts estimated the painting at 300 thousand dollars, but at the auction an unknown connoisseur bought it for 2.1 million dollars.

Michelangelo from under the sofa

Once an American military pensioner, Martin Cober went for some reason under his sofa, were among the old wrappers and dry spiders found Michelangelo’s painting “Madonna, mourning Christ. Former military pilot, who had visited dozens of countries, and could not remember from which business trip he brought the canvas.

It is known that at one time the painting was hanging on the wall until Martin’s son hit it with a tennis ball. After that, the decorative element from sin was hidden away under the sofa and gradually forgotten about it. No one could think that the canvas is real and, despite the fact that the Renaissance master did not complete it, is worth millions of dollars.

The found Savior of the World

Dozens of Michelangelo’s paintings and more than a hundred of Raphael’s paintings are kept in private collections and museums around the world. But the genius Leonardo da Vinci, though he gave the world a lot, but left only a few paintings. By various estimates, there are 15 or 17 paintings of the great Leonardo, and the location of some of them is not known.

Canvas “Savior of the world” was not among the “living” works of the great painter, as it was considered irrevocably lost. The last mention of the painting was found in documents of the XVII century, after which traces of it were lost. Such paintings of the Italian as “Monna Vanna”, which was a nude version of “Monna Lisa” and “Battle of Anghiari” were destroyed, and “Savior of the world” just disappeared, as if it was not.

Found “Savior” quite accidentally, at the restoration of the painting, which all considered a good fake Salvatore Mundi canvas. Dark, badly damaged painting work was purchased by several businessmen at an auction for a ridiculous price and was given to the restorers for cleaning from dirt and soot. 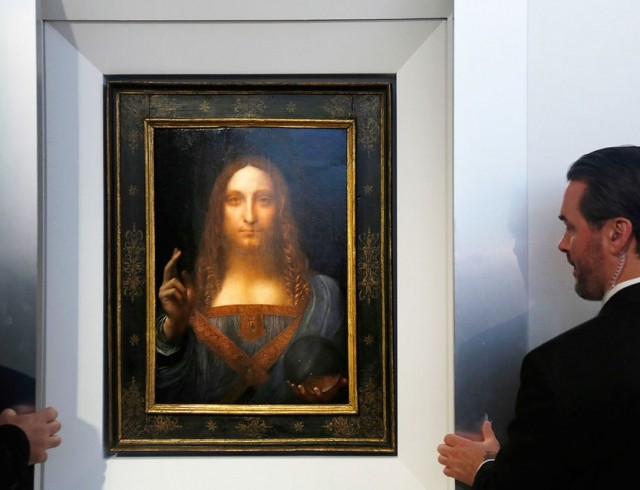 Like all Leonardo’s paintings, “Savior of the World” isn’t too large-scale. 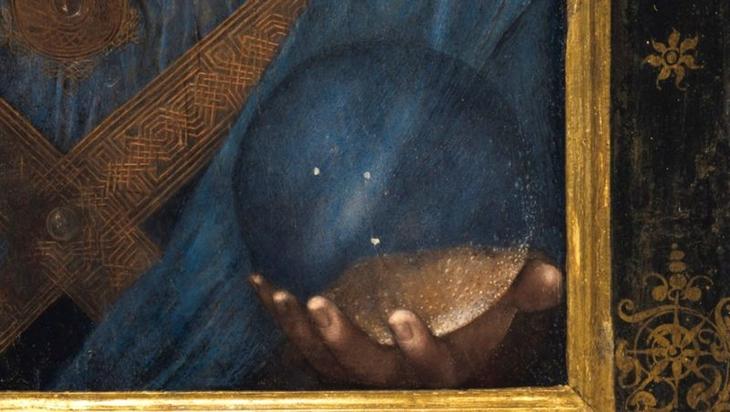 The restorers of the paintings were astonished when they found a surprisingly finely drawn glass ball in Jesus’ hand under the layers of dirt, through which Leonardo’s hand was unmistakably identified. Now “Savior of the world”, which could well hang somewhere in the hotel lobby or in the staircase of a large office, is one of the most expensive paintings on the planet, for which at the auction gave 450 million dollars.