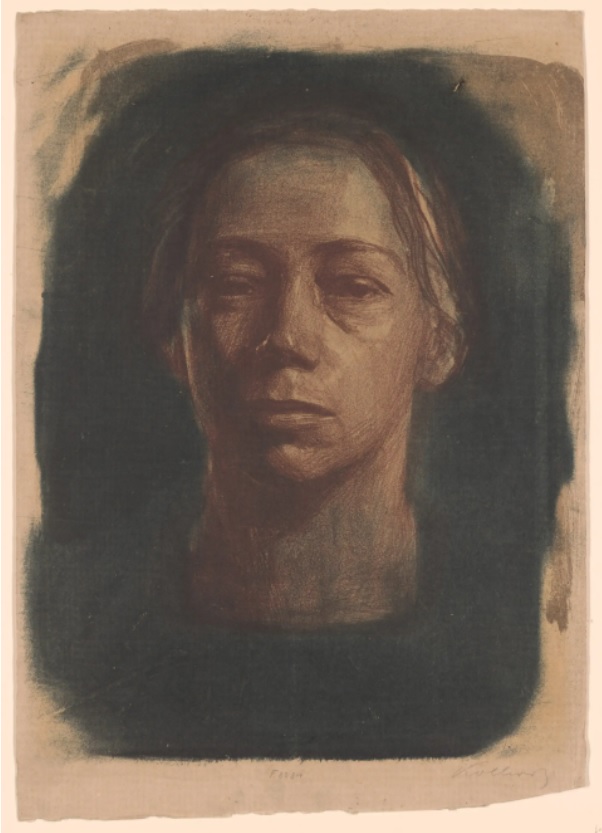 The Museum of Modern Art (MoMA) in New York and the Neue Galerie, the institution championing early 20th century German and Austrian art, have jointly acquired a 1904 self-portrait by the German artist Käthe Kollwitz, known for her visceral and psychologically complex portrayals of her subjects, especially those suffering from acute poverty and hunger between the two World Wars.

The assertive lithograph Self-portrait en face was made when Kollwitz was 37-years-old and already very successful. It is one of 12 known impressions Kollwitz made of the work in various colour variations, this one with a red-brown crayon outline framed by a dark blue background. It is noted as one of the last pieces the artist made in colour, as she began restricting her palette to black and white in 1905.

The work complements 34 prints by Kollwitz in MoMA’s collection and has been installed in the fifth-floor collection galleries at the museum alongside the German artist Paula Modersohn-Becker’s Self-Portrait with Two Flowers in Her Raised Left Hand (1907), which was also jointly acquired by the institutions in 2017.

“Käthe Kollwitz’s legacy looms large over the 20th and 21st centuries,” says Christophe Cherix, MoMA’s chief curator of drawings and prints. The work is “both a monument in the history of printmaking and a work that speaks as much to its time as ours”.

The acquisition foreshadows a major survey exhibition of Kollwitz’s work due to be announced in the coming months, which follows an expansive exhibition devoted to the artist at the Getty Center in Los Angeles in 2019-20.

Kollwitz was born in 1867 in the Prussian city of Königsberg in present-day Russia, and died in 1945 in Moritzburg, Germany. While she is best-known for her stark and mostly monochromatic portrayals of class warfare and political upheaval, she made self-portraits throughout her life, a practice she said offered “an opportunity to interrogate and examine one’s own person, [and] to fulfill a deep-seated need to come to term with oneself”.