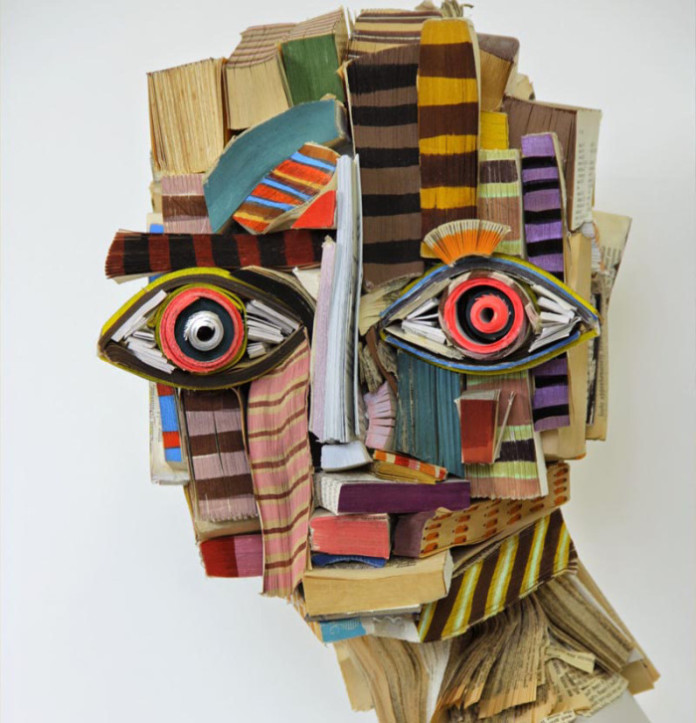 I’m not sure if it’s because it’s Fashion Week here in NYC, or because the fall season has begun bringing with it a new crop of looks, or maybe I just hadn’t strolled down Madison Avenue in a while but, when I did yesterday afternoon I was really struck by all the store windows, both in their content and their display design. Barney’s had a series of rotating photos by Bruce Weber titledL.A. Stories; another store whose name escapes me was setting up neon signage along with what seemed to be an outdoor runway, but the windows that stopped me in my tracks were those of Hermès. The mannequin heads were these spectacular sculptures which at first glance looked like blocks of painted wood, but as I got closer I realized that they were actually books. Books! Rolled, fanned, stacked, bent, not only were the mannequin heads stunning (possibly the most fabulous part of the general fabulosity), but the backdrops as well were intricate tableaus created using the edges of books, painted in colors and stripes, in some cases just as multicolor striped motif backdrop while in others 2-dimensional mythical gods. I went in to ask who the artist was and should have recognized the name right away, having posted NYC-born and based artist Nick Georgiou’s work before. Seeing them in person, however, is even more impressive. Kudos to whoever thought to give the job to Georgiou, and of course kudos to the artist himself for making an impressive splash on Upper Mad, specifically at the corner of 62nd Street.

Houston Looks to Mexico for Artists and Art