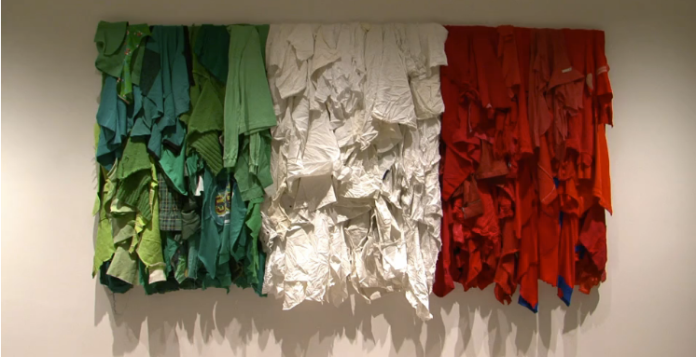 For several years, Nancy Olnick and Giorgio Spanu have quietly accumulated a 400-piece collection of postwar Italian art from a movement known as Arte Povera. Now the husband-and-wife team are on the verge of opening a 20,000-square-foot private exhibition space in the Hudson Valley town of Cold Spring, N.Y.,  to showcase their collection.

“The only drawback to collecting Arte Povera is that much of the work is huge in scale and certainly cannot be shown in a house made of glass walls,” Nancy Olnick wrote in a statement on their website. “This led us to look for an appropriate space to display the artwork.”

Art Povera is a conceptual artistic movement that began in Italy in the mid-1960s and lasted until the early 1970s. It translates literally as “poor art,” not because of the poverty of its practitioners, but rather because of the artists’ use of nontraditional materials such as textiles, wood, and even dirt.

Citing the fact that the Cold Spring building isn’t close enough to completion, no one from the Olnick Spanu collection was willing to comment for this article. A representative, however, provided some insight into the collection. It includes works from stars like Alighiero Boetti, who was the subject of a solo show in 2012 at New York’s Museum of Modern Art; Jannis Kounellis, whose show last year at Gavin Brown’s Enterprise included 12 live horses; and Giuseppe Penone, whose large-scale works filled the formal gardens and interiors of the Palace of Versailles in 2013.

These artists, along with most of Arte Povera’s leading figures, have also been the subject of a recent price surge in the art market. Last year, Penone’s art hit a record at auction—$1.325 million at Phillips New York, according to Artnet. Kounellis’s art hit its peak in 2014, when a metal, vegetable fiber, and wool artwork sold for $2 million (above a high estimate of $988,000) at Christie’s in London. Boetti’s record was set the same year when his 1968 Colonna, a column made out of paper doilies, sold for just under $4 million at Christie’s London. In other words, this is a very valuable collection.

The Olnick Spanu collection hasn’t publicly announced the Cold Spring space, so it’s unclear whether it will be open to the public, whether admission will be free, and what, if anything, prospective visitors will have to do to get inside. On Olnick Spanu’s website, Nancy Olnick’s statement offers a clue: “It is our mission to be able to share our experience and education with family, friends, and an interested audience who may not be familiar with the power of Italian Art,” she wrote.

The phenomenon of wealthy collectors founding their own exhibition spaces has been well-documented, but what sets this collection apart is its anonymity—Olnick and Spanu don’t appear on the Artnet Top 100 Collectors List, generally a comprehensive roundup of the art world’s upper crust. Plus, while many collectors open private museums as a tax write-off, the Olnick Spanu collection does not have nonprofit status.

Compare that with arts organizations such as the Hall Art Foundation, the Brant Foundation Art Study Center, and the Glenstone museum, the latter of which was founded by the billionaires Mitchell and Emily Rales. “You can donate into a foundation, a foundation manages the art, a foundation has the ability to accept grants and charitable donations, and a foundation generates revenue off of the art which has a further tax write-off,” said Evan Beard, the national art services executive for U.S. Trust. “It’s a very good tool.”

Olnick and Spanu aren’t complete unknowns in the art world—this year they’re celebrating the 10-year anniversary of their art program, an initiative where Italian artists are invited to the family’s Alberto Campo Baeza-designed home in the Hudson Valley to create site-specific works. They’ve also spoken publicly about their 500-piece Murano glass collection, which was the subject of a solo exhibition at New York’s American Craft Museum (now the Museum of Arts and Design) in 2000. (The couple appeared in a Sept. 17, 2000, article about their glass collection in the New York Times, which mentioned an art collection with works by Warhol, Lichtenstein, Matisse, Picasso, and others.)

How to live the good life. (Even if it’s vicariously.)
Get our weekly Pursuits newsletter.

Spanu, who is Italian, was formerly a marketing and software executive; Olnick, who is from Manhattan, is the daughter of the late real estate developer Robert S. Olnick. The Olnick Organization’s current portfolio contains more than a dozen buildings, including the 141,000-square-foot 130 Fifth Ave. in the Flatiron district; 270 Lafayette St., a 207,000-square-foot building in the heart of SoHo; and the 1,700-apartment Gateway Plaza, which the Olnick Organization developed alongside the Fisher and LeFrak families.

There isn’t an official completion date for the exhibition space, so for the moment the art world (and the town of Cold Spring) will have to wait for a statement from the collection. In the meantime, the Hudson Valley is turning into a contemporary art mecca; Dia:Beacon is just a 12-minute drive from Cold Spring, and Storm King Art Center, the 500-acre sculpture park, is almost directly across the river.

Judd and Malevich Joined Forces At The Exhibition In Zurich