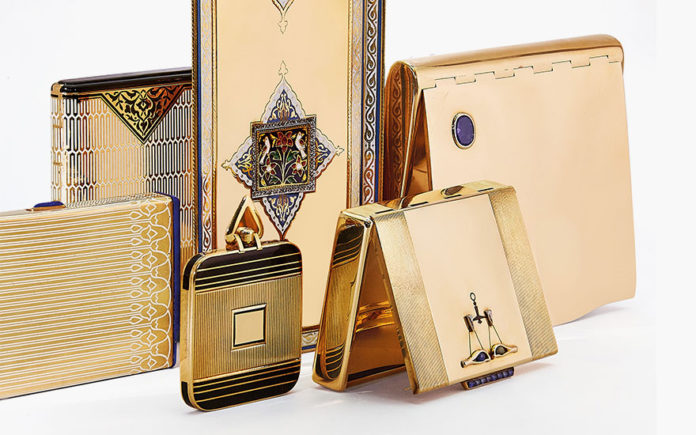 In 1983, Cartier set Eric Nussbaum the task of establishing the finest collection of its vintage jewels in the world. Now, his private collection of Cartier objects and treasured accessories will be offered at Christie’s

‘Éric Nussbaum is incredibly important to the world of jewellery — and particularly Cartier,’ explains specialist Jean-Marc Lunel, introducing a collection of historic importance that is set to be a highlight of Christie’s Magnificent Jewels  sale in Geneva on 17 May.

Known by those in the jewellery business as ‘The Eye’, Éric Nussbaum (1940-2003) first joined Cartier in 1969, beginning what Lunel describes as ‘a long love affair’ with the maison. In 1983, he became the first director of the Cartier Collection — an inventory of some of the finest examples of watches, clocks, jewellery and objets d’art produced by Cartier since its foundation in 1847. The Cartier Collection now consists of around 1,600 pieces.

Nussbaum’s journey began with the Art Deco ‘Shinto Portique’ mystery clock, acquired from Christie’s in 1973 by then Cartier Paris Chairman Robert Hocq (1919-1979). Around the same time, Hans Nadelhoffer (1940-1988), who was Christie’s Geneva President, a renowned Cartier authority and a longtime friend of Éric Nussbaum, published Cartier-Jewelers Extraordinary after three years of research. ‘This magnificent volume became a blueprint for Éric’s epic odyssey,’ recalls Francois Curiel, Chairman of Luxury at Christie’s. Eric Nussbaum, the first director of the Cartier Collection, with the Shinto shrine gate mystery clock, made by Couet for Cartier Paris, 1923. Sold at Christie’s Geneva on 20 November 1973

In just under six years, Éric Nussbaum had achieved the impossible, creating a collection worthy of exhibition at the world’s grandest museums. ‘The Art of Cartier exhibition of 1989 at the Petit Palais in Paris, the first of its kind, was a triumph,’ says Pascale Lepeu, the collection’s current curator. Subsequent exhibitions followed at the Hermitage, the Metropolitan Museum of Art and the British Museum.

‘Éric paved the way for the Cartier Collection to become the gold standard through the years,’ Lepeu continues. ‘Since 2003, monographic exhibitions have been held in 21 internationally renowned museums, including the Kremlin, the Forbidden City of Beijing, the National Palace in Taipei, the Thyssen-Bornemisza in Madrid and closer to home, the marvellous Baur Foundation. All of these institutions hosted the Collection with great enthusiasm, and received unprecedented numbers of visitors.’

Nussbaum spent two decades travelling the world, sourcing more than 1,200 exceptional pieces that celebrate the breadth of Cartier’s heritage. As a passionate collector, he also built his own private collection — from which a selection of more than 100 vintage pearls, gemstones, delicate jewels, timepieces, bejewelled boxes, objects of vertu and a remarkable variety of cufflinks will be sold live at Christie’s in Geneva, and in a later online sale. Here, Jean-Marc Lunel selects his highlights from a treasure trove of vintage Cartier.

A pair of Art Deco onyx and diamond cufflinks, circa 1925, by Cartier. Each circular onyx panel set to the centre with a rose-cut diamond geometric openwork panel representing the Chinese symbol for longevity, circa 1925, with French assay mark for gold. Estimate: SFr.4,000-6,000. This lot is offered in Magnificent Jewels on 17 May at Christie’s in Geneva

‘These classic Cartier cufflinks are ideal for connoisseurs and first-time buyers alike. The Cartier signature makes them a real collector’s item.

‘It’s unusual to find Cartier pieces that a man can wear every day, particularly in such fantastic condition. Made around 1925, these are an excellent example of Cartier’s Art Deco work, which Nussbaum particularly admired.’

A gentleman’s desk clockOnce wound, it will run for eight days ‘This gentleman’s desk clock is beautifully refined, featuring a railway outline and silver dial, with diamond-set hands. Remarkably, it comes with its original case, which was intended to protect the clock from damage while travelling. Once wound, it will run for eight days.

‘No other jeweller produced as many men’s accessories as Cartier, and Nussbaum’s collection features a number of examples, including cufflinks, pocket watches and accessories for smokers.’ A limited-edition ‘Crash’ wristwatch, 1991, by Cartier. The asymmetrical cream dial with black painted Roman numerals, secret signature at 7 o’clock and blued steel hands, to the polished case and sapphire-set crown, the strap with Cartier deployant clasp, mechanical movement, 1991, case width 25 mm, inner circumference 16.0 cm, with French assay marks for gold. Estimate: SFr.10,000-15,000. This piece is offered in Magnificent Jewels on 17 May at Christie’s in Geneva

‘The Crash is one of Cartier’s most iconic timepieces. It captures the swinging Pop culture of London in the 1960s, which became a visible influence in the art and design of the period.

‘The unique design arose in an unusual way: a client came to Cartier asking to have a watch repaired following a car accident, which had caused the face to warp. Rather than reproduce a classical design, Cartier retained the distorted shape, producing a model that, today, is among its most sought-after.’ A pair of Art Deco enamel cufflinks, circa 1929, by Cartier. Each circular panel terminal with white and black enamel geometric motif, to the black enamel line surround, 1.4 cm, mounted in gold, in black suede Cartier pouch. Estimate: SFr.3,000-4,000. This lot is offered in Magnificent Jewels on 17 May at Christie’s in Geneva

‘The geometric design of these black and white Art Deco enamel cufflinks is timeless — they are miniature artworks bearing the Cartier signature. I could imagine wearing them every day, paired with a classic white shirt.’

‘King Edward VII of England referred to Cartier as “the jeweller of kings and the king of jewellers”, and the brand has a long history of producing designs for celebrities and royalty.

‘This charming stickpin has a rich history — once owned by Empress Maria Feodorovna of Russia, it was later purchased by Hans Nadelhoffer, the former president of Christie’s Geneva, who worked closely with Nussbaum as he built his collection.’

‘Cartier was forever innovating — as this dual-time Tank Cintrée wristwatch demonstrates. Released shortly after the First World War, it was designed for a new, glamorous era of travel, allowing the wearer to read two time zones at once.

‘The Tank became a legendary design, but it was actually conceived by Louis Cartier several years before this watch was released. The designer took inspiration from the arm of a tank that he saw during the war, using the shape to create the watch’s cases.’ An early-20th-century gold and multi-gem cigarette case, circa 1929, by Lavabre for Cartier. Of rectangular outline, the centre applied with an Indian multicoloured motif enhanced with rose-cut diamonds, the outline of similar white and blue enamel Indian design, the push-piece set with sapphires, 10 x 6.4 cm, 163 gr. Estimate: SFr.20,000-30,000. This piece is offered in Magnificent Jewels on 17 May at Christie’s in Geneva

‘This beautiful gold and multi-gem cigarette case is another of the many elegant accessories that Cartier created for men. The intricate enamelled surface indicates the skill of the jeweller who made it, drawing inspiration from traditional Indian patterns.

‘At the time it was made, everybody smoked — in trains, on planes and in cars. For men, a cigarette case became the accessory of choice, valued as much for its artistic quality as its capacity to seduce. I can just imagine a well-dressed man pulling this elegant case out of his pocket and lighting a cigarette. Accessories such as this were often given as gifts by a wife, loved one, parent, or family member, and often come engraved with notes or messages.’

An early-20th-century diamond wristwatch, by Cartier. The square dial with black Roman numerals, blued steel hands, within a diamond-set bezel, to the diamond-set crown and black fabric bracelet, with gold and diamond-set deployant clasp, mechanical movement, circa 1913. Estimate: SFr.8,000-12,000. This piece is offered in Magnificent Jewels on 17 May at Christie’s in Geneva

‘This elegant lady’s watch was made in 1913, and is one of the very first square watches ever produced. It’s an excellent example of Cartier’s early geometric designs, featuring the balanced black and white tones that became characteristic of the period.

‘The wristwatch is also emblematic of Cartier’s innovative spirit. Although Patek Philippe created the first wristwatch in 1868, it was really Louis Cartier’s designs that helped to popularise the design over the pocket watch. Cartier made his first wristwatch just nine years before this example, after his friend, aviation pioneer Alberto Santos-Dumont, requested a design he could use while flying.’