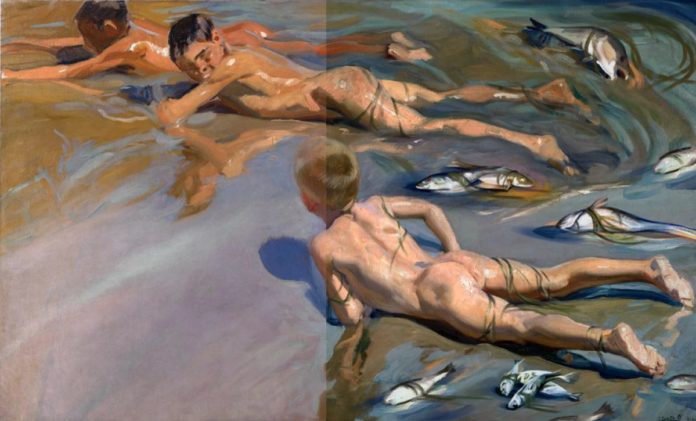 What if the smiling lady in Goya’s pastoral painting was actually a frightened refugee fighting for survival? The Prado Museum in Madrid has teamed up with the World Wildlife Fund (WWF) in a new campaign to mark the 25th Climate Change Conference in the Spanish capital. Four of the museum’s masterpieces have been ‘upgraded’ to post-apocalyptic paintings that reflect potential threats to our changing planet.

The project is called “+1.5ºC Lo Cambia Todo”, which means “+1.5ºC change everything” in Spanish. This joint initiative indicates a global temperature increase and calls on governments to take measures to ensure that it does not rise above 1.5 degrees Celsius.

Museum experts and WWF activists selected four paintings from the Prado collection – “Boys on the Beach” by Joaquín Sorolla, “The Crossing of the Styx” by Joachim Patinir, “Umbrella” by Francisco Goya and “The Equestrian Portrait of Philip IV” by Diego Velázquez. These changes concern sea-level rise, the threat of extinction of entire species, the impact of extreme droughts and social divisions around climate refugees. Four updated images will be posted on billboards throughout the centre of Madrid, and WWF will use them in its digital campaign #LoCambiaTodo.

“This project is an opportunity for the museum to continue putting art and its values at the service of society,” said Javier Solana, President of the Royal Board of Trustees of the museum, in his statement. – The symbolic value of the masterpieces and the impressive artistic rethinking that we are presenting with WWF is a great way to convey to all, and especially to younger generations, what is really at stake in this fight against climate change.

“The 25th Conference will make Madrid a global focus for politicians and the media. That’s why we want to seize the opportunity to send a strong message through a universal language of art,” added Juan Carlos del Olmo, General Secretary of World Wildlife Fund Spain.