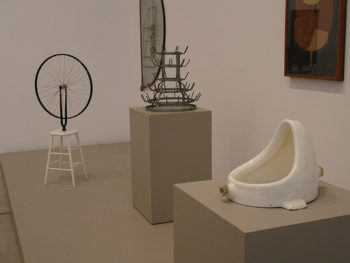 The New York Times reports today that one of the five unique versions of Marcel Duchamp’s Porte-bouteilles(Bottle Rack, or Bottle Dryer)—the first of the artist’s influential pure readymade works—will be available for sale next month at Galerie Thaddaeus Ropac in Paris, part of an exhibition showcasing work from the Robert Rauschenberg Foundation.

The show opens October 20 and will feature Rauchenberg’s 1984 “Salvage” paintings alongside work from Duchamp. The bottle rack is the only Duchamp work for sale in the show, and both the gallery and the foundation declined to reveal the price. They did state, however, that they are only interested in selling to a public museum. The Times notes that the sale of these unique readymades is very rare. Bruno Jaubert, associate director of Impressionist and modern art at Paris auction house Artcurial, told the paper that the piece is “very, very difficult to value.” He estimated that it will fetch somewhere between $8 and $12 million.

The work in question is a version of the readymade created in 1959 as part of the group exhibition “Art and the Found Object” at the Time-Life Reception Center in New York. The original incarnation of the piece dates back to 1914, but was destroyed when Duchamp’s sister mistook it for garbage after the artist left France for America. For the Time-Life exhibition, Duchamp wanted to use the 1935-36 version of the work, owned by the artist Man Ray. Sadly, that piece was lost by Man Ray, who bought a replacement in Paris which was then sent to America and purchased by Rauschenberg. A 1964 edition of eight (plus two proofs) was created under the supervision of Duchamp by Galleria Schwarz in Milan.

“We are selling the Duchamp now because of our upcoming catalogue raisonné project,” said Christy MacLear, chief executive of the Rauschenberg Foundation, told The Times. “Many dealers had expressed interest, including Thaddaeus, and we felt he would represent the Foundation’s interests in placing the work with an important institution.”