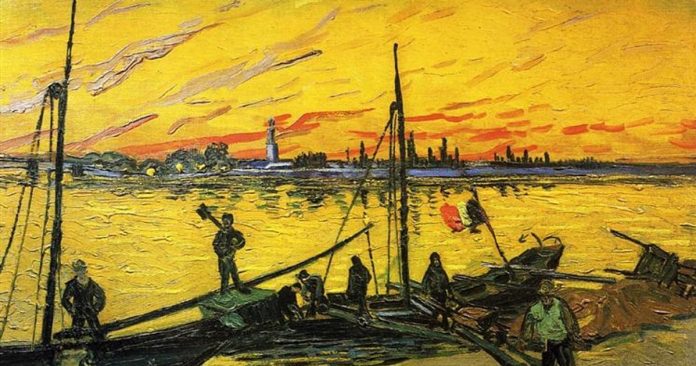 Sheldon Solow, the billionaire New York property developer who died last November, had owned Sandro Botticelli’s Young Man holding a Roundel (about 1475)—which was sold anonymously at Sotheby’s for $92m on 28 January. But he had also amassed other major paintings in his family foundation, including works by Matisse, Miró, Lichtenstein, Basquiat—and Van Gogh. 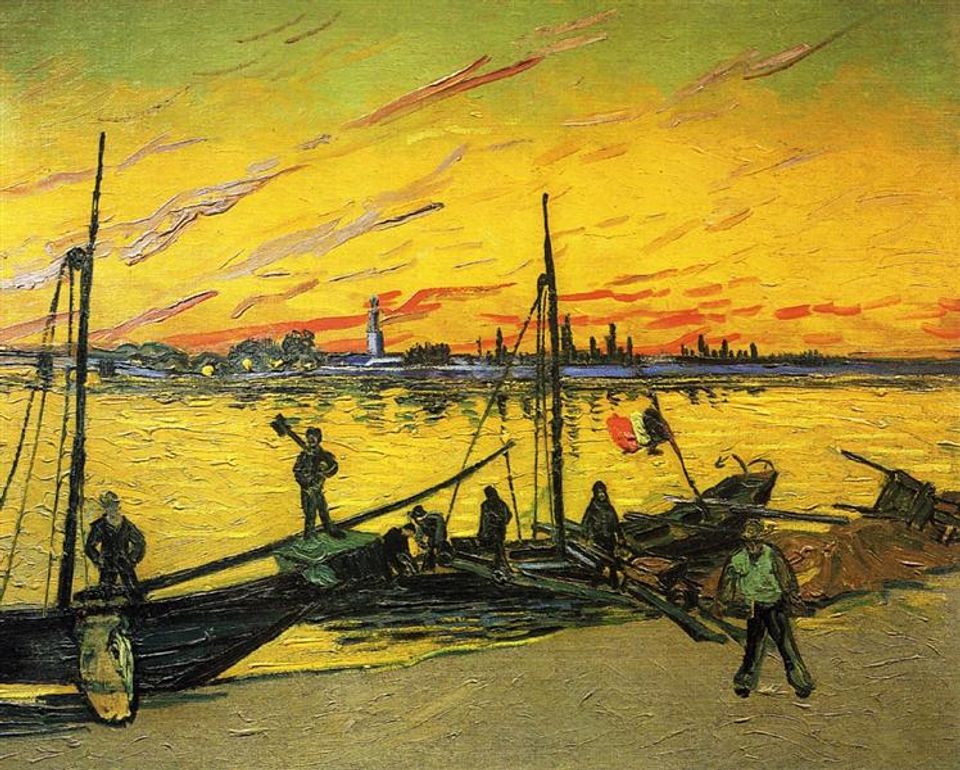 The Solow Van Gogh is an important Arles picture, Barges (or Stevedores, 1888). It had previously been owned by Carleton Mitchell, an American racing yachtsman, and writer who died in 2007. Mitchell’s first job had been working as a stevedore (or docker) in Miami, which may help account for his love of the painting. Solow bought the riverscape in around 2005.

Van Gogh’s Barges shows a blazing sunset, with stevedores rushing to complete their task of unloading sand on the Arles quay. On the far side of the Rhône, to the west, the sun has just gone down behind the small town of Trinquetaille. Van Gogh loved including the French flag in his paintings, to add a touch of colour. He knew the spot where he set up easel well since it was just five minutes’ walk from the Yellow House in Place Lamartine—and he probably passed this place almost daily.

Interestingly, at this very time, this spot also caught the attention of Joseph Pennell, an American-born artist who worked mainly in Britain. He was passing through Arles on a working visit in Provence. Instead of looking across the Rhône, he stood slightly higher up on the embankment and faced downstream towards the historic center of Arles—a much more conventional composition. Pennell’s drawing Arles, from the River, is inscribed “September 1888”.

Van Gogh probably painted Barges at some point between August and October 1888. It is even possible that the two artists met, possibly when one of them was at work, although this remains conjecture. Pennell depicted a very large barge (possibly hauling coal), whereas Van Gogh shows a small vessel carrying sand. 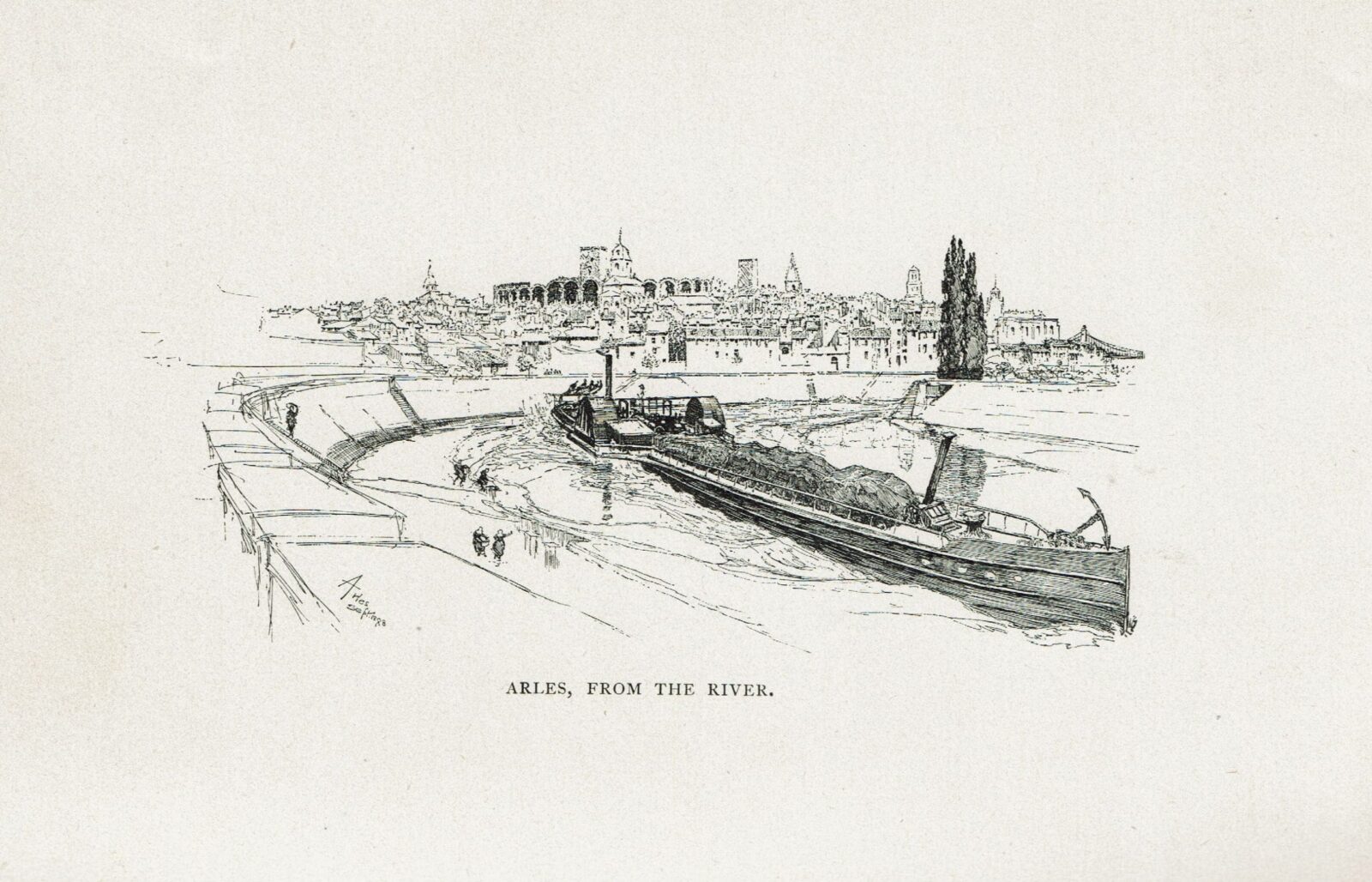 Joseph Pennell’s Arles, from the River (September 1888), published in the Century Magazine (July 1890)

Although Van Gogh’s subject matter is Impressionist, his colours are much more strident. He must have painted the picture very quickly, in a few hours, capturing a transient effect. As he was finishing it, twilight would have begun.

One of the earliest newspaper reports about Van Gogh anywhere appeared in the Arles weekly L’Homme de Bronze on 30 September 1888: “Mr Vincent, an impressionist painter, works, we are told, in the evening, by the light of the gaslamps.” The observer might even have seen him with Barges on the easel.

A legend dating back to the 1920s has it that after sunset Van Gogh would paint wearing a hat on which he placed a lighted candle. Francisco Goya is said to have done a similar thing, since he depicts himself with such headgear in a 1790s self-portrait. But this would be quite impractical (and dangerous), so the recently installed gaslamps probably illuminated Van Gogh’s canvas. 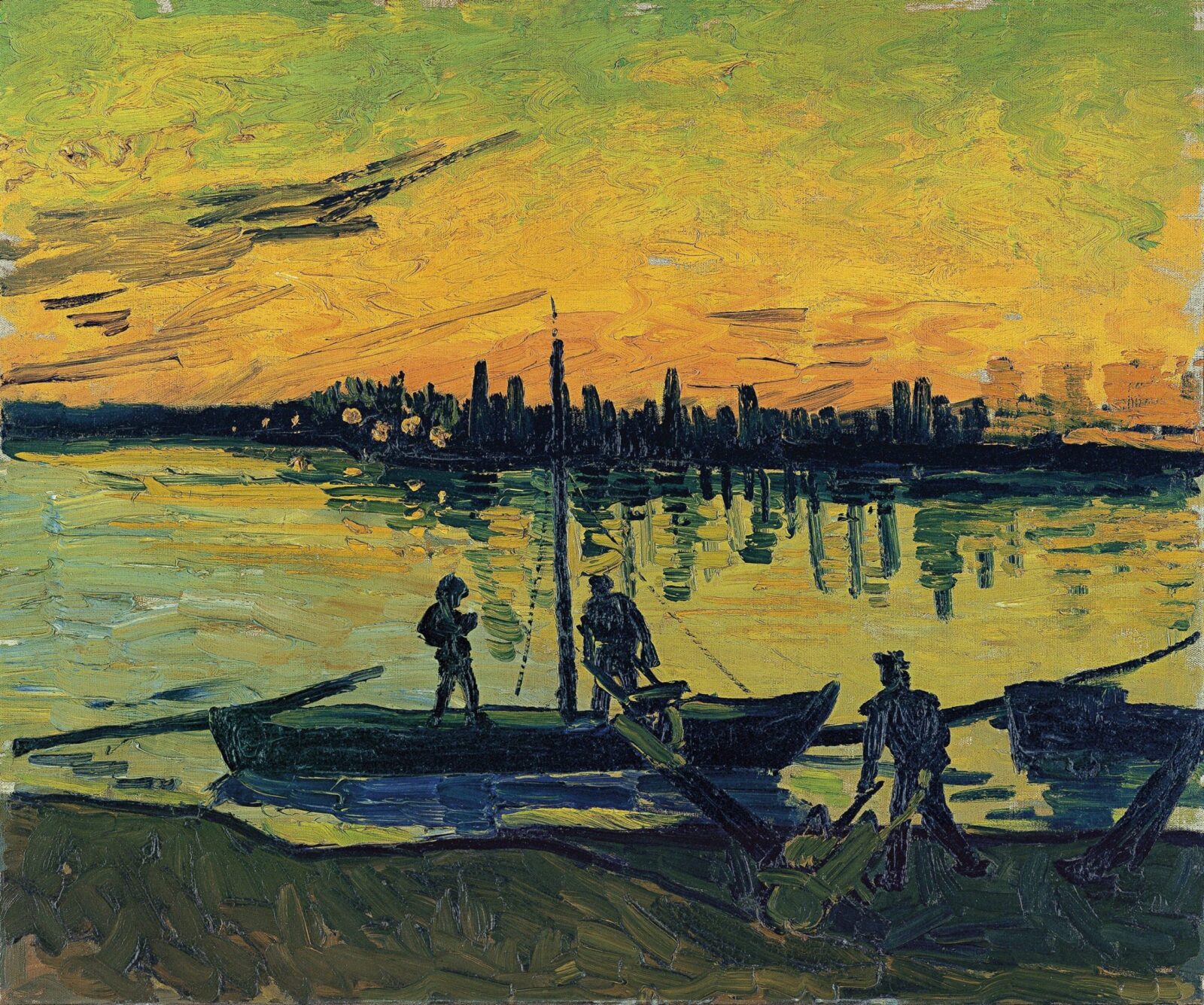 Van Gogh also painted another smaller version of Barges, with a different configuration of figures. This picture is now at the Museo Nacional Thyssen-Bornemisza in Madrid. 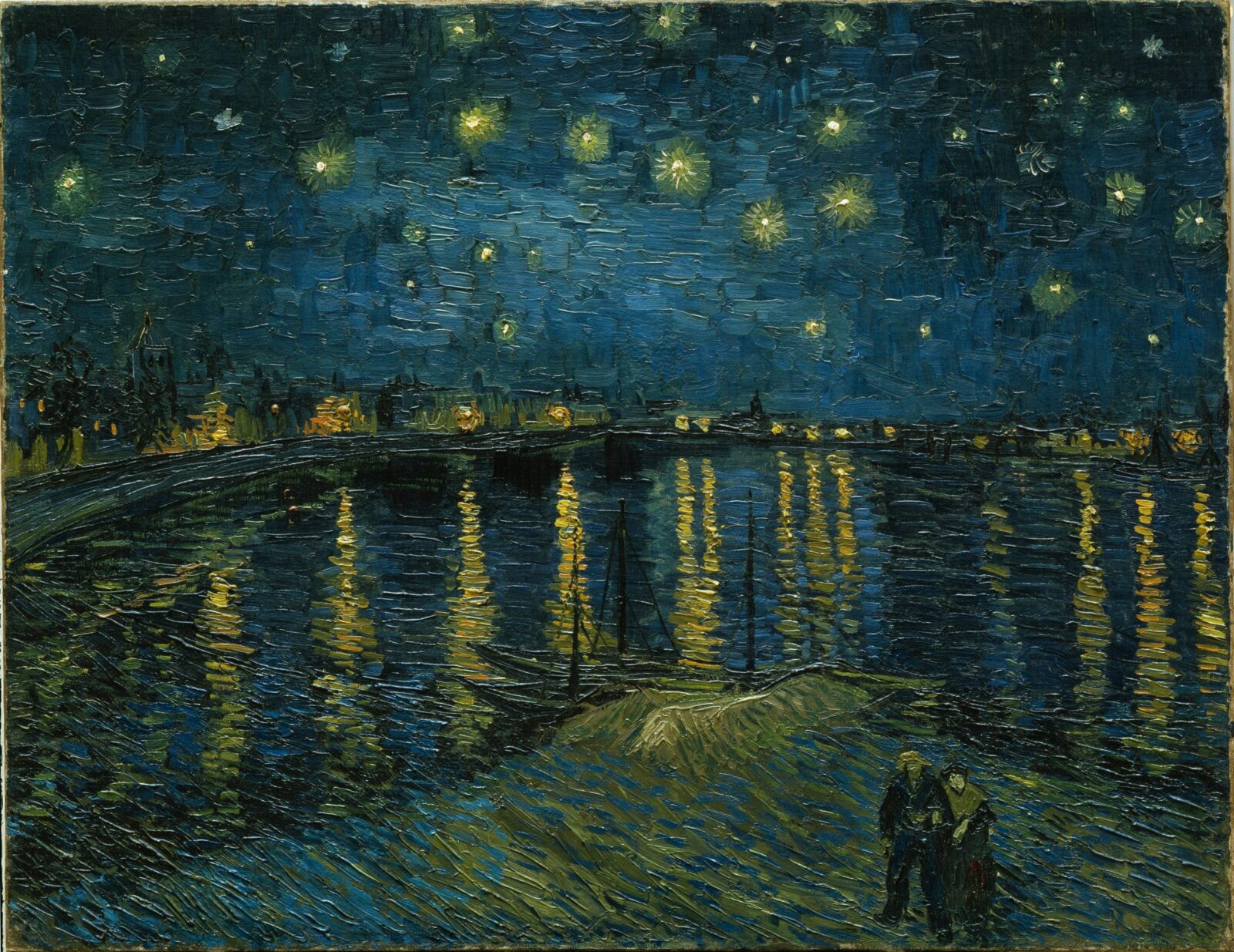 Soon after completing the two versions of Barges Van Gogh painted one of his most-loved pictures from almost the same spot, Starry Night over the Rhône (1888). This is essentially the same view as Pennell’s aforementioned work, although there could hardly be a greater difference between the American’s topographical image for a travel article and the composition from Van Gogh’s imagination. In Starry Night over the Rhône Van Gogh included two lovers strolling along the quay—and a pair of barges just visible in the reflection of the row of the distant gaslamps,

Van Gogh’s Rhône scene with the Big Dipper would be the precursor to what has become an even more celebrated painting, Starry Night, which belongs to the Museum of Modern Art in New York. This was painted in June 1889, after his move to the asylum at Saint-Rémy-de-Provence. 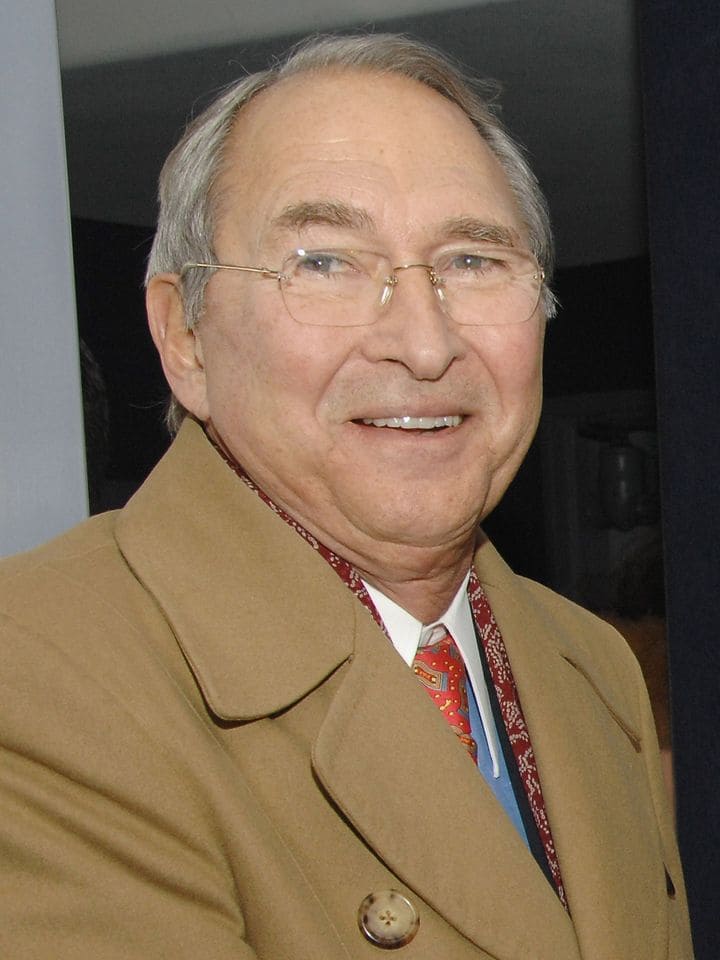 The larger version of Barges is owned by the Solow Art & Architecture Foundation, a New York-based, tax-exempt organization. Since most of its artworks are not on public view, this has caused some concern. A spoof, satirical website has been set up by to draw attention to the lack of access.

The foundation’s official financial return records show that it owned paintings worth a total of nearly $350m in 2018. Solow’s widow, the artist and designer Mia Fonssagrives, says that Solow’s collection (minus the now sold Botticelli) will hopefully go on public view in a privately run museum. This might be in one of his Manhattan properties, such as 9 West 57 St. 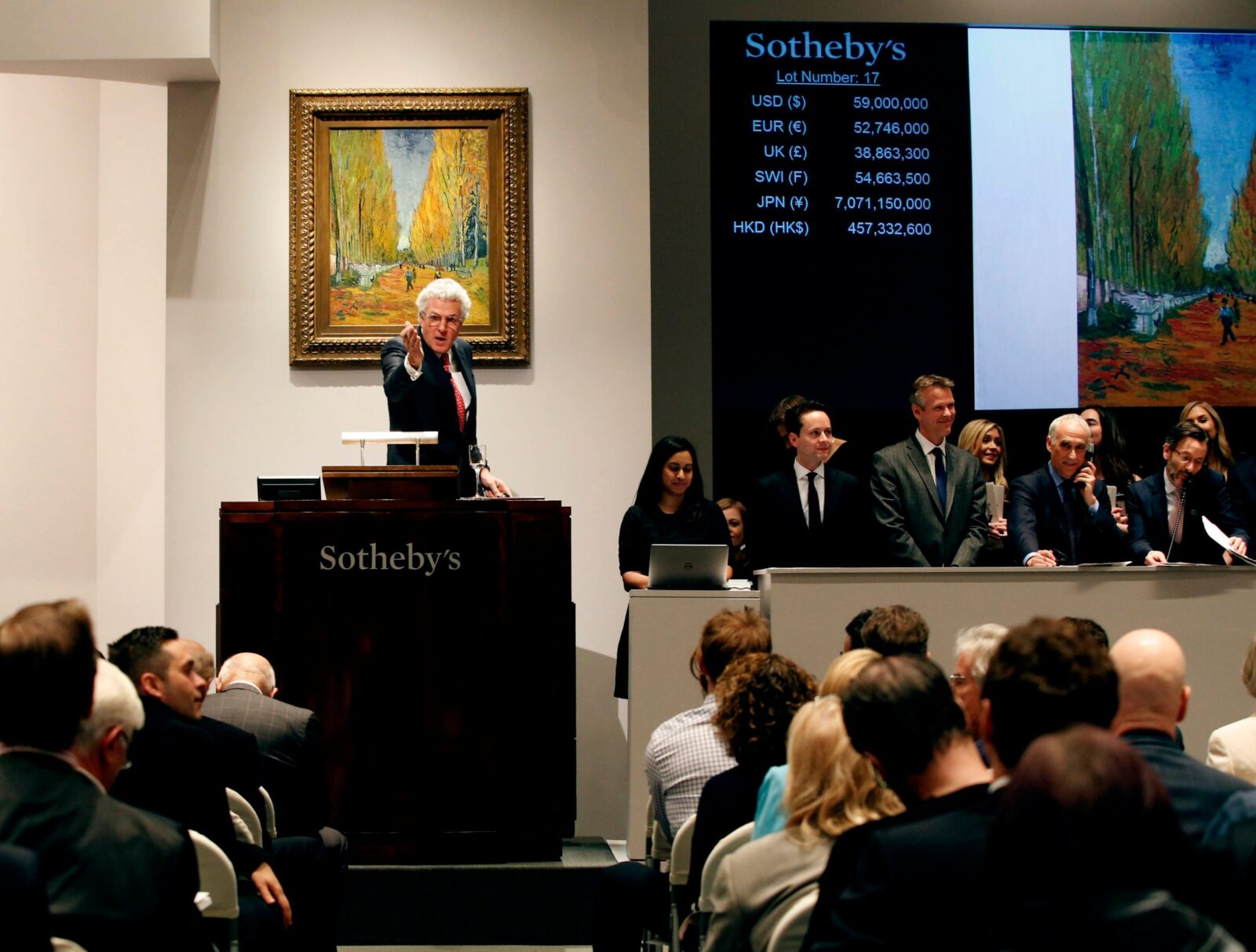 Solow probably once owned an even more important Van Gogh work. The New York Times reported that he sold L’Allée des Alyscamps (October 1888) at Sotheby’s in 2015. It then went for $66m, going to an Asian collector. Sotheby’s obviously does not comment on anonymous sellers, so the Solow link remains unconfirmed.

Let us hope that following Solow’s passing, his widow succeeds in setting up a museum. The Botticelli may have gone, but it would be a fitting tribute to Solow to display his remaining Van Gogh—a work which has long been hidden away in private collections.