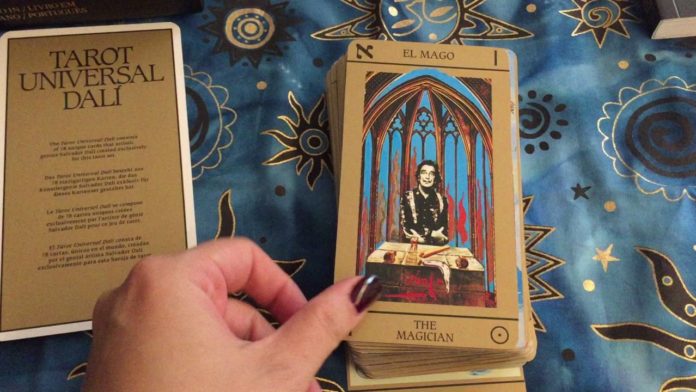 Salvador Dali – one of the most famous surrealists – is probably best remembered for his bright personality, “lobster phone”, soft clock and mustache, “always pointing to the sky. But only a few of the artist’s ardent admirers know about his passion for the occult. One of the most striking examples – a deck of Tarot cards, which he was ordered for the film about James Bond, “Live and let die”, the first tape with Roger Moore in the lead role. However, these cards did not appear in the picture.

The cards were an attribute of the character Solitaire, a fortune teller Caribbean drug lord, played by Jane Seymour. With a significant amount of money to shoot, the producer of the film Albert Broccoli did not hesitate to turn to Dali. The one with enthusiasm (perhaps it was not without Gala, who was fond of esotericism) accepted the offer to draw maps. But the agreement was terminated when Dali – who had already done some of the work at that time – demanded an exorbitant fee, which was too high even for the 7 million budget of the painting. Eventually, the creators of the tape turned to the less famous artist Fergus Hall, whose Tarot Witches appeared in the film. Cards from the Tarot Dali deck. Source: smithjournal.com.au.
Despite this, Dali continued working on the Tarot deck and finished it almost ten years later, in 1984. The cards were released in a limited edition and quickly sold out.

Now – 35 years later – Taschen Books decided to resurrect the Dali Tarot. The deck perfectly combines the artist’s knowledge of arcana and his signature motifs – faces without bodies, ants, roses and butterflies. He painted a moustache and goatee to the queen of cups, the moon was depicted as a female face looking at the modern metropolis, and Death – as a sinister skull in the crown of a cypress. Dali introduced himself as the magician and king of the Pentacle, and his wife Galya, of course, as the Empress. The 78 small works of surrealist art combine fragments of classic European masterpieces, Roman numerals and occult symbols. The new edition of the maps is accompanied by an explanatory brochure written by Johannes Phoebig, a Tarot expert. It includes an introduction on Dali and a manual explaining the meaning of each map.

The new edition of Dali’s Tarot cards is now available for sale for £50 or $65.