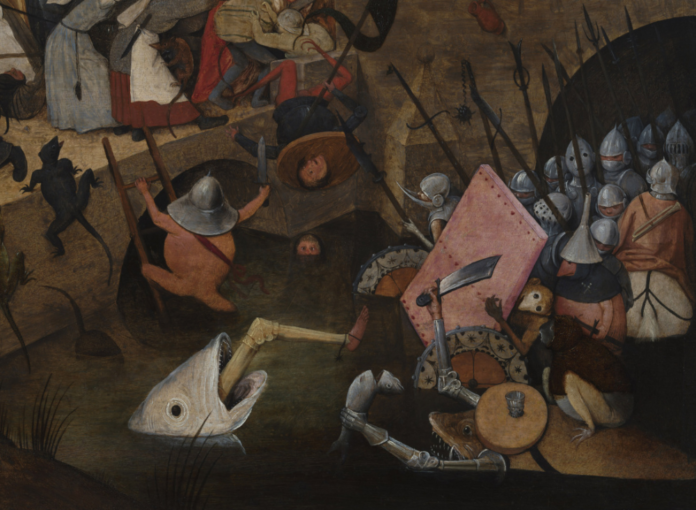 This ten is meant to be pretty scared. But with its help, you can experience other feelings. For example, the surprise is that Bosch isn’t in the top ten scariest paintings. Or the thrill of discovering a new name: the ten consists not only of masterpieces of art.

Jānis Rosenthāls, Latvia’s most popular artist, depicts a meeting with Death that is everyday but inevitable: the mother of a dead child looks at a woman in a white frown (it seems that she is in the first stages of accepting death – it’s denial and anger), but seems ready to open her fingers and give up the baby. The child is no longer with her, not in the world of the living – he too is wearing white robes symbolizing death. Skinny woman with a sickle, though depicted leaning over the child, makes the impression of a very high: if she straightens – will not fit on the canvas, as do not fit in the picture in the whole height of the tree: death is certainly terrible, especially when it is for his victim prematurely, but still it is an integral part of nature, like the forest from which Death came out, into which she will take the baby and which is her size.

This huge painting is three meters wide! – makes an indelible impression when you stand in front of it in a museum. The mournful sky. A field dotted with corpses that has no end. And silence. It’s even scarier when you learn the story of a painting. During the storming of Plevna, Vereshchagin’s younger brother died. The painter himself was healing his wounds after that time, but tried to find his brother’s body to bury him. However, he failed to do so. “There was no possibility to pull out the body – it remained, to my greatest grief, to swell and rot in the masses – the terrible mass of our soldiers’ corpses that day,” the artist recalled.

Vereshchagin was badly scolded for this painting (as well as for the entire Balkan series, which includes it). For lack of patriotism. After all, instead of glorious victories of the Russian army, the artist, as usual, painted the abominations of war as such.

Polish artist Zdzisław Beksiński (1929 – 2005) was not a star during his lifetime: he lived modestly, was a shy man, did not entertain the public with eccentric antics (only once he burned in the backyard a mountain of his works, which he considered too personal and not successful enough), did not like to go to museums (even at his own exhibitions), did not give names to his paintings. But since the 1960s his exhibitions have been successfully held, in 1970s Hans Rudy Geeger, an artist who invented the image of Alien for the film of the same name, a fan of the work of the Mexican became a film director and nightmare collector Guillermo del Toro.

However, Zdzisław Beksiński did not have to add scandal to his life for the sake of fame. Firstly, his works coped with this task: for example, a series of photographs (and Mexinsky was also fascinated by this art form) and drawings with sadomasochistic images. Secondly, the last years of Mexinsky’s life were such a nightmare, that newspapers printed his name in the biggest font: in 1998 his wife died, in 1999 his son killed himself, and in 2005 the artist bled out on the doorstep of his own house – 17 stab wounds were inflicted to him by the son of the housekeeper, the guy either tried to rob the artist, or asked for money and did not get it.

It is wrong to explain with these tragedies the content of the paintings by Zdzisław Beksiński: most of them were painted before this black final strip. Then where did his heartbreaking images come from? Probably from his childhood. He was born in 1929. He was already a teenager during World War II. There was another nightmare in his youth when he studied architecture and went to work on a construction site. He didn’t like that job, to say the least. That must be why the crowds of dead in his paintings often look like they’re made of concrete, not bones.

Yeah, Zdzisław Beksiński again. In the top ten scariest paintings were two of his works and seven were nominated.

Beksiński is a very prolific author. The exact number of his works (and this, apart from photographs, collages, drawings and sculpture itself) is unknown. Curiously, the work of other artists of Zdzisław Beksiński was not fascinating at all. He admitted that he could look through an album with reproductions every few years in the dentist’s queue – if there was nothing more interesting on the coffee table. And he could recognize Da Vinci and Picasso’s paintings – three each. “In short, the painting does not interest me much, I am not looking for a meeting with her, I meet with her accidentally and naturally, like a tree and a cow,” – said the artist.

One of the many works by Francis Bacon based on “Portrait of Pope Innocent X” by Diego Velasquez. The painting, which captures an endless scream, an eternal and hardly explainable horror (has the information reached the Pope that God is dead? he sits in the electric chair and there is no one to unplug it? he doesn’t want Bacon to paint it?), a dissolving and flowing reality off the canvas, which can’t be grasped even by eyes – because they are horrified to close.

Art historians can tell you a lot about this painting. And about the rattling mixture of guilt and pain that fell on people in the post-war era. And the oppressive atmosphere of the Cold War. The existential longing, finally. But Bacon himself said about the content of his paintings as follows: “I try not to interpret my own works. I don’t know what they mean. I don’t tell stories, I have nothing to tell. But I like the power of the image.”

Theodore Géricault is the brightest representative of French romanticism. If you want to remember or explain to someone once and for all that romanticism is not romantic at all, here are some of Géricault’s works: dead people (1, 2), dead horse, dead cat. As for these guillotined heads, Géricault sketched them while working on his main masterpiece – “Jellyfish Fleece”. Then the artist became a regular in hospitals and morgue, and sometimes stinky severed limbs were delivered directly to his studio: he wanted to depict the corpses on the canvas as accurately as possible, although in the final version of the picture of naturalistic horrors is almost gone.

Ken Currie (born 1960) is a modern Scottish artist, a great admirer of Francis Bacon’s work, which you can easily see by looking at his works. One of the central motifs in Currie’s work is the depiction of aging, disfigured and even decomposing bodies: this theme emerged in his painting as a response to the political and humanitarian disasters of the 1990s in Eastern Europe. Prior to that, he painted his horror of politics Margaret Thatcher, and in his later work there is, for example, a painting “Three oncologists” – dedicated to the fear of cancer.

Ken Curry is from Glasgow, Hollowgate is one of the city districts. The title of the painting, which took 4th place in the list of the most terrible, can be translated as “Galloogate Salo”. In painting the portrait Ken Kari added beeswax to the oil paints – this is how human skin and the horror of the person in front of this painting looks more natural. Ken Curry often paints his creepy paintings with himself, and then his interviewers begin their articles by describing how they, who are well acquainted with the work of Curry, but not with him, suddenly find themselves with the artist one-on-one and recognize the prototype of artistic nightmares in the face.

Ken Curry does not like to explain the meaning of his paintings. One day he even destroyed the painting after someone claimed that it clearly depicted the banking crisis. Curry thinks the painting dies when it’s unraveled. The ideal situation for him is when, leaving the exhibition, the viewer mutters: “What was that?”

Vasily Vereshchagin. The apotheosis of war. 1871

But Vasily Vereshchagin is not one of those artists who give the audience the right to look for meaning in a picture, to draw conclusions and make lessons. To avoid misunderstanding and inconsistencies, the frame for “The Apotheosis of War” he decorated with the inscription: “Dedicated to all the great conquerors – past, present and future. Alas, we can not say that the lesson learned Vereshchagin. But the fact that his painting to this day frightens (even the strongest and fearless) – already quite good.

Francisco Goya. Saturn Devouring One of His Sons . 1823

Saturn ate his children because he was prophesied: the children would deprive him of power. Rivalry, love and hate of fathers and children – an eternal plot: it provides artists and writers with inspiration, and psychotherapists stable income. It is no wonder that this painting retains its frightening relevance even now, when it is difficult for the heroes of ancient myths to compete with the horrors of the newswire. 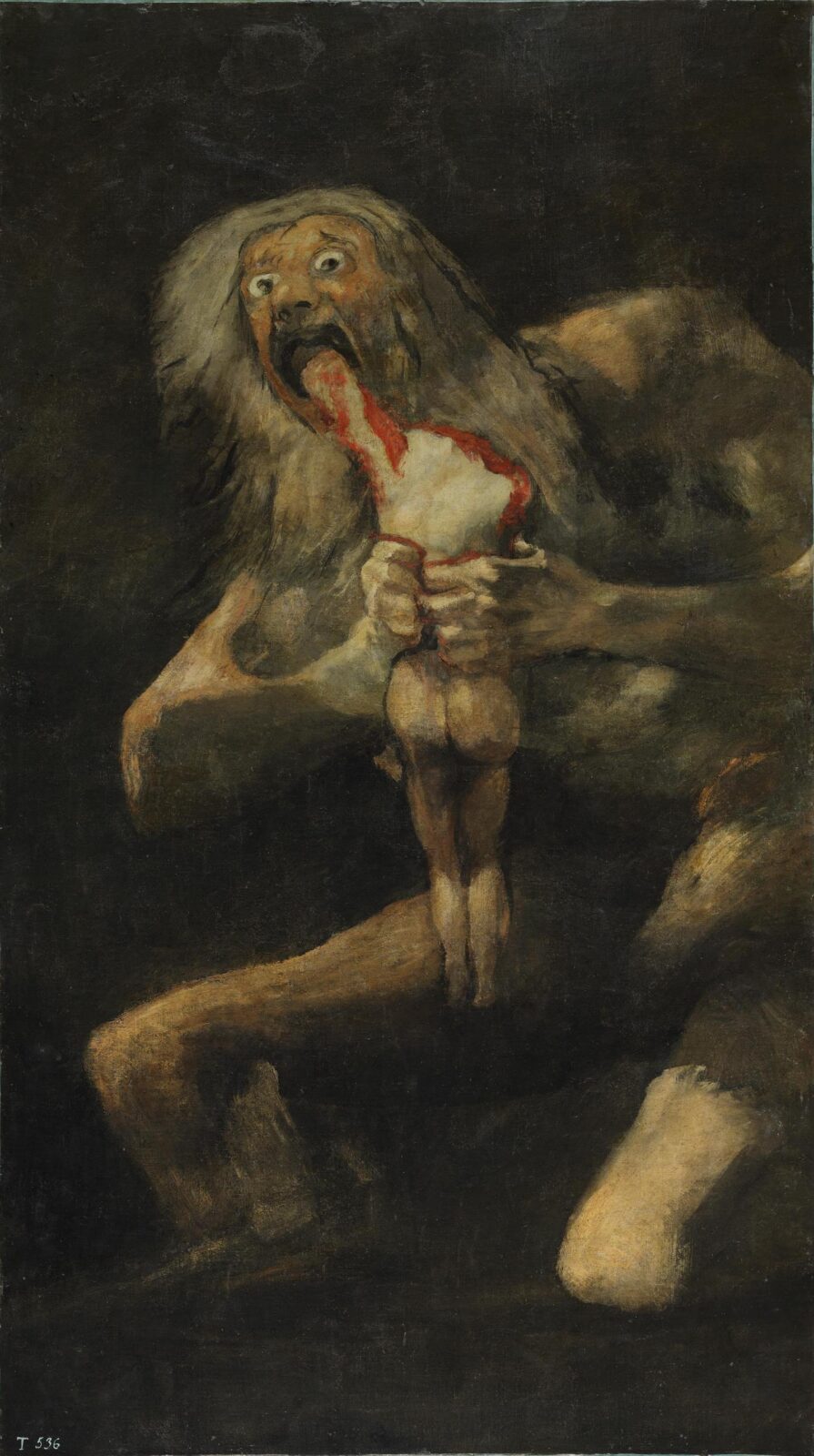 How do you explain the victory of this painting? Firstly, by the fact that it is an absolute masterpiece, while quite horrible: Greta is heading into the jaws of Hell through a landscape inhabited by monsters that represent vices. The article about “Mad Greta” on the website of the Museum of Meier van der Berg, where it is stored, is called “A horror film in the form of a picture”. And the epigraph rightly states that Bruegel, like the director of horror, managed to simultaneously cause the spectator fear and pleasure.

This painting is an undeniable masterpiece, but also very creepy: Greta is heading into the jaws of Hell through a landscape inhabited by monsters that represent vices. The article about “Mad Greta” on the website of the Museum of Meier van der Berg, where it is stored, is called “A horror film in the form of a picture”. And the epigraph rightly states that Bruegel, like the director of horror, managed to simultaneously cause the spectator fear and pleasure.

Helen - February 17, 2020 0
Uffizi Gallery is one of the most famous museums in the world, where the best works of world painting are kept. Of course, when...