Home Art market The Lost Picture By Monet Was Found With The Help of Google... 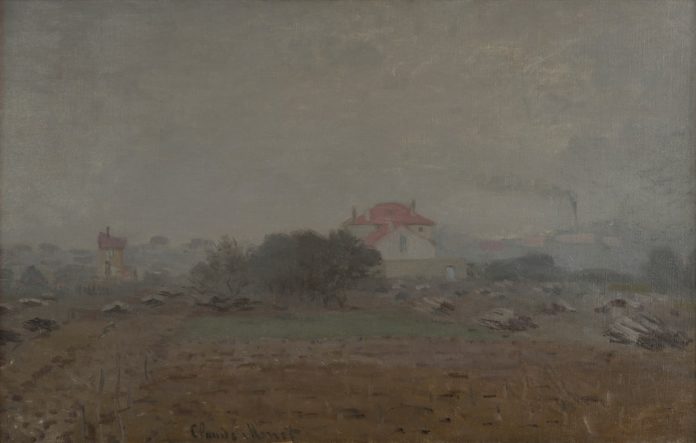 The exhibition “Monet and Architecture” will work in the National Gallery of London from April 9 to July 29, 2018. Claude Monet’s painting The Fog Effect, which was considered lost since 1895, was discovered by the Internet search engine art historian Richard Thomason. The find will be exhibited at a unique exhibition of works by the master, which opens in the spring of 2018 at the London National Gallery.

The painting depicts the view of Argenteuil – a small town on the right bank of the Seine near Paris, where the artist lived from 1871 to 1878, and where he created some of his most famous works. A British researcher, Professor of the Department of Gordon Watson of Edinburgh University, was familiar with Monet’s work on her information in the black and white book of 1982 “Monet in Argenteuil” and on the image “the size of a postage stamp” in the color catalog of 1990. The painting was listed as “in a private collection”.

Richard Thomson, wanting to get this painting for the upcoming exhibition on architecture in the works of Monet, launched a Google search and saw that the work was recently sold by an art dealer in New Orleans. Earlier, in 1989, the picture appeared among the lots of Christie’s, and in 2007 it was again sold at the auction of the same auction house for an amount of about 468 thousand euros. The catalog indicated that Monet’s “The Fog Effect” was exhibited only three times: in 1874 “possible” in London and in 1895 – in Boston and New York. Thomson contacted the current owners of the work, who gladly agreed to provide it for a major exhibition of Claude Monet at the London National Gallery.

“Monet and architecture” – the first exhibition in history, which will explore Monet’s attitude to architecture throughout his life and work. The organizers quote the following quote by Claude Monet: “Artists draw a bridge, a house, a boat … I want to draw the air surrounding the bridge, the house, the boat – the beauty of the light in which they exist.”

The exposition will present more than 70 works from the collections of various museums and private collections. Among them – captured Monet ten species of Argenteuil. For the official poster of the exhibition as an illustration chosen picture “View Bordighera”, which will be brought from the Hammer Museum in Los Angeles.

The exhibition “Monet and Architecture” will work in the National Gallery of London from April 9 to July 29, 2018.

A Princess Diana memorial garden has opened at Kensington Palace