Home Art market The real author of Monet “self-portrait” was discovered by the Marmottan... 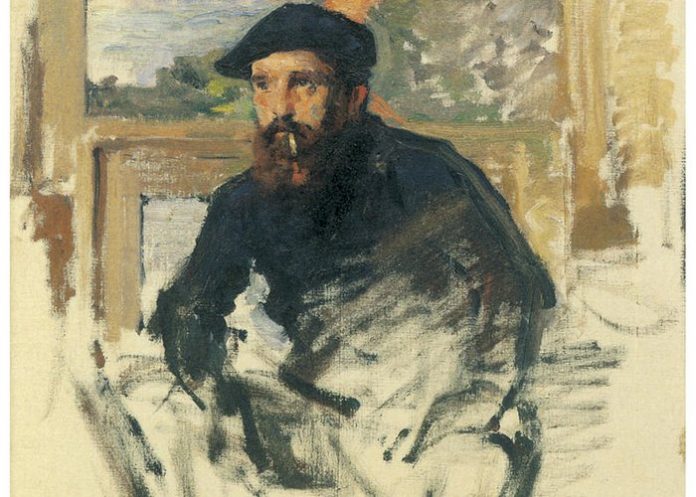 One of Claude Monet’s rare self-portraits, belonging to the Marmottan-Monet Museum in Paris, was demoted. The painting is now attributed to the little-known Swiss artist Charles Giraud. The new attribution of the work is important: from now on, instead of three, we can only talk about two self-portraits of Claude Monet. The canvas under the new attribution is now on display at the Van Gogh Museum in Amsterdam in an exhibition entitled “On Painting. Portrait of the Painter”.

The lengthy debate on attribution was partly due to a dispute between the Wildenstein Gallery, which gave the portrait to the Marmottan Museum – Monet, and its previous owner, Paulette Howard Johnston, wife of the British admiral. She died in 2009 at the age of 104 and by that time was the last living person to know Monet.

The unsigned portrait of Monet shows a bohemian French artist with a beard and a beret. Behind him is one of his 1884 landscapes, the view of Cap Martin on the French Riviera. Interestingly, the bottom half of the painting is completely unfinished.

Although the work has long been called a self-portrait, the sitter looks away, and carelessly squeezed in the lips of a cigarette and his hands resting on his hips suggest that he poses for an informal portrait. The smooth stroke on the unfinished fragments does not correspond stylistically to Monet’s works of that period.

Despite the fact that in the exhibition of the Marmottan – Monet Museum the painting was presented as a self-portrait of Monet, doubts about authorship arose many years ago. In October 2010, The Art Newspaper wrote about them. Among the possible authors were John Singer Sargent, Berta Morizo, John Breck and Charles Giraud.

The portrait originally belonged to Monet, who hung it in his bedroom. In an unpublished letter, Paulette Howard-Johnston recalled that she saw the painting there in 1925, and then the painter told her that it was “his image, which he prefers others. Later she inherited the work from her father, the painter Paul Ellie, but in 1984 she sold it to the Wildenstein Gallery in New York.

The records of the Marmottan-Monet museum show that Wildenstein gave the portrait to the institution in 1986, although until 2000 the painting was not exhibited there. Where it has been all these years remains a mystery.

Not only that, in the catalog-reason, which Wildenstein released in 1979, the painting was attributed to Sargent. In the revised edition of 1996, its author has already listed Monet, and the image was reproduced on the front page. It was also reported that the picture is in the “private collection”, although Wildenstein, presumably, has already given it to the Museum of Marmottan – Monet a decade earlier.

Scientist Joachim Pissarro (great-grandson of the impressionist painter) in an interview with The Art Newspaper claimed that the picture was not a self-portrait, but a portrait that was done by Charles Giraud, who lived in Paris in the 1880s. The expert supported his words with lines from the artist’s diary for 1885. It described Giraud’s visit to Giverny, wherein the afternoon he spent an hour sketching the portrait, borrowing paints and the palette of Monet. Perhaps the incomplete work was due to time constraints.
Texts, scientific analyses, and stylistic comparisons have shown that the author of Monet’s portrait is probably Giraud.
In 2018, the Marmottan – Monet Museum changed its signature on the work to “attributed to Sargent”, and last year it was removed from the exhibition. The portrait is now on display for the first time at the Van Gogh Museum as a work by Charles Giraud.

Thus, only two authentic self-portraits of Claude Monet are now known in the world. One, made in 1886, depicts him in a beret and is in a private collection. The other, dated 1917, was presented to a friend of the artist, Prime Minister Georges Clemenceau, and now belongs to the Musee d’Orsay in Paris.

Van Gogh admirers can see his portraits painted by Australian Impressionist John Russell and Henri Toulouse-Lautrec. But the central exhibit is Self-Portrait with a Bandaged Ear (1889) from the Courtauld Gallery. It has been rented to the Van Gogh Museum while the Courtauld is undergoing a major renovation. After closing the exhibition in Amsterdam, the painting will remain in the museum’s permanent collection until September or even longer – until Curto opens in the spring of 2021.