Art collectors, by definition of psychologists, are people with a developed instinct for the property, a need for vigorous activity, and a desire for excellence.

Americans possess these qualities to the full, which, at least in part, can explain the collector’s “boom” that began in this country at the end of the last century and continues to this day.

The first signs of this phenomenon appeared shortly before the Civil War of the 1860s when several financial and industrial tycoons began to amass impressive art collections.

All the magnificent museums that have made America a country of exemplary and richest museum culture, not inferior to European capitals, are organized and maintained not only at the expense of the state but also of private art collectors.

After the founding of the Metropolitan Museum in New York in 1870 (solely on a private initiative), art collectors fought for the honor of donating their collections to the new museum. Later, already in the 1930s, the National Gallery in Washington, unique in terms of the number of masterpieces, was created, the basis of which was laid by the 35 millionth collection of Andrew Mellon, as well as the collection of the Kress spouses (from Giotto to Titian), J. Widener (Raphael, Bellini, El Greco, Titian, Vermeer) and a number of others.

Art collectors Frick, Whitney, Morgan, as well as Paul Getty, Solomon Guggenheim, Alfred Barnes founded their own museums, accessible to the public and not inferior in their level to many family collections of European sovereign dukes and Roman prelates.

“America’s richest citizens see themselves as custodians of their own wealth rather than its owners,” wrote Frenchman Pierre Cabanne in The Great Liberators, published in the 1960s, “and with tremendous intellectual altruism, they see themselves as having a responsibility to share with other joys that these riches can bring. ”

American art collectors played a very special role in supporting French art of the late 19th and early 20th centuries. The first Impressionist painting acquired for the American collection was Degas’ Ballet Rehearsal, bought in 1875 by the Heivemeyers and now in the Metropolitan Museum of Art.

And the first exhibition of Impressionist works, held in New York already in 1886, allowed French dealers to establish strong contacts with American buyers – Rockefeller, Weedener, Hill, and others, who paid very large sums for works that had difficulty finding a sale in Europe.

The middle of the twentieth century, and especially the post-war period are characterized by a powerful artistic “boom” that captured the whole world. In the era of rampant inflation, when works of art became almost the only commodity beyond its control, America has become the largest art market, with all the advantages and disadvantages of such enterprises: the rush of auctions, artificial price gouging, and the dishonesty of art dealers.

The same period created a new type of art collectors who combined enormous knowledge, almost limitless financial opportunities, the ability to successfully run an art business, and impeccable taste. Such was George Wildenstein, owner of one of the best galleries in New York – connoisseur, businessman, art collector, and educator.

Artworks by El Greco, Velazquez, Goya, Fragonard, David, most of the Impressionists passed through his hands. His personal collection consisted of the finest examples of medieval illustrated manuscripts.

Largely thanks to the activities of dealers and art collectors like Wildenstein, America continued in the post-war era to maintain one of the first places in the world, not only in terms of quantity but also in the quality of collections of classical and modern art.

In recent decades, due to the dizzying rise in prices and the investment nature of acquisitions of masterpieces of art, the composition of the collections and their owners has changed somewhat. Now, from 20 to 30, and sometimes up to 50 percent of the art market in America is occupied by financial and industrial corporations, which buy mainly contemporary American art.

Yet collecting remains the most common hobby of the “rich and famous.” A list of America’s 100 largest private collections in recent years, published by Art and Antiques magazine, also shows a clear shift in the center of gravity towards collecting contemporary art.

The art budget is $ 25 per month. The history of the famous Rubell collection

The famous art collectors of contemporary art Don and Mera Rubel have always had good intuition – they acquired their first work by Jeff Koons back in 1979.

Speaking about the influence of institutions on the art market and art in general, we are used to paying attention primarily to government institutions (leading museums such as MoMa, Tate, and Louvre galleries), international forums and festivals of contemporary art (Venice Biennale, Documenta, Burning Man), or mega-galleries (Gagosian Gallery, Zwirner Gallery, Hauser & Wirth, etc.).

Private nonprofit initiatives should be estimated. Sometimes the work they do is as important as the well-functioning of a lavishly funded museum.

The famous art collectors acquired the first work in their collection in 1964. At first, the young family was very limited in funds, so Don and Mera agreed that their budget for art would be $ 25 per month. Initially, the Rubells were interested in young art (they simply could not afford anything else).

The famous exhibition of 30 Americans, entirely consisting of works from the Rubell Collection, has traveled to more than a dozen museums. At the moment, the collection includes about 7200 works by over 1000 artists.

Undoubtedly, the maintenance of so many works of art is both troublesome and costly. A systematic approach to the formation of a collection and, which is no less important, in the further content of works is an important point that should be emphasized.

The Rubells not only made their huge collection available to a wide audience but also took care of its proper archiving. Anyone can purchase from the museum itself or online a huge two-volume catalog of the collection. In addition, the art collectors periodically publish thematic catalogs and catalogs of individual artists.

The Rubell collection offers a comprehensive look at contemporary art. In addition to the already classical works by Murakami, Cattelan, Kruger, Lucas, Kusama, and other sensational authors, at the Rubells one can see, for example, the works of 29-year-old artist Tschabalala Self.

The name of the latter has been on everyone’s lips since the moment when her work Out of Body (2015) was sold at Christie’s for an amount 6 times the original price. However, good intuition is what Rubell has always distinguished: they acquired their first work by Koons back in 1979, and Haring in 1981.

Since 2011, Rubell has been practicing individual residencies for young artists. As a rule, the residence provides an opportunity for young authors to live and work in the foundation for several weeks (or a museum, if you keep up with the renovations).

Later, the works created during the residence are presented as a small solo project. At one time, Sterling Ruby became the first resident, an author whose works have since been added to the collections of the Tate Gallery and MoMA.

The first resident of Rubell in the new exhibition space was Amoako Boafo, an artist of Ghanaian origin. Boafo works with traditional oil painting in the equally traditional genre of portraiture, but despite the conservatism in media, Boafo’s paintings can hardly be called ordinary.

The author traces his characters with his fingers on a monochrome background – the embossed brushstroke obtained as a result of this technique makes Boafo’s paintings dynamic and easily recognizable.

The history of the Rubell collection does not end there. In an interview with the Financial Times, Mera Rubell talks about plans to open the next museum in Washington. Rubell spent six years finding partners for this project.

TOP 5 main art collectors and their galleries in New York

This private museum was founded by the entrepreneur, philanthropist, and one of the most famous art collectors Ronald Lauder in memory of his friend, art dealer Serge Sabarski. This museum also hosts temporary exhibitions dedicated to German Expressionism, individual participants in the movement, and their connection with world art.

Leo Castelli is one of the most famous art collectors. Leo emigrated to the USA shortly after World War II had begun. Later he became a gallery owner.

He made a great contribution to the fact that American post-war art appeared and became known and recognized throughout the world.

Leo Castelli’s two-space gallery in New York is now run by his wife, Barbara Bertozzi Castelli. Here, to this day, exhibitions of post-war art are held, but they are done with a critical approach, adding works by contemporary authors. 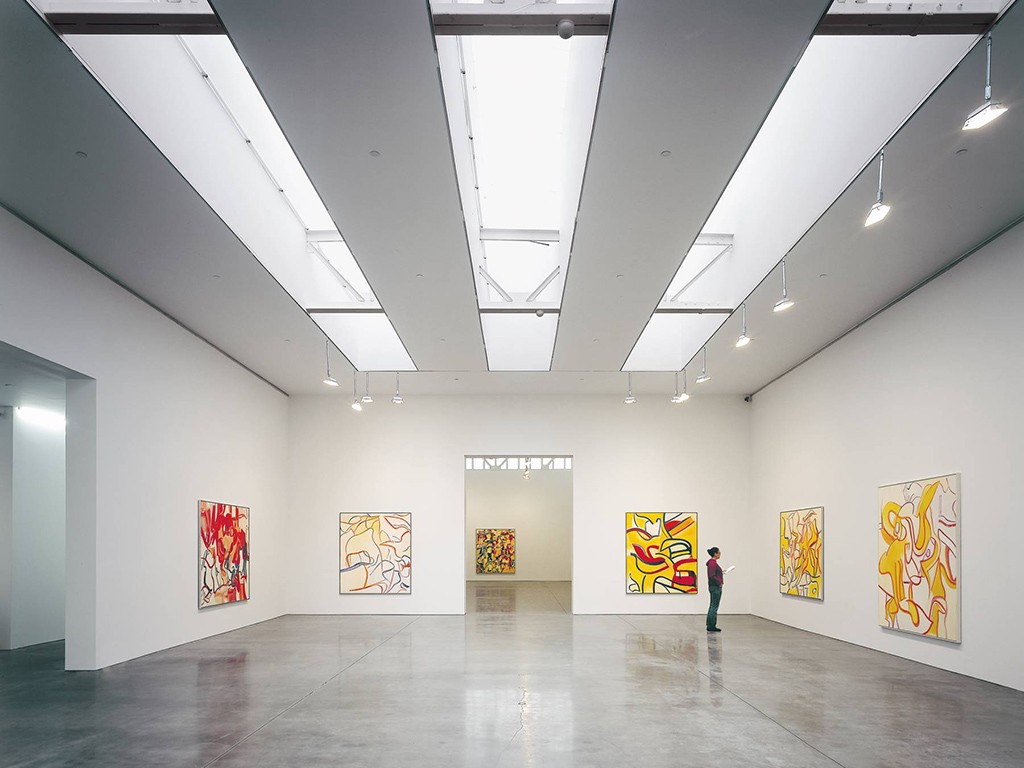 Willy-nilly, critics compare the two art collectors and pillars of the gallery business – Leo Castelli and Larry Gagosian, whose influence on the modern art process can hardly be overestimated.

The latter called the former a teacher and said that he understood a lot because he simply watched Castelli’s work.

Gagosian Gallery represents the interests of dozens of artists, including famous and still working – Anish Kapoor, Jeff Koons, and others. The gallery participates in world exhibitions and fairs actively.

Now Gagosian has eighteen representative offices in the USA, Europe, and Asia and has a reputation as the No. 1 art dealer in the world. 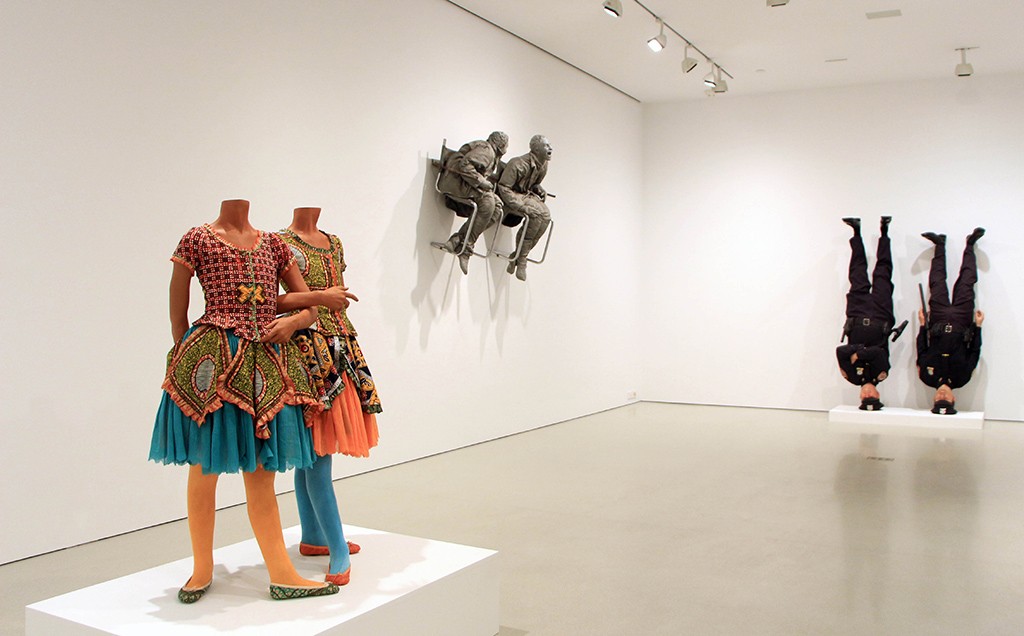 Co-founder of investment company MSD Capital, L.P. In 2008, Glenn Furman, one of the top famous art collectors opened The FLAG Art Foundation in the bohemian area of ​​Chelsea, a platform that shows the widest audience that contemporary art can be understood by absolutely anyone, even the most untrained viewer.

To do this, they show here from four to six exhibitions a year by world-famous artists and beginners. Large-scale projects of Roy Lichtenstein, Chuck Close, Jeff Koons, the art duo of Elmgrin, and Dragset have already taken place here. All FLAG programs – conversations with artists, workshops, and so on – are open and available to the public absolutely free.

Museum of Arts and Design (MAD)

It houses a collection of international contemporary design dating back to the 1950s. Actually, then the museum was founded on the initiative of Eileen Osborne Webb, the daughter of a collector and philanthropist.

All MAD exhibition projects are inspired by innovative ideas from around the world. Particular attention is paid to education – seminars, theoretical and practical classes are held for students and adults, as well as families.