The new collection of Dior Maison tableware is dedicated to Brazil and reminds us that there is always a place for a holiday in life.

Ceramic plates from the Copacabana collection, Dior Maison, can be combined with each other and can also be used as decor.

Stars of the sea rest on ceramic plates, water decanters turned into aquariums with colorful fish, and dish racks into fancy sea animals. The new line of Dior Maison tableware is named after the world’s most famous beach, Copacabana, which stretches for four kilometers along the shores of Rio and sings Brazil, a country where people can live brightly against everything. It is symbolic that the Dior house released the collection at the height of the COVID-19 pandemic as if reminding that the holiday is in fact always with us.

“Monsieur Dior was fascinated by Brazil,” explains the origins of the collection by Cordelia de Castellane, creative director of Dior Maison. – Traveling to South America impressed him and inspired him to create new prints and dresses. In the mid-1950s, Dior invented the dress Soirée à Rio (“An Evening in Rio”), which became famous after the death of his master – when the creative director of the House Marc Boan included the outfit in the spring-summer 1961 collection. In the same year, Elizabeth Taylor wore this airy chiffon dress embroidered with large tropical flowers to the Oscar ceremony – and it is still associated with Soirée à Rio. 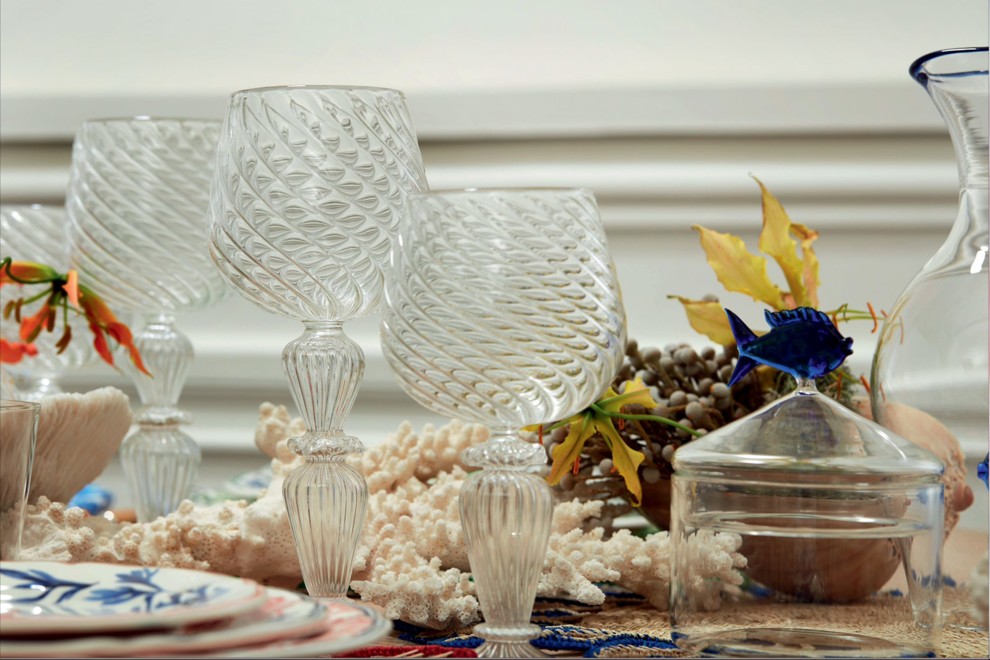 All glass items from the Copacabana collection, Dior Maison, are made on the island of Murano in Italy.

While working on the Copacabana line, Cordelia de Castellan immersed herself in the House’s archives to trace the use of tropical motifs – particularly images of corals and sea stars – in Dior collections. The references she found were modified according to her own vision of Brazil’s fantastic underwater world. The line includes vases and decanters, plates and dishes, handmade napkins, tablecloths, and coasters for dishes. The collection turned out to be truly cosmopolitan, which is especially symbolic at a time when the whole world is thinking about the consequences of isolation and it’s future. Glass vases and glasses were blown in Italian workshops, ceramic plates were made in France, and raffia made from palm leaves growing in South America became the basis for wicker dish stands.