Home Art market What does 2021 hold for the art market? 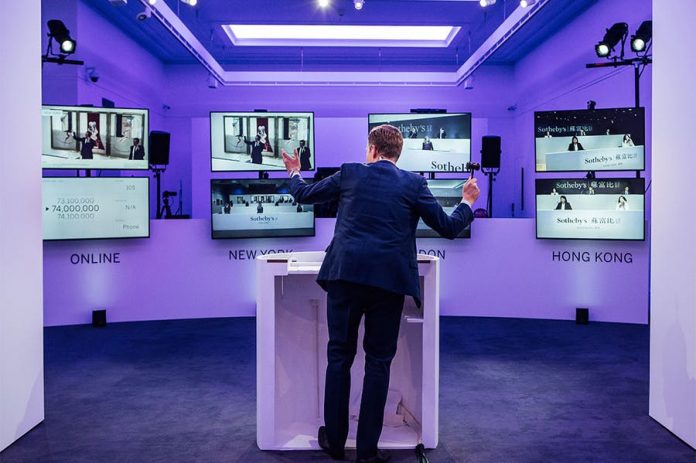 The crystal balls are more closed than usual this year. But, one thing seems clear: the art market. Like many other businesses, it will not return to its pre-pandemic form. Even when it becomes possible. Too much has been learned and lost.

We have seen how widely ignored online auctions have evolved into increasingly sophisticated hybrid live multi-site events. We stayed in the comfort of our homes and watched stripped-down virtual versions of the world’s largest art fairs. Both gave us the opportunity to communicate with the staff in real-time and also, thanks to their technical prowess, see how their proposals might look on our walls.

Most importantly, we saw how easy it was to break with tradition – in terms of the global auction calendar, its classic sales categories, and how and where art can be sold.

In response to customer inquiries, for example, auctions were held to mitigate any potential impact of the US presidential election. The dealers put on pop-up shows in the Hamptons, Palm Beach, and other secondary locations for their clients – and, like them, stayed where they were. Likewise, auction houses opened up spa gallery spaces and announced record years of private sales overall.

You can hardly give up this flexibility in responding to customer needs in favor of the old planning straitjackets.

In those long months of isolation, auction houses and dealers have learned that buyers, or at least some of them, are willing to pay surprisingly large sums for invisible art. They also found they could only work with online directories and fewer employees. Those businesses that survive this year are likely to remain more economical and less responsive to their already overworked and underpaid workforce.

But it is naive to believe that the loss of experience will not have consequences both for the companies themselves and for the art market as a whole. The reliance on online platforms has already fostered an art form that doesn’t have to be seen and a type of shopper who is very well informed, or, conversely, those sellers whose customers have no idea. Those who offer works of art by new artists or older works where status issues are key will be most affected. The art market, which is limping due to the pandemic, is likely to be even more one-sided than before.

An important phenomenon of this period was the rise of regional auction houses. It goes about trading floors in cities outside of the traditionally dominant marketplaces of New York, London, Hong Kong, and Paris. A number of highly successful sales have shown that shippers do not have to rely on the usual Sotheby’s and Christie’s duopoly.

These small businesses are winning a serious competition from their larger competitors, not least because of the prohibitive costs of selling the latter. Sotheby’s and Christie’s are at risk of expanding beyond entire art market segments, but they may be aspiring to become boutiques like Phillips.

However, their live broadcasts of the auctions revealed what is perhaps the strangest phenomenon of the year: many millions of people, most of them in Asia, watched other people spend unimaginable amounts on works of art.

It may have just been a new spectator sport at a time when nothing else was happening, but this involvement of young and ambitious people will have long-term implications for the art market. Already, Asian clients account for about 30% of global auction sales and a significant portion of the top lots. Regional market autonomy is observed. The newness has certainly been a big driving force behind the limited art trade this year, but newness itself inevitably gets boring, and it certainly didn’t take most of us long to get tired of endless auctions or start giving in to the cross-eyed fatigue of endless auctions, a saturation of Internet fairs.

As social beings, we yearn for the return of the human contact that accompanies our adventures in the art world, and as adaptive, problem-solving creatures, there will be those among us who will continue to innovate where they see gaps in the art market.

First of all, those who are not speculators want to return to browsing art and finding new treasures to take home. What this particular curious person is hoping to see is the flourishing of local, rather than global, initiatives aimed at opening up the market for all kinds of art at any price.

Now we are betting on how the slowdown in art sales and the massive transition to the Internet will occur over the art market 2021. Art market sales in 2020 appear to have dropped by at least a third in the industry, with galleries hitting the brunt.

The key to 2021 is whether art fairs get better.                In 2019, these high-octane temporary events accounted for an average of 45% of gallery sales. Predicting when these global gatherings will return is a Sisyphean task – it seems that they will forever be about six months away. Some, like Art Dubai, continue to knit and plan to open on their regular March slot.

The more popular time to come back comes a little later in the spring when the postponed exhibitions Art Basel Hong Kong and Tefaf Maastricht are disconnected from the calendar in May. Both fair organizers have offered digital alternatives with online viewing rooms in 2020, but this seems to suggest that this isn’t the best route for the new year. While these vastly improved websites will continue to support such events and were better than nothing in 2020, they have exhausted themselves in their current forms.

The question is, is it too early spring for a full-scale fair. How and when the vaccines will be introduced is still unclear, and it seems unlikely to me that by then we will all be jumping on planes once a week, if ever. There is a well-founded view that fairs simply will not return to their previous state, as they already proved to be too labor-intensive and expensive for many even before the pandemic.

As with other industries, most of the art market operates from home, or at least from our hometowns, and we’ve found alternative ways of doing business. Collectors say taking their time has helped them deepen their knowledge of the art and appreciate it more when they actually see the work in person. Gallery owners had free space to think more strategically about their business and shows, which they want to arrange.

But dealers need to sell art, and living artists, in particular, need them to do so. The organizers of the fair, realizing that there was a space between the two poles of a large-scale event and the website, stumbled upon something.

In the previous year, fairs such as Copenhagen’s Chart and Nada Miami have experimented with a multi-site approach. These are still temporary shows, so they can generate buzz and side events. But, they are run through separate galleries in their respective cities. Fairs that already adhere to this format in 2021 include the Brafa pre-modern art fair, which is usually held in Brussels, but this year its 126 exhibitors are individually exhibited in 37 cities (preview from January 27).

The website will serve as a back-up resource for all proposed work. Frieze Los Angeles plans a similar approach in July when it will place galleries in architecturally significant buildings – although the logistics of getting around Los Angeles during the height of summer could make a sale difficult.

Locally, it will become difficult to distinguish such events from existing gallery weekends or art weeks. But boundaries are blurring for some time in all areas of the art market. It will be a case of survival of the fittest. Trade shows will simply need to prove that their brands, networks, and organizational strengths complement each other, which seems plausible at this stage.

Auction houses seemed to be more readily adapting to virtual business in 2020, but their management also acknowledges that merchandise does bring in merchandise based on real event sales. There will be many more auctions on the Internet and using new live streaming technology than in the previous years – not least because management has invested heavily in some high-tech solutions.

But where it is possible, and of course with more expensive items, auction houses will try to regain personal interest. Optimists say that in terms of activity, supply will return, in part because discretionary sellers have been sitting idly by for most of the year – although pessimists are worried that there will be more sellers, forced sellers, which will lower prices and undermine the art market confidence.

Christie’s is offering three major surreal paintings in March for a total valuation of £ 32 million. Setting aside the thorny issue of Brexit and its many unknowns, the global political uncertainty affecting the art market will generally diminish in 2021, now that the controversial US elections are nearly over.

Cerutti notes that the forced transition to the Internet has drawn a new generation of buyers. Christie’s has reported that 40% of shoppers have connected to the network since March 2020, of which 32% are millennials. Buyers in Asia have been particularly active, with the younger generation buying between $ 50,000 and $ 500,000.

Most of them came to the art market through luxury goods, says Ben Clarke of art advisor Gurr Jones, another field that will continue to expand into the visual arts world.

There was a great buzz about the art market interruption caused by the pandemic. Hopefully, some of the more inventive collaborations will continue.

Videography Of A Unique Phenomen – Cloud Inversion Inside the Grand Canyon