British artist Cecily Brown (b.1969) is a rare phenomenon of artists representing the beautiful half of humanity, who managed to become not only widely known and loved by the public but also became famous as one of the most expensive artists of our time.

1. “The girl who had everything”

In 2017, at Sotheby’s in London, her work “The girl who had everything” was sold for a record 1,868,750 pounds, while the upper limit of the pre-auction estimate was 1,200,000 pounds.
Expressive abstractionism – this is the style in which Cecily paints. “The Girl Who Had Everything” is done in an expressive technique with large strokes in pink and red.

In many ways, the style of Cecily Brown reminds Francis Bacon in his mysticism and poorly distinguishable fragments of human bodies.

For “fresh enough” by auction standards the painting, its origin is impressive. Before being auctioned at Sotheby’s, it was in three private collections in London, including the Victoria Miro Gallery and the Saatchi Collection.

2. “A Swan Comforting A Snake”

For example, in March 2018, at the Sotheby’s evening auction in London, Cecily Brown’s painting “A SWAN COMFORTING A SNAKE” (Swan Soothing Snake) was sold for 1,209,000 pounds, slightly failing to reach the estimated value of 1,500,000 pounds.

The fame of British artist Cecily Brown is largely due not only to her talent but also to the patronage of perhaps the most famous art dealer and gallery owner Lawrence Gilbert “Larry” Gagosian. The collaboration began in 1998 and lasted about 15 years until the artist stated that despite all her love for Larry, it would be more useful for her works to “appear in a different context”.
Brown is often referred to as the follower of expressionists Oscar Kokoshka and Willem de Kooning, as well as the more modern trading leader Francis Bacon. The artist met him personally in her youth thanks to her father, an art critic and curator David Sylvester. Brown is often seen in the light of feminist art – in her large-format canvases, one can feel the power and passion for which she is loved by both the viewer and the buyer.

The artist herself often gives her works the names of Hollywood movies – so, her “Pajama Game” was sold at Christie’s in 2007 for $1.6 million.

British artist Cecily Brown who lives in New York is known for her freestyle of painting, which combines abstract art and figurative. She studied at the Slade School of Fine Art. Since 2014, she has been a member of the Board of Directors of the Contemporary Art Foundation. She calls her work fragmented and chaotic, just like life in New York.
Cecily often uses newspaper photos and news stories as the basis for her paintings. “For me, painting is a way to get information about the world.” The theme of the paintings is a pronounced feminist pathos, sexual overtones, and concern for the modern world, where women are still being told what to do with their own bodies. One of the last solo exhibitions was recently held at Paula Cooper Gallery. 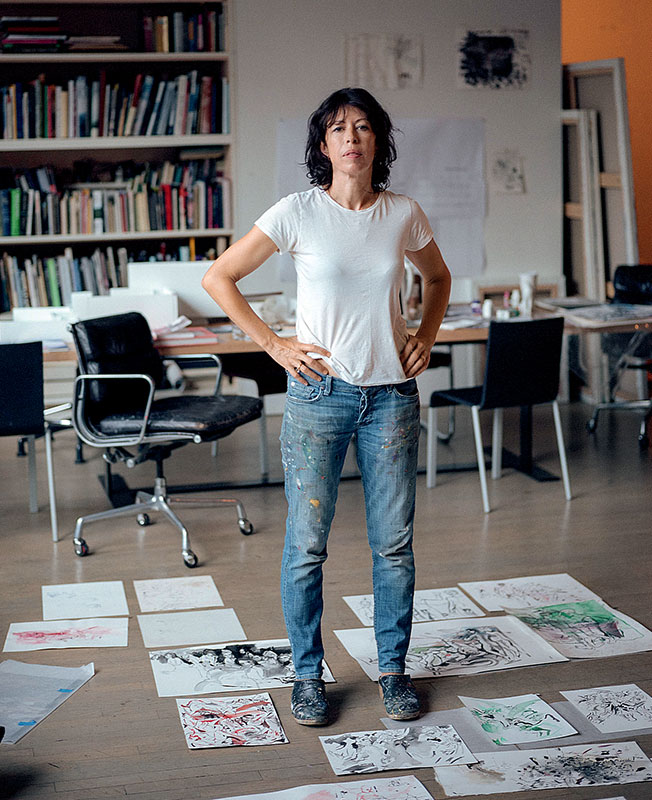 In May 2020 the painting “Figures in Scale 1” by Cecily Brown was sold for $ 5.5 million. This is the second biggest record for gallery sales of the artist, who was nicknamed “De Kooning in a Skirt”.

In 2018, her painting “Suddenly Last Summer” was also suddenly sold at an auction Sotheby’s for $ 6.776 million, all because the work of Cecily is filled with emotion and expression, which so attracts collectors of contemporary art.

According to the auction house, Christie’s painting “Night Passage” (1999) was sold for an impressive amount of 3,131,250 pounds.

The paintings are like suddenly opened doors, behind which hides something shocking. Because they are so energetic, they can also be seen as moments in a film whose sudden stop makes the mental eye stumble in its own insatiable, tangled in the dense webs of coloured light, seeking to mark the order of intense and disordered sensations.

A sensual space of color and texture stretching almost three meters wide, the “Night Passage” is a complex early work by Cecily Brown. Following the mantra of Willem de Kooning that ‘flesh was the reason for the invention of oil paint’, its dense, visceral surfaces were charged with eroticism.

The composition moves between abstract and figurative registers, causing tempting human forms that disappear and become out of focus. Represented by warm spectra of yellow and red tones filling the plane of the painting, a lively physical joy.

Brown spoke of her desire to embrace an abstract sense of transition, realization, and revelation. ‘I think that painting is a kind of alchemy,’ she explained. …paint turns into an image and hopefully, paints and images turn into a third and new thing… …I want to catch something in the act something else.

The painting by Cecily Brown “Hard, Fast and Beautiful” radiates simple elegance: charcoal scraps and white gestures, reminiscent of life or painting, contain a more carnal impression. Cecily Brown approaches this abstraction as the result of two lovers riding on canvas. The high-quality fantasy Yves Klein dreamed of and enjoyed completely from the girl’s point of view.

Taking the title of Tennessee Williams’ play “The Fugitive Kind” for her painting, Cecily Brown literally seduces the audience. Brown uses the painting of abstract expressionism to convey not only raw emotions but also a bodily sense of connection between painting, idea, and viewer. Cecily Brown takes advantage of the density of his environment: the ability of paint to reproduce physical sensations: and the dramatic illusion of movement. Inside her voluptuous surfaces, epic fantasies spontaneously unfold as if each brush stroke contained a dark secret: lush, grainy, and stained with sin.

Cecily Brown’s young lovers melt in the foliage, merging with the landscape in the heat of the moment. Everything in Brown’s painting flashes with sexual appeal, from soft pastel tones to oil-wet plasticity of the surface. Cecily Brown knows that desire lies in flirting: against the background of her fervent gestural abstraction, a glimpse of suggestion is enough.

Helen - August 13, 2020 0
The American School of Arts and Museum of Art Barnes Foundation opened after quarantine with a large-scale exhibition of works from the collection of...