The NYC subway isn’t exactly a favorite place for city dwellers to passing their time, but it is indeed a vital means of transportation and also plays an important role in the city’s creative history. From early graffiti artists to contemporary photographers, the art on display in the underground was often as exciting as what happens above.

Now, to celebrate the recent Video Music Awards (which aired on Sunday, with most of the celebrity performances filmed in advance), two MTV employees decided to put on a pop-up art show featuring BIPOC and LGBTQ + artists.

Inspired by the uprising in support of the Black Lives Matter movement, Antonia Baker and Rich Tu asked eight local artists to create works on themes of music, space, unity, and the future, as well as their personal experiences.

There were such artists as Eva Zar, Amica Cooper, Bronson Farr, Eugenia Mello, Kerwin Brissot, MorcosKey, and Zipeng Zhu. The installation will run until September 6 at the Atlantic Terminal subway station in Brooklyn.

See the photos of the exhibition below.

Brooklyn is a large borough in New York. Bushwick is one of the disadvantaged areas of Brooklyn, which in recent years, is rapidly turning into a cultural enclave and a concentration of street art artists. Here are hundreds of works, different genres, and artists from all over the world.

Moreover, Bushwick is not limited to graffiti and murals. Here, you have to look both ways: art – objects are found on wires overhead, on poles and on windows of houses, on roofs and even on trees. And the people walking here are sometimes dressed in such a way that they themselves can claim the title of the art object.

In New York, graffiti is ubiquitous, but the best works are concentrated in the most hipster area of the city – Bushwick.

Many artists are specially invited by the city authorities. They arrange exhibitions for them. Artists from all over the world come to Bushwick precisely to live and work with people like themselves.

Bushwick Collective is a kind of gallery of street art, with a large space of several blocks and unusually beautiful graffiti. This graffiti is constantly changing. Therefore, if one day, you want to get acquainted with the Brooklyn art and plan a walk in Bushwick, it will surely open up to you completely different. 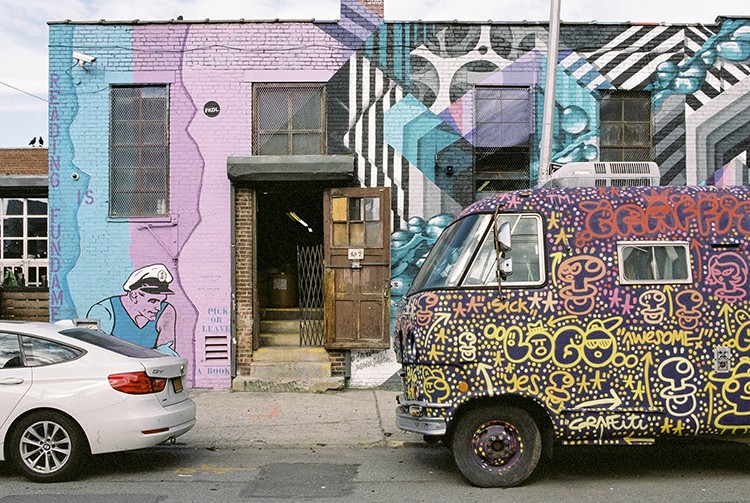 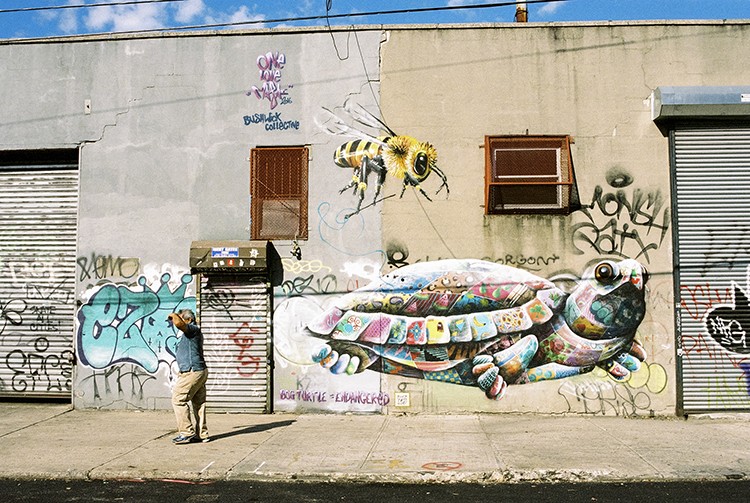 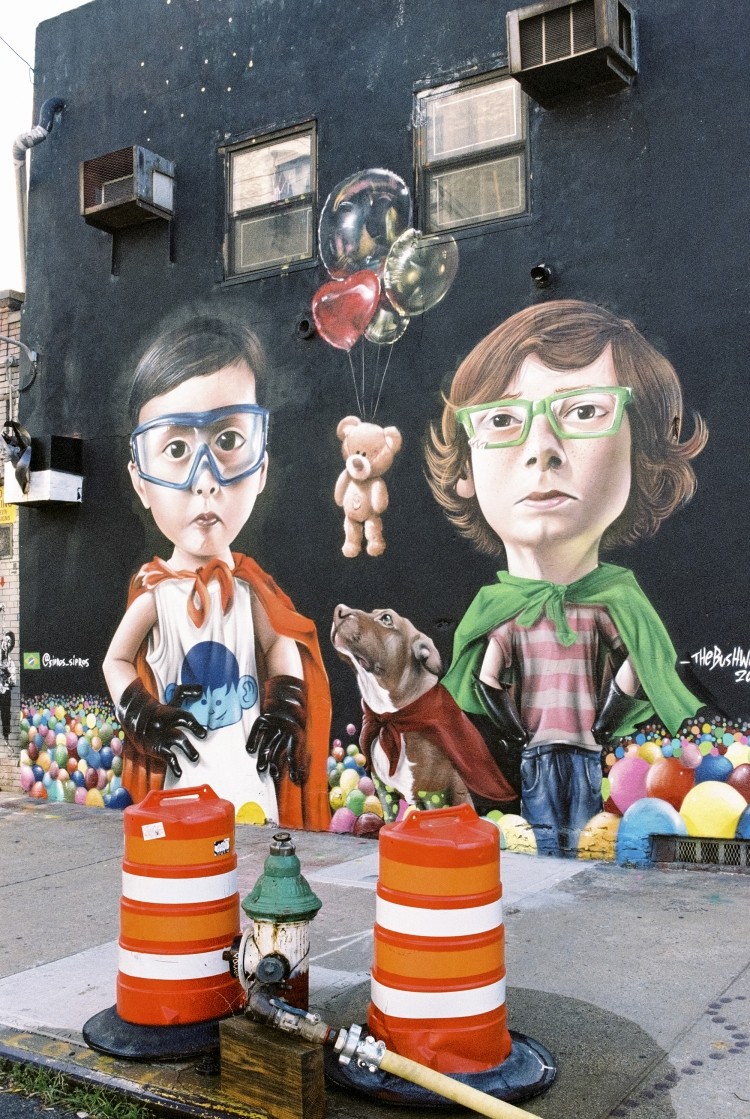 The Brooklyn Museum of Art is the third-largest art museum in New York City. Its collection includes about 1.5 million works and exhibits. Visitors to the museum note in a special way the rich halls of Egyptian and African culture, admire the collection of classics and sculptures, and there are also temporary exhibitions of contemporary art. In addition, the museum building itself, made in the style of Bose art, is a striking landmark in Brooklyn.

Leroy’s Place is a Brooklyn art gallery where paintings come to life. Leroy’s Place invites you to plunge into their paintings with large-scale immersive installations. Visitors can shop in the world of Leroy’s Place with a carefully curated collection of handcrafted gifts alongside original artwork. Leroy’s Place aims to create community through events in the space and to use the Gallery as an incubator for collaborations with established and emerging artists. 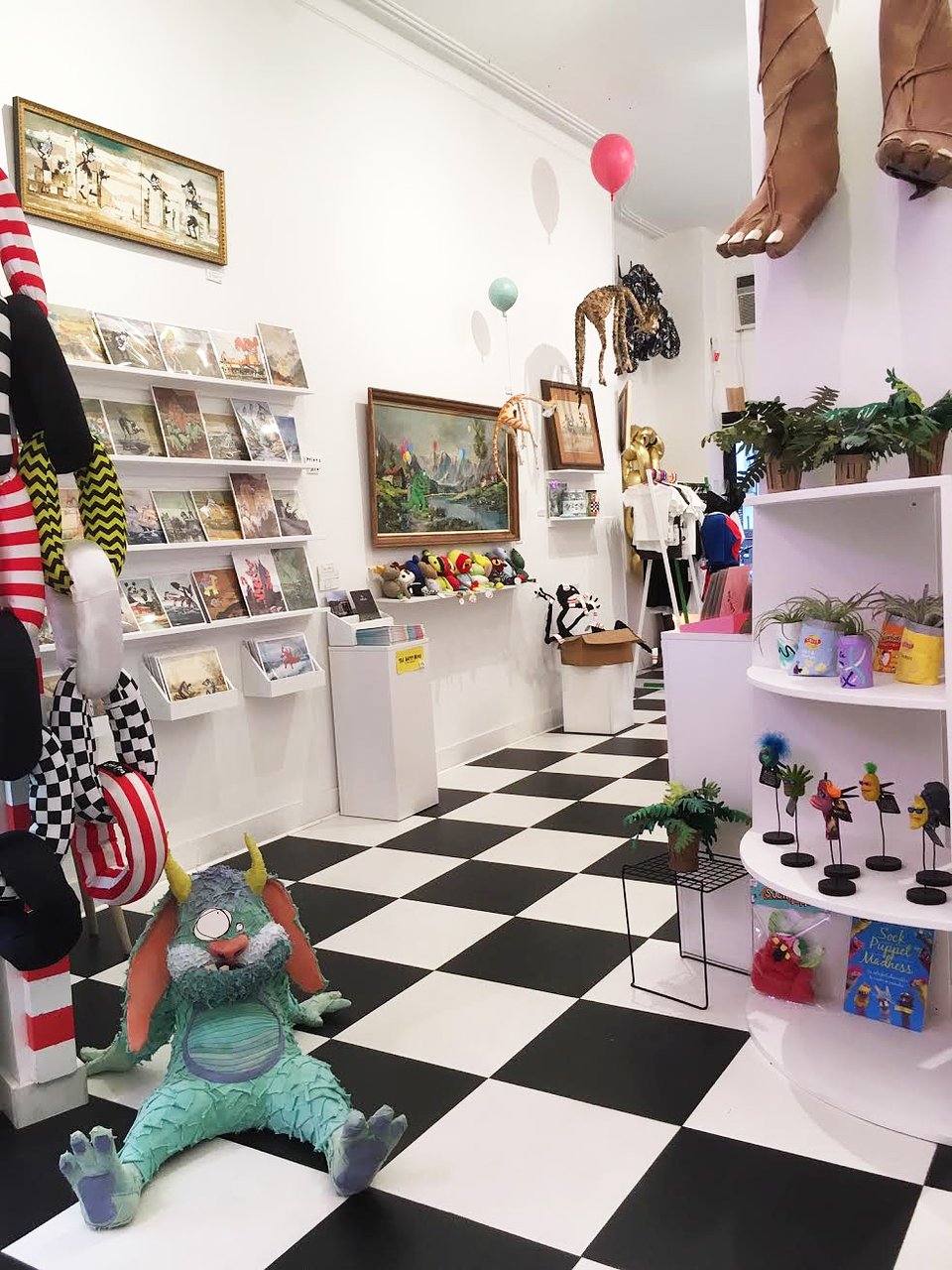 Clover’s Fine Art Gallery, a premier contemporary art space located on historic Atlantic Avenue in downtown Brooklyn, is dedicated to showcasing and promoting art from both emerging and established artists from a variety of backgrounds. Clover’s is more than an art gallery. It is a multinational establishment with a specialty café and gift shop. This Brooklyn art gallery is a pristine, elegant loft-style space.

The most famous street artworks in Brooklyn

In addition to traditional Brooklyn art galleries, there is an unusual exhibition that can amaze even the most seasoned tourists. Now, it goes about the Bushwick Collective. We have already told about it below. Let’s take a closer look at some of the works.

This is a work by Chilean artist Dasic Fernandez in Brooklyn. It’s called On the Rooftop. Fernandez is originally from the Chilean capital Santiago, but lives and works in New York. 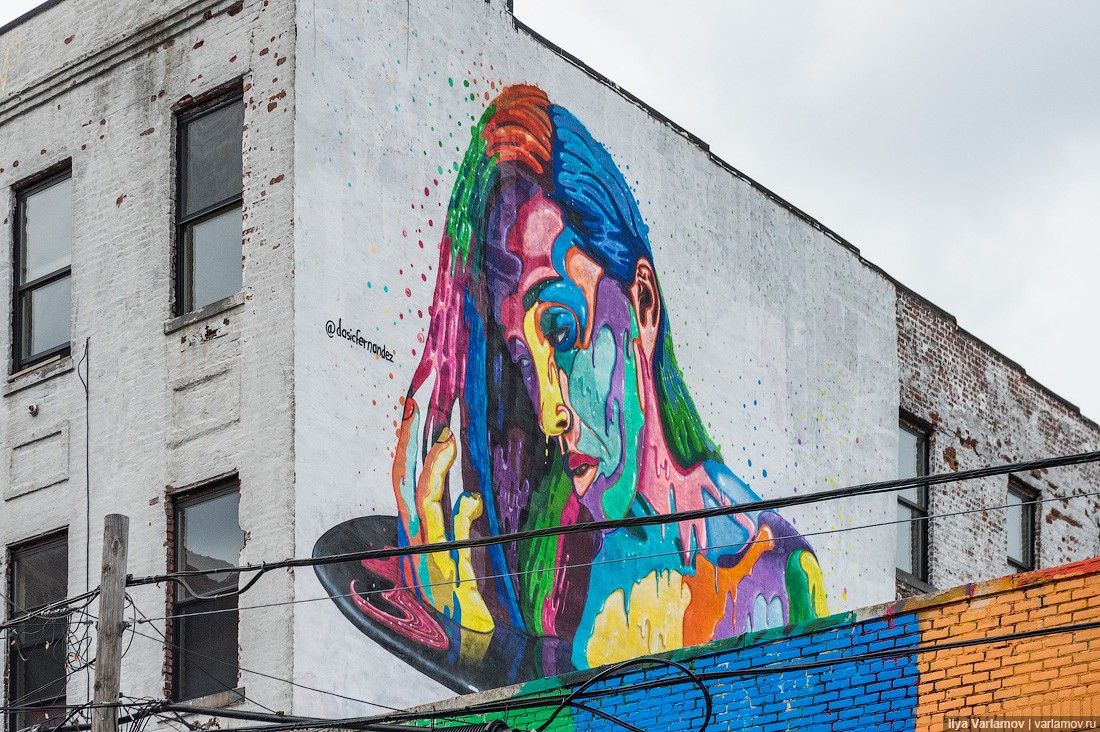 Artist Jesus Saves says that he was born in New York and grew up on graffiti, and took a strange pseudonym in 1995 when he dedicated his life to God. However, he insists that he is not religious. According to the artist, he experienced drug problems, ended up first on the street and then in the hospital, but God gave him another chance. It was in Bushwick that he began painting in graffiti. Jesus Saves says his neighborhood was very dark (literally) and with his work he tried to light up it and give people hope. 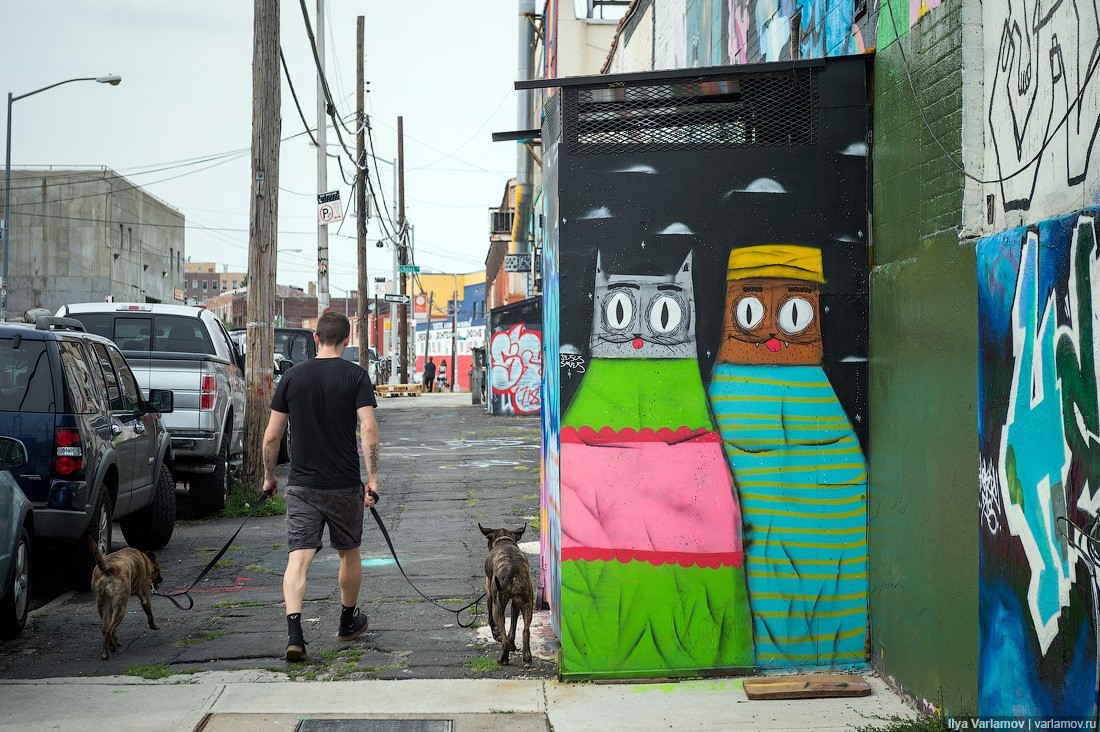 Painting by another Bushwick native, the Puerto Rican Nepo, assisted by his friend El Coro. Nepo says that he doesn’t care which surface to paint on, but the place where the painting appears matters: it should attract people. However, the artist admits that he enjoys working with shutters. 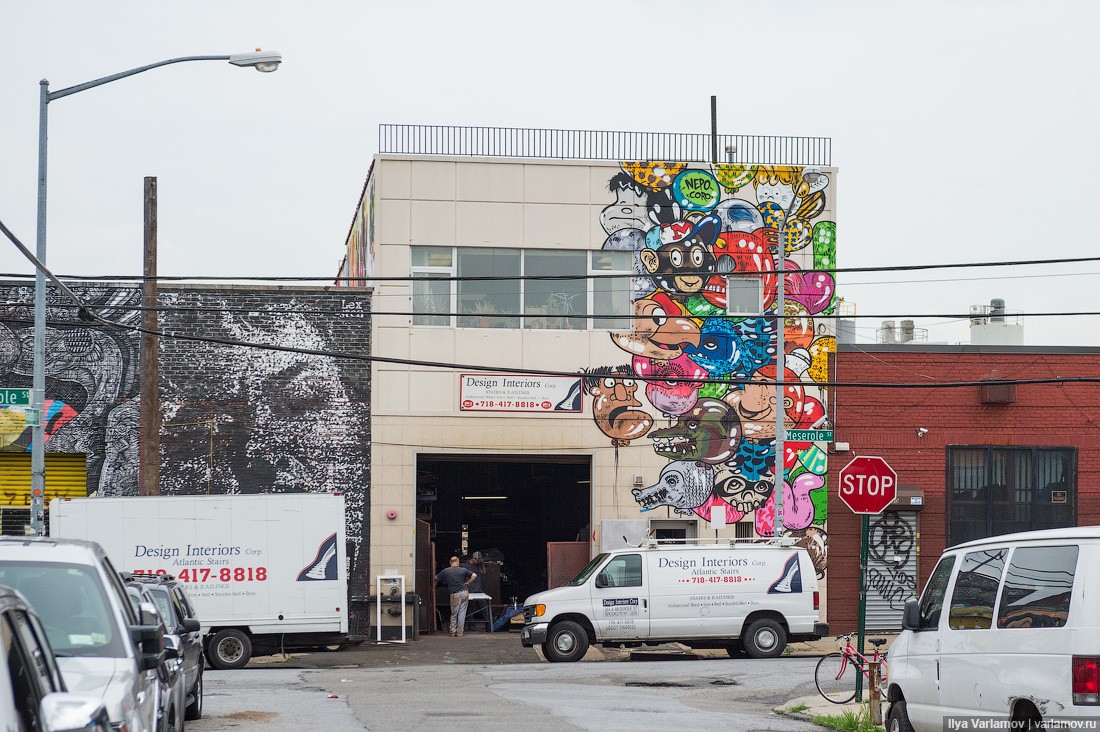 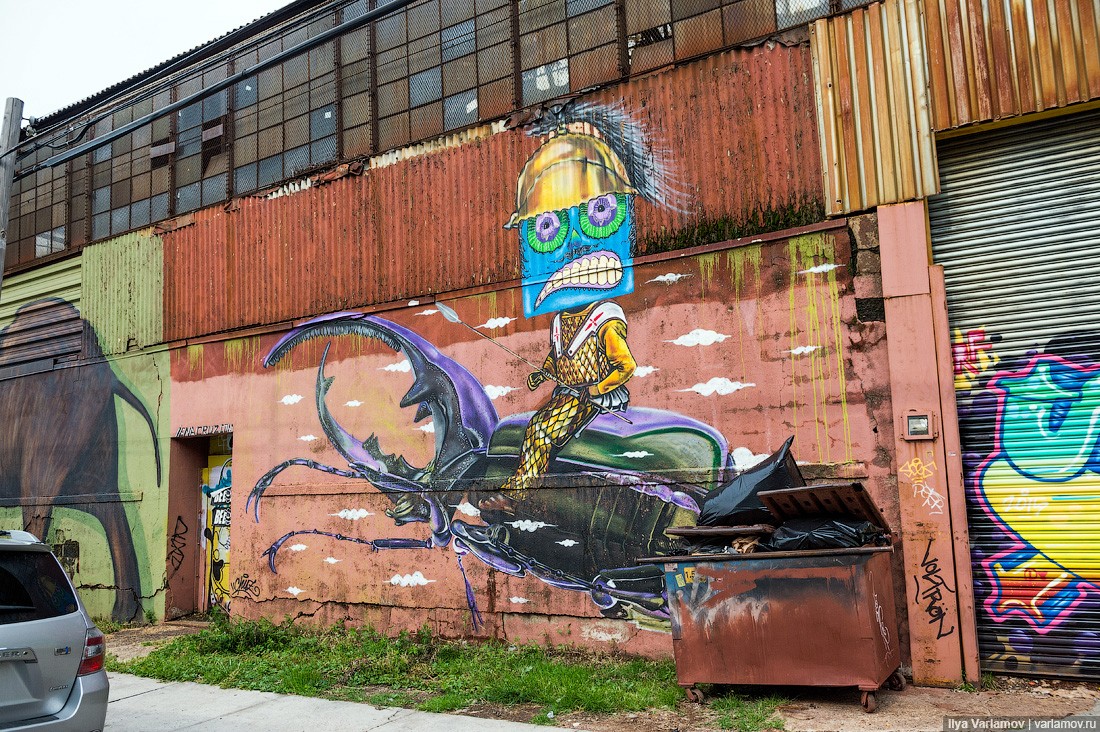 One of the works for the Bushwick Collective is an open-air street art gallery that “exhibits” artists from all over the world. 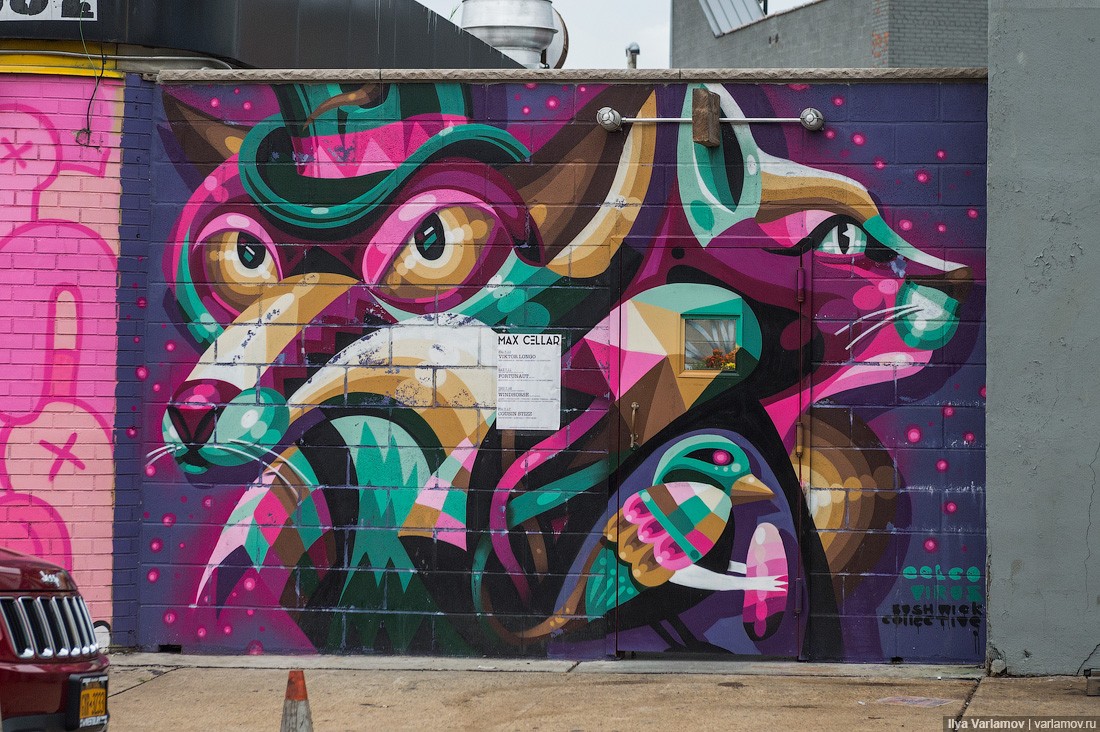 One of the world coolest neighborhoods 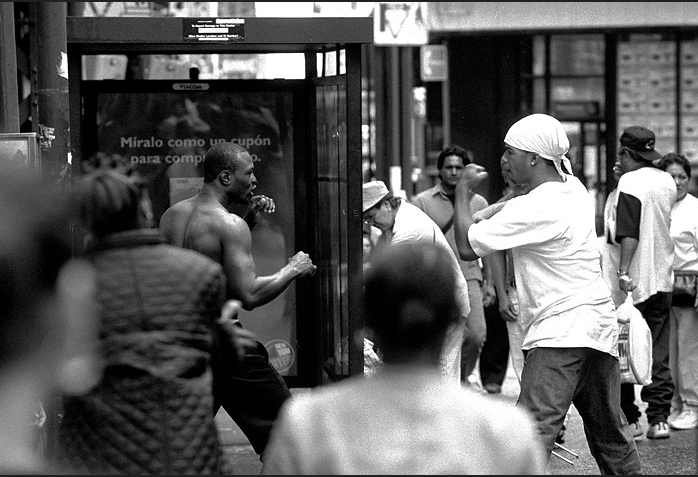 Of course, one can argue with this. But this area has been transformed in just a few years. And it should be respected.

Bushwick was originally an agricultural area – vegetables, fruits, and tobacco were grown here. But Brooklyn expanded rapidly, and industry came to Bushwick in the 19th century. Sugar factories, glass, glue, chemicals, and breweries were built here.

At the time, fourteen breweries operated here, which produced almost 10% of all beer consumed in the United States. The industry grew, the well-being of local residents also grew. At that time, about 20 blocks of mansions were built in the area.

The area flourished during the First World War. However, transportation became cheaper. For Bushwick’s industry, this became critical. Plants were closed.

In the 1950s, flows of African Americans and Puerto Ricans poured in here. In the 70s, the whole of New York was in a deplorable state, and Bushwick was no exception – here, as in the Bronx, houses were fired to get money from insurance companies, crime flourished on the streets, gangs destroyed shops and businesses.

In the mid-70s, half of all residents of the district lived below the poverty line and received government benefits. The culmination came in July 1977, when, during a huge pogrom, Bushwick was essentially destroyed by arson and looting.

Bushwick has gone from a neat neighborhood of wooden houses to a mixture of empty land, abandoned buildings, drugs, and arson. The once-wealthy area has become an urban slum. 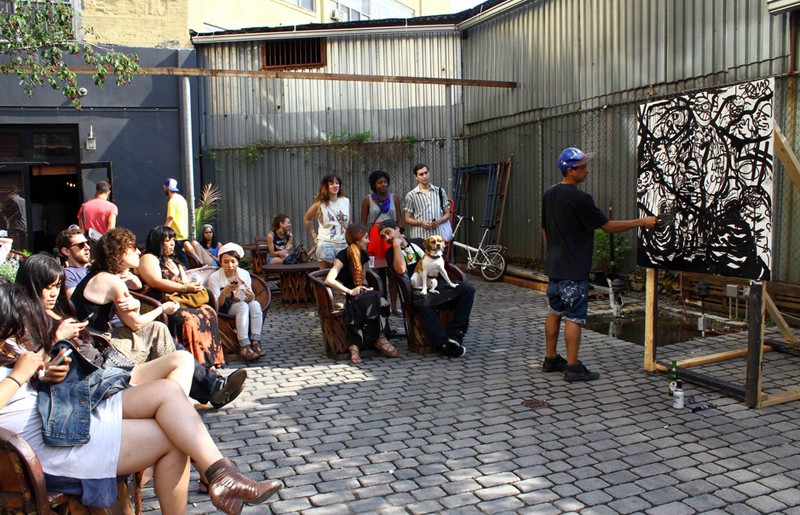 This continued until the mid-2000s. It was then that the city authorities revived the area a little, the crime rate dropped, drug addicts were dispersed, and it became clear that there are many empty buildings, including industrial zones, with large halls that are quite suitable for creative workshops.

Renting housing and workspaces at that time was worth a penny. And creative youth, who could not afford Manhattan prices, reached here. In a matter of years, Bushwick became a haven for painters, sculptors, and artists.

Now this place is literally teeming with art galleries and studios, performances and shows are held in former factories, art festivals are held here, one of the most popular is Bushwick Open Studios when all artists open their studios to guests. Almost every week, a new restaurant or bar opens in the area.