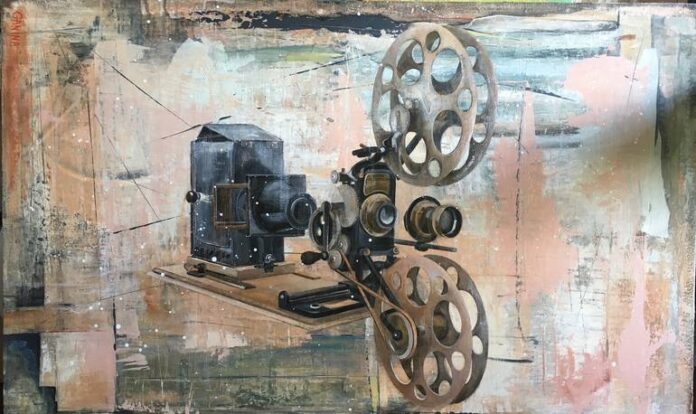 Art, cinema and painting: at first glance these three artistic fields seem completely separate from one another. However these seemingly hermetic fields are very intimately intertwined. Since the creation of cinema in 1895, art and cinema have influenced each other and embraced similar goals. Some art critics have even stated that the entire history of art could be recreated in a film. We will present a look at the ways that art and cinema are so intimately linked.

Art, cinema and painting: Historical evolution and interpretation of different formes of art

The Renoir family: Bringing together art, cinema and painting

Cinema was invented when the Impressionist movement in painting was at its peak. This movement had a great impact on cinema as individuals experimenting in this new media took inspiration from the great Impressionist painters: Manet, Cézanne, Degas, Monet, Caillebotte and Pissarro. Manet and his father, Auguste, heavily influenced the famous filmmaker Jean Renoir. For example, many scenes in Renoir’s film Une Partie de Campagne (1936) – an adaptation of Guy de Maupassant’s short story by the same name – make reference to the Impressionist period.

From Murnau to Fritz Lang

The Expressionist movement that took place during the early stages of cinematography between the two world wars produced masterpieces such as Friedrich Wilhelm Murnau’s Nosferatu (1922) and Robert Wiene’s The Cabinet of Dr. Caligari (1920). Fritz Lang’s ground-breaking Metropolis (1927), The Testament of Dr. Mabuse (1933) and M (1931) took inspiration from the New Objectivity painting movement, an outgrowth of Expressionism that was dominated by painters like Max Beckmann, Otto Dix, Emil Nolde, Vassily Kandinsky and George Grosz. The American painter Edward Hopper was inspired by Expressionist cinema (1930-1940). Hopper’s compositions and use of light reflect those found in the films created during this time, imbuing his paintings with a very cinematic quality that had never before been seen in painting.

Thomas Edison and the Lumière brothers created the first films in 1891. Since its invention, cinema’s capacity to capture life and transcribe stories has pushed it to the forefront of the creative sector.

Following in the footsteps of photography, which was becoming an increasingly popular artistic medium, Italian futurism advocated the advent of technology and industrialization. The film Thaïs directed by Anton Giulio Bragaglia (1917) is a good example of art melding with cinema, particularly through the use of high-contrast and geometric lines used in the sets.

In the 1920s, the Dadaists felt that cinema was a perfect fit for their artistic vision. Many artists experimented in experimental cinema in order to study rhythm and movement, such as Hans Richter (Rhythmus 21, 1921), René Clair and Francis Picabia (Entr’acte, 1924), Man Ray (Return to Reason, 1923) and Fernand Léger and Dudley Murphy (Ballet Mécanique, 1924). The surrealists followed in the Dadaist’s footsteps, a prime example of Surrealist film is Luis Buñuel’s An Andalusian Dog (1929).

Hitchcock and his predecessors

During the 1950s and 1960s, the relationship between art and cinema increased with ground-breaking directors such as Alfred Hitchcock, François Truffaut and Jean-Luc Godard who were fans of the painter Edward Hopper. The French director Henri-Georges Clouzot’s passion for art can be seen in his films L’Enfer (1964) and La Prisonnière (1968).

Fine art photographer Gregory Crewdson brings Lynch’s interest in the mystery of the quotidian life into his large format staged photographs that use teams of assistants and film lighting crew to bring his creations to life. His work is a fresh amalgamation of Lynch meets Hopper, tying together several artistic media cinema, painting, and photography.

The following are prime examples of art and cinema in art history:

Andy Warhol, an illustrious figure of American Pop Art, was inspired by cinema. He ran in the same circles as Marilyn Monroe and Liz Taylor and even created several films, including: Sleep (1963) and Vinyl (1965).

Video art is an art form that uses video technology as an artistic medium. Actors are not always present in this style of art, which can take many formes: installations, online streaming, performances and projections. Some renowned works of video art include Sophie Calle’s No Sex Last Night (1995) and videos by Chantal Akerman, Larry Clark and Bill Viola. In France, Jean-Christophe Averty is known for bringing video art to the masses on TV.

On the big screen, art, cinema and painting are often intertwined in the form of biopics, this cinematographic genre retraces or adapts the lives of famous people. There have been an increasing number of films of this genre since the 1990s. Biopics have become increasingly popular since the 1990s. Artalistic has rounded up a short list of films that are well worth watching:

– Lust for Life (1956) by Vincente Minnelli and George Cukor

– Little Ashes (2008) a film about Salvador Dali by Paul Morrison

– Mr Turner (2014) a film about the last years of the British painter J.M.W. Turner’s life

Our list of moves to see is very short; there are countless films about art, cinema and painting.