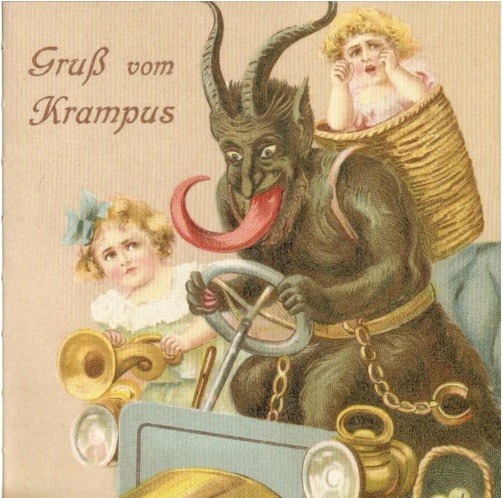 Let’s take a journey through the ages and explore the festive attributes of past epochs. One of the brightest was Victorian – dark and mysterious, shrouded in some special mysticism and otherworldly spirit that penetrated into everything, even greeting cards!

If you suddenly find some modern holidays bizarre, you just haven’t seen 19th-century Victorian Christmas cards that were as scary as those gloomy times. 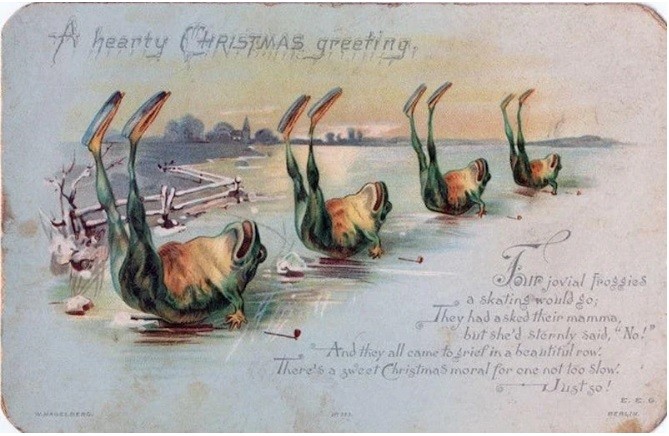 Until the early 19th century, Christmas was not a particularly popular holiday in England. At the same time, there appeared a corresponding iconography with gifts, snow, St. Nicholas… Along with Christian motifs, there were more ancient – pagan. But the essence of some cards was lost in the centuries and has not reached our days: most likely, it is allusions to unsaved poems or stories.

In the pre-Victorian era, the celebration of Christmas in Britain and other English-speaking countries was very modest. It was only during the reign of Queen Victoria and her husband, the German king Albert, that Christmas became a real holiday, which is still celebrated today. Thus, it is the Victorian era that we owe the appearance of most popular Christmas traditions, such as the giving of cards, souvenirs, and gifts.

However, in the Victorian era, there were traditions that would seem rather strange to us today. Most of them, unfortunately (and in some cases, fortunately), have not survived.

The Victorian Age in Britain was famous for its strangeness, ranging from photographs of dead babies, a passion for spiritualism, and ending with these ambiguous Christmas cards. 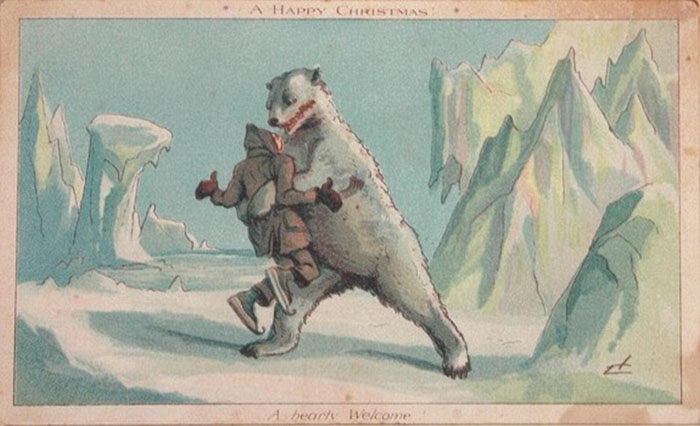 In the Victorian era, the very first Christmas card was created. It was painted by the English artist John Calcott Horsley at the request of his rich friend Sir Henry Cole. The idea of creating a Christmas card came to Cole after he realized that he was too busy to write his own Christmas greetings for all family members, friends, and colleagues. Cole felt confident that a picture postcard with a Christmas greeting would be a much easier way to congratulate all relatives and friends.

In 1843, Cole printed and put up for sale the first thousand new Christmas cards. But they didn’t immediately gain popularity. Supporters of a sober lifestyle even scolded them, believing that the images of drinking scenes that were available on some copies promoted drinking.

A year later, however, Christmas cards began to be an incredible success. Soon they became extremely diverse – largely because each artist had his or her own perspective on what the perfect Christmas card should be. Some new cards were painted in Victorian Valentine’s style – cherubs, flowers, and other symbols of spring and new life. But there were other cards, stranger and scarier: with images of a sinister clown poking a police officer with a red poker, giant deadly wasps chasing children, or gambling monkeys. 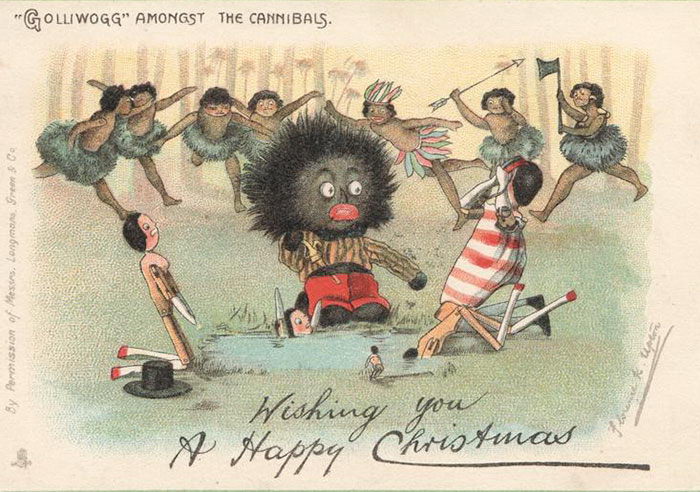 Pinched turkeys roast the unfortunate under the cheerful shouts of “Merry Christmas and New Year” and the approving smile of a strange round creature. 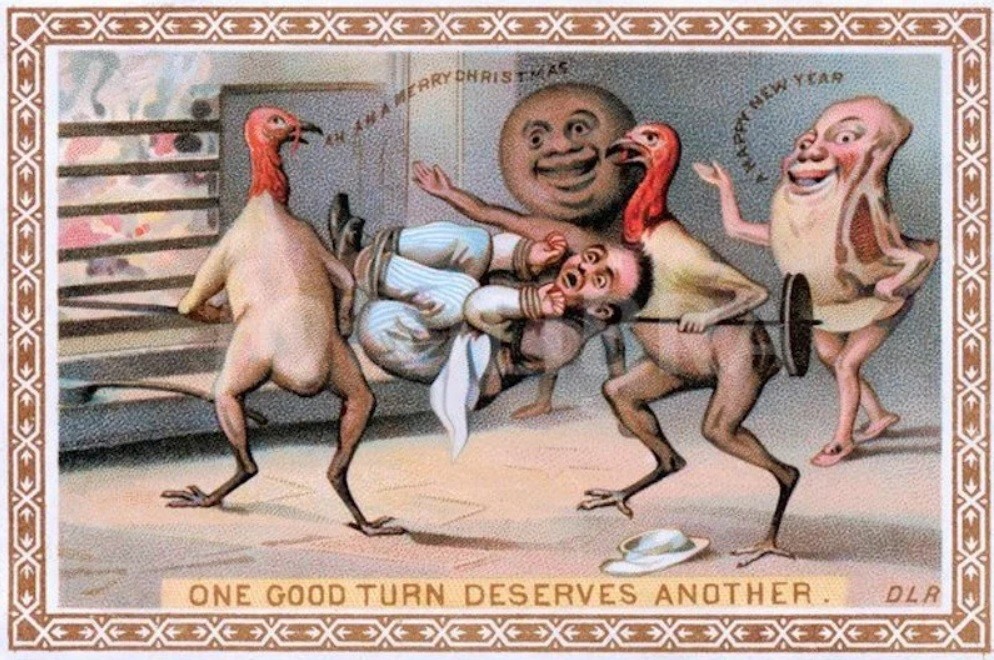 Plum pudding is a traditional Christmas treat in Britain. But sometimes something goes wrong… 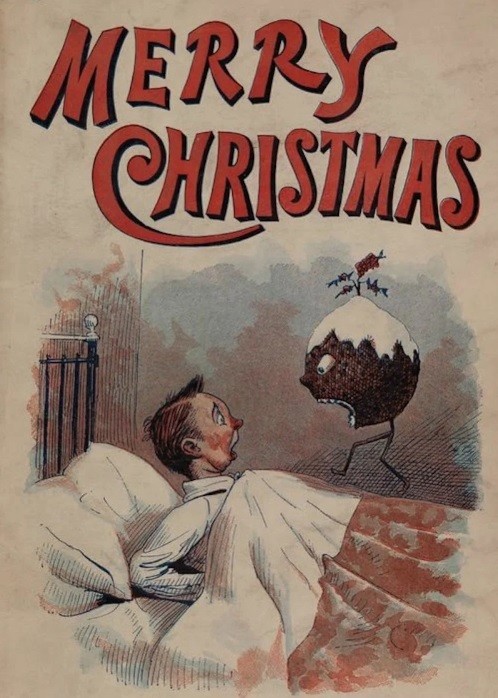 Dead birds are often seen on Victorian postcards. It’s a strange holiday symbol, isn’t it? Some believe that dead birds symbolize children who have frozen to death in the forest. Postcards were supposed to evoke a sense of compassion among the gifted. According to another version, it was a kind of wish of happiness and good luck, because to kill the king or the thrush in December was considered a good example. 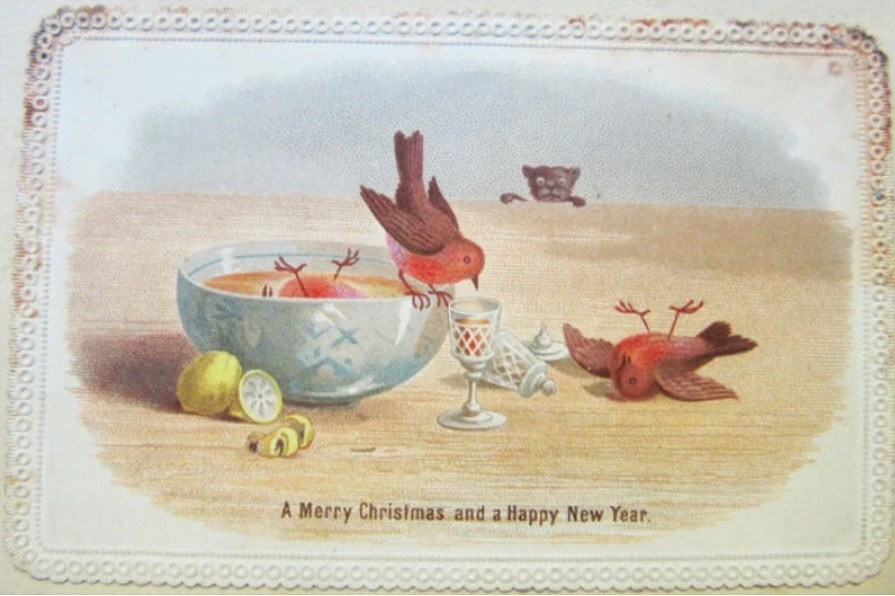 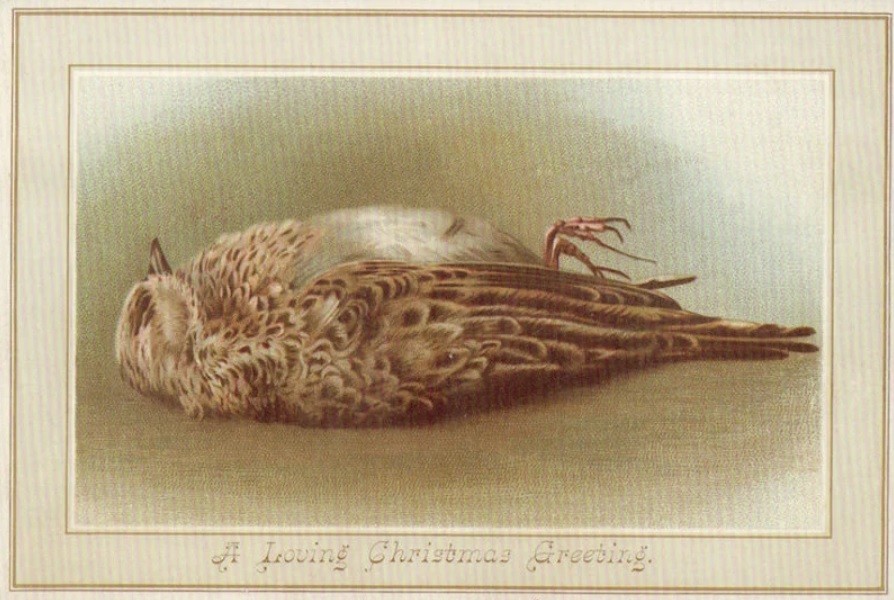 There’s definitely something wrong with this Santa Claus. Or somebody wished this boy for Christmas. 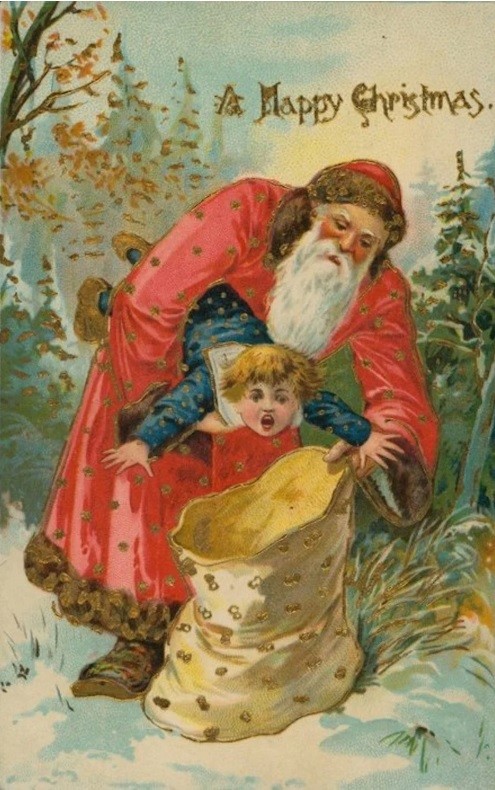 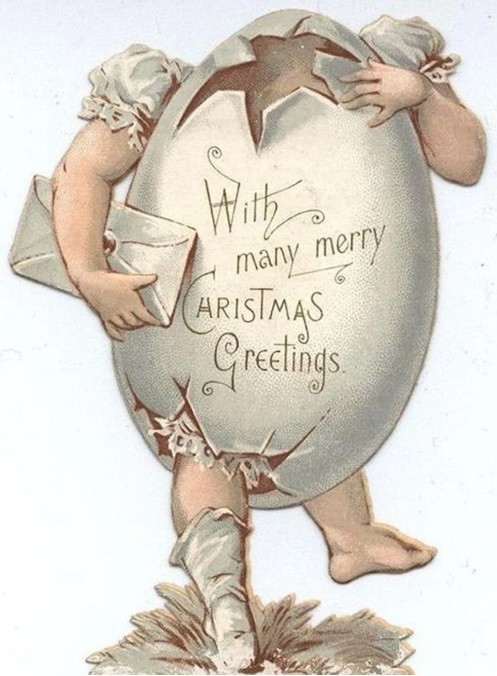 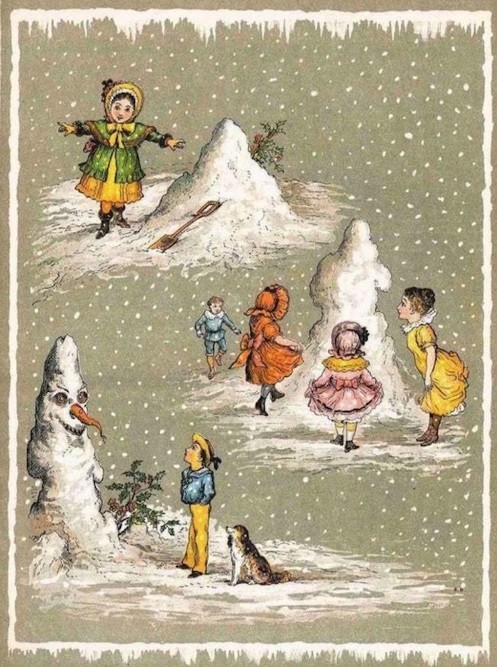 After reviewing these Christmas cards, you might be interested to know why the Victorian era was so creepy, and although there are no exact answers to this question, we have found some pretty good hints as to why. For starters, life expectancy in Victorian England was incredibly low, as the middle class had about 45 years to live, workers only half, and children were lucky enough to survive their 5 birthdays.

So the daily funeral processions were not unusual, and you could not scare a Victorian with death or all the terrible feelings that followed. In addition to the high mortality rate, Victorian people were very sexually depressed and embarrassed. So much so that women were not allowed to ride horses just like men, so as not to cause any female passion. On the other hand, Victorian men were so excited that the curved legs of the tables were seen as sexy and often covered with a special cloth. So here is a mixture of fatal passion and sexual frustration, probably, and made the Victorian era as eerie as it was. 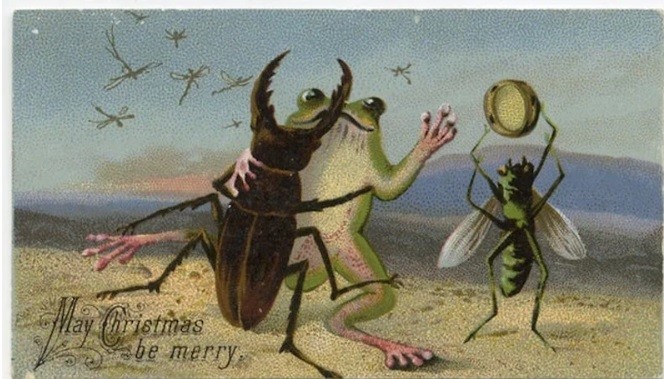 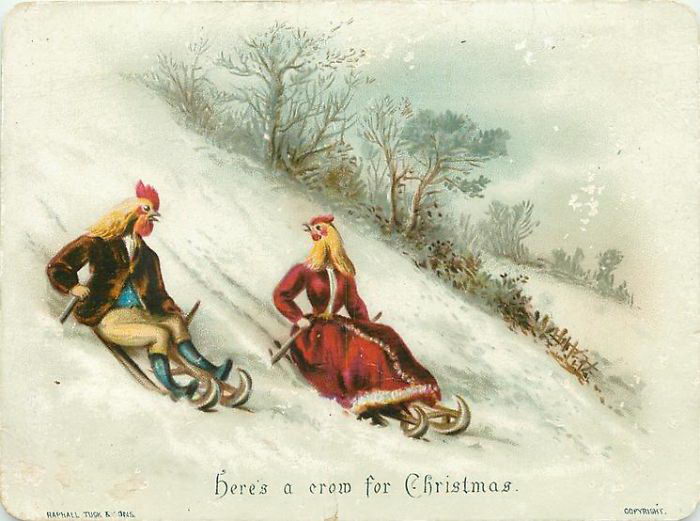 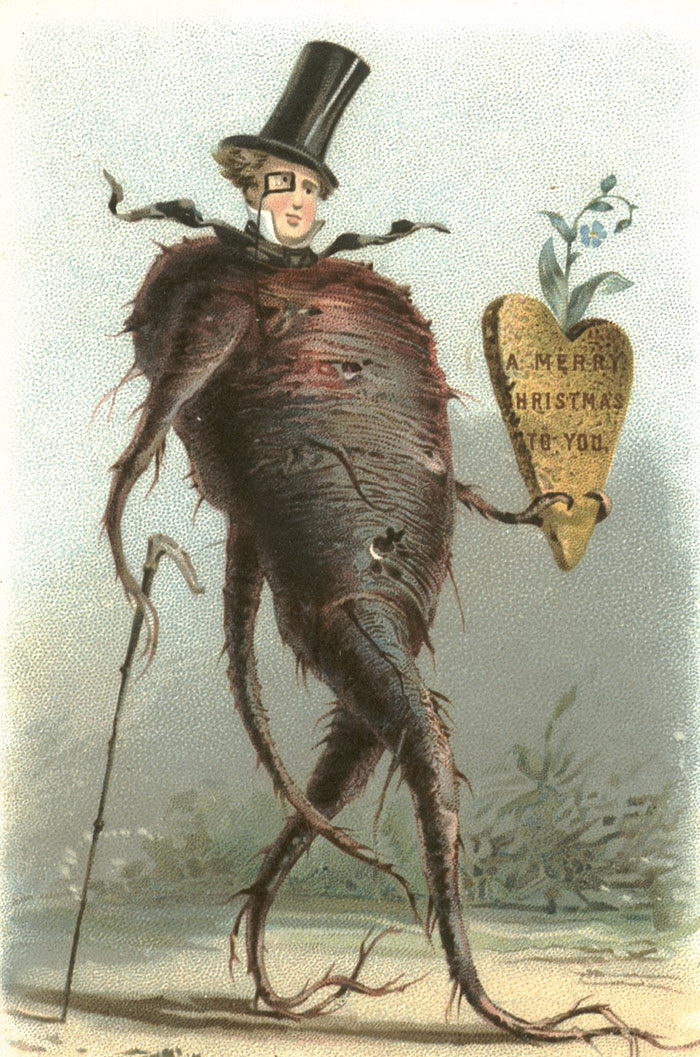 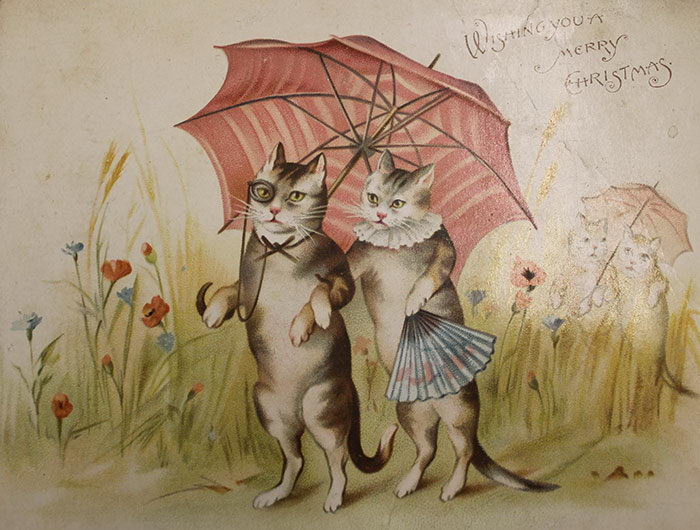 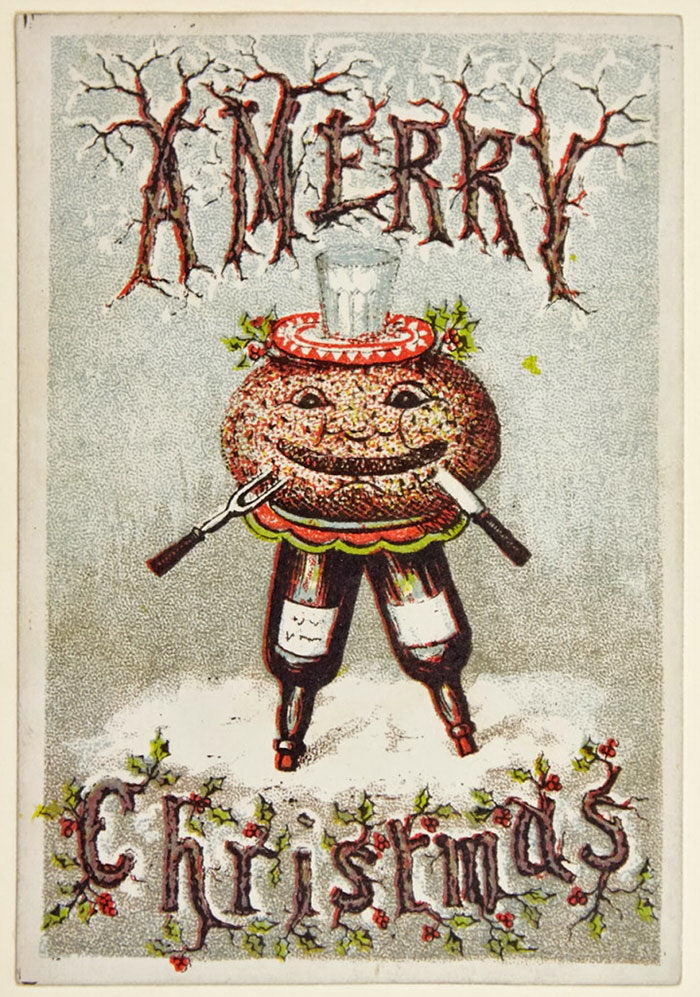 In England, postcards have become an inexpensive and thoughtful way to tell or hint about love.
By 1895, just over fifty years after the first postcard was printed in England, almost a quarter of a million different variations had appeared on the market. Still, how little more do we know about the customs and culture of those times! And the famous English humor was not suddenly born, it was honed for generations. 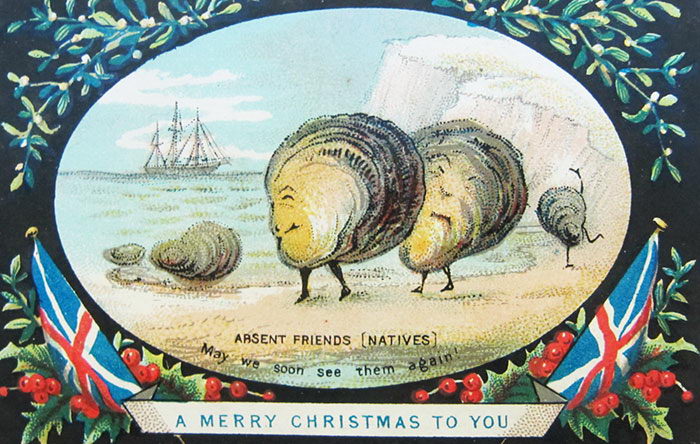 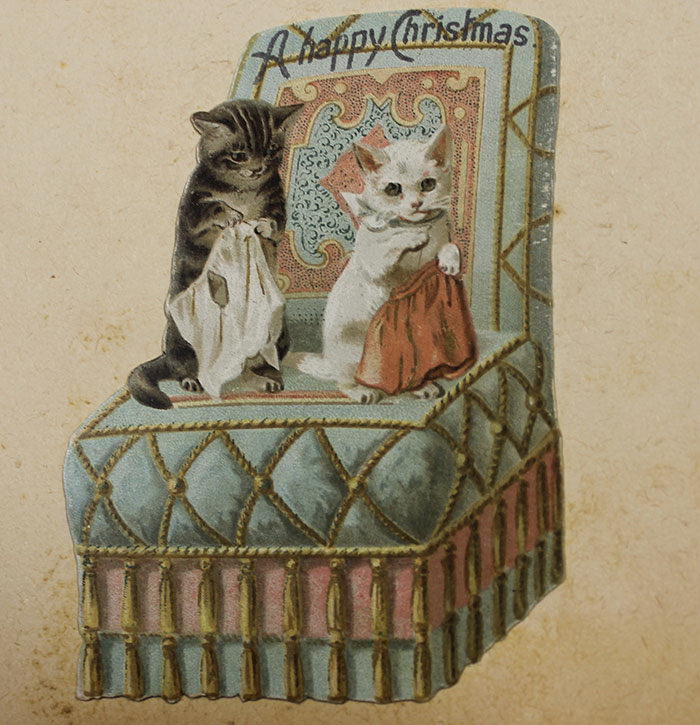 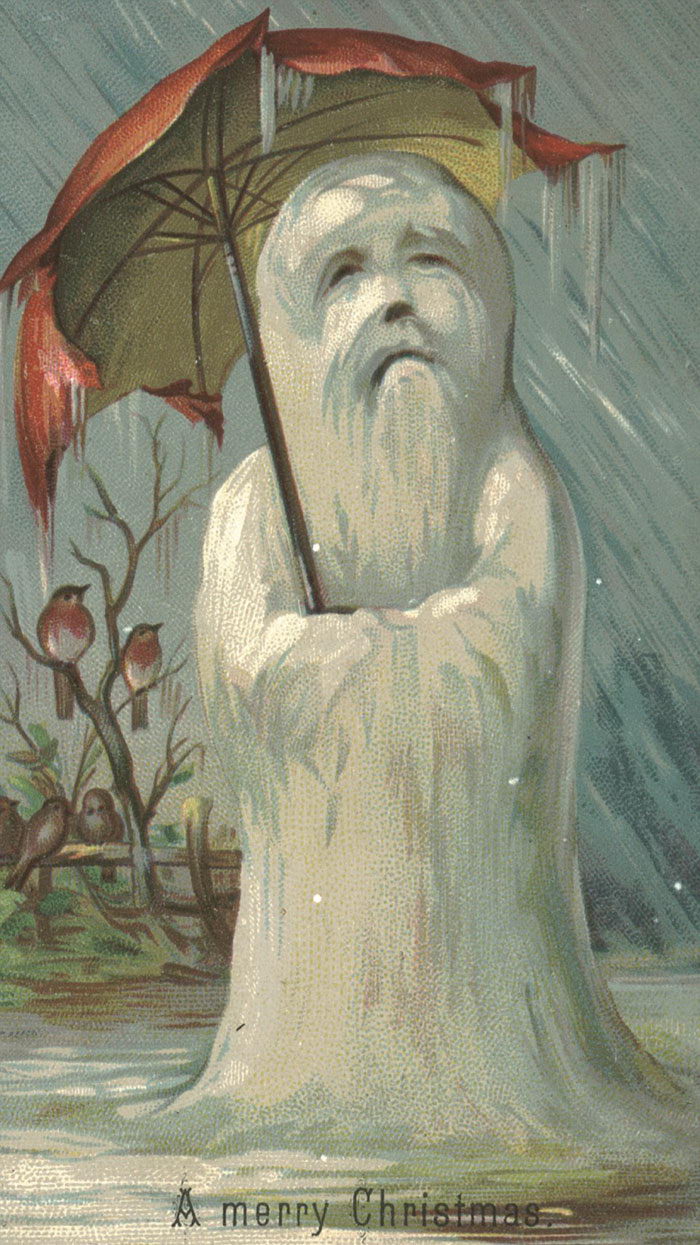 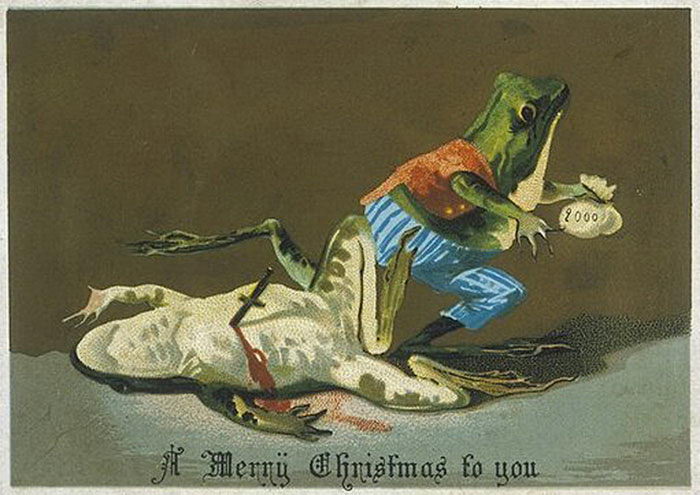 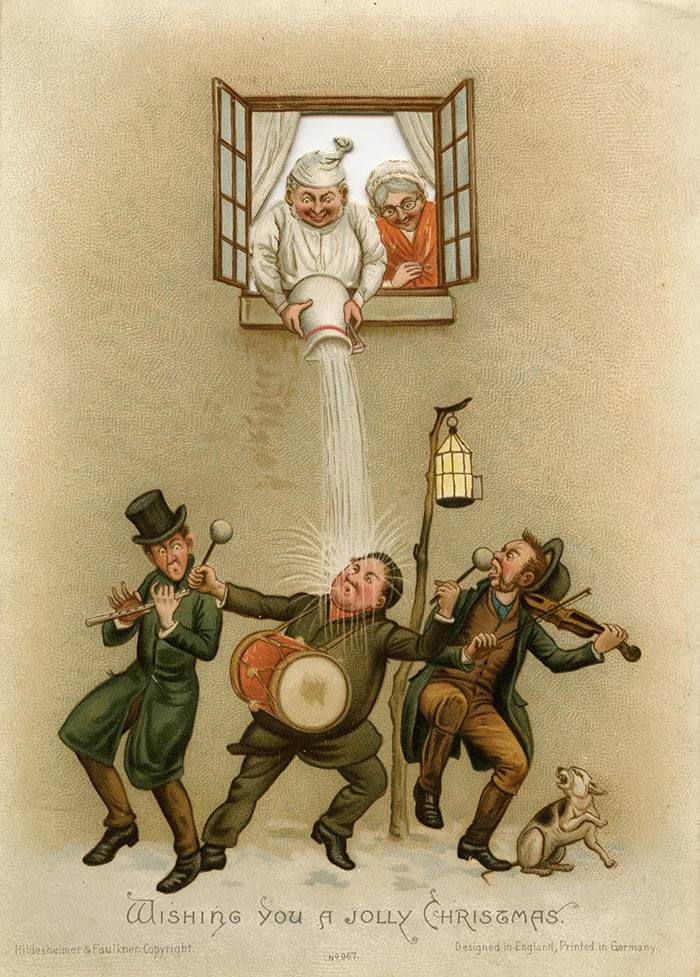 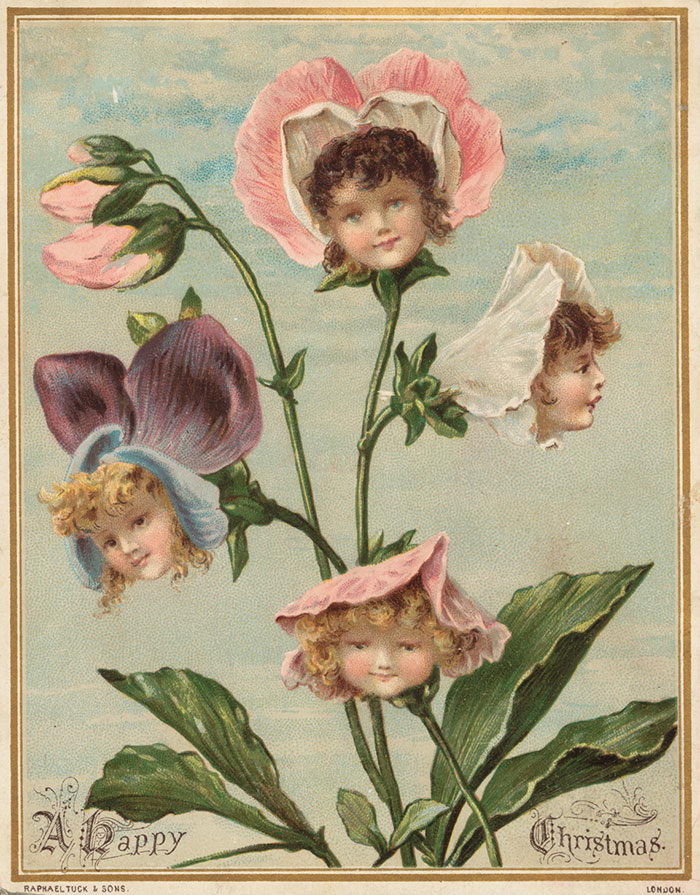 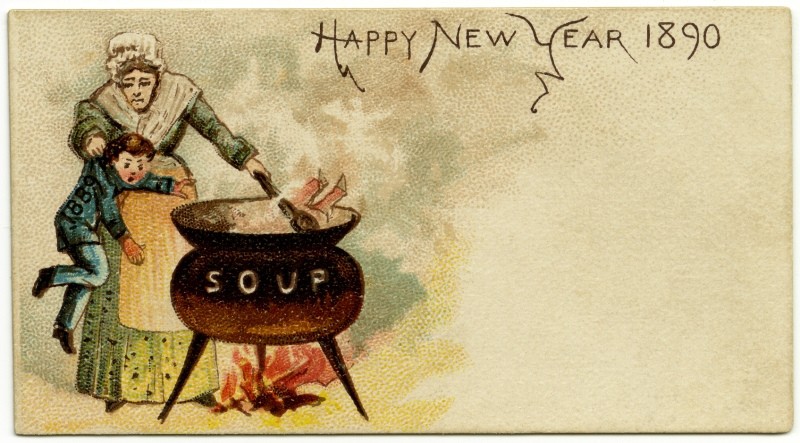 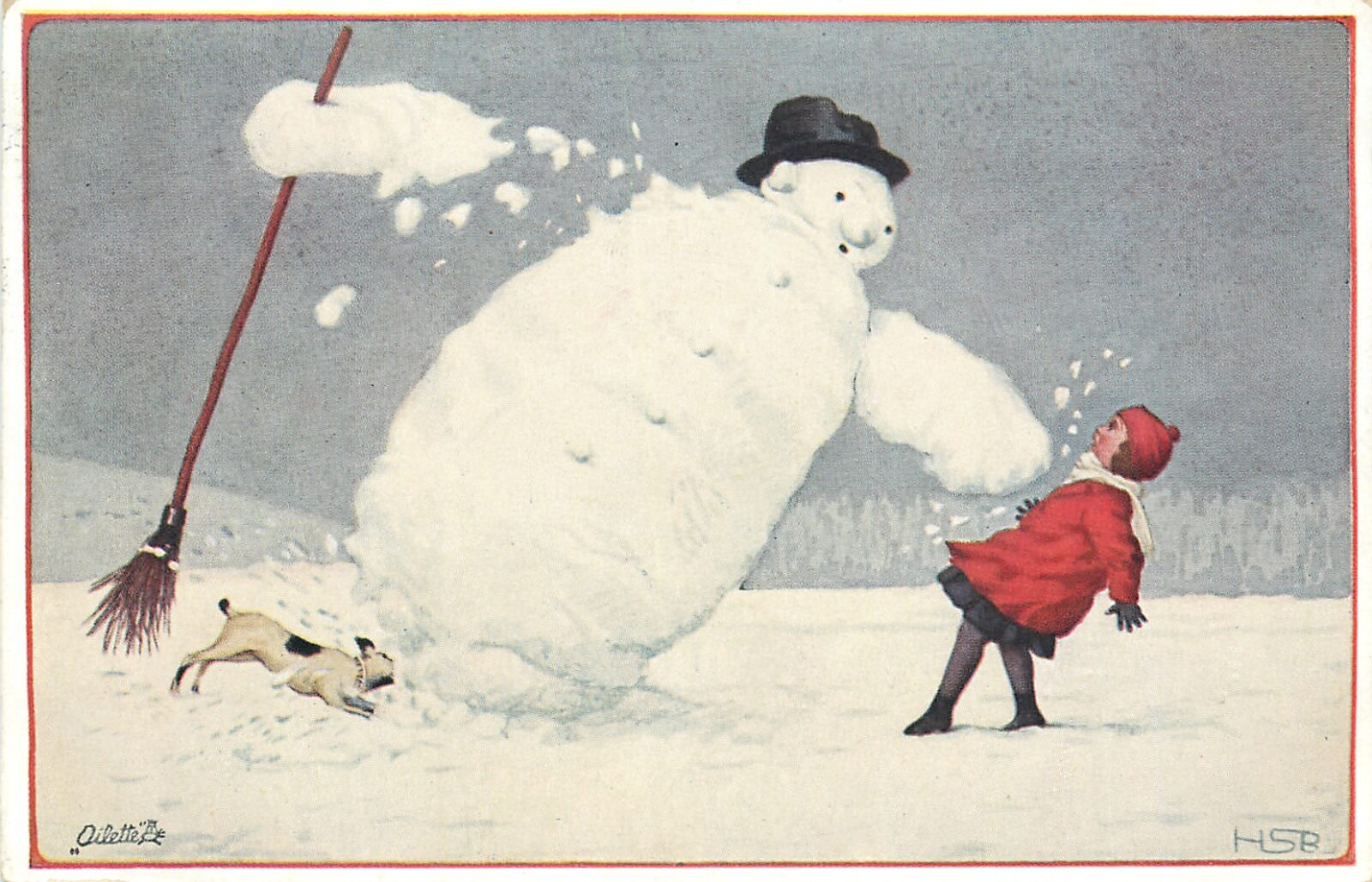 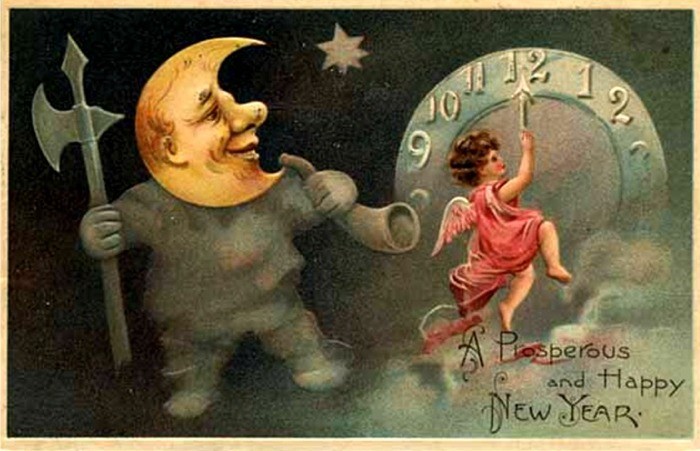 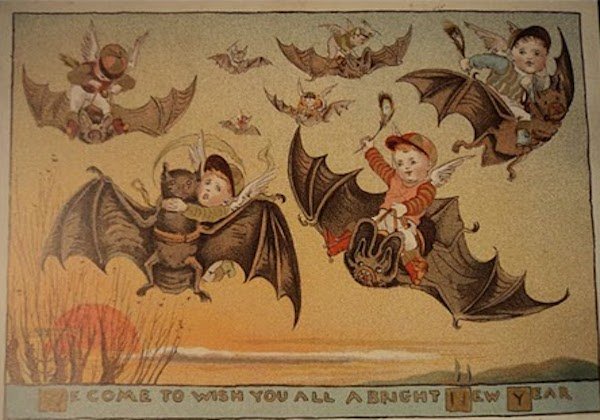 But where did this strange Christmas iconography come from, and what does it mean? English graphic design historians don’t know, painting that deciphering the meaning of most of these cards is now impossible. The only thing that is known for certain is that Christmas was not celebrated widely in England at the beginning of the 19th century, unlike in Europe, and our usual Christmas iconography, with its rouge Santa, deer, sleds, and gifts, began to take shape only at the very end of the 19th century. 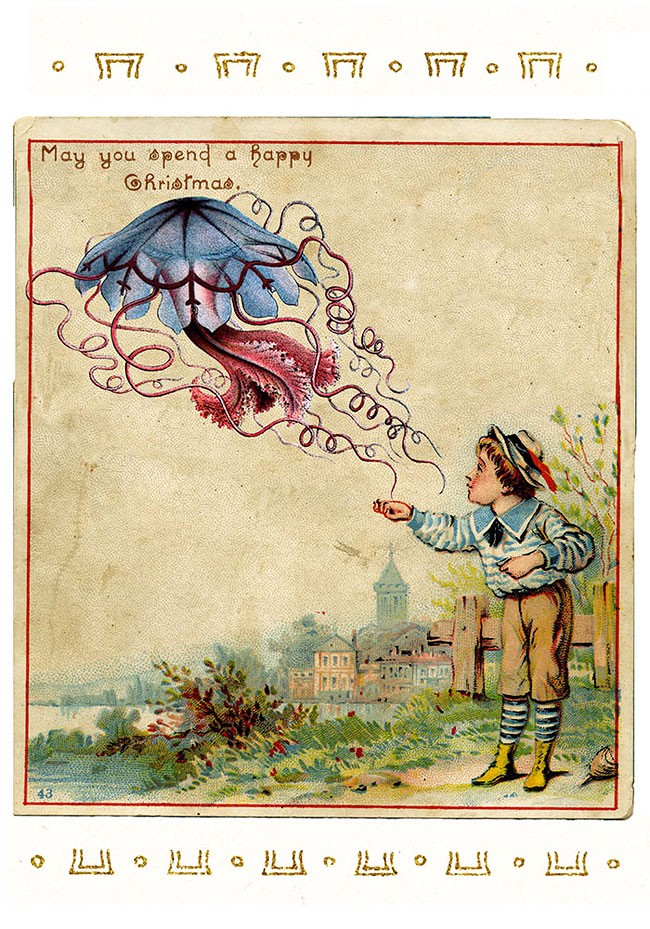 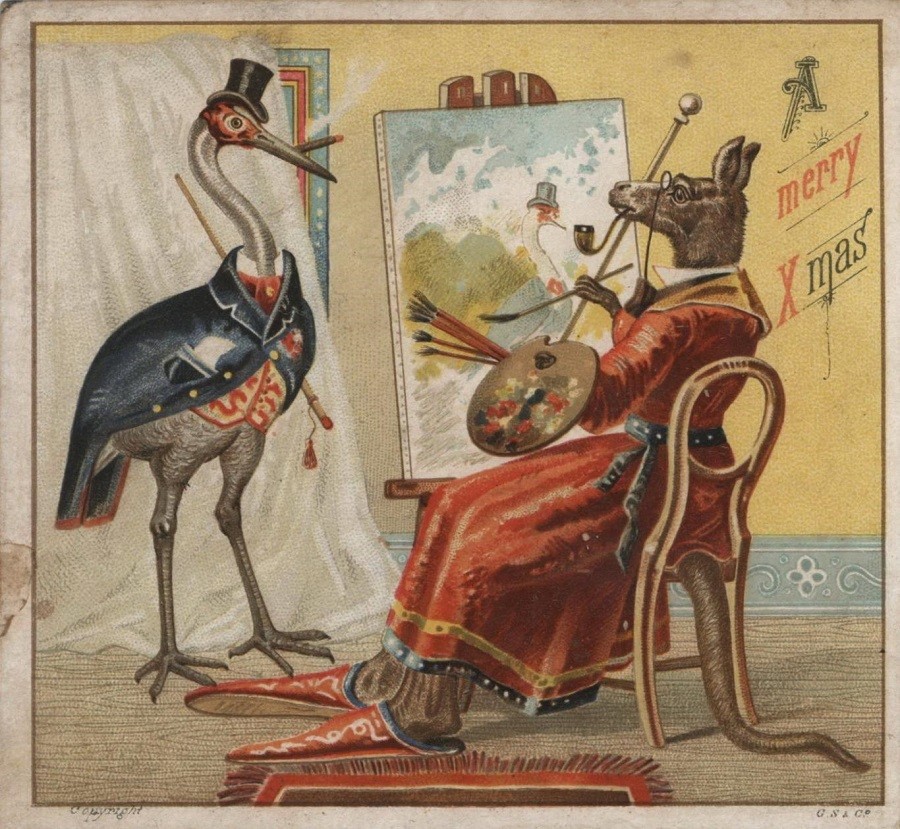 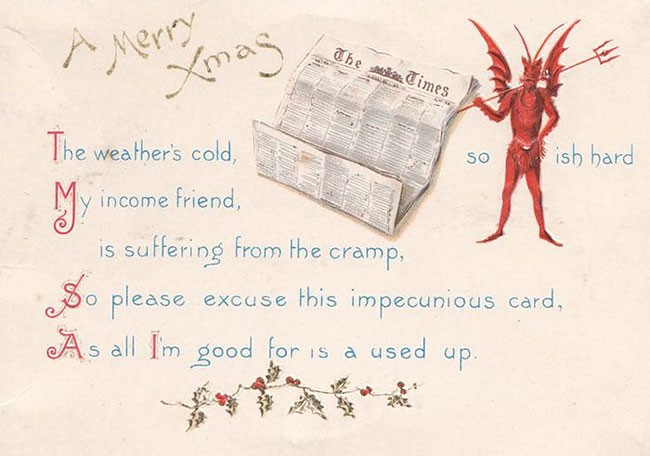