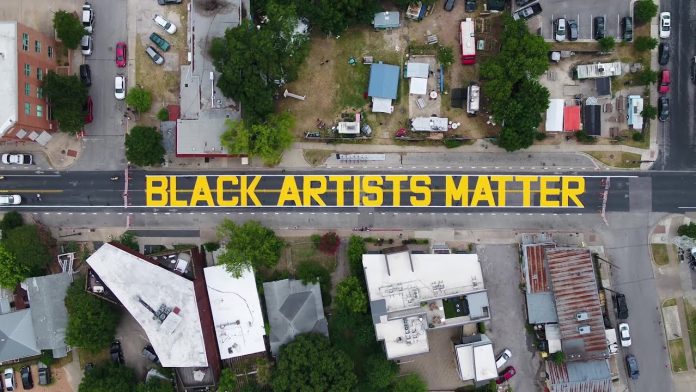 Many artists spoke out in support of the Black Lives Matter movement.

Curators and art dealers have launched an initiative aimed at raising funds to strengthen Black Lives Matter. The artists said they would use the deals to sell the paintings to help organizations, foundations, and movement initiatives.

Recently, the Art for Philadelphia Community Bail Fund was launched: now you can buy unique paintings on their official website for as little as $ 300. The proceeds will go to the Philadelphia Rescue Fund.

Among the fund’s iconic lots is a photo by photographer Mark Maddox. It depicts protesters destroying a monument to the former mayor of Philadelphia – the politician supported racist movements.

Also, an engraving by Sharon Hayes is shown. The picture of a politician and US presidential candidate in the 1972 elections, Shirley Chisholm. Almost all exhibits are listed as sold-out.

In the art sphere, they said clearly: now is not the time to wait – it’s time to act. And the artists began to create – everything is unconditionally signed with the slogan #blacklivesmatter. We are talking about some of the most prominent followers of the American “art resistance”. 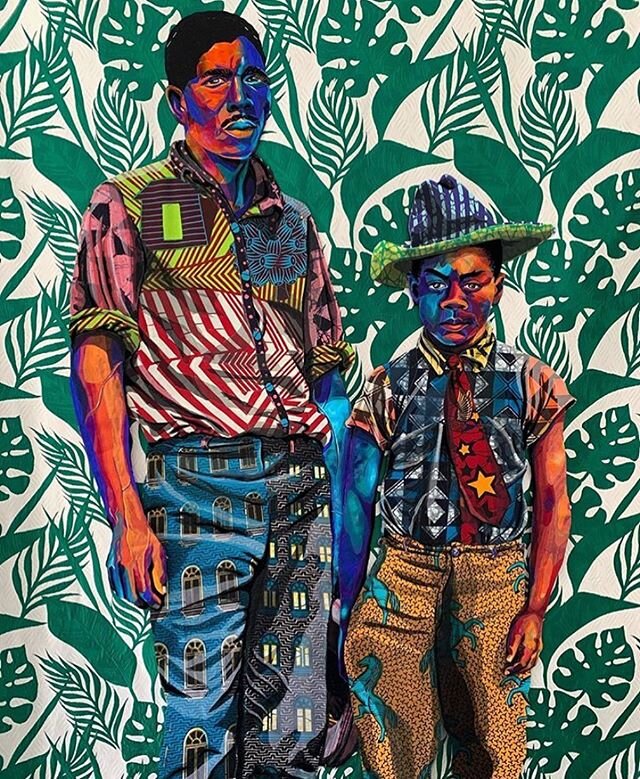 The heroes of her canvases are “average” African Americans – perhaps Butler noticed them, looking at someone’s family portrait on the wall. Perhaps the artist noticed them in the photograph – they were captured by a photographer passing by.

They have no big names or signatures to tell us who they were, but under Butler’s brush, they come to life and tell their long and rich biography in detail. 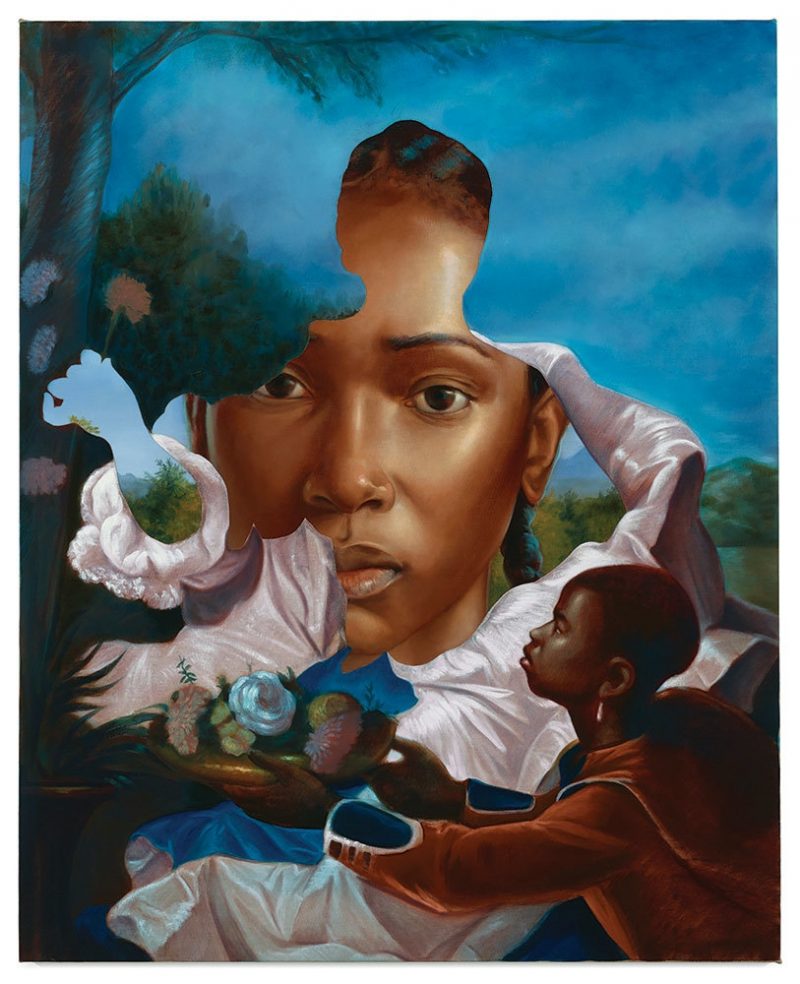 Kaphar is a representative of African American black art whose work restructures art history in its own way. His paintings are presented in the collections of famous museums: MoMA, Brooklyn Museum, New Britain Museum of American Art, and many others.

Now the artist is actively collaborating with Time. In support of Blacklivesmatter, the magazine released a cover with Kaphar. 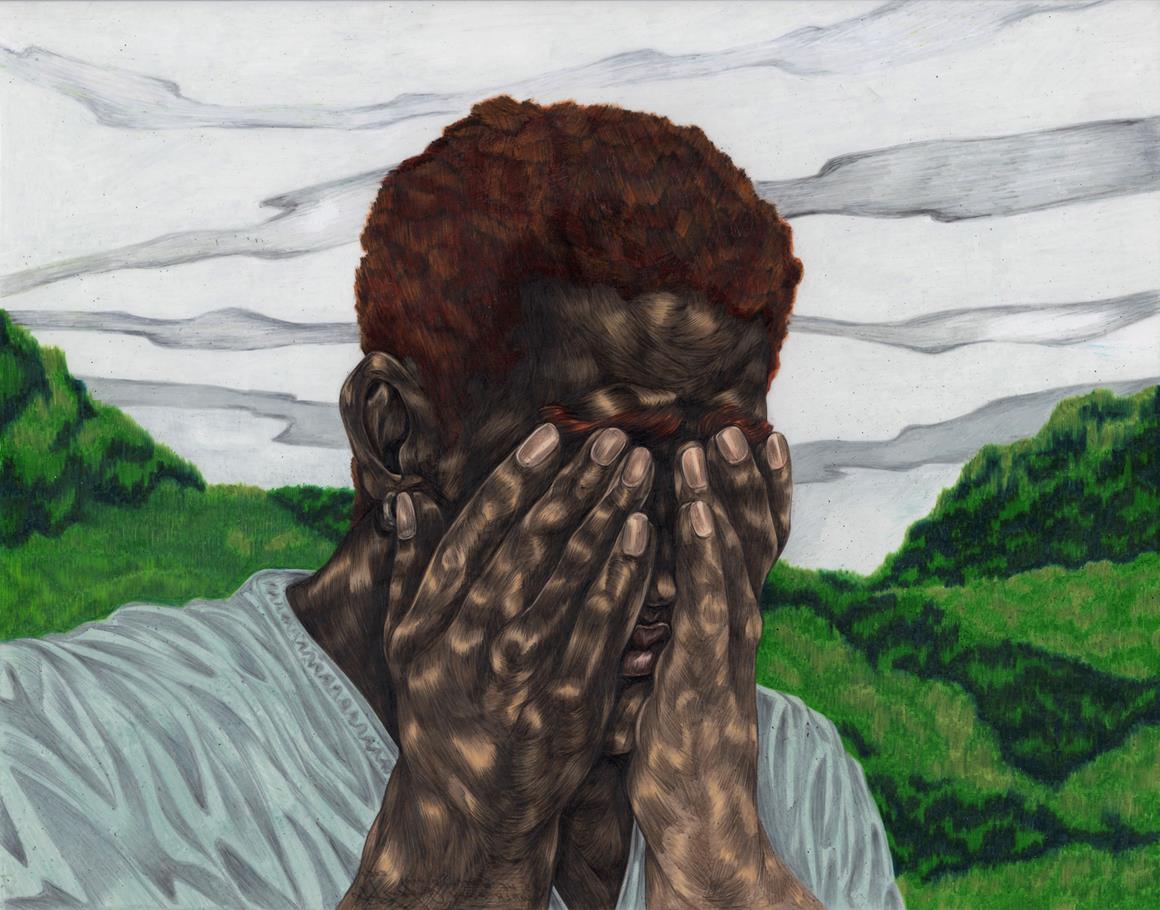 Ojih Odutola, an artist with a complicated surname, lives in New York and is very famous throughout the United States.

Through multimedia installations and sketches on paper, Toyin explores the malleability and flexibility of the individual. In them – the search for more and more new opportunities for visual storytelling.

The inspiration for the artist was the uniqueness of human skin – her portraits are distinguished by a special style of drawing strokes, dots, and strokes, where ballpoint pens and charcoal become the main materials.

This unusual technique is based on the creation of “levels” on the canvas – despite their layering, the canvases are very detailed. Portrait Painting for the artist is the creation of stories that gradually unfold in a series of art objects. Pictures for her are full chapters of one big book.

We also want to introduce our readers to the most prominent representatives of African American black art. 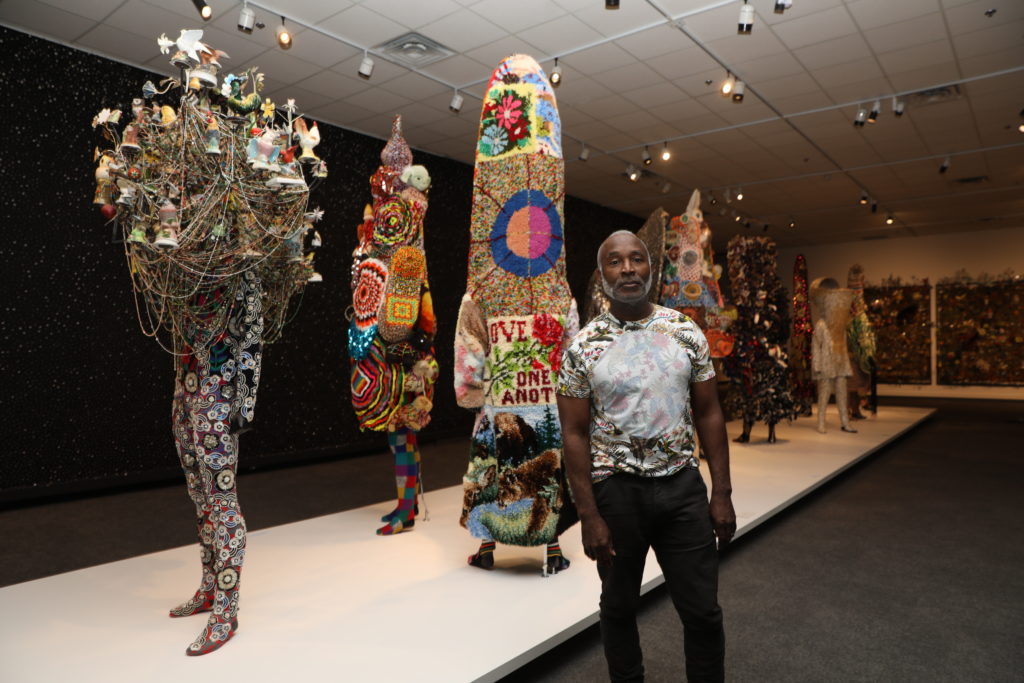 His multifaceted performance, installation, and sculptural practice has crafted formations of black identity and community in the past and present adverse times.

A mash of African tribal ceremonial dress, Ku Klux Klan robes, Roman Catholic clergy robes, Yeti, and Star Wars heroes. All these coveted images from pasture were created by Chicago-based artist Nick Cave, let’s get to know each other! 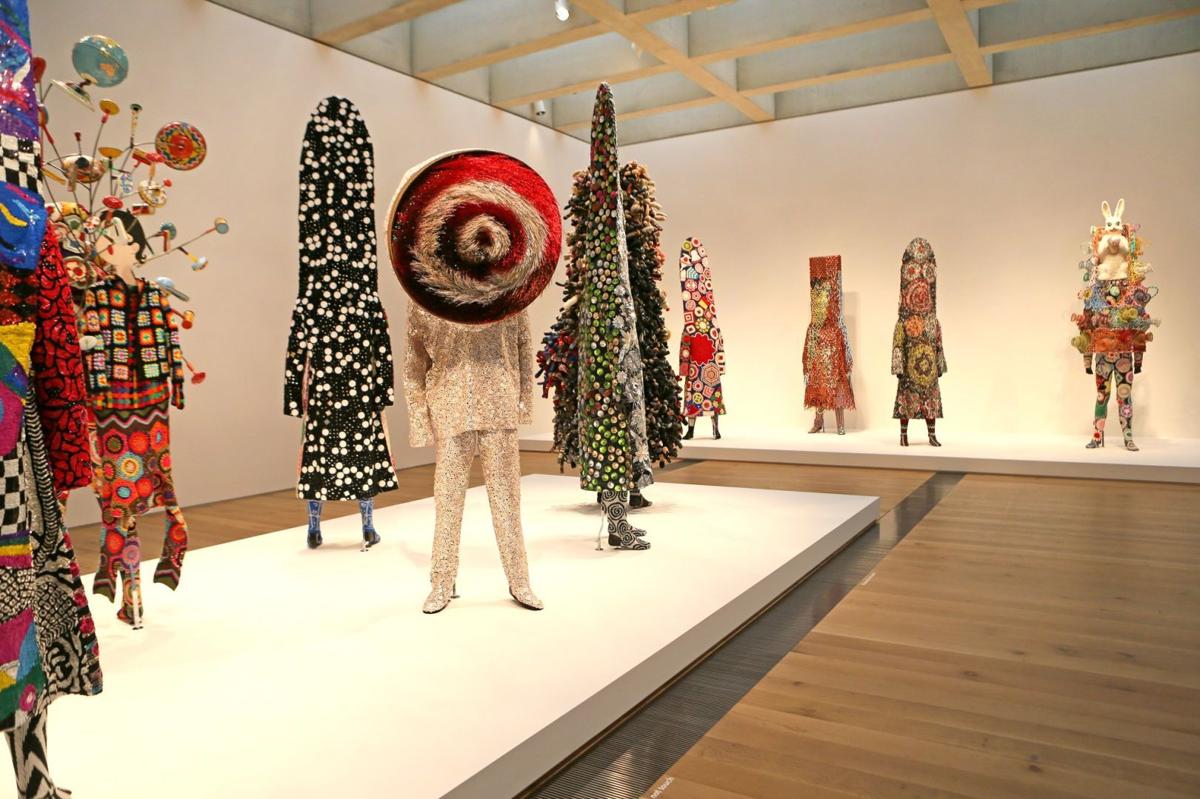 The costumes of the Soundsuits project are charged with associations of opposites: African versus white supremacist, religious versus pagan, male – warrior versus cheerful peacock.

The costumes of this bright representative of black American art are filled with designs that can make you wonder – in the lost sense of fear of the mysterious spirits of the past.

Sounding Costumes got their name from the sounds they make when you put them on. Nick Cave’s quirky apparel installations are crafted from an eclectic array of junk materials and items purchased from thrift stores.

There are old carnival masks, artificial beards, and flowers, clothes, fabrics, socks, birdcages, a fine wire mesh from which a complex but visually attractive structure is constructed. 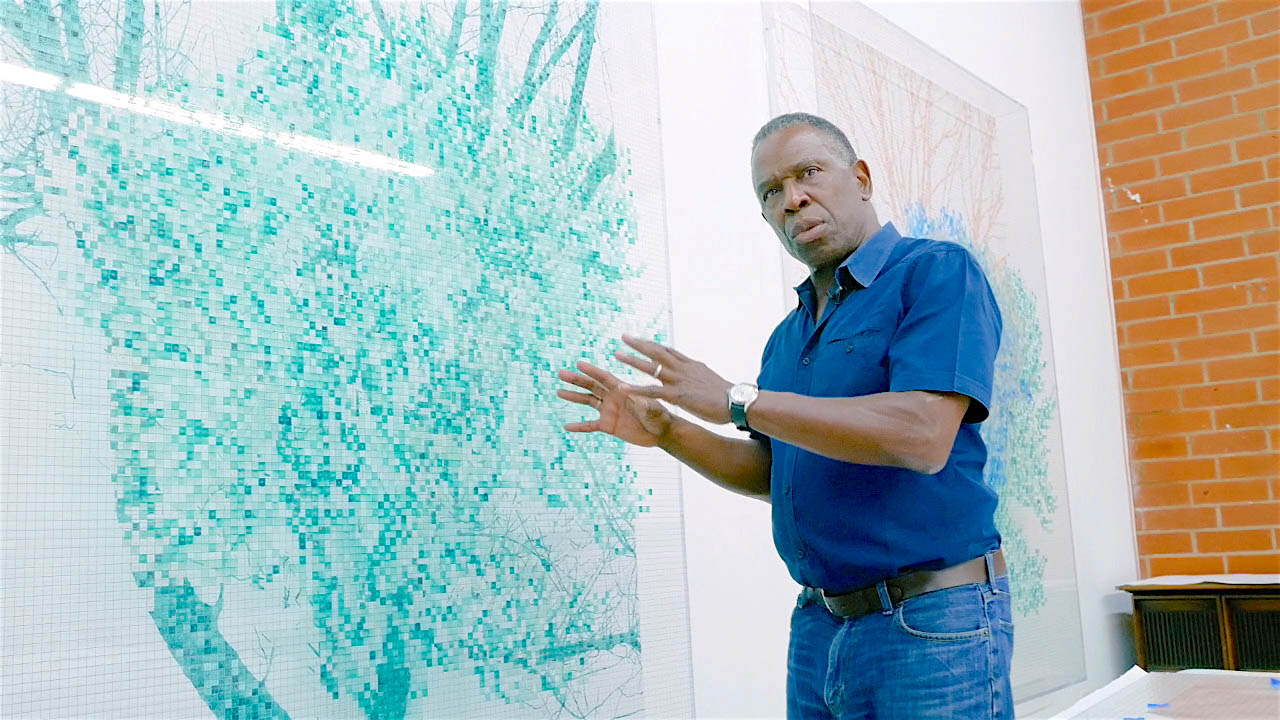 His works explore the discourse of aesthetics, politics, and philosophy. Taking the form of drawings, photographic series, and video installations, the work consistently involves the use of systems, predominantly in the form of a grid, often in combination with photography.

His work is rooted in concept art. As one of the few African American conceptualist artists working in the 1970s, when political expressionism was the predominant issue among African American artists, Gaines was special in his pursuit of abstraction and a non-didactic approach to race and politics. 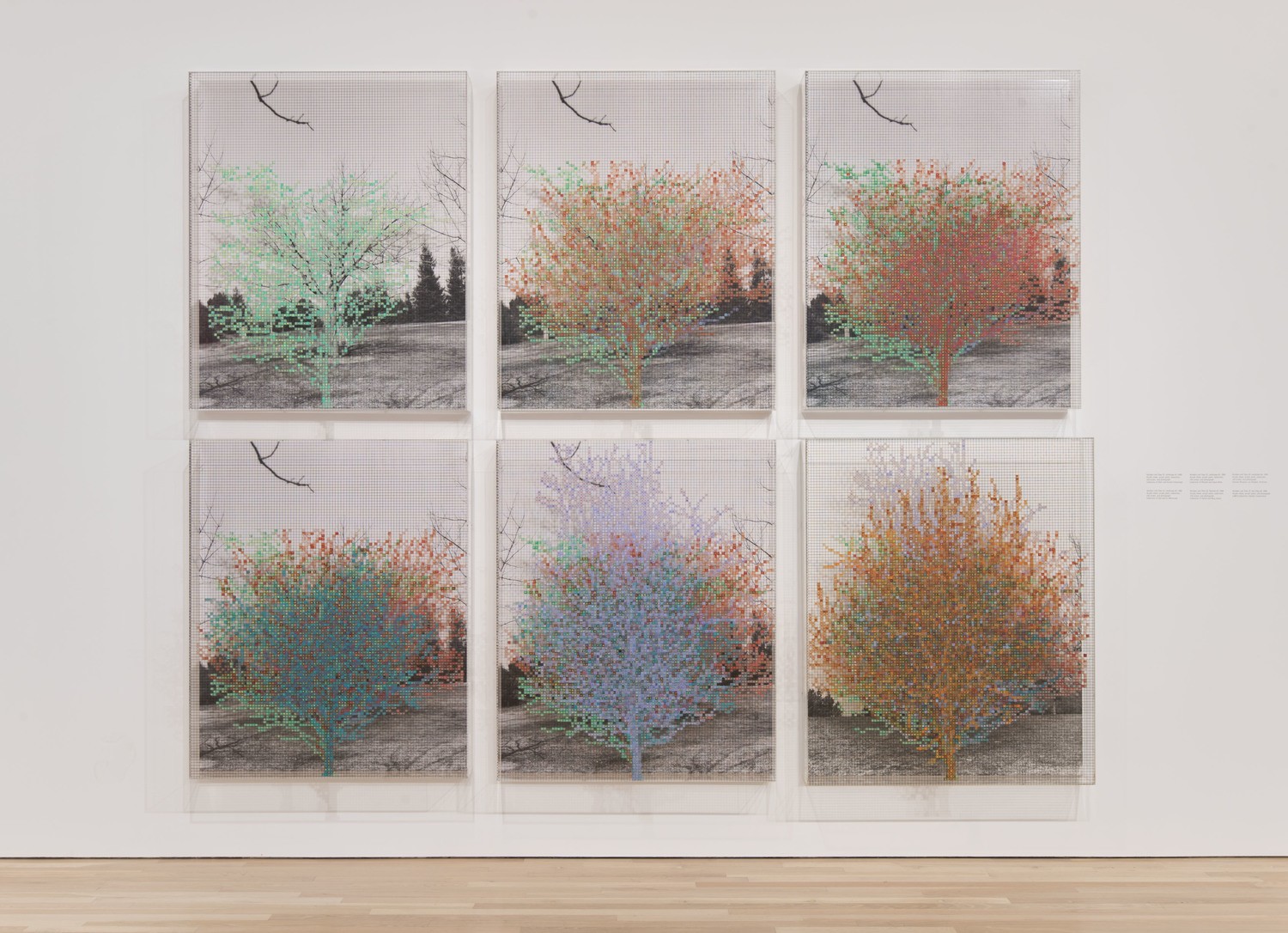 A strong musical thread is running through much of Gaines’s work. It is evident in his repeated use of musical scores, as well as his involvement in the idea of ​​uncertainty. 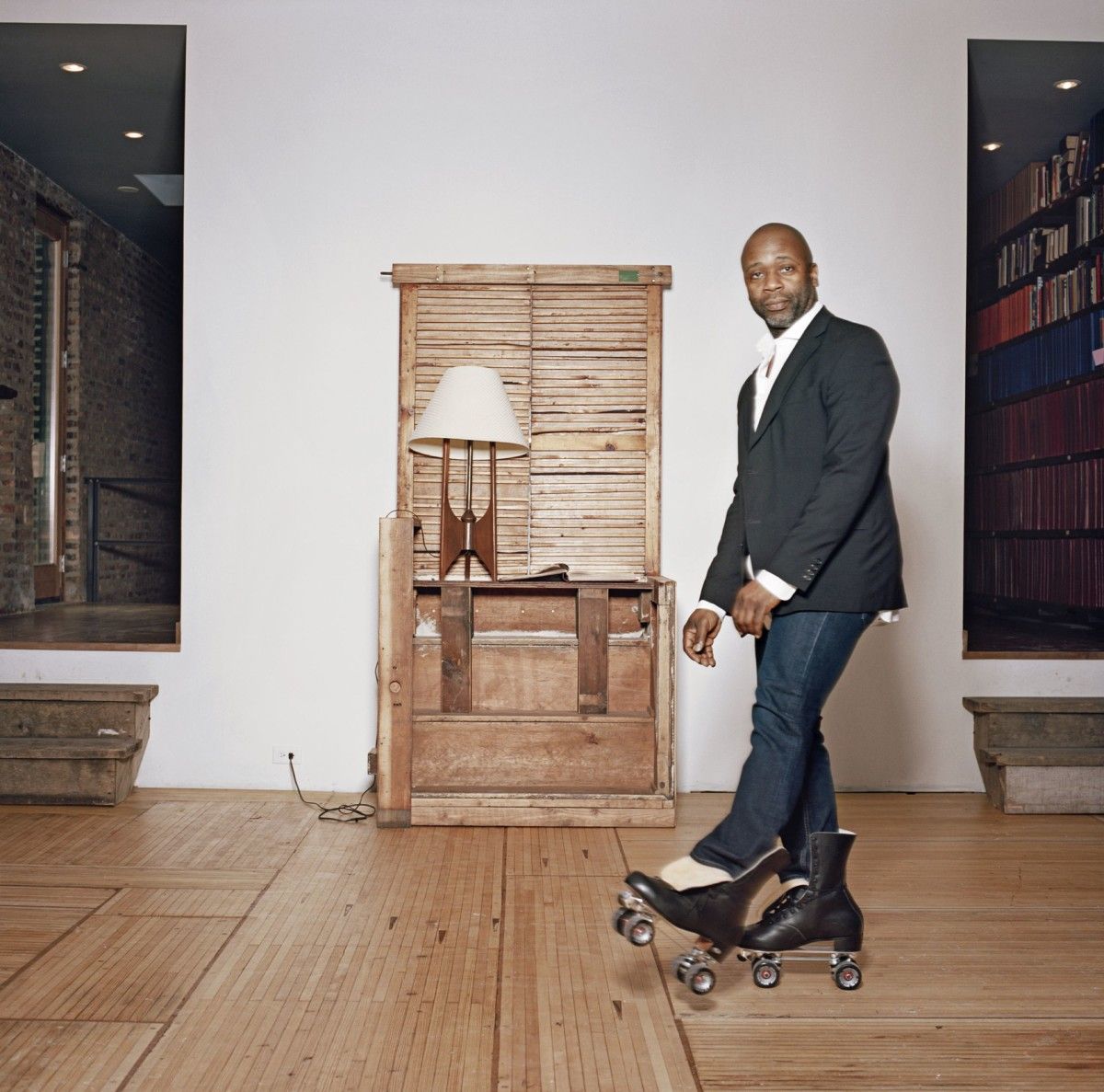 Meet the artist who revives cities and explores the history of African American art. Theaster Gates is a social installation artist living and working in Chicago, USA.

Theaster Gates is a social installation artist living and working in Chicago, USA.

He started his career studying Urban Planning and earned a Master’s Degree in Religion, Ceramics, and Urban Design.

Thanks in part to this influence, he now brings activism, project management, and urban planning to his work. Before installing, Gates made pots, and here he explains how it got him to where he is now.

Pottery and ceramics continue to play a large role in Gates’s work. 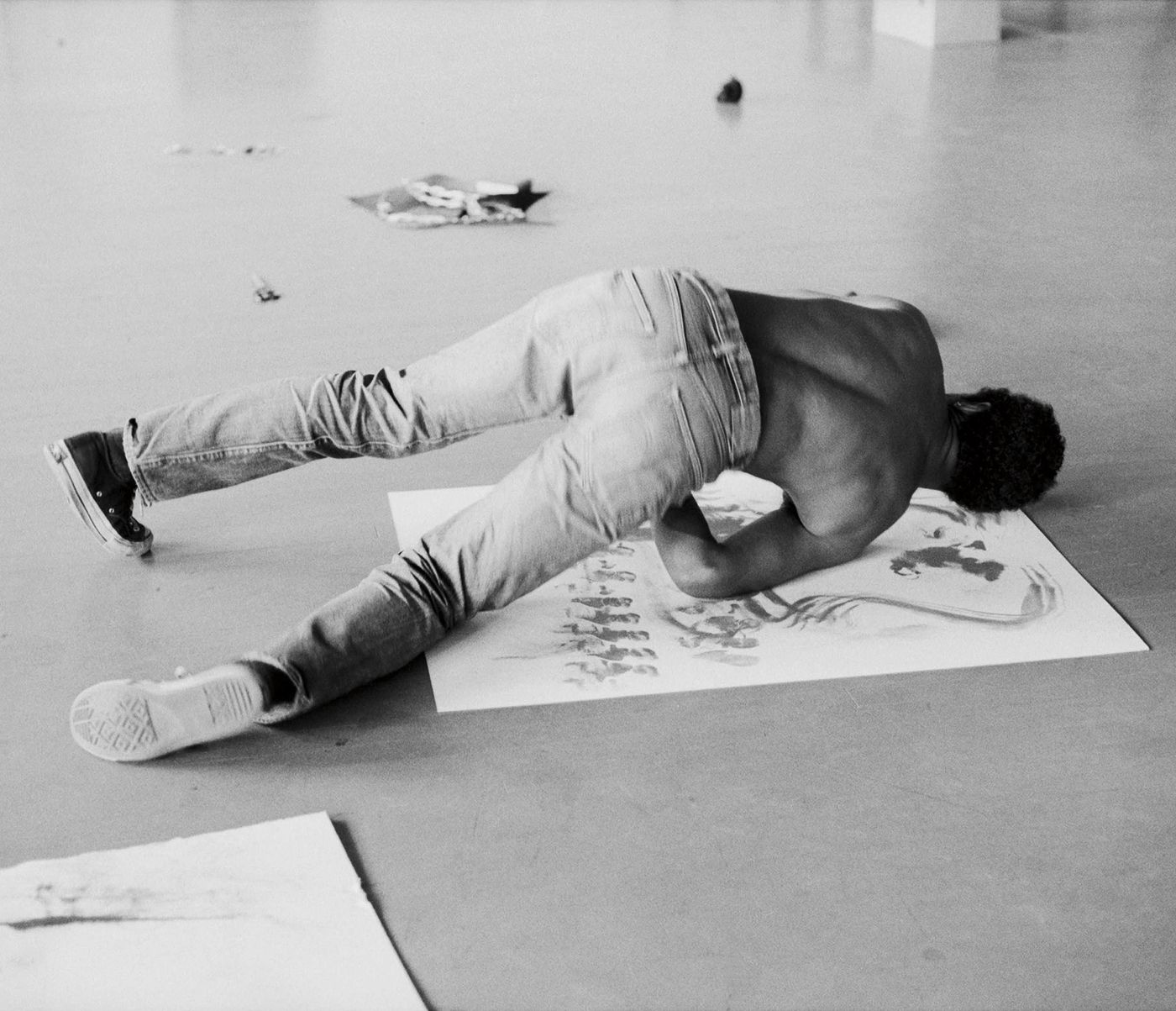 He became a famed artist for his body prints. The artist began this artistic practice in the 1960s. This unique art was created by smearing Hammons’ own body. Then he pressed down on the paper and added graphite or other material to emphasize the main print.

Hammons’ work consists of not only allusions but also metaphors. These metaphors are transformed into symbols that are important both in the art world and in the eyes of the public. David Hammons continues to offer a crucial interpretation of the history of African American black art in the life of a person of color through these symbols. 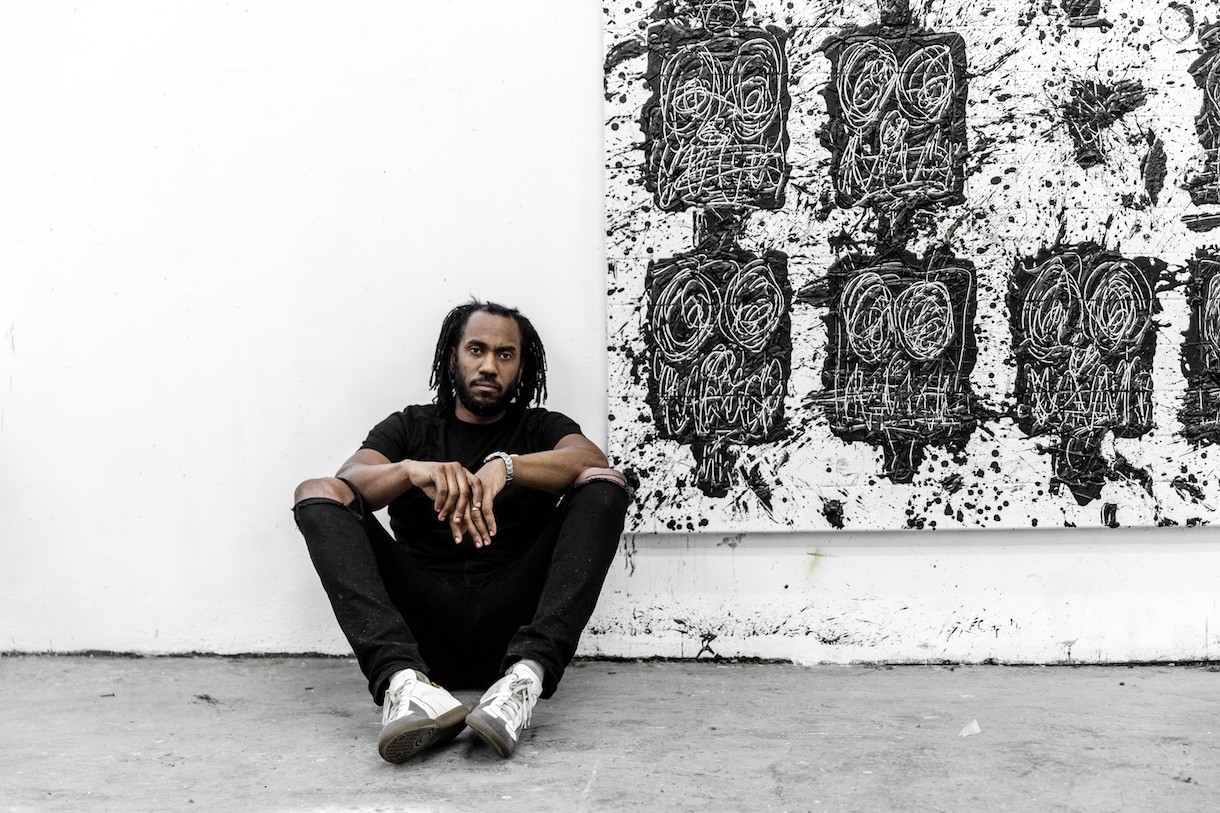 Rashid Johnson (1977), American concept artist, one of the most prominent authors of African American black art.

Works in the genre of Post-Black Art, showing, through a synthesis of historical, cultural, and material intersections, the continuity of African American history and world art history. The main directions in which the artist works are painting, sculpture, and photography.

When creating objects, he uses a large number of materials from everyday life, from wood and ceramic tiles to living plants and radio-technical parts. The most recognizable combination of materials with which Rashid Johnson is associated is the mixture of wax and black soap, which he applies to canvas to create voluminous compositions. 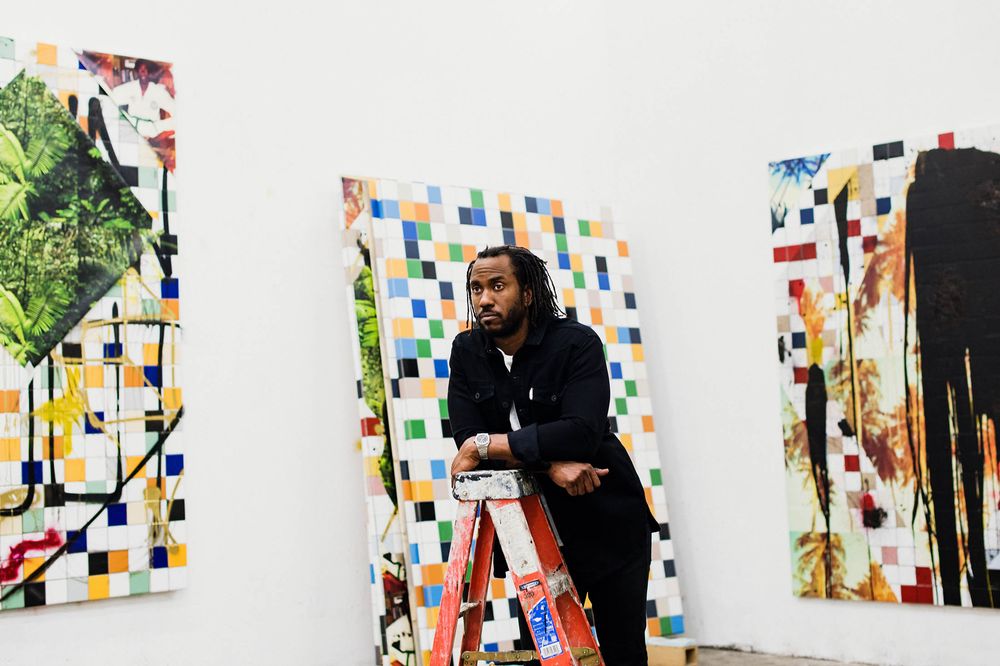 To date, the artist has held 44 solo exhibitions and participated in 185 group exhibitions (4 of which were scheduled for 2020, but so far postponed), 9 international biennials, and at least 22 art fairs.

Rashid Johnson’s works are presented on a non-exclusive basis by 18 galleries and private dealers, among which the main one is the international network Hauser & Wirth (they have been cooperating since 2011).

The artist’s works are in prestigious museum collections, such as Modern Art MoMA, the Solomon Guggenheim Museum, the Whitney Museum of American Art (both in New York), and the Art Institute of Chicago. 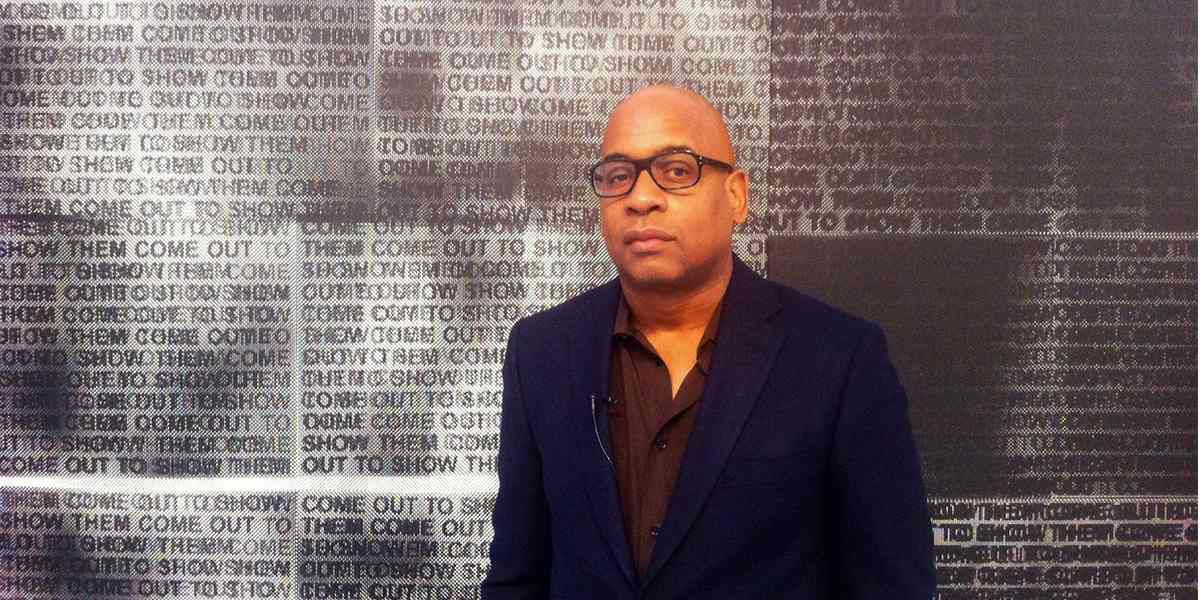 Ligon’s works include sculptures, prints, drawings, mixed media and neon signs, and painting. He incorporates texts into his paintings in the form of literary snippets, jokes, and memorable quotes from selected authors, which he manually stenciled directly onto canvas.

In 1989, he organized his first solo exhibition “How It Is To Be Painted” in Brooklyn. This show established Ligon’s reputation as the creator of large text paintings in which a phrase chosen from literature or other sources is constantly repeated, eventually fading into darkness. 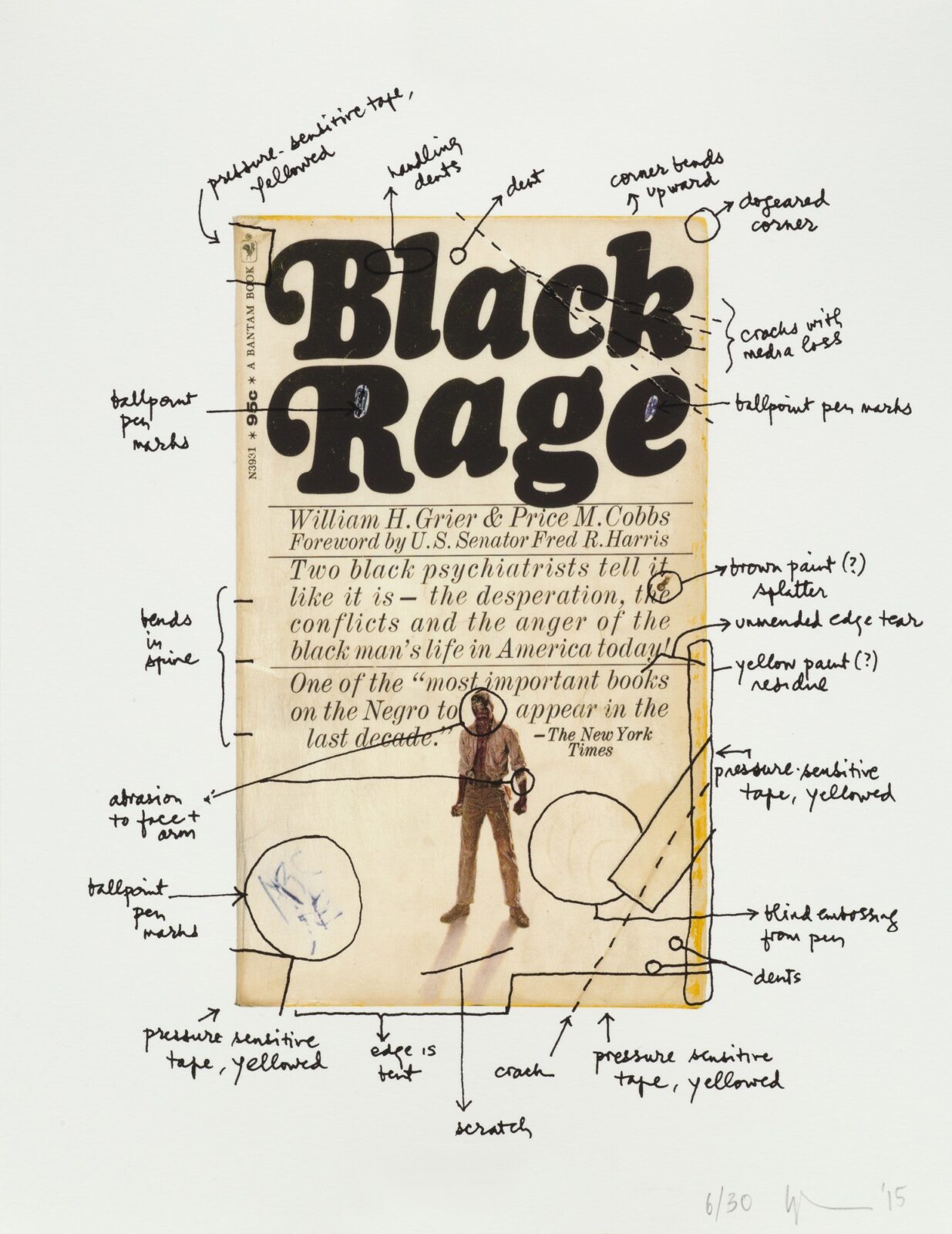 Ligon rose to prominence in the early 1990s. In 1993, Ligon’s show To Disembark came out. This series explores the connection between the slavery of the past and the racial injustice of the time. 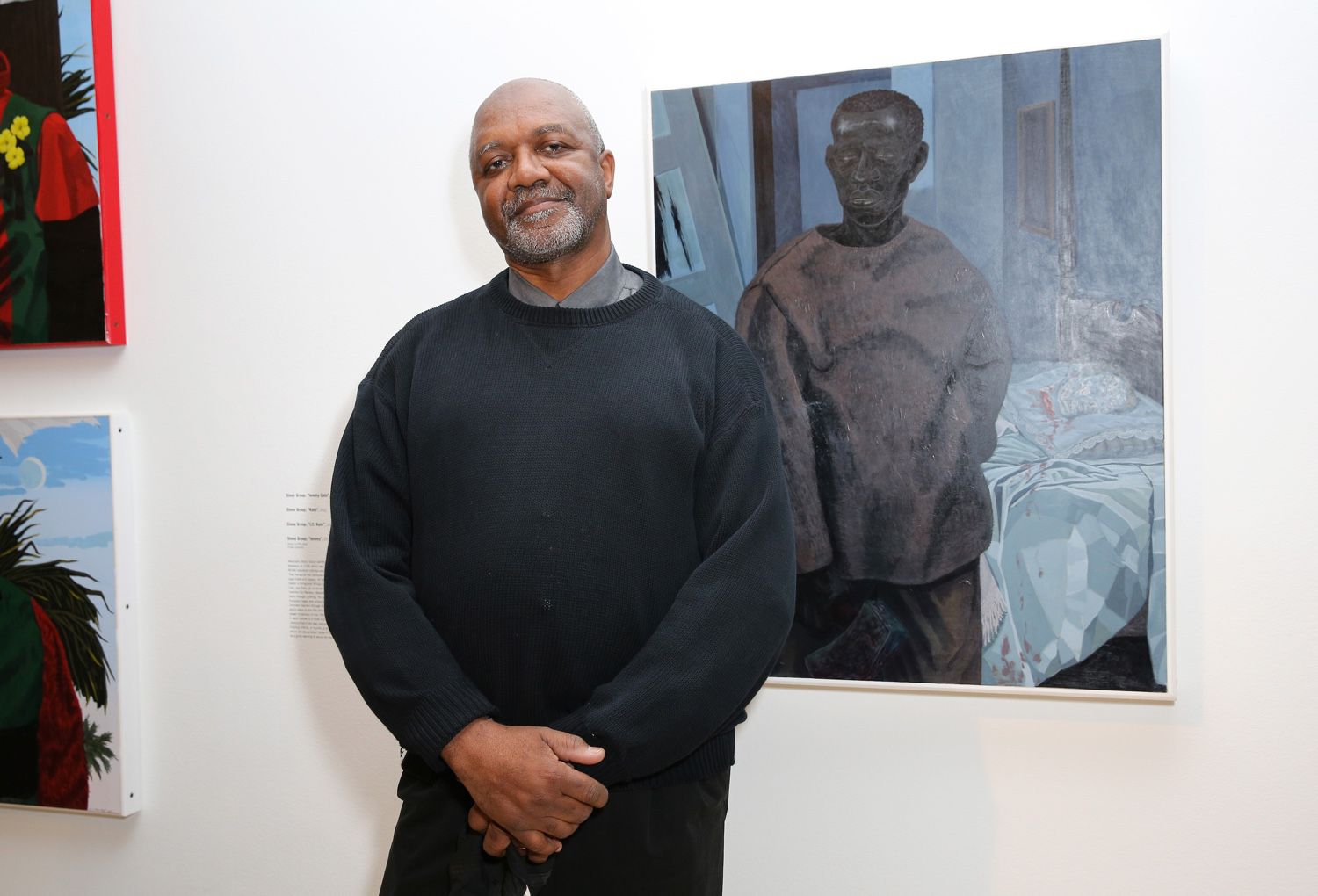 He is called one of the main representatives of African black art of our time. In his canvases, Marshall explores the everyday life of black communities in the United States. The aim of his art is to normalize African American culture, which has long been rejected in predominantly white circles.

With the Black Lives Matter movement, his work takes on new meaning. He rose to the top echelon of the art world while remaining steadfastly dedicated to presenting work that explores America’s black experiences.

He witnessed the Watts riot in August 1965. As a teenager, Kerry James Marshall took part in the summer drawing class at the Otis Art Institute in Los Angeles.

Many of Kerry James Marshall’s works reference events from American history. One of the most famous is the 1992 Voyager. 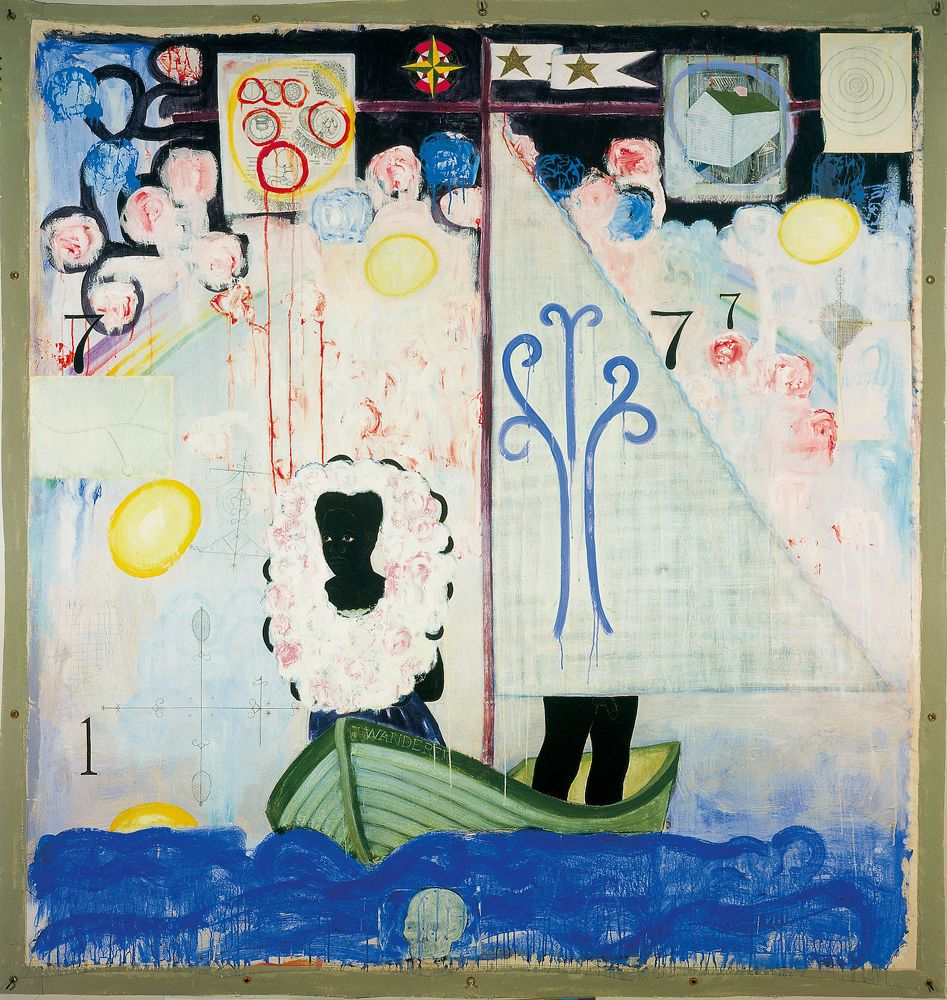 In 1994, Kerry James Marshall wrote an episode titled “The Garden Project.” It is a metaphor for African-American life in America today.

A frequent theme in Kerry James Marshall’s work is the concept of beauty. People depicted in Marshall’s paintings tend to have very dark, almost flat black, skin. He created the extreme specifically to draw attention to the characteristic appearance of black Americans. 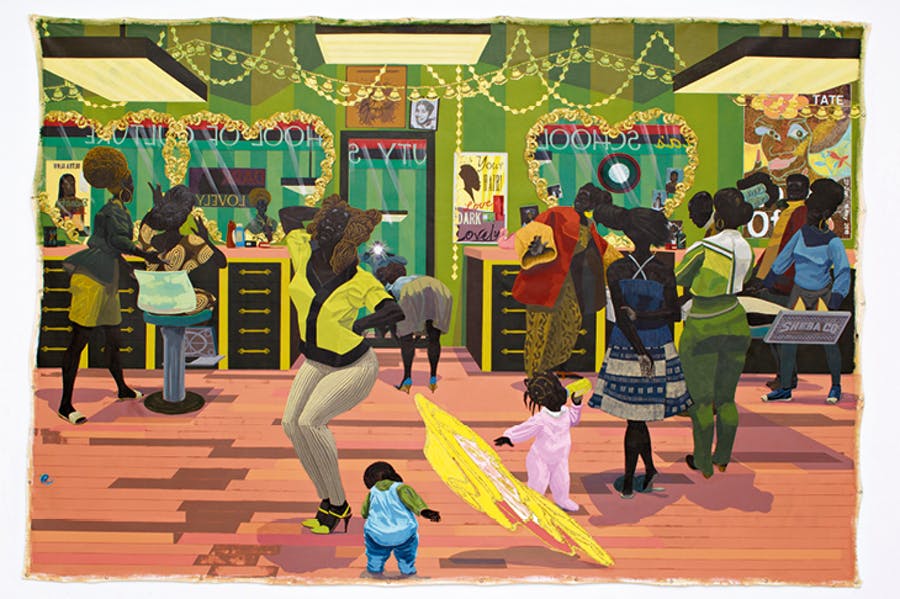 In 2016, the work of Kerry James Marshall was the subject of a historically significant Mastry retrospective at the Museum of Modern Art in Chicago.The exhibition covers 35 years of Marshall’s work with nearly 80 pieces displayed. It was an unprecedented celebration of the work of an African American artist. 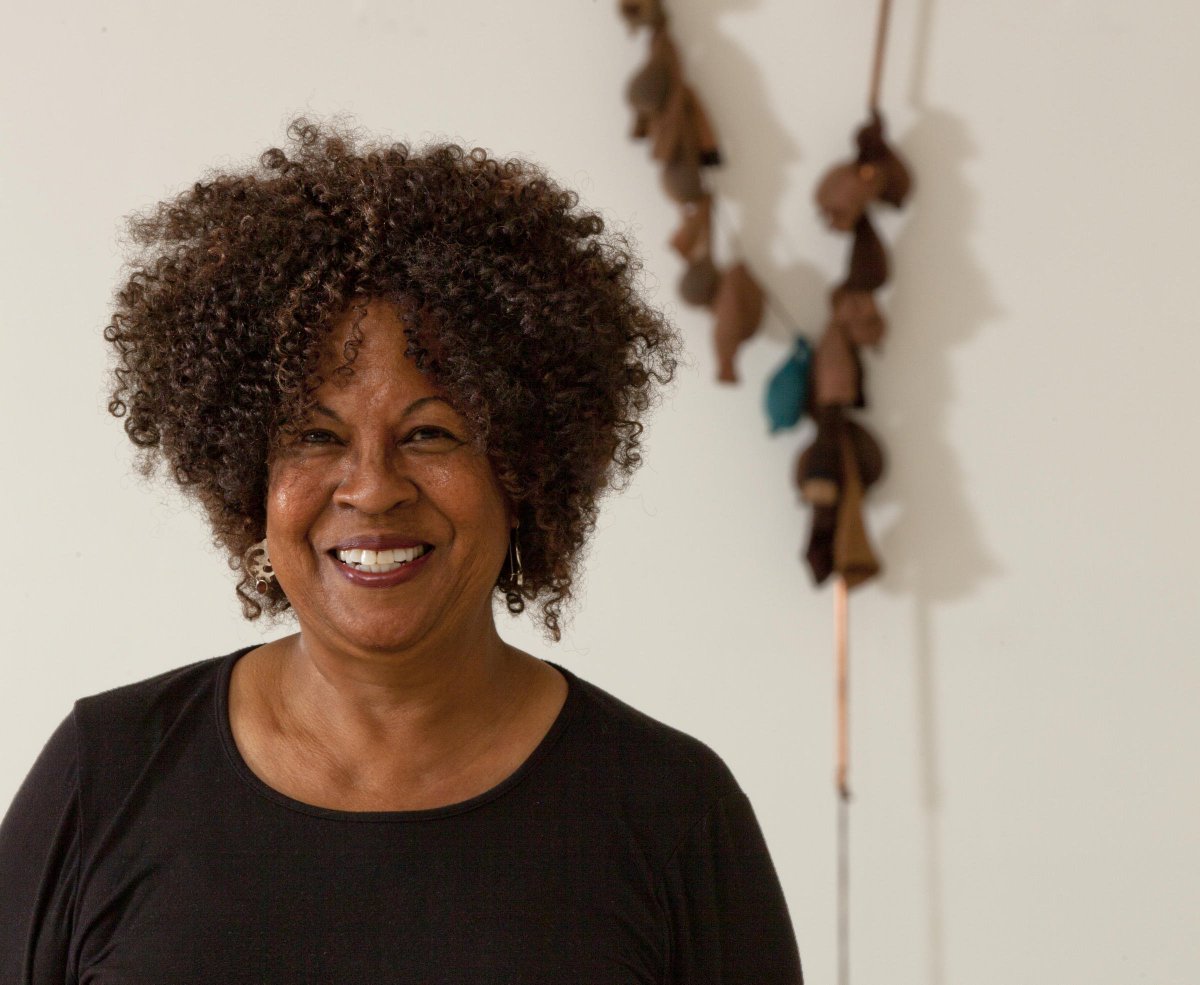 Senga Nengudi is an African American artist. She is known for her abstract sculptures combining found objects and choreography.  Nengudi was part of the radical avant-garde black art scenes in both New York and Los Angeles in the 1960s and 1970s.

She was a member of Studio Z, also known as the LA Rebellion, which consisted of African American artists who excelled in their experimental and improvisational practice. She has worked with two galleries: Pearl C. Woods Gallery in Los Angeles (owned and directed by Greg Pitts) and Just Above Midtown in New York.

Combining her interest in movement and sculpture, she creates abstract sculptures of everyday objects with choreographic sets that were either performed in front of a live audience or filmed.

The sculptures were made from everyday items such as tights, and the pieces were stretched, twisted, knotted, and filled with sand.

The finished sculptures, originally intended to be touched by the public, were often hung on the gallery walls, but stretched across the gallery space, evoking the shapes of bodily organs, sagging breasts, and the mother’s womb. For her, the use of tights as a material reflected the elasticity of the human body, especially the female.

Despite her growing involvement with the African American artist community in Los Angeles, when the RSVP series debuted, there was little public interest in her work.

One of Nengudi’s close friends, David Hammons, has constantly collaborated with Nengudi on a variety of artworks. He explained the lack of public interest in Nengudi’s work, attributing it to the abstract aesthetics that were present in many of Nengudi’s works throughout the 1960s and 1970s.

Moreover, Nengudi’s “RSVP” sculptures were very different from most of the art that had become popular with her fellow artists in Los Angeles as well as New York.

Nengudi learned about the public perception of her art in relation to works of art created by her peers, a concept entrenched in New York, where some people believed that she was not engaged in African black art.