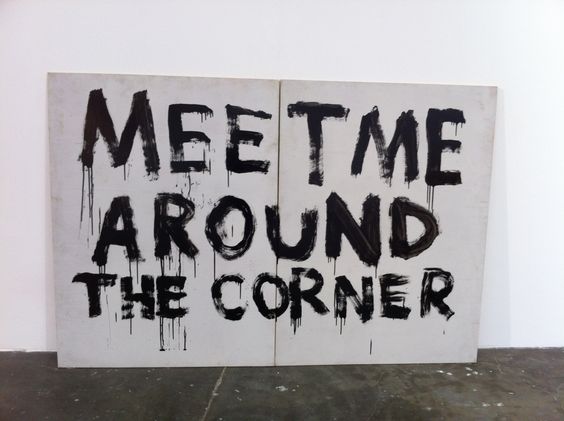 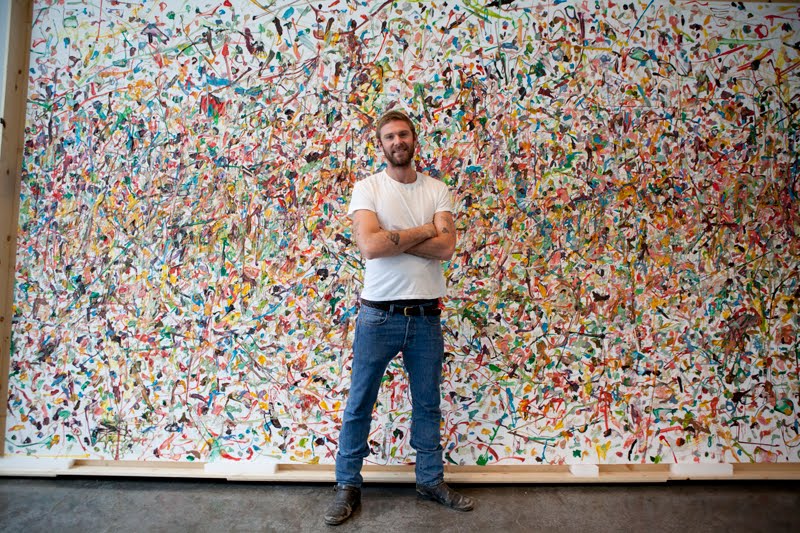 “The most boring story in the art world – why everyone hates Dan Colen so much” – this is how one of the critical reviews begins, dedicated to the work of this young New York artist. After opening a large solo exhibition of Kolene at the Gagosian Gallery in 2010, Dan, a friend and colleague of the tragically deceased artist Dash Snow, fell a barrage of discontent and condemnation: many representatives of the art community consider a successful graduate of the Rhode Island School of Art and Design a formalist and opportunist. All criticism of Colen is only in hand – the artist is now one of the most productive and selling figures in the New York art scene.

Dan Colen draws images from the media and subculture. In “Untitled” (Vete Al Diablo), a boulder with graffiti looks like a real stone from a suburban wasteland that has become an object of vandalism, although the object is actually made of papier-mache. Powerful as a monument, it instantly refers to adolescent rituals, exuding the aura of a degenerate totem. Referring to Eda Rush as a source of influence, Knee often uses text in his work. Kolene’s text paintings, such as “Rama Lama Ding Dong”, are quickly sprayed words on a sheet of plywood. Citing song lyrics, random thoughts, absurd slogans, the artist creates a peculiar form of urban poetry. The works preserve the tension between the immediacy of expression and the perfection of the surface. 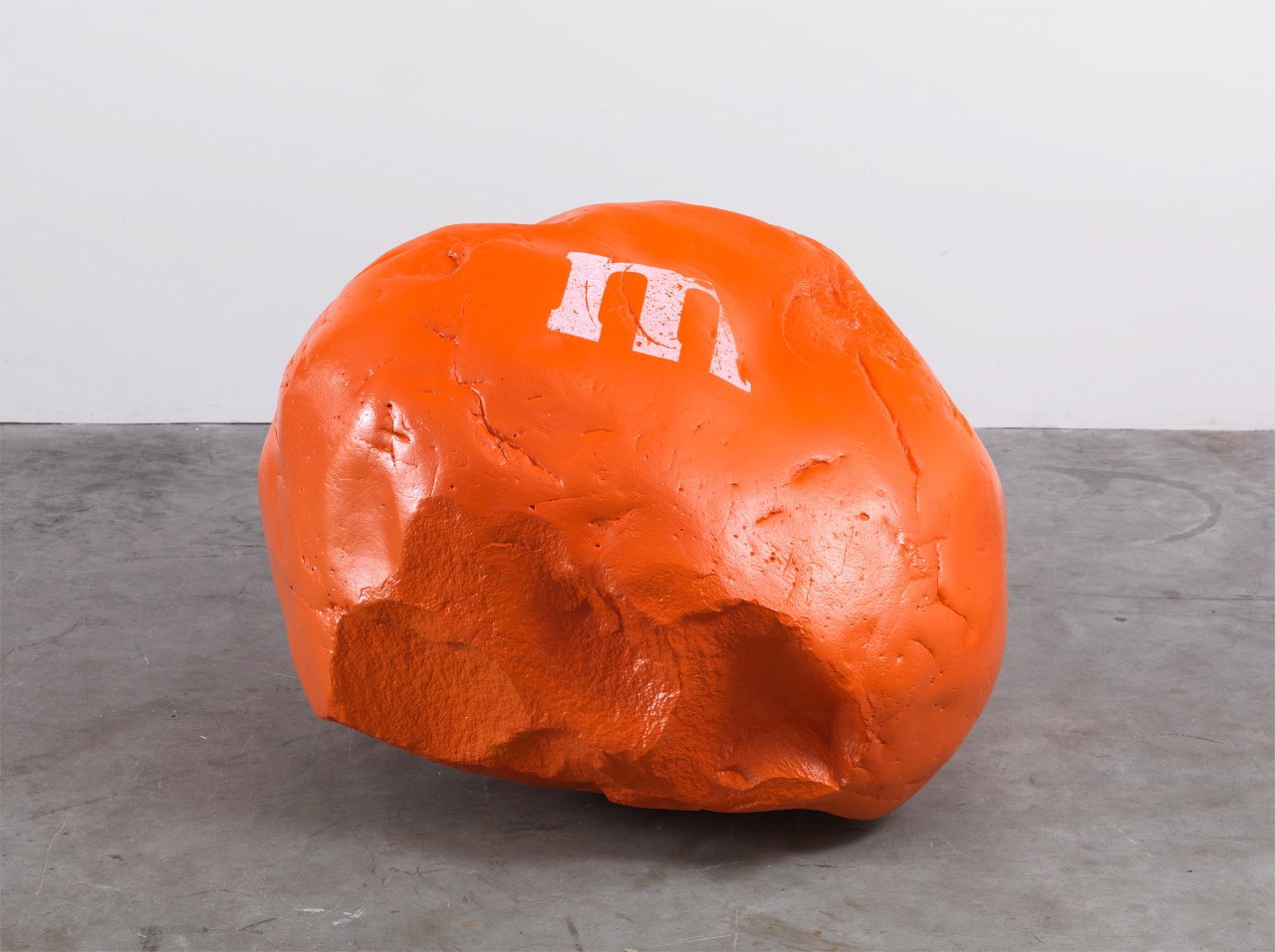 The work “A Million Kisses in Your Lifetime” (2008), created with the use of lipstick, marked the beginning of a series of works under the conventional name Kiss Painting. It is believed that this canvas, on which the unknown girl left a huge number of prints of her lips, painted with different shades of Chanel lipstick, Dan presented to her brother as a wedding gift. A couple of years later, he divorced and put the painting up for sale, providing a fabulous price tag. Colin himself claims that this object is a kind of homage to Oscar Wilde, whose grave is located in the Paris cemetery of Per Lachez: it is known that especially exalted admirers of the English playwright leave their kissing prints right on the tombstone. 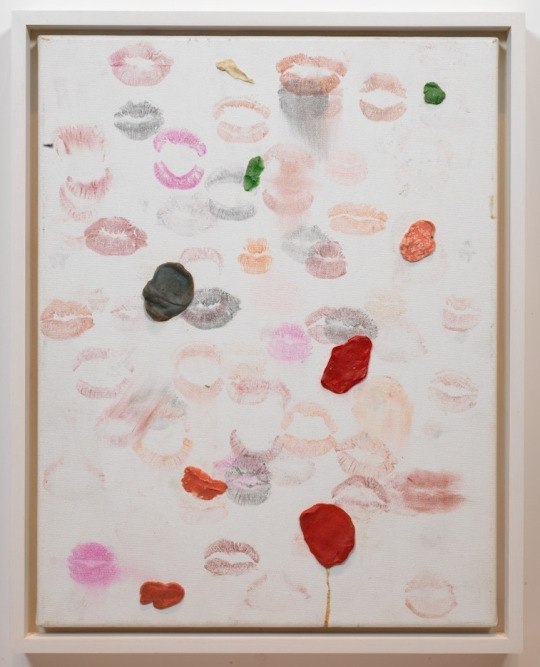 Modernity and mysticism in the art of Dan Colen

Dan Colen – disagreements. The media portray him as a bad boy, the modern Warholian movement fighter is against respectability. Colen himself described his way of life in New York in the 2000s, agreeing that he made some way to make it successful – “Bad Boys Sell”, there is an article. 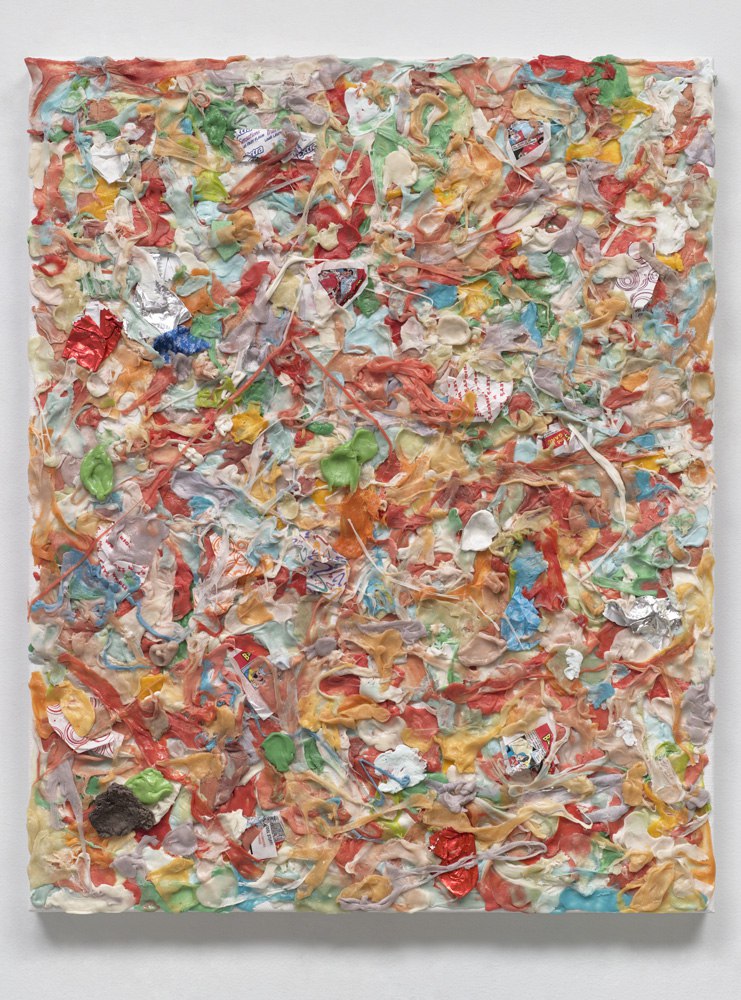 Fame is marked by Colen from an early age, but most miss the artistic influences of his childhood. His father is a sculptor of wood and clay, and many of Kolen’s early friends were based on mutual appreciation of art. Famous examples include Ryan McGinley and late Dash-Snow, with whom his depraved figure was created.

Unlike his intoxicating lifestyle at the age of 20, Colen now lives on a farm in the Hudson Valley in New York City, caring for livestock and working, and this new pastoral spirit permeates his work. It’s often hard for us to imagine how we can reconcile modernity with the natural world, but his work brings magical realism to the modern city. 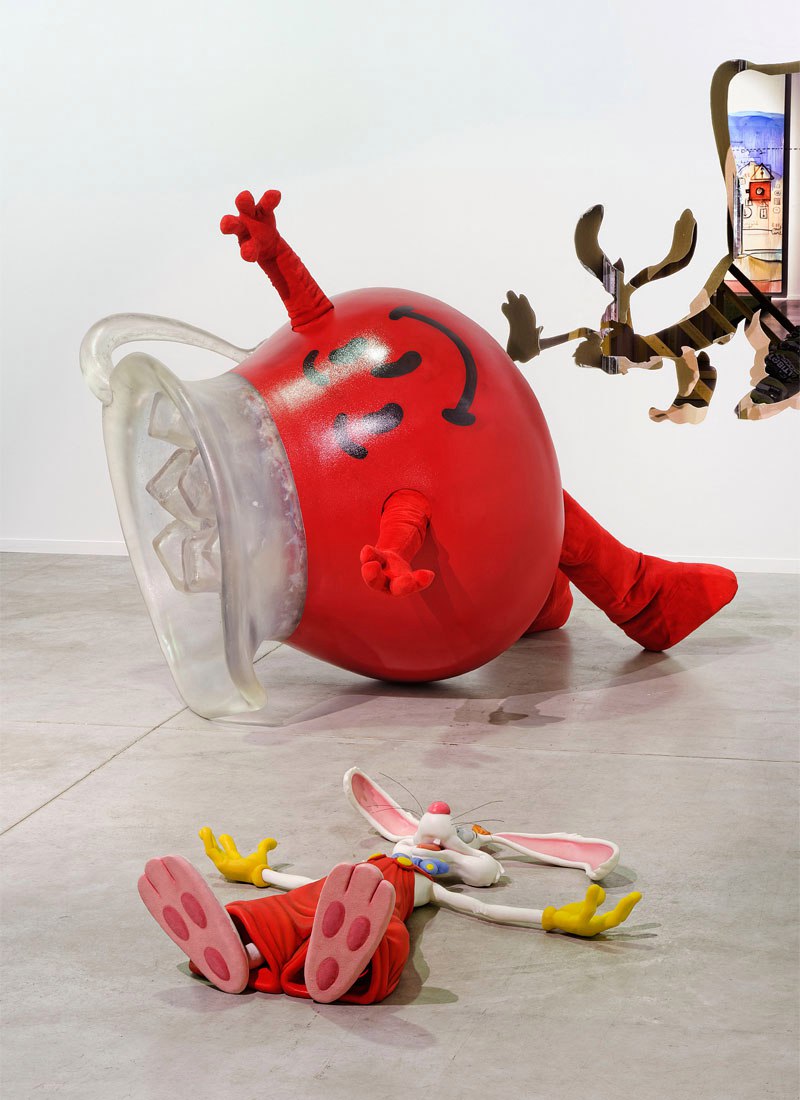 It is often difficult: bird’s faeces on white canvas; stern, skinny statements are thrown randomly through perfect enamel-covered boards; chewing gum on seemingly negligent surfaces. There is a lot of sadness – perhaps in recognition of the difficulties of being a creative young man in such a flying age and profession.

The work of Colen Untitled (Vete al Diablo) in the Saatchi Gallery in London explores this visceral tension between modern and natural. Neon graffiti layers cover the surface of a rock that stands proudly and vertically, resembling an ancient standing stone. The words “Holy War” are shouted out of handwritten voices. Is the surface damaged? Or is the rock just rock without a surface? 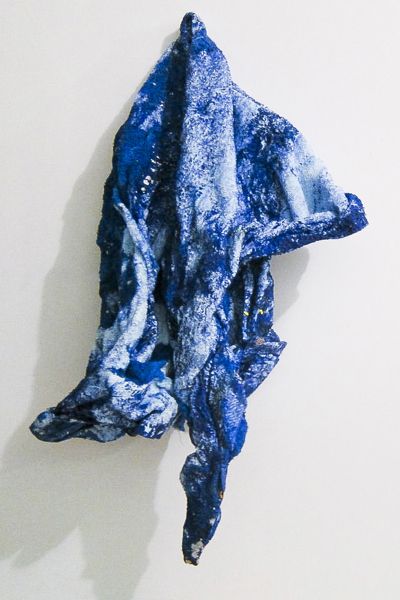 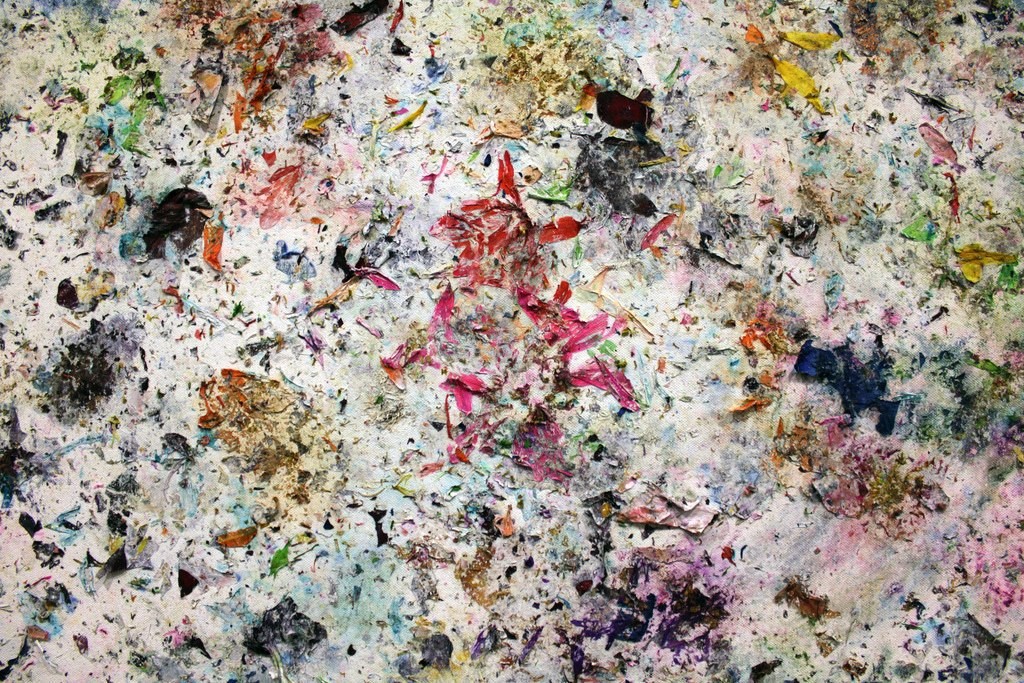 Or take his paintings “The Trip of Valkyrie” and “The Apprentice of the Wizard,” as in his paintings “Miracle-2013. In the first, ghostly figures are drawn through the original plasma, the figures are tightened like transient creatures of his favorite fairytale stories. In the latter, the shimmering arc rises to the trembling surface of the purple – a hint of Fantasy – and in this unusual magical gesture, Knee opens his audience to the magical world. The arc beckons us as if it were Neverland.

Colen’s work also deals with the role of the artist associated with the idea – prominent in aesthetic theories and texts – that the origin of art goes beyond the individual. His works certainly have a spiritual presence, and Colen noticed that his miracle paintings are “portraits of God”. This comment and postpones – meaning the touch of a complex of messiahs – and intriguing, the basis for the study of the work as an understanding of popular notions of God: illusory, enchanting and dangerous.

The knee is too easily written off as the demigod of modern decadence, but this does not recognize his contribution to myth and spell. His work subtly presents the themes of intimate care for all. Knee’s work develops with age, and in the coming years, you can expect from this small farm in the Hudson Valley. 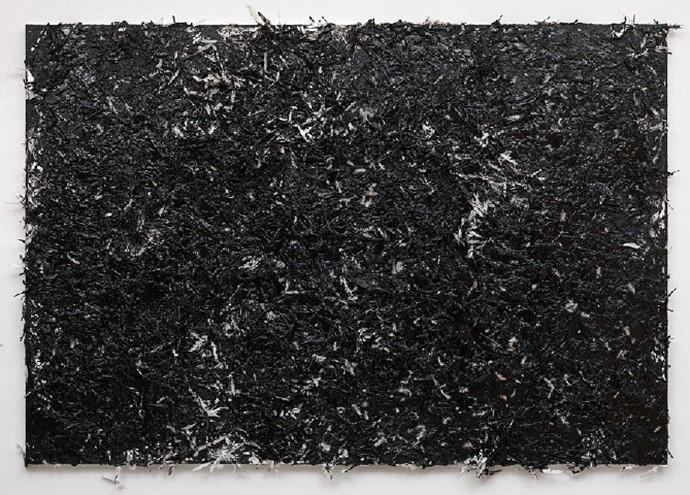 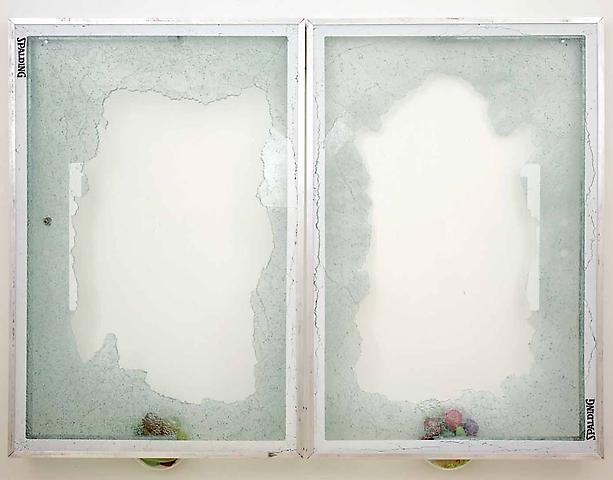 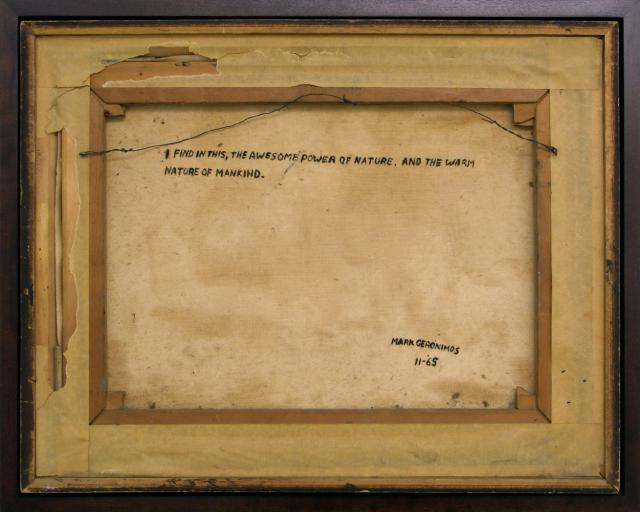 Perhaps one of the most commercially successful artists who work with gum is Dan Colen from New York. In his works, he uses all kinds of improvised materials: resin, feathers, flowers, food waste – but gum is one of his favorite brush and paint substitutes.

Painting ‘S & M’, was “created” with gum on canvas, and in 2010 was sold at an auction for half a million dollars. 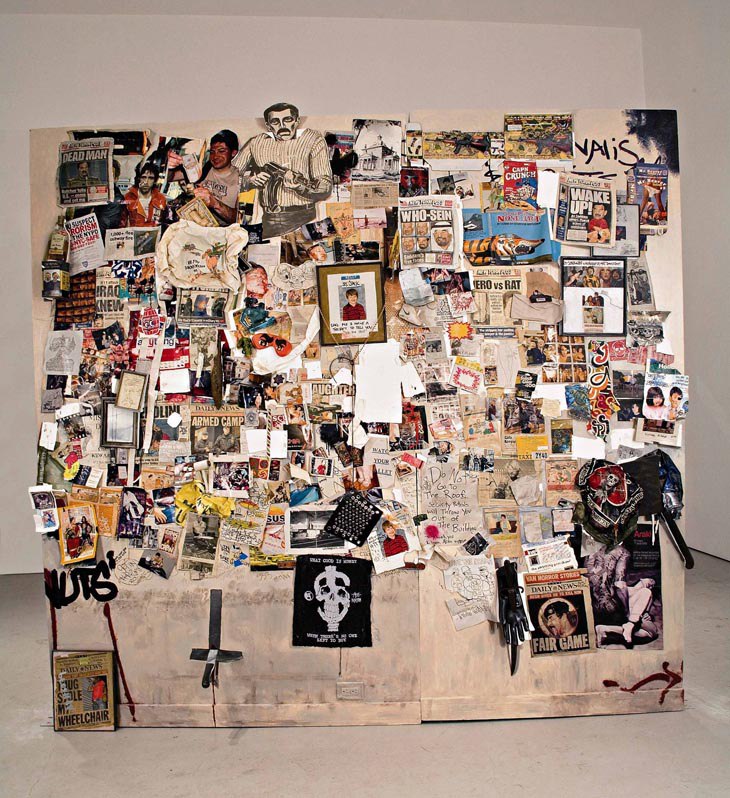 The artist Dan Colen has recalled the American billboards and wrote simply, but clearly: No sex! No war! No me! (No sex! No war! No me!). And “the Wall of my friend Dash in the future” as if telling everyone “wake up! (Wake up!). Here are newspaper clippings, murders, ugliness, printouts from porn sites from the Internet, screaming headlines say that the work is done not only classical materials… Instead of paint, feces, and other items of the human body were used. However, it is unrealistic to comprehend this with the naked eye, although who knows if it is not a joke. Kristina Baker also conducted experiments with materials, using polyvinyl chloride, painted in bright colors. 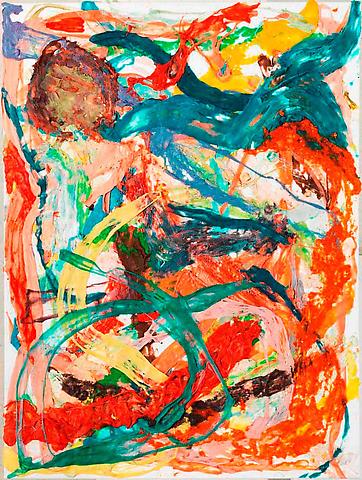 This is probably interesting. Ordinary plastic is skillfully combined in density and tone, even if it screams, but shattered to shreds, like a car racer in the painting Washzert Suisse. You can just stand and look at the work, slowly experiencing color hypnosis. 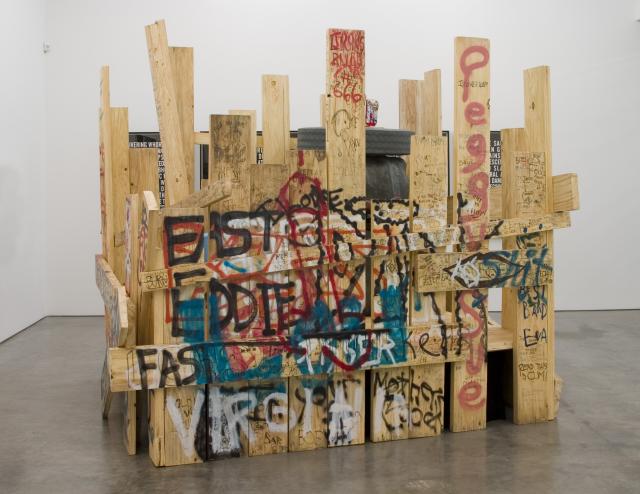 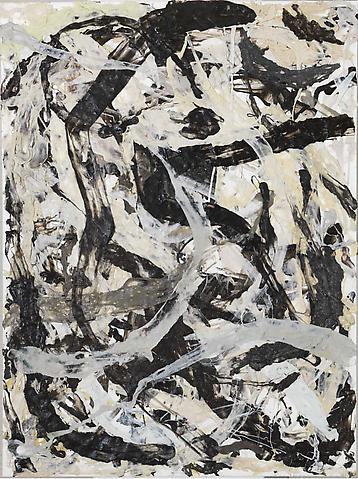 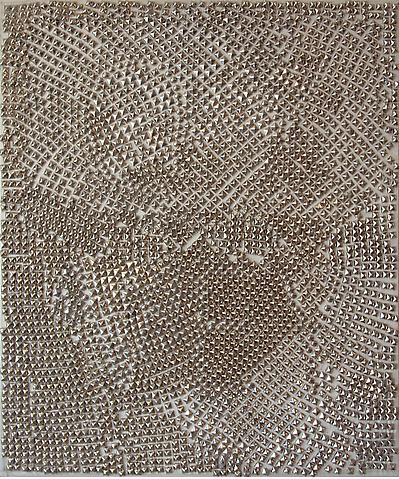 Dan Colen draws images from mass media and subculture. In “Untitled” (Vete Al Diablo), the graffiti boulder looks like a real stone from a suburban wasteland that has become an object of vandalism, although the object is actually made of papier-mache. Powerful as a monument, it instantly refers to adolescent rituals, exuding the aura of a degenerate totem. Referring to Eda Rush as a source of influence, Knee often uses text in his work. Colen’s text paintings, such as “Rama Lama Ding Dong”, are quickly sprayed words on a sheet of plywood. Citing song lyrics, random thoughts, absurd slogans, the artist creates a peculiar form of urban poetry. The works preserve the tension between the immediacy of expression and the perfection of the surface.
Knee’s series of still lifes look at first glance like a tribute to the 17th century still life tradition, although they are actually copied from Disney’s “Pinocchio” (1940). 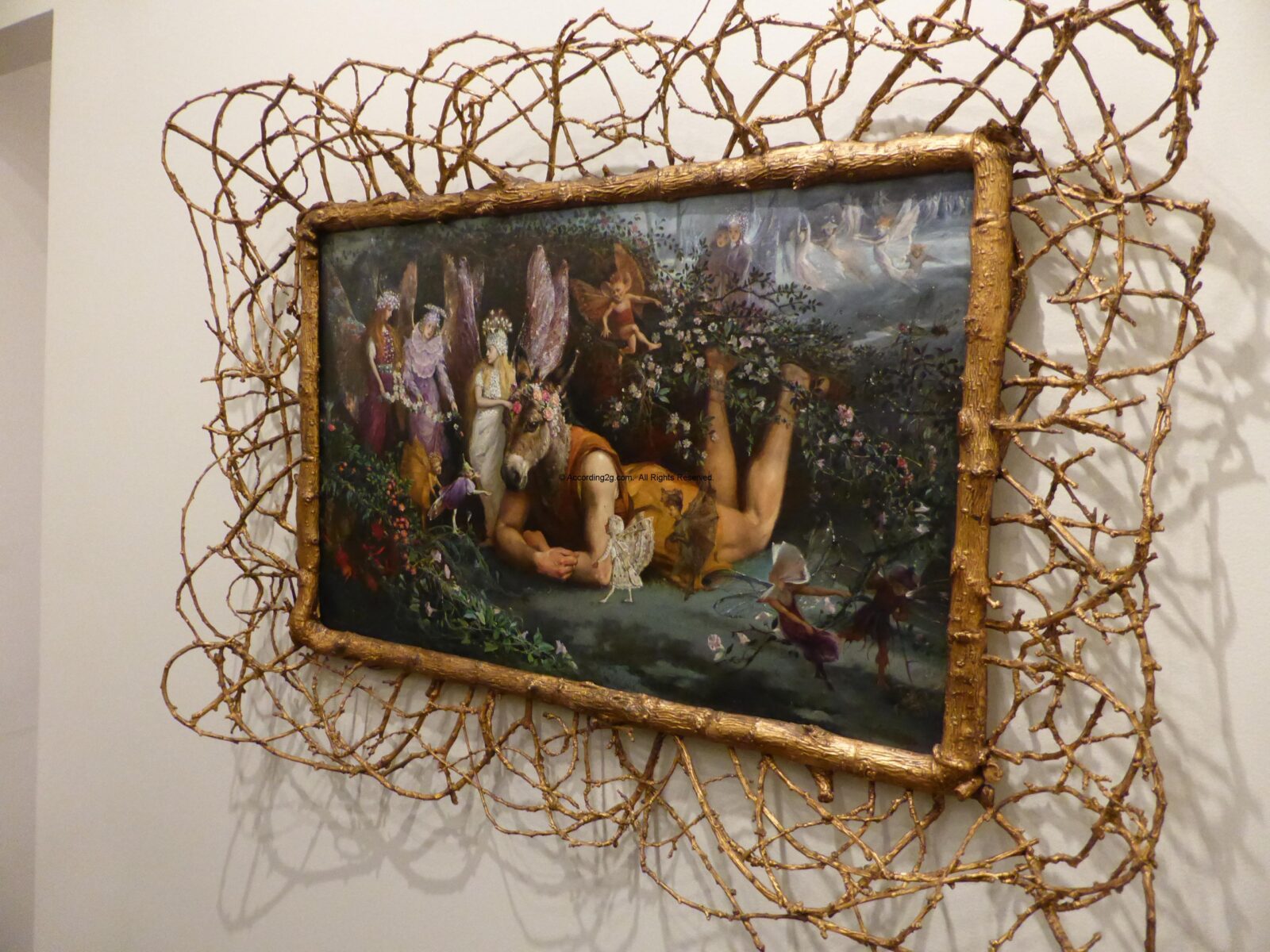 The central element is the sculpture of a naked woman lying and waving a rabbit on her chest, inspired by her former friend Knee, it is made of steel and painted in cream color. On the walls hang a series of paintings called “Mother” inspired by the cartoon scenery from Disney’s “Bambi”. Each painting is a discrete frame of animation, with small changes from one to another. 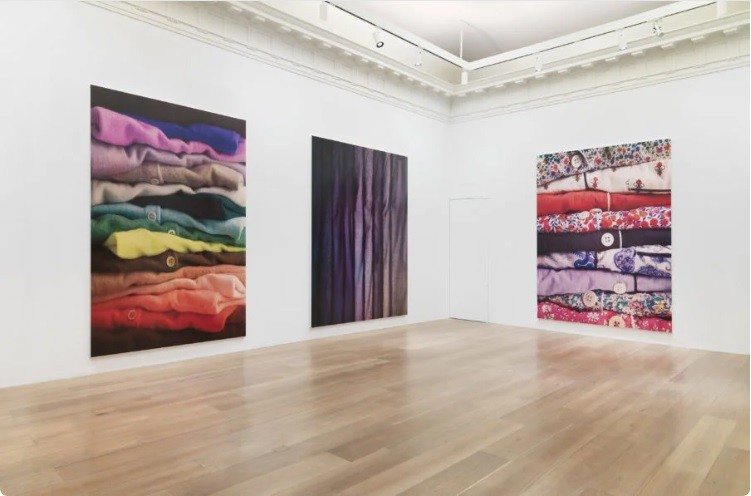 The author also presented works from the “Purgatory” series, abstract paintings in purple and bright blue with foggy edges and blur lines. Unlike other works, the paintings are devoid of any obvious object.

“Purgatory is really a grave, it’s a story about a decent, but I imagine it as an ascent. – says Kolene in an interview.

British artist Damien Hirst in his Newport Street Gallery in London in 2017 showed off his close colleagues in spirit. After Gavin Turk, space was occupied by the works of fashionable American Dan Colen, who became the heir to Jean-Michel Basquiat in the USA.

The art by Colen, who appeared on the art scene in the early 2000s, is very American. It seems that he absorbed everything that was done in the mass culture of the USA before him, from abstraction and Disney images to graffiti and bright colors of pop art. To become a fashionable artist at the beginning of the XXI century, he had only two components to add to this considerable heritage – technologicality and socio-political notes. What he successfully did and was noticed not only in America, but also on the other side of the ocean, for example in England, the famous collector and gallery owner Charles Saatchi. In 2005, he already took part in group exhibitions at the legendary Barbara Gladstone Gallery in New York, and in 2007 he was included in the “America Today” exhibition, held at the Hermitage with the same Saatchi.

About sixty of his works, made in the last fifteen years, were exhibited in London for the first time on this scale. These include abstract paintings, collages of magazine pictures, large installations, and famous sculptures imitating urban dumps painted with graffiti. 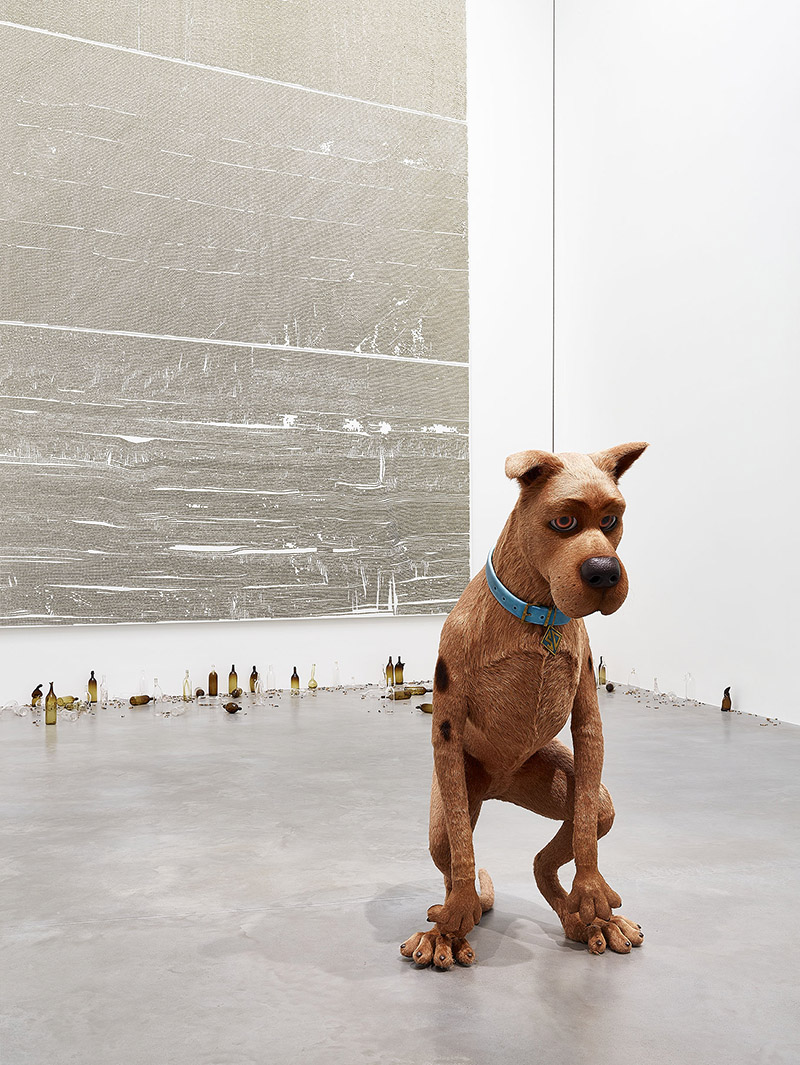 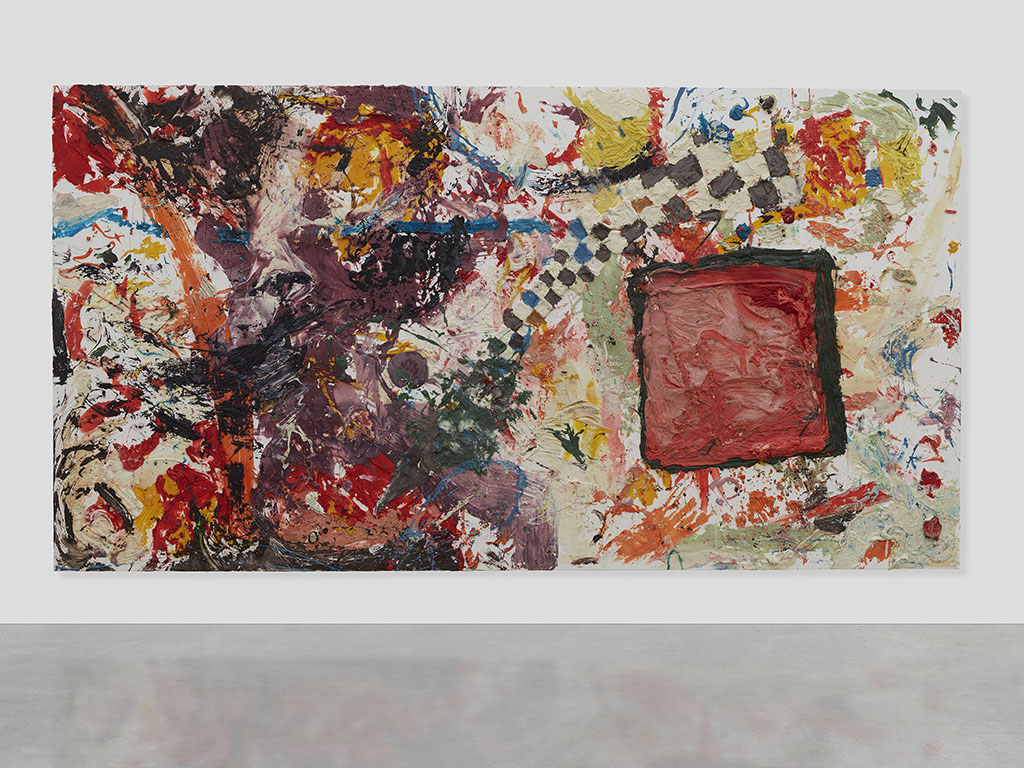 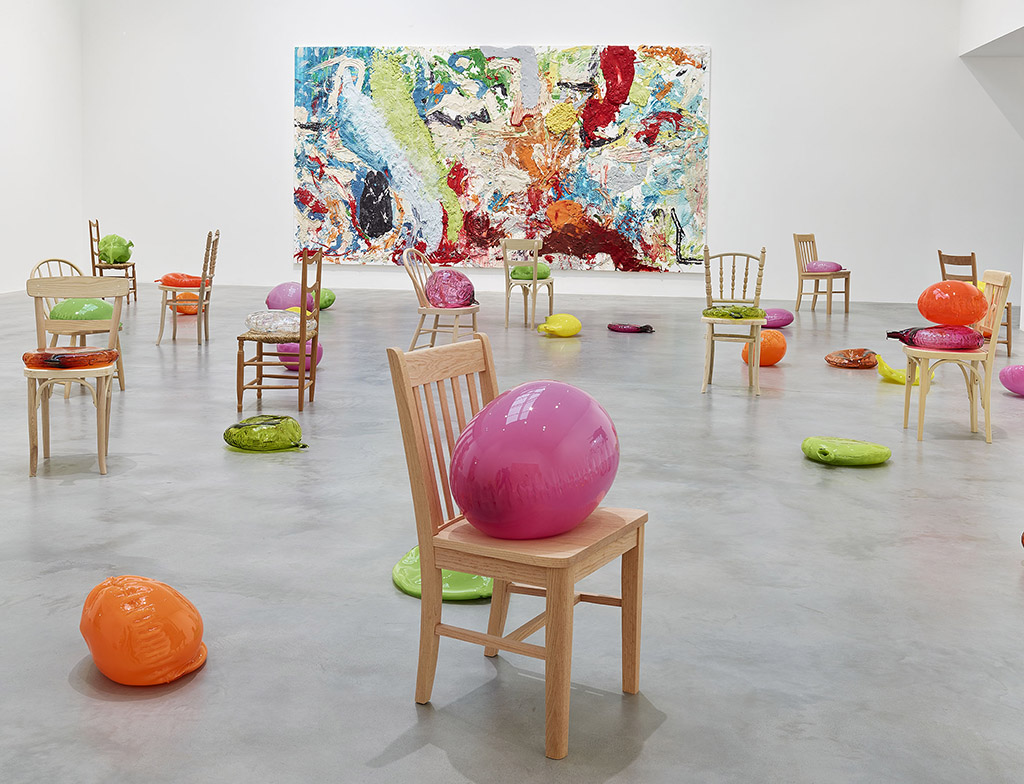 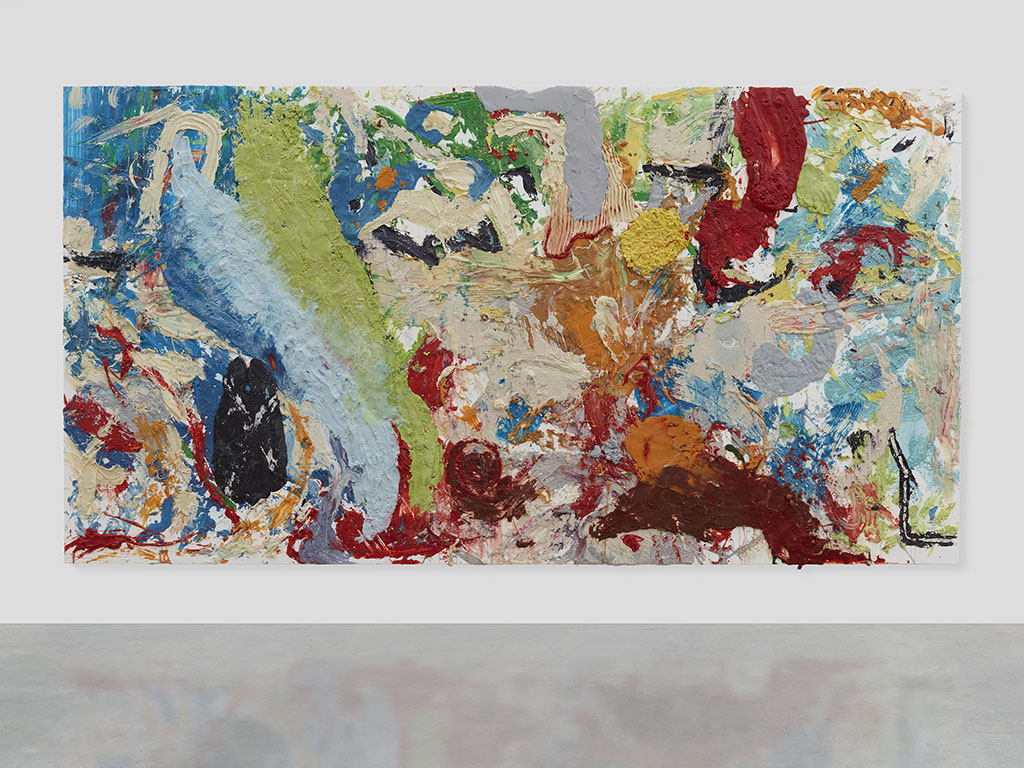 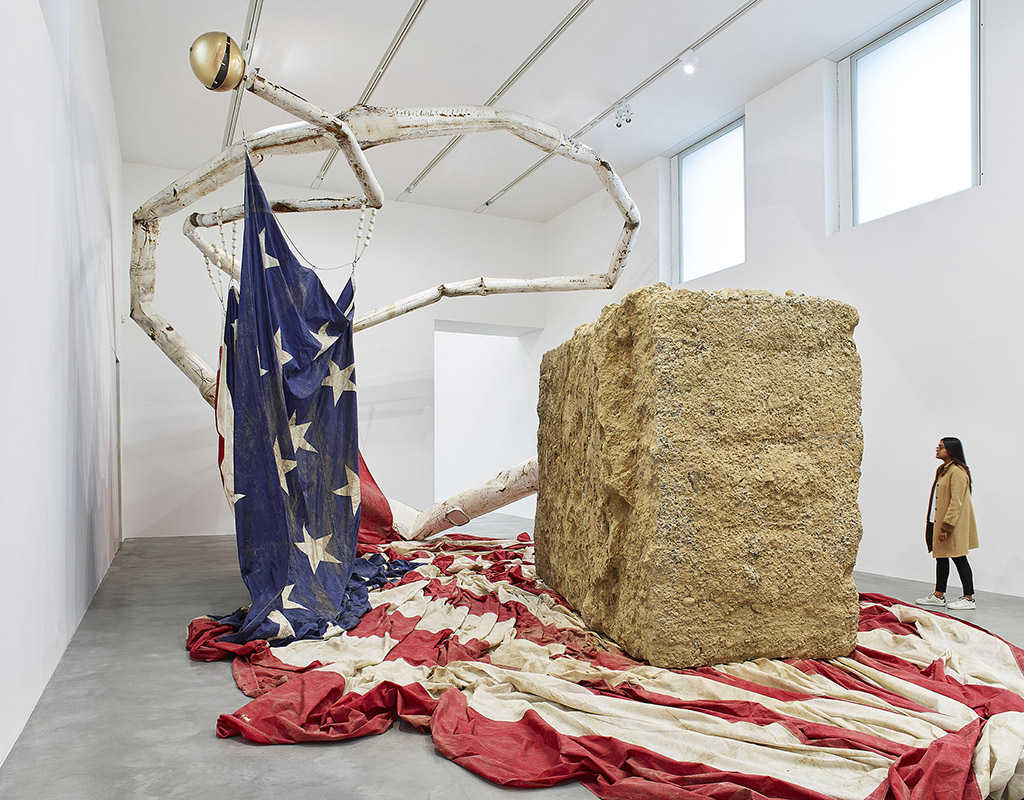