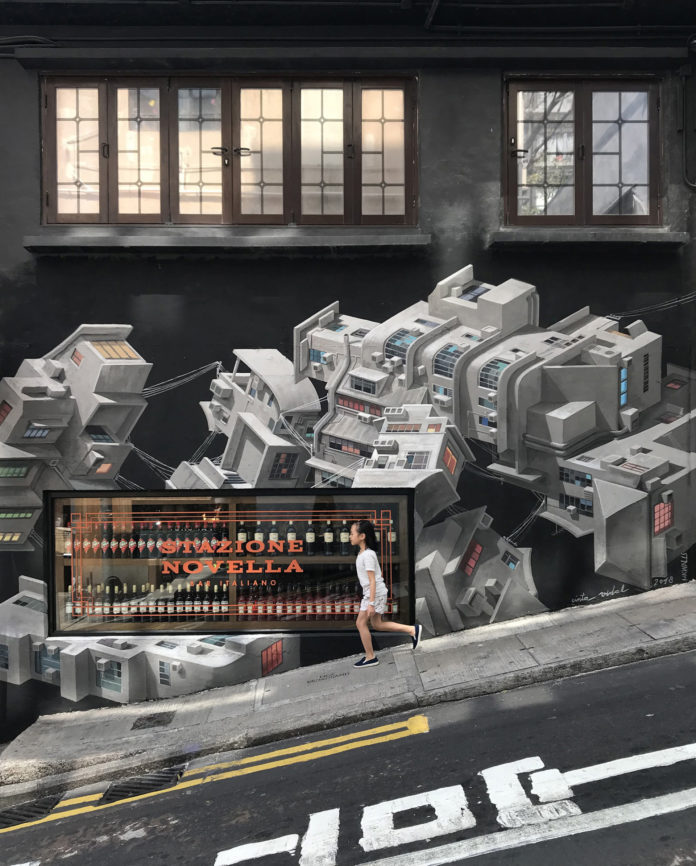 For Cinta Vidal, everything depends on how you look at it. The Barcelona-based artist is known for her gravity-defying projects that manipulate architecture and household objects to create inverted environments dissimilar to daily life. Like her smaller-scale inverted works, Vidal’s murals are concerned with human subjectivity and feature both peculiarly arranged architecture and objects like books, chairs, and even a canoe floating through the air. They cover walls throughout Los Angeles, Hong Kong, and Barcelona, among other cities around the world.

Whether it be a young girl seated on an oversized globe or a man peering over a balcony that’s tipped at a 90 degree angle, the works consider how perspectives are informed by a subject’s position.

Everyone has their own view on the world, and my work is my way of expressing this idea: it’s impossible to view something from every perspective at the same time. There’s always a choice, a perception. In my work there also lies a desire to take things out of context, releasing them into the air and, by doing so, giving them new value.

The artist tells Colossal that once she chooses a location to paint a mural, she studies the areas nearby. Vidal intends each project to become part of the existing environment, often prompting her utilize the color already on the building’s surface as her background. “Paint(ing) a mural is about interact(ing) with the wall and everything that surrounds it,” she writes. To get the latest on the artist’s creations, follow her on Instagram. At the Honolulu Museum of Art At a public library in Cardedeu “Viewpoints” for Thinkspace in Los Angeles