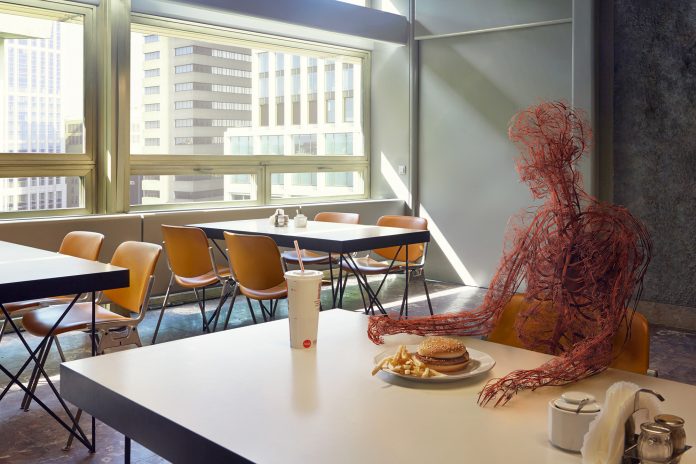 Back in the early days of anatomical illustration (c. 1500 – c. 1800), artists often rendered the human figure within the lavish landscape of the anatomist’s hometown. These historical illustrations are part of what inspired photographer Jan Kriwol and CGI artist Markos Kay to create the photographic series Human After All. The main character is the human circulatory system in the context of mundane urban life—grocery shopping, eating a burger, and even taking a cigarette break.

The Warsaw-based Kriwol is influenced by his connection to the Polish urban skateboarding scene, and he often infuses his photography with optical illusion and humor. So when he saw his girlfriend’s drawing of a human circulatory system smoking a cigarette, he thought creating a realistic version was the perfect challenge.

Kriwol approached several CGI artists with his idea, but the complexity of the project proved too difficult. He finally found Kay, a self-proclaimed visual alchemist based in London, who immediately took to the challenge of figuring out how to render the circulatory system in a way that looked as natural as possible. Kay found inspiration in the anatomy textbooks of Andreas Vesalius, Giulio Casserio, and Henry Gray. The two artists also studied images of the plastinated human circulatory systems pioneered by Dr. Gunther von Hagens of the infamous Body Worlds exhibits.

Kay shared with VICE Creators Project that, “the biggest challenge for this project was creating an anatomical character that looked life-like and integrated with the real environment. We spent a lot of time experimenting with different postures, and oftentimes we had to exaggerate the posture greatly so that it could translate visually with the deconstructed structure of the circulatory system.”

Kay started by modeling the main arteries and then used generative simulation to organically grow the thinner arteries and capillaries to fill out the figure. Meanwhile, Kriwol shot the urban settings in Warsaw, Tel Aviv, Masada hill in Israel, Grenoble, Berlin, and Brussels, as well as Cape Town, South Africa. Kay then recreated each photographed environment in 3D so that he had control over the reflections and shadows. The end result is a harmonious render of a delicate anatomical figure within its environment. Especially fitting is the circulatory figure at the bus stop with its reflection of the rivers and tributaries in the topography map.