Yohji Yamamoto is a  creative professional who managed to create a recognizable style and influences modern culture. He turned 70 on October 3. USA Art News traced the creative path of the famous Japanese designer and figured out how Yamamoto has influenced modern fashion.

World War II and the start of a career

Yohji Yamamoto was born in Tokyo in 1943 at the height of World War II. In 1945, his father died at the front, causing the boy’s mother to wear a black mourning color for the rest of her life. In addition, when Yohji was only two years old, there were nuclear explosions in Hiroshima and Nagasaki. These events had a big impact on the designer’s future: black and chaotic asymmetry will be the leitmotif of his collections. 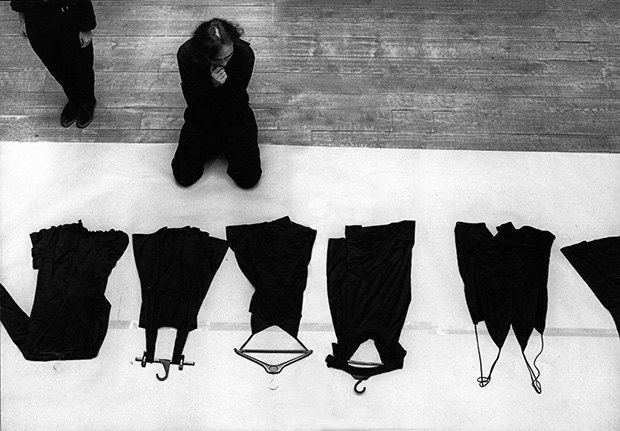 Yamamoto didn’t immediately choose a career as a designer. It was only after graduating from Keio University Law School at Tokyo that he entered the famous Bunka Gakuen Fashion School in Japan, where Issei Miyake and Kenzo Takada studied. Three years after graduating from the School, Yamamoto created his own clothing brand, and in 1977 he showed his first prêt-à-porter collection in Tokyo.

The ’80s: the atomic bomb explosion in the fashion world

The real fame of the Yohji Yamamoto brand was brought by a collection of 1981, which the designer presented in Paris. The models defiled without makeup, dressed in black asymmetrical clothes and rough shoes. This show shocked the public, accustomed to the abundance of make-up, wide overhead shoulders, and high heels. The fashion press had declared Yamamoto’s design to be “the end of fashion”, with many critics pointing out that the cut of his clothes resembled a “mushroom from a nuclear explosion”.

Together with Rei Kawakubo, Yamamoto has turned the ideas about color and silhouette that have dominated the fashion world. Thanks to these designers, black is no longer considered dull and depressing. Also, Yamamoto was one of the few people.

Many journalists have noted that the cut of Yamamoto’s clothes resembles a “mushroom from a nuclear explosion of the 1970s and 1980s designers who didn’t like the aggressive sexuality that reigned on the catwalks at the time. He believed that what’s hidden underneath the clothes is more attractive than the open, so most of his works show the body no more than Japanese kimono.

In 1984, Yamamoto presented for the first time in Paris a men’s collection with a traditional aesthetic: asymmetrical sleeves, collarless shirts. Not everyone could appreciate the shocking design: even in Japan people dressed in this brand were called “crows”. It was in the 1980s that Yohji Yamamoto became a clothing brand for a narrow circle of people.

New sources of inspiration and the Wedding Collection

In the 1990s, black asymmetrical clothing stopped epitomizing, and other designers began to copy the Yamamoto style. That’s when he started looking for new sources of inspiration and turned to the aesthetics of romanticism, Belle Époque, and post-war fashion. The “Wedding Collection” of 1999 ended this decade in the brand’s life. Yamamoto turned the show into a show: girls dressed as maids, widows, brides came out one after another on the runway, each one taking off layers of their clothes. 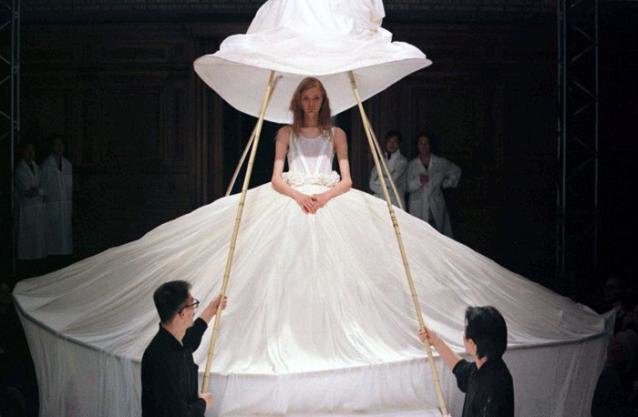 Yamamoto received several prestigious awards in the ’90s: he was awarded the Order of Arts and Letters of France, the Night of Stars Award in New York, the Florentine Arte e Moda Award, and the International Fashion Design Council of America (CFDA).

Y-3 and other new projects

In 2001, Yamamoto surprised many fashion critics – together with Adidas he launched the Y-3 line. The collection was a huge commercial success. Yamamoto announced that his collaboration with Adidas was one of the first “bridges” between sport and fashion. The designer was convinced that in this way high fashion could influence the street culture and make it more aesthetic. 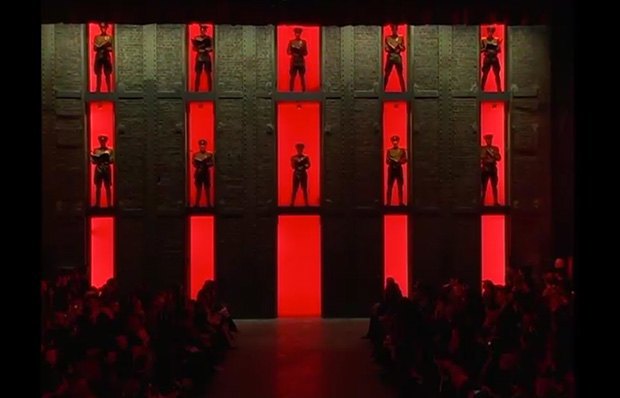 Cooperation with the sports brand has not prevented the development of Yamamoto’s own company. In 2005, he presented a collection inspired by the Edwardian era. Although the elegant pleated evening dresses from this collection were not very similar to the designer’s early works, he remained faithful to the asymmetric cut and black still played an important role.

In 2008, in anticipation of the global financial crisis, Yohji Yamamoto founded the Yohji Yamamoto Foundation for Peace to support China’s fashion industry and model business. Thanks to the foundation, every year young Chinese designers receive an internship at a fashion school in Japan or Europe, and Chinese models make their debut at Paris Fashion Week.

Bankruptcy and revival of the brand

2009 becomes the hardest year in the life of a fashion brand and its founder: the company, which owed $65 million, was declared bankrupt. However, the bankruptcy has not put an end to Yamamoto’s career. As early as the fall of next year, Yohji Yamamoto got rid of its debts and restored its operations. The collection presented by the designer in 2010 was a great success. This time Yamamoto turned to the aesthetics of workwear and modified chef jackets, sailors, school uniforms, and work overalls. As always, the collection was kept in subdued shades of blue, coral, and cream.

In addition, in 2010, Yohji Yamamoto published an autobiography of My dear bomb in which he summed up his thirty-year career.

Presentation of the first collection in Tokyo.

The debut of the Yohji Yamamoto brand in Paris.

Show of the first men’s collection of Yohji Yamamoto Homme in Paris.

Yamamoto becomes the first Japanese to receive the title of Cavalier of the Order of Arts and Letters of France.

The brand launches its perfume line.

Presentation of a capsule collection in collaboration with Adidas.

The designer receives the Order of Culture of Japan.

Correspondences exhibition at the Gallery of Modern Art of the Palazzo Pitti in Florence.

Yohji Yamamoto Inc is on the verge of bankruptcy.

Yamamoto is publishing his autobiography “My Dear Bomb”.

The aesthetics of Yohji Yamamoto’s collections have transformed the fashion of the 1980s and 1990s. The “new black” he discovered influenced many designers of the next generations, such as Junya Watanabe. The Yamamoto style has also influenced young designers such as Gareth Pugh.

Yohji Yamamoto didn’t limit himself to designing everyday clothes. In the 1990s and 2000s, he created costumes for many theatrical productions and films. The designer worked on the design of classical operas: “Madame Butterfly” (Lyon, 1990) and “Tristan and Isolde” (1993, Beirut). Yamamoto also collaborated with the famous director Takeshi Kitano, in particular, the designer created costumes for the famous film “The Dolls”. Under their influence, Kitano partially changed the plot of the film.

Yohji Yamamoto at the V&A. In 2011, the Victoria and Albert Museum in London presented a major retrospective on the work of Yohji Yamamoto. According to the curators of the exhibition, Yamamoto is one of the most influential designers of the last forty years.