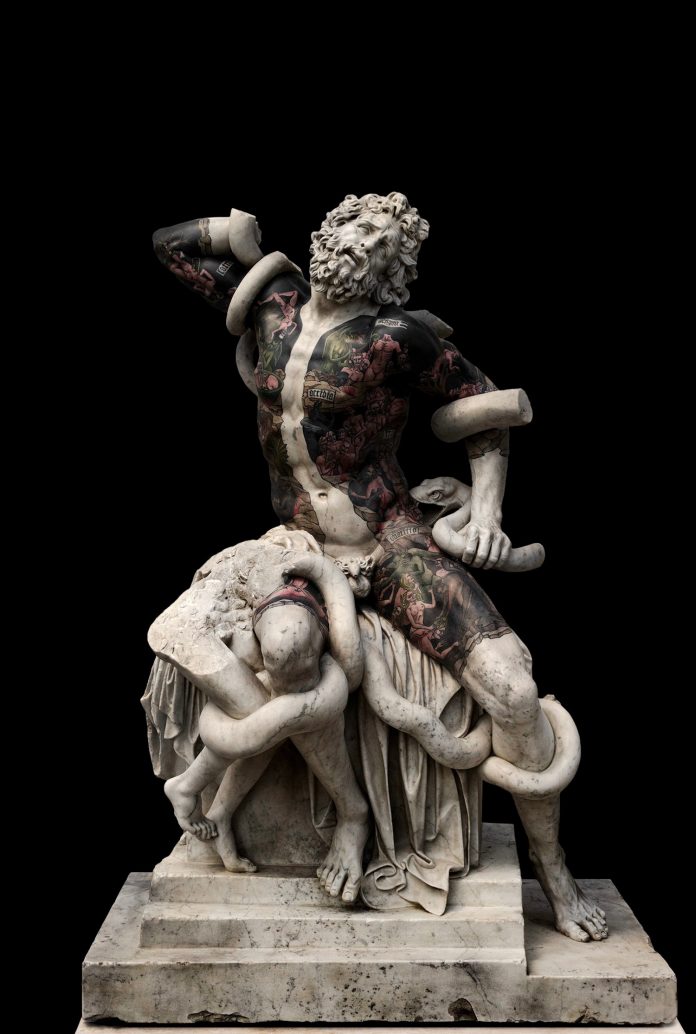 Italian sculptor Fabio Viale inks his marble reproductions of iconic sculptures with heavy scenes of ancient stories, swirling waves, and foreboding clouds. Each vine, flower, and dragon-based composition is settled on a darkened backdrop that tends to envelop an entire back, leg, or shoulder, triggering an uncommon amalgam of material and form.

Viale doesn’t paint the marble but rather infuses an arm or chest with color and pattern in a manner that’s similar to tattooing a human body. He collaborated with chemists to refine the blended technique and said that “not surprisingly, each natural material has its strong personality and difficulties connected to it.”

In an interview with designboom, the sculptor spoke about merging art history and what he terms the “‘criminal tattoo,’ imbued with symbols and representations that derive from artistic imagination.” Viale says that by reproducing classical works rather than creating his own busts and marble statues, he’s able to better understand the original artist and the sentiments behind the iconic pieces.

It is a meeting between life and death, between the sacred and the profane. A combination, the relationships between these two sets, results in a solid bond that creates energy: The preconception we have of classical beauty and the hardness inherent in a certain type of criminal tattoo provoke gasp and wonder.

In comparison to the original Roman sculpture, Viale’s Laocoön is missing one boy on his right side. The main writhing figure is covered from mid-thigh up to his neck and down to his forearms with dark illustrations that include the seven deadly sins in “The Inferno,” which was painted by Giovanni da Modena in the 15th Century. Both the sculptor’s “Venus de Milo” and pair of hands are covered in code often found marked on Russian inmates.