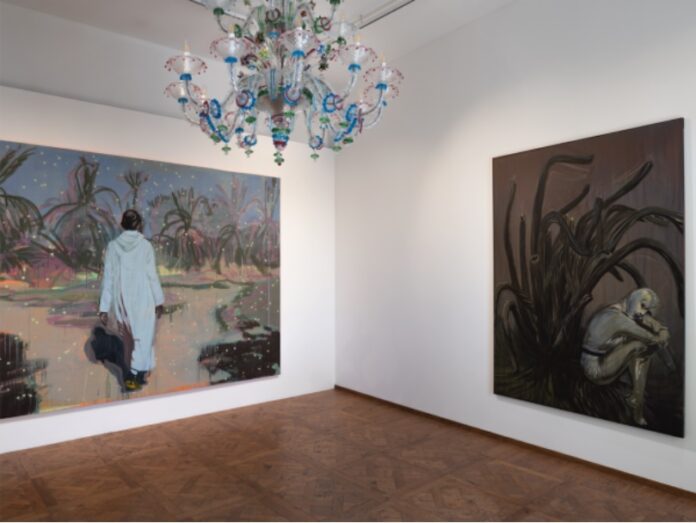 Claire Tabouret’s exhibition “I am spacious, singing flesh” at the 2022 Venice Biennale is the artist’s first collateral event in Venice ever.

Through a range of figurative paintings made over the last several years, Tabouret explores variations of the self and identity, using various renderings of women and children from a bygone era that Tabouret lifts from archival photos. These subjects are often in group poses, sometimes double-faced, or wading through foggy landscapes.

Along with these 25 works, Tabouret’s show—which runs from April 23 to November 27 at the Palazzo Cavanis in Dorsoduro—also includes Italian devotional artifacts on loan from a regional museum.

All of the work is a continuation of Tabouret’s probes “about the formation of subjectivity and the construction of identity, underlining fluidities and multiple levels of identification and transformation: of self, other, collective identities, of attempts to understand these in relation to gender and cultural backgrounds, the show’s Paris-based curator Kathryn Weir told ARTNews.

“The search for a curator ended very quickly with Kathryn,” said one of the show’s organizer’s Martin Bremond in an interview with ARTnews. “Her work around performances and identity search has been a key part of her curatorial research. She was the one able to connect Claire’s work to some of the central key ideas of the Biennale.”

To learn more about the exhibition, ARTnews conducted an interview with Tabouret and Weir over email.

In much of Tabouret’s work, her figures— often references to renderings of women from the past donning various costumes— seem to be in obscured environments or states of flux. How does this come into play in these works?

Kathryn Weir: Tabouret’s artistic language unfolds alternative, often mysterious, states of being, and entangles individual identity in broader forces. She toys with costume, makeup, markers of horror, power, and adventure, enacting forms of rebelliousness and resistance, notably of children against adults’ ideas of childhood, and against binary notions of gender. Masks, makeup, and costumes recur in Tabouret’s work, including gas masks and women corseted in leather and hobbled by stilettos; various works from 2015–16 take the work of Georges Bataille as a point of departure, notably the series Les Étreintes as well as orientalist and exoticized portraits of women by painters such as Delacroix and Gauguin.

In La Pieuvre (2015), the female figure sparks ambiguous associations that cross from monstrosity to the super hero to sadomasochist ritual. These processes of transformation go beyond binary categories and create alternative relationships between those depicted and their environment.

How does the theme of transformation unfold in the works on view in this exhibition? How does this relate to self-portraiture?

Claire Tabouret: There is often a visible transformation of the figures in my work, whether it’s through costume, makeup, artificial colors, etc., but I also want the viewer to be confronted by the feeling of change. I’m interested in the point when one thing is turning into another — I want to suspend that moment in time.

Weir: Self-portraiture is a consistent line of Tabouret’s practice that captures fleeting states and more profound transformations. In Self-portrait double (2020), Tabouret metamorphosizes into a two-headed creature; Self-portrait as a vampire (2019), where her lips are smeared with blood, makes a disturbing pendant to earlier depictions of Les Mangeurs (2013), babies with their lips smeared with food.

The exhibition includes several devotional artifacts dating from centuries ago. Why were these included?

Weir: In February 2022, the artist gave birth to her first child, experiencing this intimate doubling, what Cixous describes as being ‘the locus for the other’ and ‘the intimate recipient who makes all metaphors possible and desirable’. This other embodied creative process is giving rise to new questions in Tabouret’s practice in regard to subjectivity, flesh, fluidity and creativity.

The two ‘Madri’ ex-voto sculptures in volcanic tuff included in the exhibition date from the 6th–3rd century BC and were given by women, in thanks for the children they had borne, to a temple probably dedicated to the Mater Matuta, the pre-Roman Italic divinity of dawn and fertility. They were discovered at Petrara in 1845, near ancient Capua, at a site where inscriptions were found on architectonic elements in Oscan, an Italic language of southern Italy. The statues are representations of the women devotees with their swaddled babies.

Figures are central in much of the showcase, but they are accompanied by various sculptures that occupy vacant space. What role do these structures play in the exhibition?

Tabouret: La Cabane (2009) is a model of a tent or a hut, a temporary shelter. These types of structures tend to be transitory and ephemeral in nature. You can see this reference also in The Peace Commission Tent (2010), which depicts a tent that might be used for negotiations in a battle or other conflict. The absence of any figures in these works compared to other paintings in the exhibition gives us the feeling that something has happened here — this fleeting refuge has been abandoned.

Weir: Empty houses and other forms of shelter without visible human occupation are a recurring subject in different groups of paintings, notably the Maison inondées, and in sculptures like La Cabane (2009) and Le Temple (2021). The Eclipse (2017) also creates an atmosphere of suspense through its very cinematographic staging in relation to unseen action ‘off screen’, perhaps the astronomical event mentioned in the title: the moon, associated with water and women, comes into conjunction with the force of the sun and the obscurity of the eclipse is an uncertain omen in a gathering crisis.

In The Team (2016) and The Spell (2018) we see various female figures in these transfixed poses. Are you referencing a photograph or historical painting in these works?

Tabouret: The starting point for The Team (2016) was a photo I found of a women’s basketball team, taken in the 1930s. I wanted this work to be celebratory, honoring each member of the team equally. There is no hierarchy between the figures- they all take the same amount of space and one is not more important than the other. Yet they also form one strong, singular unit that creates a powerful, towering composition.

The Spell (2018) was actually based off a photo of Nadia Comaneci, who is a Romanian gymnast. I’m always fascinated by the gestures and body language in sports, and in gymnastics their hand movements seem like mysterious choreography. I felt like she was casting a spell, or performing some secret ritual. So here the subject is transformed into a more strange, cryptic figure by cloaking her in black fabric and smearing her face with red paint. I wanted to create a sense of uneasiness, while retaining her strength.

Meet 5 Japanese Collectors Who Are Putting Their Country’s Art Scene...

Unionized Workers at the Philadelphia Museum of Art Are Going on...

After nearly 50 years as the Arlington Arts Center, a non-profit space just across the river from DC is being reborn as the Museum of Contemporary Art Arlington