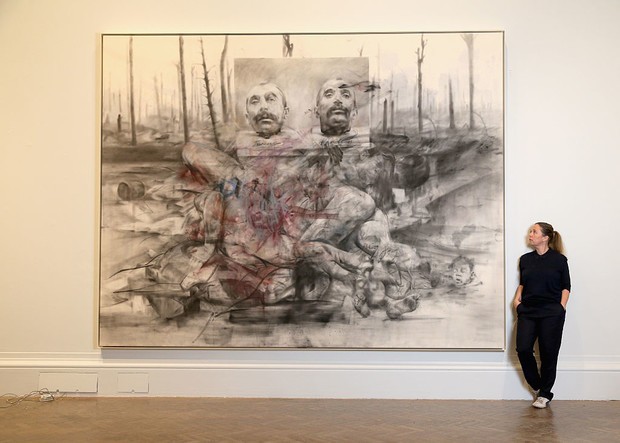 At an auction, Sotheby’s October 5, 2018, painting “Propped” by British artist Jenny Saville sold for a record $12.4 million. Thus, Saville became one of the most expensive artists of nowadays.

“Propped” is a self-portrait of Saville, created in 1992. It is made of oil on canvas measuring 213 by 183 centimeters. The artist used quotations from an essay by French feminist Luce Irigaray.

The painting was first presented at the Young British Artists Association exhibition in 1997. For a long time, the painting was owned by collector Charles Saatchi, who organized the first exhibition of the art group. The association also included Damien Hirst, Tracy Emin, Mark Queen, and several dozen other artists.

Saville is known for her monumental paintings depicting naked women and transgender people. “I want to be a painter of modern life, and modern bodies,” Saville told The Guardian. 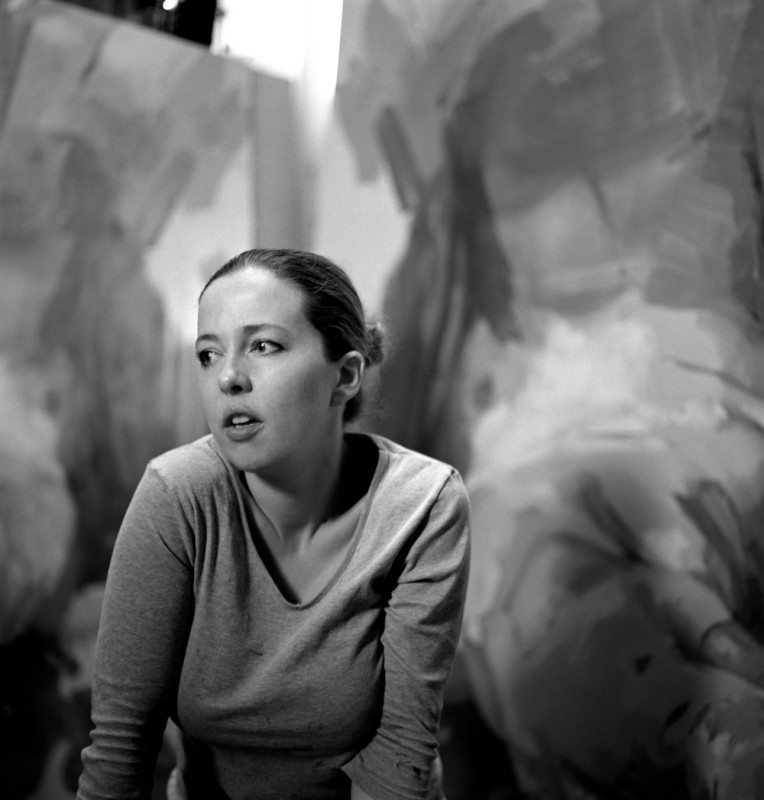 The way of becoming an artist

Jenny Saville was born on May 7, 1970, in Cambridge, UK. She studied at the Glasgow School of Art and then undertook a 6-month internship at the University of Cincinnati. In her own words, she saw “many big women there. Big white flesh in shorts and T-shirts”. Returning to England, she met Charles Saatchi, Britain’s leading art collector, who bought almost all of the artist’s existing works and offered her an 18-month contract, supporting her as she created new paintings currently on display at the Saatchi Gallery in London.

Belonging to the YBA

Jenny Saville did not attend Goldsmith College and did not participate in the first YBA exhibition “Freeze”, but since her paintings were in the private collection of Charles Saatchi, she participated in the exhibition “Sensation” in 1997. Her works are not exactly YBA specific, if only because they are examples of figurative painting.

Jenny Saville has devoted her career to traditional figurative oil painting. Her paintings are sometimes compared to those of Lucien Freud and Rubens. The bodies and objects in the paintings of this artist are usually much larger than the life-size ones. They are heavily pigmented and give a very sensual sense of skin surface and body weight.

Since her art debut in 1992, Saville has remained faithful to the themes of the female body. Sometimes you can also see animal carcasses in her paintings (“Torso 2”, for example). Already in the 21st century, she began to create images of transgender people. Among the published sketches and working materials of the artist, you can find photos of liposuction, victims of disasters, deformed bodies and bodies of transgender patients before, during, and after surgery.

What is Jenny Savill phenomenon?

Jenny Savill now lives and works in London. Known mostly for her monumental images of women. In 1994, the artist spent many hours watching plastic surgery in New York City. Savill does not conform to public perceptions of Young British Artists, as she dedicated her work to traditional figurative oil painting. Her picturesque style is compared to the manner of Lucien Freud, Rubens and Bacon. Among her contemporaries, the contemporary French expressionist painter Philippe Pasqua had a considerable influence.

The figures on her paintings are usually larger than their natural size. The layers of paint give a sensual sense of the skin surface and body weight. Saville sometimes adds markings on the body, such as white rings or red spots that look more like bruises. Her figures are grotesque, brutal, deformed and, in some respects, similar to caged animals. “I want to be an artist of modern life and modern bodies,” says Savill. The artist looks for and finds her heroes in everyday life – watching women in malls, patients being prepared for liposuction in hospitals, or teachers in high schools.

Since her debut in 1992, Saville’s attention has shifted from the female body to themes of the “undefined sex”. The artist paints large format pictures of transsexuals and transgender. Her published sketches and documents include photos of liposuctions, traumas, painful conditions and transsexuals.

“Naked art is what I love. Rembrandt, Velazquez, Titian. How do I paint a nipple? How do you convey a broken finger? I still enjoy it,” admits the artist. Saville doesn’t just work with oil paints. In 2016, an exhibition of her paintings was held. The artist noted that she felt more freedom when working with coal. “Due to the transparency of the drawing, it is possible to depict several bodies at once. This allows you to try to convey more realities in one drawing or change one gender to another,” Savile said.

Jenny Saville admits that she used to be more violent in her work.

And she was completely unattractive to portray beauty. Moreover, with her works, she sought to criticize social norms. The situation was changed by the fact that the artist had children. “They are so beautiful that I let beauty into my life,” Savile said. Now the artist and her family live in Oxford, arrives at her studio around eight in the morning and works for up to four pm.

Then she goes home to the children, and after putting them to bed, she goes back to the studio. The artist likes to work at night, and also to ride a bike around the city and look out the windows where she can see students and scientists in their offices and laboratories.

Jenny Saville is no stranger to working with fashion brands. In 2014, together with the designer Claire Waite Keller, who headed the Chloe brand at the time, she launched a series of shawls.

Jenny Saville admits that the definition of “female artist” is a bit annoying to her.

“Only when it’s gone into the past women will be part of the culture,” she says. Saville notes, however, that overall she has nothing to complain about. “I do exactly the job I want to do, I don’t compromise. A hundred years ago, I wouldn’t have shown my work. I wouldn’t even have been able to rent my own studio, because I wouldn’t have gotten a contract”.