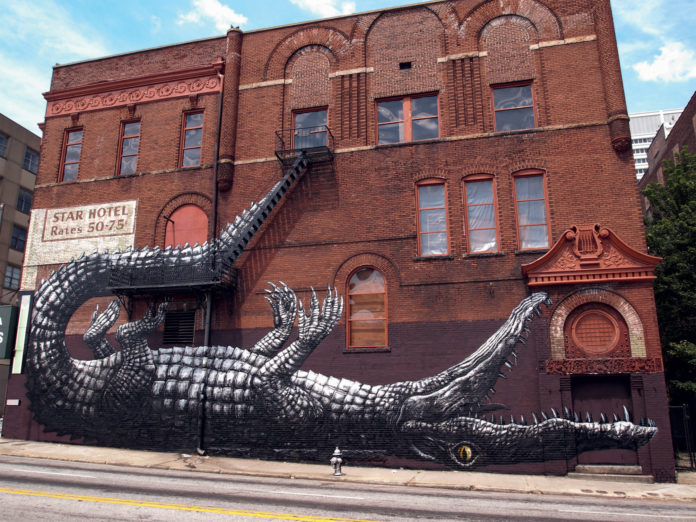 Those unable to experience the black-and-white murals of Belgian artist ROA in person can admire photographs of his works in the recently published Codex. Released by Lannoo Publishers, the 352-page book contains four chapters centered on Eurasia, Africa, America, and Oceania, regions where ROA’s depictions of local animals blanket building walls. The photographs portray a snake wound around itself, six different species perched on vertical ledges, and an alligator on its back with its tail scaling a fire escape.

ROA works directly on the building, foregoing sketches and projections, and uses the architecture to inform the ways he paints birds, rodents, and other native creatures. Captivated by anatomy, the artist attempts to animate his paintings, giving energy and life to species often disregarded by humans. “Exploration of nature, more specifically of the animal world, can lead to increased empathy,” he says. “It teaches you something substantial about how one should live a good life.” The monochromatic murals’ scale often makes animals larger than their real-life bodies, securing and emboldening their monumental presence.

An Anti-Smartphone With a Rotary Designed and Built by Space Engineer...