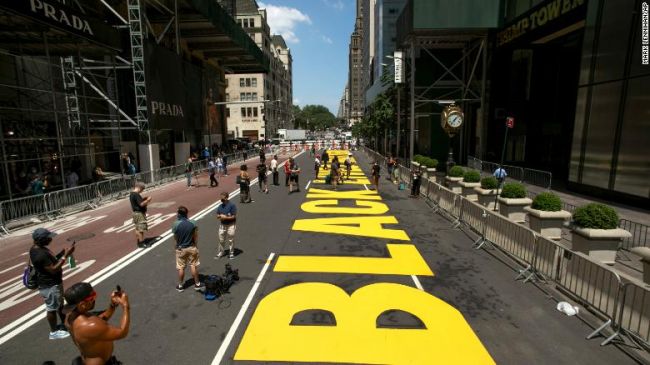 An African-American woman doused the Black Lives Matter sign in front of the Trump Tower skyscraper in New York. According to the authorities, two women were arrested near the sign for trying to pour paint on it.

The network got footage in which an African American smears black paint on an object. During the detention of the offenders, one of the police officers was injured. He slipped on the paint and fell, injuring his head and arm.

The police department notes that this is the third case when the paint is poured onto the inscription. So, before that, buckets of red and blue paint were poured onto it. Local media outlets regard such actions as an act of vandalism.

Earlier it was reported that the mayor of the city Bill de Blasio and his wife took part in the creation of the Black Lives Matter inscription in front of the Trump Tower skyscraper. A preacher Al Sharpton, one of the most famous fighters for the rights of blacks in the United States, took part in the action.

In June, Newsweek reported that Black Lives Matter (BLM) would appear in every borough of New York. The decision to hang the city came amid growing unrest and unrelenting protests.

According to New York Mayor Bill de Blasio, this will help to recognize the significance of the idea that the BLM slogan carries and which has been mistakenly rejected for most of American history – the idea of ​​combating all kinds of discrimination. 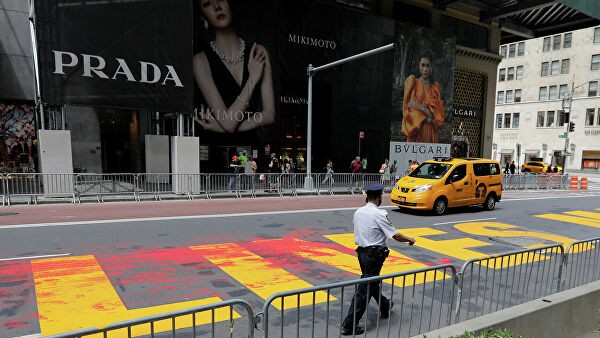 So when Manhattan officials decided to paint their own street mural at the Civic Center – an area adjacent to the ground that was the burial site of people of African descent in the 17th and 18th centuries – they knew they couldn’t ruin it.

The New York City Community Design Commission, which has jurisdiction over all buildings and art on offer on city property, slowed down the process and listened to the community. Justin Garett Moore is an executive director of the Public Design Commission. He said they took the time to talk to the people who were involved in the real Black Lives Matter movement.

The result is a 600-foot street mural that not only reads Black Lives Matter but also laid out the principles behind the movement. The project, led by the Office of Manhattan District President Gale A. Brewer and led by Black Lives Matter of Greater New York, was coordinated by color designers from WXY, an architecture and urban planning firm in New York.

According to Amina Hassen, employee and urban planner at WXY, named one of the most innovative Fast Company of 2019, getting it right is much more than just closing the street and handing out paint rollers.

To fit the movement’s broader message, she says how it was done and who participated in it is just as important as how it looked. After all, a street mural is what people remember because it is a material object that they will be a part of. But as co-authors, they knew that the process of creating the Black Lives Matter Mural in NYC was just as important.

Originally conceived in early June and slated for completion on June 19, the painting schedule quickly came into conflict with the painting policy. Hassen says the problem arose early on when practices were found in one of the companies selected to provide assistance that contradicted the movement’s anti-racist stance.

It was decided that in order for the project to move forward, all participants must agree on the idea of ​​the movement. This led to a lot of calls, says Moore. The city’s permission to close the streets for three days was delayed and a complete rethink of how to manage the project and who should be involved, adding weeks to the process.

But, according to Hassen, the delay was trivial compared to the message. She says that they decided it was actually more important to go and find an organization that has both the technical capacity to get it done on time and internal working methods that back up the statement they were trying to write.

Black Lives Matter tomorrow will have the same meaning as one month later, and if they rush to throw words to the ground with no intention in their process and their partners, they will go against what they are trying to say.

The street mural itself was completed on July 3. Each of the three words was created by a different artist – Sophia Dawson, Quiet Mohammed, and Patrice Payne – and painted on the street in collaboration with the local TATS CRU monumental artist and Thrive Collective, a youth non-profit organization.

All individuals and organizations involved were selected based on their commitment to the anti-racist principles of the Black Lives Matter movement and careful balance of gender, sexual orientation, and religious background.

He says the street mural was also technically and financially supported by mostly white architecture and design firms who understood they had a role, agency, and resources to amplify the voices of the Black Lives Matter movement.

It is important that such projects involve predominantly white areas such as architecture and urban planning, says WXY architectural designer Jordan Channer, who also helped coordinate the mural project. And this is especially true for what they do.

According to him, very often people who make decisions about what happens on the street or what building to build are not really aware of the problems faced by members of the community to which they take things outside. As far as the timing of this process is concerned, I definitely think it should take place in the broader context of the urban conversation.

Such a process could represent a new way to participate in the design of spaces within communities, Channer argues. This street mural could become the paradigm of urbanism in general. 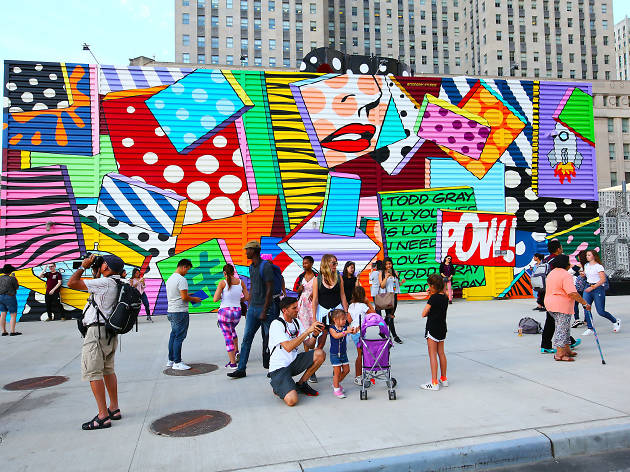 Everyone knows that NY is full of a wide variety of museums and art galleries. Art is so widespread here that you can find paintings not only in galleries but also on the streets of the city.

In New York, nearly every street is a place of famous graffiti. Moreover, most of them fit so succinctly into the design and atmosphere of the street that they become part of them. Street art was born in New York back in the 70s when the city suffered from bankruptcy and increased crime.

Young talented artists simply did not find another place to express their thoughts and feelings. Street art was also popular with activists who had something to say to the mayor’s office and the state. Here are the famous murals of NYC. 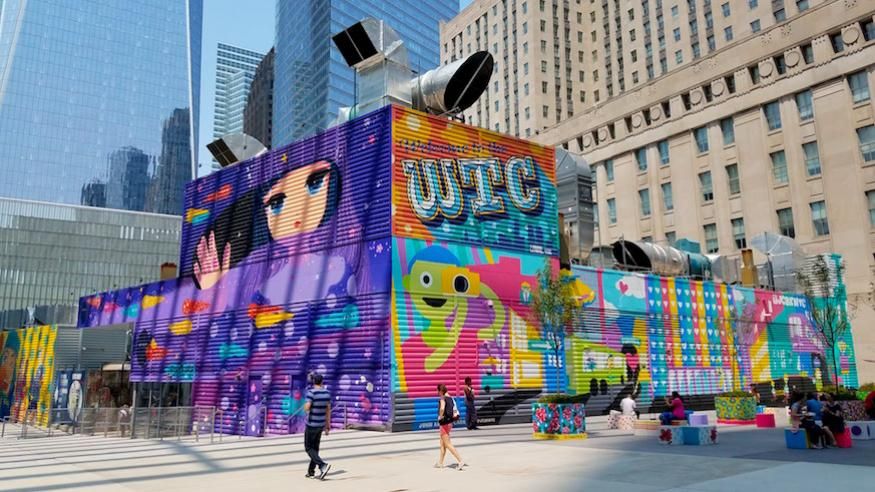 Artists Todd Gray, Hektad, BoogieRez, Stickymonger, and husband and wife Chinon Maria and Sebastian Miter painted bright graffiti in the style of pop art and anime, bringing the boring financial district to life with vibrant colors. The street mural is right next to the World Trade Center tower – World Trade Center on metal coverings that cover the foundation of the next future skyscraper 2 World Trade Center. 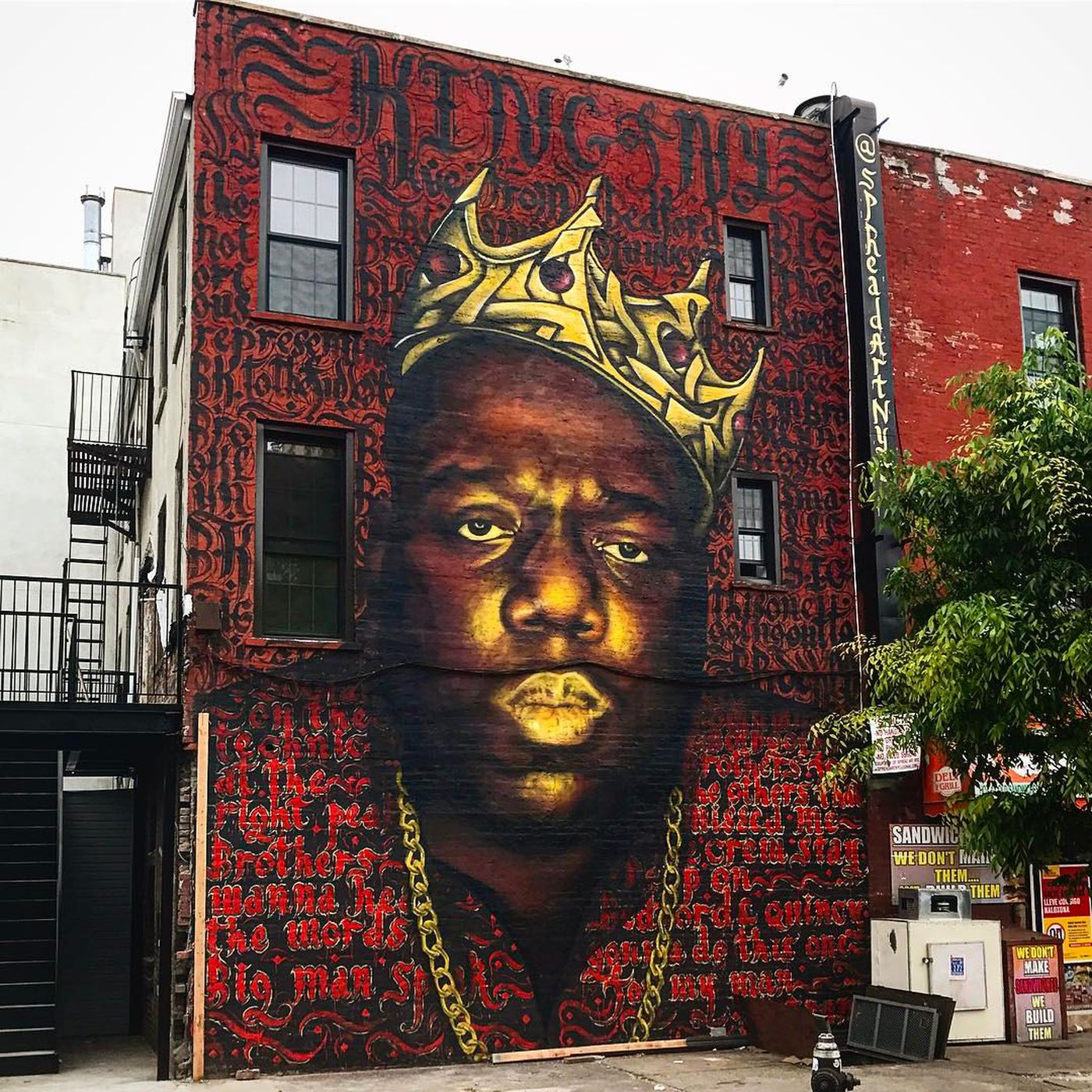 The next flamboyant street mural is at Bedford Ave and Quincy St in Brooklyn. Based on a famous portrait photograph taken by New York photographer Barron Claiborne, this three-story graffiti depicting Notorious B.I.G. – the famous American rapper, is the largest dedicated to the deceased rappers of America. 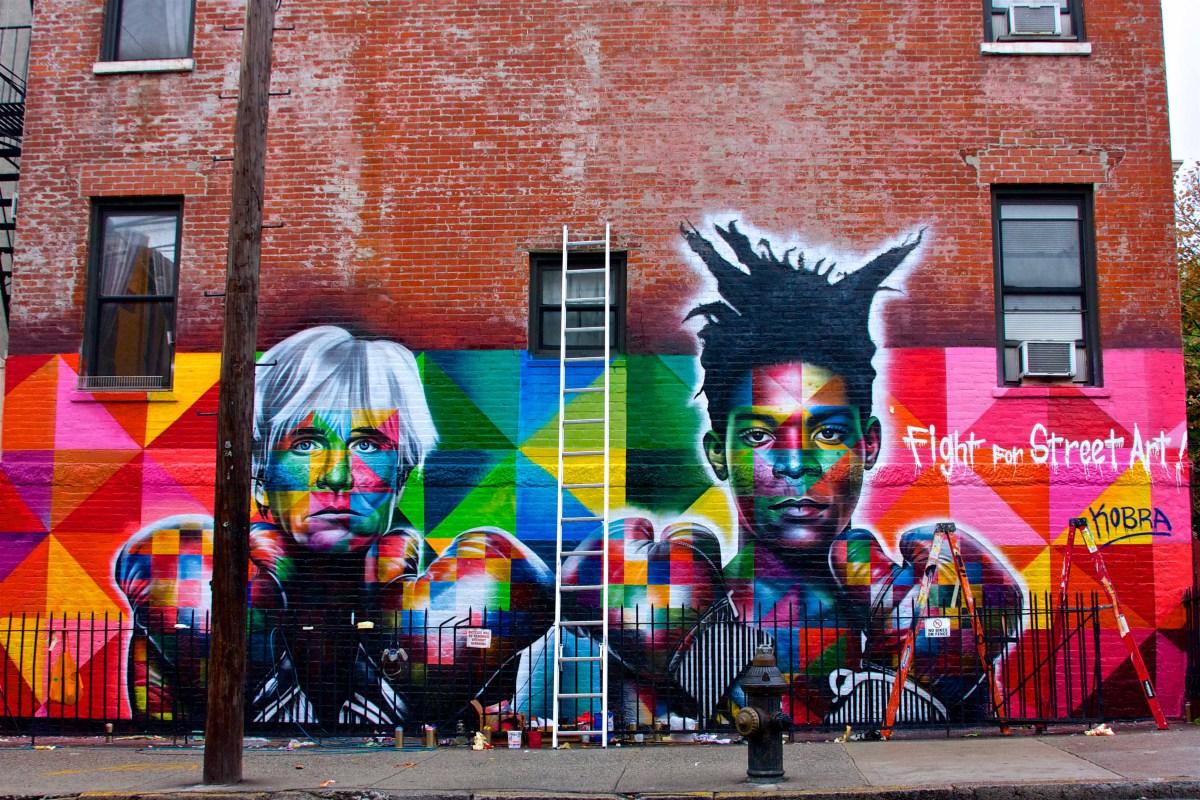 A famous street artist from Brazil throughout New York Eduardo Cobra became famous for his kaleidoscopic graffiti with portraits of famous people. The artist’s works are scattered throughout the city, but this particular street mural is a tribute to two artists, Andy Warhol and Jean-Michel Basquiat. 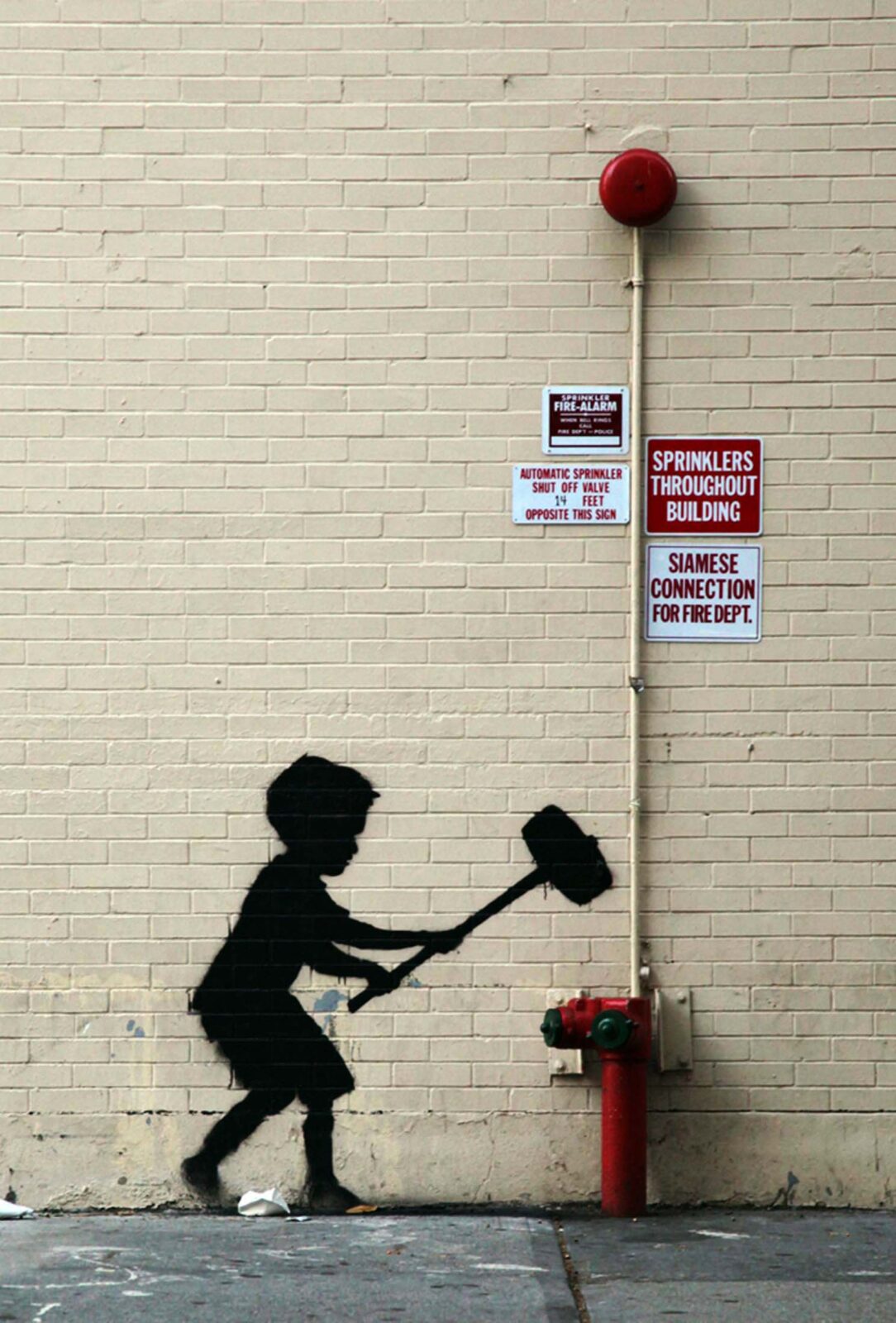 A simple beige brick wall in the heart of the Upper West Side in Manhattan features Hammer Boy. This street mural is one of the creations of street style artist Banksy. It is very unusual to see a drawing on the wall of such a wealthy area in Manhattan, however, the work of this artist can hardly be called street art but rather works of modern art.

The tallest mural in New York 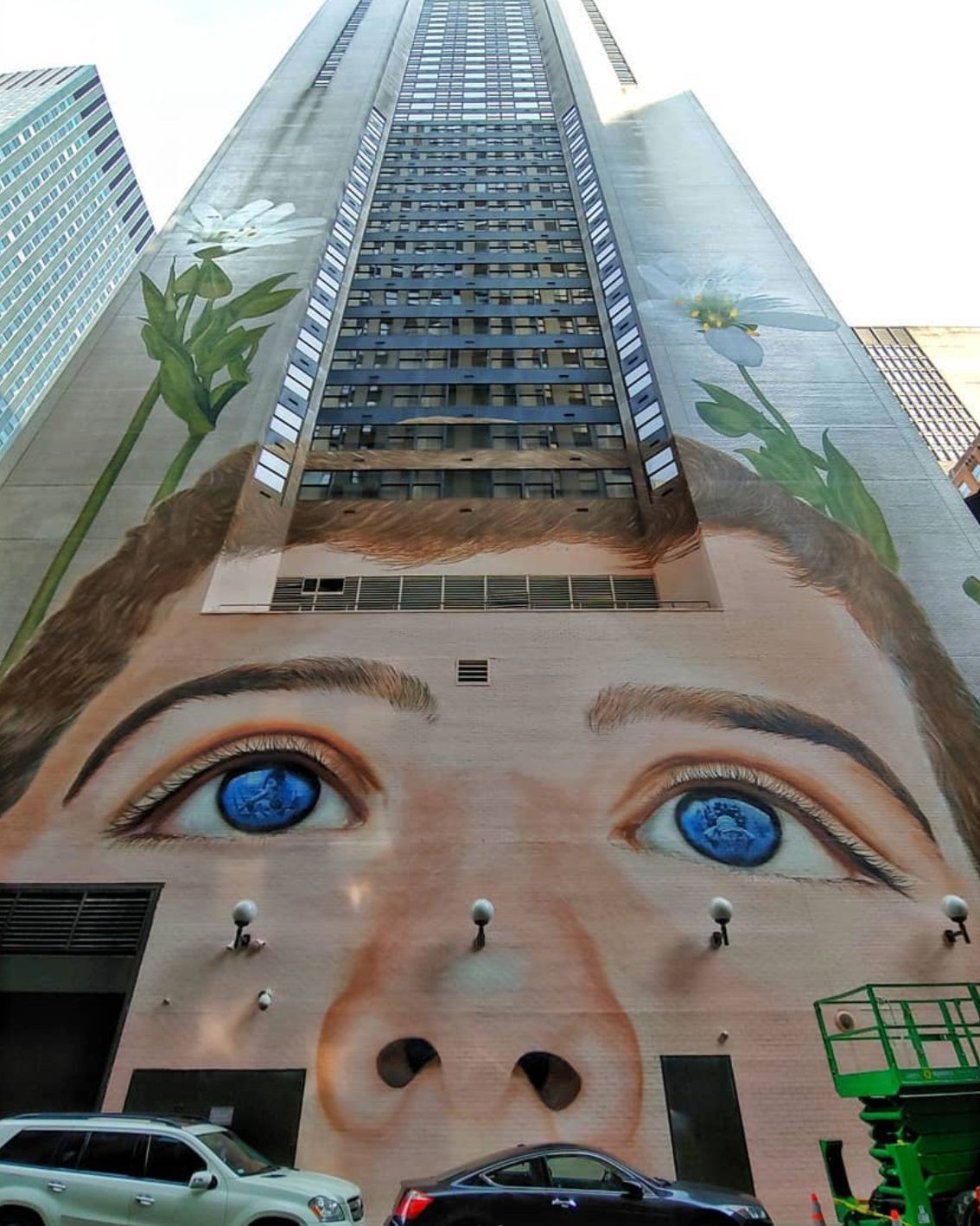 American artist Jorge Rodríguez Gerada has created the tallest street mural in New York. The drawing was located in the city center on the wall of the Westin Hotel Grand Central. The artist dedicated his creation to the fight against child labor and child trafficking.

The huge street mural depicts two tall flowers – they rise as much as 13 floors. And in the middle, between them, is there is the face of a little boy whose eyes are pictures of children rescued from child labor camps. According to the author, this street mural is intended to condemn child labor and combat modern slavery.

The main idea of ​​my work is that children should have a childhood filled with games and the care of loved ones, but this, unfortunately, is sometimes not at all the case.

The street mural is part of a series of five drawings created by internationally renowned artists for the Art Walk project in Midtown Manhattan. Graffiti marks the centenary of the founding of the International Labor Organization.

In addition, they reflect the key themes of the organization’s efforts to achieve decent work for all. Also, street murals are meant to inspire each of us to create better work in the future. In total, five murals were drawn on the themes: green jobs, youth employment, gender equality at work, child labor, and forced labor.