Home Art NYC’s new Black Lives Matter Mural – Why It Is More Than... 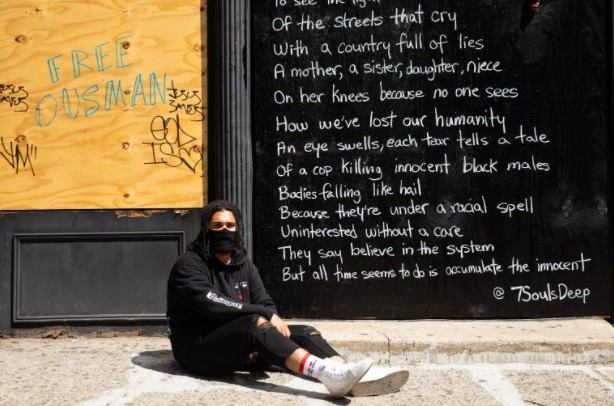 First, boards covered businesses in New York and Oakland. Then, so did art. Graffiti artists, muralists, and others, including artists who’d never before put up large-scale works — famous and not — used the boards as blank canvases. Memorials to George Floyd and Breonna Taylor, as well as others who were killed by police, graced many walls; another way of saying Black Lives Matter. Other art included calls to defund the police, poems, and expressions of all kinds. Some neighborhoods became ersatz outdoor galleries, often empty of the usual crowds, unless protesters passed through.

The Verge’s staff was impressed by the art, so a couple photographers took pictures of the works. Where possible, we’ve credited the artists. We’ve also talked to a few of them to get their perspective on their art. In some cases, we didn’t hear back from artists before publish, so we have only included their Instagram handle. If you recognize the art, and we don’t have the artist’s name, please contact us! We want to make sure everyone gets credit for their work.

Above, Gaia WXYZ’s mural Black Girls Deserve Better. As Gaia was painting the base coat on her mural in downtown Oakland, she wasn’t quite sure what the end product was going to look like. But all that changed very quickly as a passerby tapped her leg and said, “Do you need any help, sexy?“

Gaia told him that touching people without consent isn’t something he should do. That particular incident just reminded Gaia of all the times she was disrespected as a girl. “Growing up in Florida, men would sexualize me and objectify me. I wish that Black girls today could live and be girls. I wanted to channel that frustration into a message that could uplift,” she said over Instagram. Instagram: @gaiaw.xyz

It’s Murder painted by Liliana Rivera “was inspired by the anger I felt towards people trying to justify what is happening to black people, I wanted to simplify that truth – it’s murder. That’s what’s happening, law enforcement doesn’t have the right to murder people” she said over Instagram.

Liliana Rivera stands for a portrait in front of her piece called Dominique Alexander, named after the man who was found hanging in Fort Tryon Park. His death was declared a suicide. In a message over Instagram she wrote, ”I never thought I would hear of a man being lynched on a tree in NYC, to me that’s something that always happened in the south or in middle America. For something like that to happen in our own backyard was really disheartening, and literally in people’s backyards at home.” Instagram: @lilianariveradesigns

Left, Fabio Esteban Amador commented about his piece Hope (Esperanza) by Instagram message: “The power of the image in times of uncertainty becomes the impetus for change in our society.” Instagram: @fabioesteban. Right, artist(s) unknown.

Mural artist Lola Lovenotes writes about her mural commemorating Breonna Taylor, who “was murdered over 3 months ago by police officers and they still have not been charged,” she said in a message over Instagram. “There have been countless racial injustices against Black women, girls, [transwomen + girls], and yet their names are forgotten. Their murders don’t seem to get the same attention as Black men and boys. When we say Black Lives Matter, we need to make sure Black women are included in our demands for justice too!” (The brackets are hers.) Instagram: @lovenotes.

Left, mural by @sotethegoat @art_stocks. Right, mural of Ida B. Wells by @maevecahill who explains her inspiration for the piece via Instagram message: “Ida B Wells once said ‘There is no educator like the press,’ which became the catalyst for my train of thought regarding the lack of truth in the media we experience and consider educational in the 21st Century. The press is the quintessential example of how easily stories can continue to be spun and history can continue be erased, especially in regards to Black history. With this I pose the question…Is Truth Dead?”

Artist Konstance Patton poses for a portrait in front of her unfinished mural, Kendra. “My inspirations for the Kendra mural was peace, beauty, diversity and being seen” She wrote in an email. This painting is part of Patton’s ongoing Goddezz Projekt that encompasses works produced around the world and in different mediums. The goal of the series “is to create art works that are beautiful and dynamic, while they also reflect the diversity of the women in America. I love when people just stop, take a breath and smile with the art during this fast changing historic moment. Finally art is back in Soho. I am proud to contribute. Artists are essential, we are creating moments of peace, and we are finally being seen.” See the finished piece here. Instagram: @konartstudio

A mural by Konstance Patton on a boarded-up storefront on Broadway in Soho. Instagram: @konartstudio

In a message over Instagram Amir Diop gives insight into a large scale mural he painted on Broadway in Soho. “The meaning of we make all your shit is the fact that African Americans make all these things to make profit for big business. The fact that we still don’t get justice for the men and women we lose is absurd. So I use my imagination to create a unrealistic looking painting and make it talk about very real topics.” Instagram: @amir.diop99

Left, Amir Diop’s 400 Years “represents that throughout America history people didn’t think about what black people go through in America. America continues to fail us and it took us being locked down in the house from corona for 3 months to say enough is enough and things need to change.” Instagram: @amir.diop99. Right, piece by @melvinqphysique.

Left, piece by @ronhaywoodjones. Right, street artist Sacsix’s piece on a boarded-up storefront is the backdrop to empty cafe tables which mark the first day of “phase 2” in the reopening of New York’s economy since the shutdown from the COVID-19 pandemic. Instagram: @sacsix.

Artist Nick C. Kirk writes, “I’ve recently been working on pieces surrounding unnecessary police brutality. The piece on Broadway, let’s just call it ‘Demilitarize The Police,’ with several VIP riot gear figures was a single figure piece I made back when Trump was elected. I felt that he fought the people versus working with the people. Sad how even more true this piece has become since 2016. The figure is called ‘VIP Citizen Trump,’ standing proud in his presidential riot gear. ‘VIP’ references quite a few things including how he sees the USofA in comparison to other countries, the southern Mexico ‘Great Wall,’ how he handles government and it’s officials, etc. While protesting day and night, I’ve observed first hand the unnecessary force used by the New York City Police on peaceful protestors.”

“It’s sad and sickening to see the local police act the way they do. They are obviously trained to behave this way. They should be taught to open dialogue instead of not caring and respond only with physical force. The tactics and weaponry they use at will need to be discarded and set in place a new standard. They do not feel like they are part of society, rather against it and that needs to change.” Instagram: @nickckirk.

Kalima poses for a portrait in front of What is the price of our life. “This piece was actually written in 2016 because of the murder of Philando Castile which is why this piece is so important,” Kalima says in an email. “It allows you to see that nothing has changed, and that instead racism, law enforcement, our judicial system has shown it’s true colors into their intentions and unwillingness to do what’s right by black people.“ Instagram: @7soulsdeep.

Left, piece by Moving on earth (Moe) writes via Instagram message about his work: “I feel that at the end of the day we are all human beings. And it saddens me deep down inside that Black people have been murdered. Choked, shot and recently hung from trees. If I can help by asking questions through my art I feel like it’s my duty.” Instagram: @itsthatfuckingfaceagain. Right, artist(s) unknown, NYC.

Left image: New York is Closed Until Justice is Real by @tylerivesnyc, and piece to the right by @saralynne.leo. Right image: unfinished piece by @jessekreuzer, see the completed work here.

Left panel painted by Shaina Eve Cintron, who said over Instagram message, “She is the mother to all lost children and the guidance we needed in this time. She is the protector of us all. She is Yemaya.” Instagram: @bl_a_nk_doe2.0. Gil Scott-Heron muralist, right, unknown.

After finishing a mural of George Floyd on Broadway in downtown Oakland, Matt Hunter started painting his second one when The Verge caught up with him. This time, he decided to paint a mural of Breonna Taylor. It took him about three days to finish this monochromatic piece of Taylor depicted as “a new monument for a new future,” he said. “I feel as though there is a cycle of things and we are at a boiling point of ignored pain.”

Later, Hunter sent photos of the finished piece. Taylor is now surrounded by thousands of people behind her, which he says represent an unstoppable movement to create change and bring justice to all people. The Moon and Sun on each side of her are a reminder that the Earth keeps turning. “Things move towards evolution, however slowly,” he said. “Evolution of the spirit. Evolution of justice.” Instagram: @matthuntering. 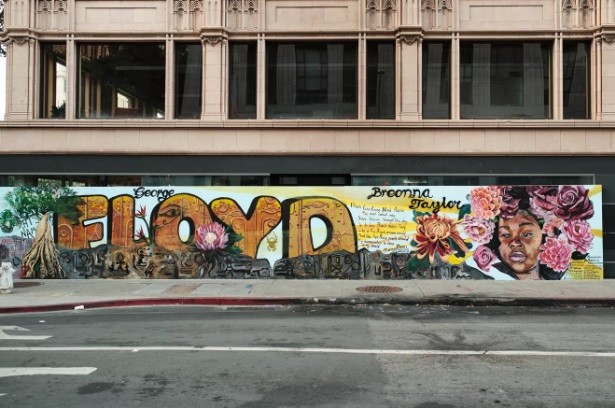 Shara Shimabukuro, a UX and product designer by trade, got into painting about three years ago. Above is her first mural ever. The sheer size of it felt daunting at first, she says. Shimabukuro’s idea with the mural was to give residents of Oakland something that offered hope and inspiration. Through consultation with her friend, a Bay Area native, she decided Gianna Floyd’s quote from a now-famous video would do just that. “The color kind of came together afterwards. I just started elements here and there and that’s how it turned out,” she said.

Shimabukuro, who spent the last five years in the Bay Area, is currently in the process of moving to Tulsa. She wanted to contribute something to the city of Oakland before she moves.

Artist Matthew Mazur told The Verge in an Instagram message “Angela Davis is a living legend that has personally moved me to wake up and fight for the social injustices I have ignored for far too long.” This tribute to Davis is on Wooster Street in Soho, New York City.