Home Art School of the Art Institute of Chicago a leader in educating the... 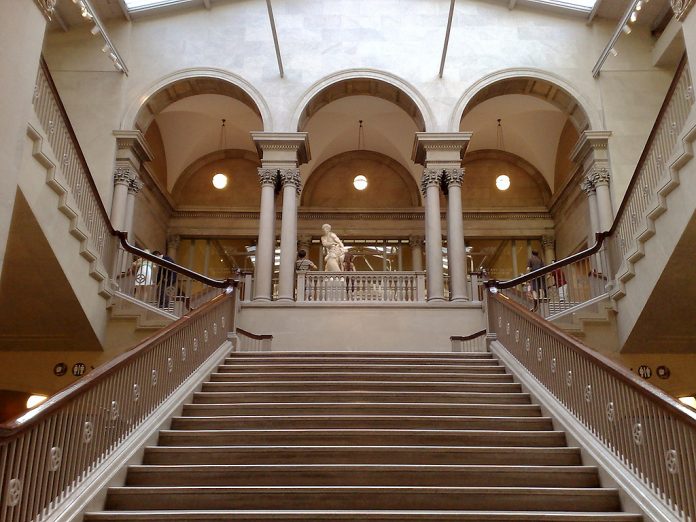 In the U.S. you can find institutions for art education, where you can learn painting, sculpture, film production, clothing design, interior design, etc. The main difference between art education in the U.S. from many other countries is the desire to apply all knowledge in practice. At such schools and universities in the United States, teachers encourage students in every way and thus help them reach their potential and develop as creative individuals.

In the United States, funding for art education comes at three levels: local, state, and federal. The entire art education system is under government control. Students who wish to pursue an arts education can find both undergraduate and graduate programs. Most institutions that offer such programs are specialized art schools or universities with an art department.

The arts are a very broad field of education that includes visual arts, stage art, music, and other fields. Educational institutions represented offer programs at various levels and are highly regarded in the United States.

The School of Art Institute of Chicago 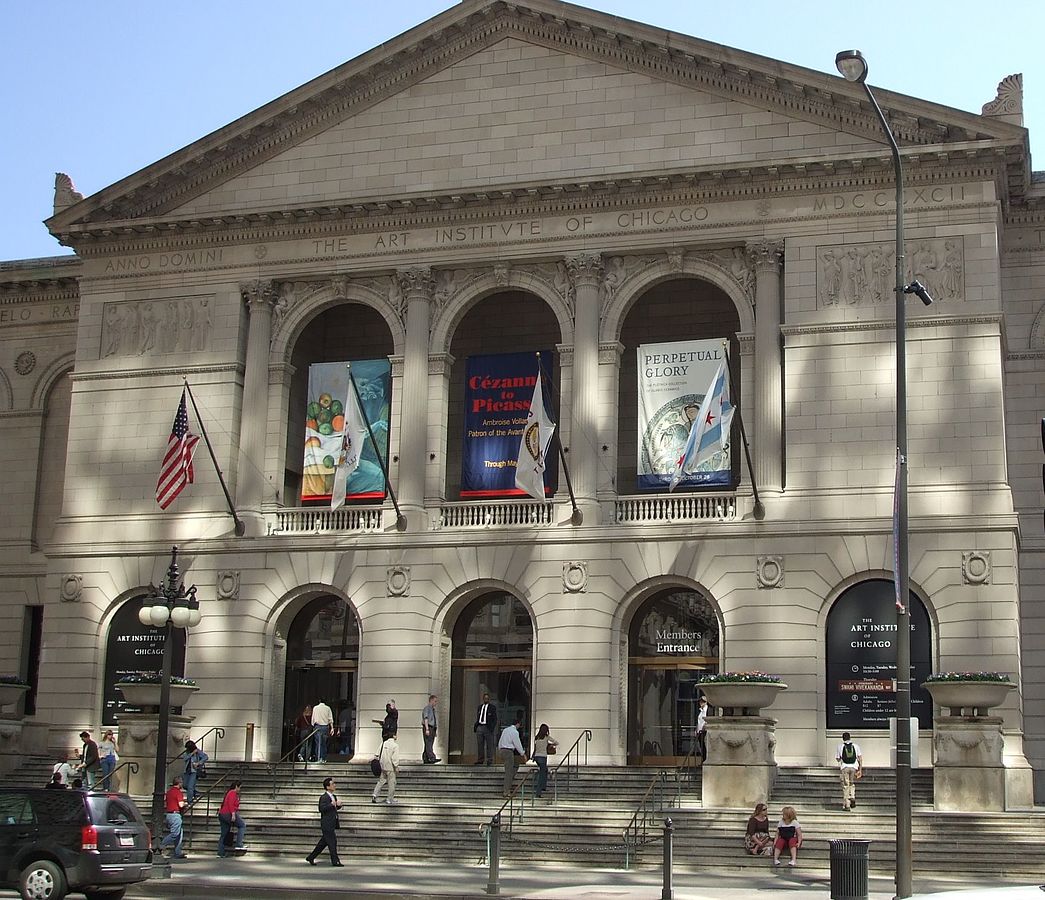 Even with a promising admission rate of 59%, hospitalizations at the School of Art Institute of Chicago are not very competitive. Students must submit, along with materials such as transcripts and test results, an art portfolio, and an artist’s application. For more detailed information about these requirements, as well as other necessary information, do not forget to visit the school’s website. 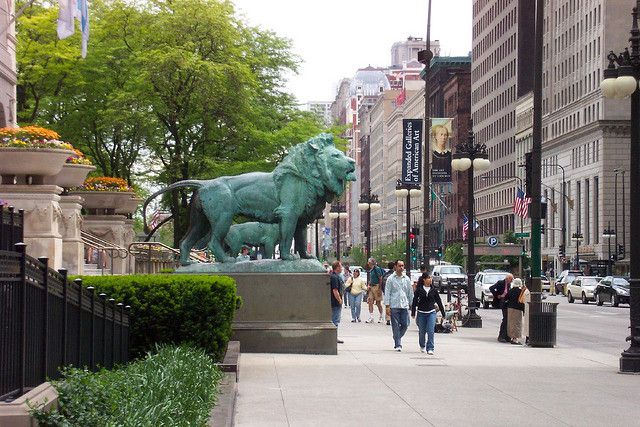 The School of Art at the Chicago Institute was founded by a group of artists as the Chicago Academy of Design in 1866. In 1893, the school moved to its current address on Michigan Avenue in Chicago. The school trains 2,935 students and offers bachelor’s and master’s degrees. The institution consists of the Department of Further Education and Special Programs, the Summer Department, Early College, and the Department of Educational Programs. Programs are offered in visual and critical sciences, fine arts, interior architecture, creative education, art history, and more.

Categories that can be studied at the School of The Art Institute of Chicago:

The Art Institute of Chicago 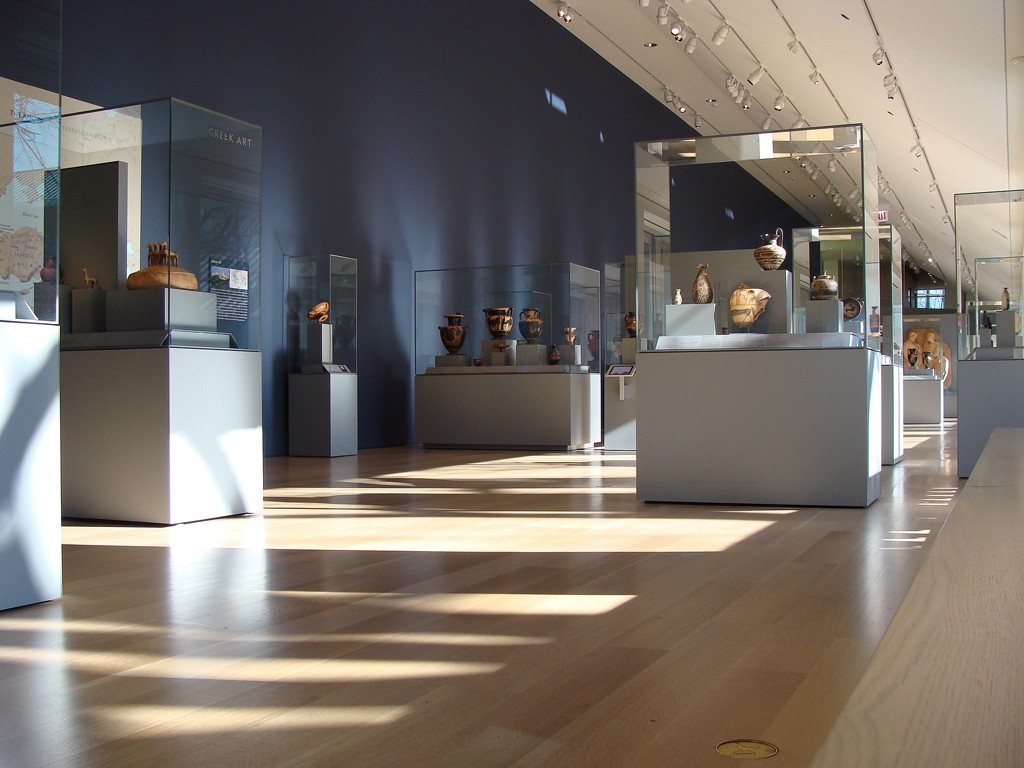 The Art Institute of Chicago is the largest art collection in the United States. Like many U.S. museums, was formed by gifts and donations of individual citizens, more than 90 percent of paintings were donated by Chicago collectors. Today, the most popular part of the collection is paintings by French impressionists and post-Impressionists.
The museum was opened in the winter of 1893. Chicago Art Institute is located in a huge building on the eastern side of Michigan Avenue. Its strict and elegant facade faces the skyscrapers with metal frame, built by the architects of the so-called Chicago School after the fire of 1871.

The construction project was owned by the Boston-based architectural firm Shepley, Rutan, and Coolidge, and part of the funds for its implementation was released by the World’s Fair, which hosted one of its pavilions. After the closing of the World Exhibition, starting from 1893, the building was completed and extended more than 15 times. 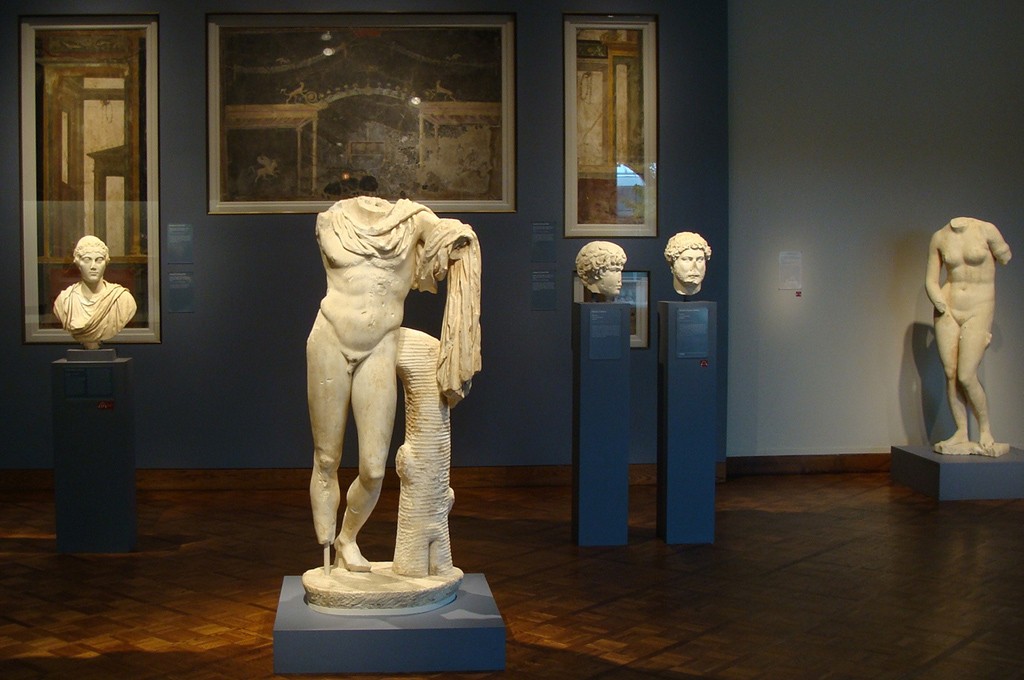 The original collection of the museum consisted of copies of paintings, sculpture, and architecture, located in Europe. On the first floor, there were halls of plaster casts of works of art of antiquity and Renaissance, rooms of curators, and a lecture hall. Above the floor, there was a gallery enfilade, designed for pictorial copies and original works, received from private collections for a temporary exhibition.

In the very first hall was exhibited a collection of paintings of the 19th century, owned by Henry Field, which in 1894 was donated to the Art Institute. Field’s collection included masterpieces by J.F.Millais, C.Corot, S.Dobigny, E.Delacroix, J.Dupré, N.Diaz de la Peña, and T.Russo. 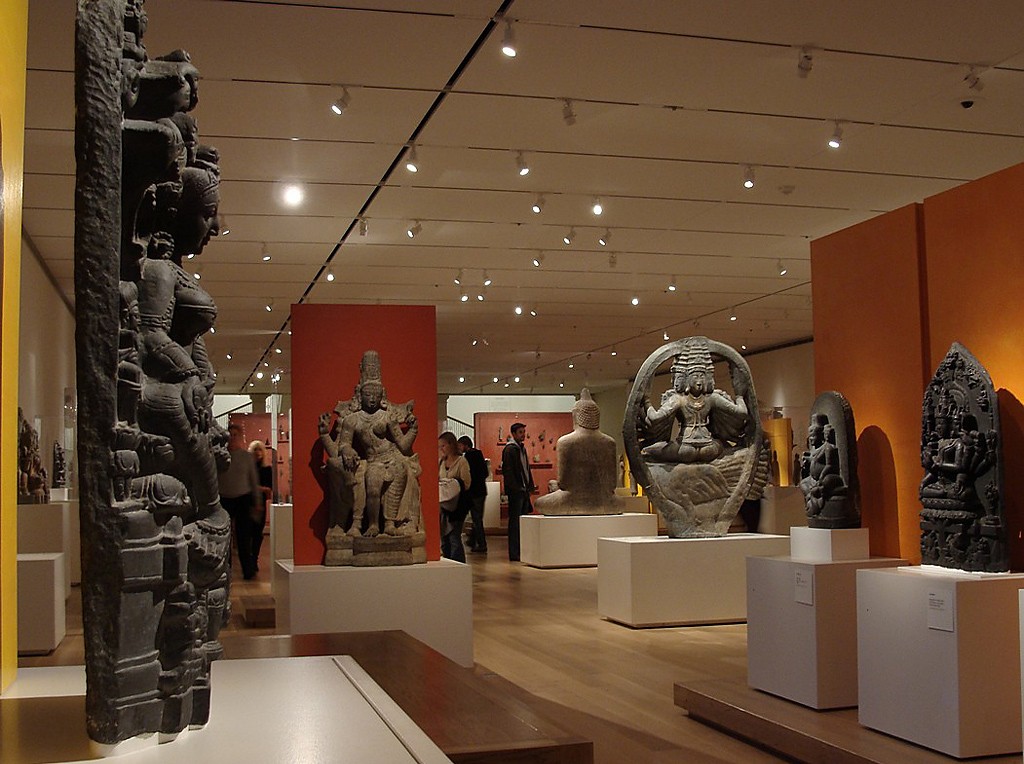 In the same years, the museum owns 15 paintings by Dutch artists of the 17th century: back in 1892, in Florence, two future members of the Board of Trustees of the Chicago Museum – Charles Hutchison, the first chairman of the Board, and Martin Ryerson, bought with their own money paintings from the Demidov’s collection, among which were paintings by Rembrandt, J. Roisdal, F. Hals, J. Wall. These works, purchased especially for the museum (the funds spent by Hutchison and Ryerson were later reimbursed by the city’s residents), laid the foundation for the collection of originals.

In addition, Hutchison, Ryerson, and Manger provided their personal collections for the opening of the Art Institute for temporary display. 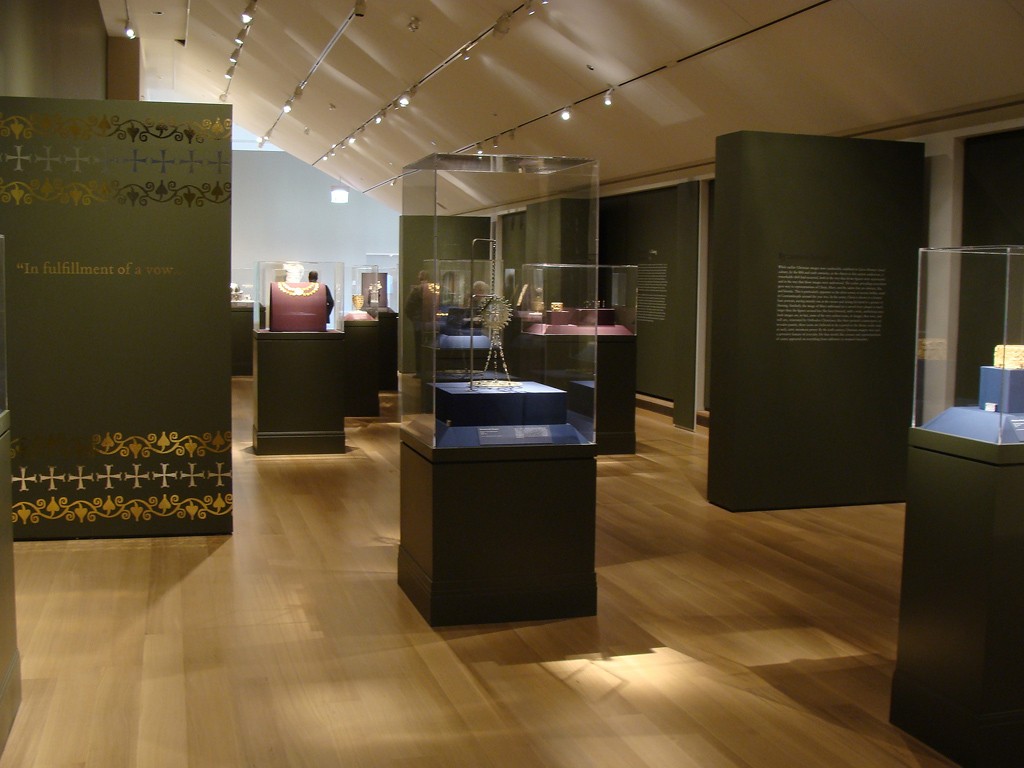 It took a long enough time for the permanent collection to become extensive and diverse, corresponding to the impressive architecture of the museum.

M. Ryerson died in 1933, and at the same time, the Institute received by will his entire collection of paintings, furniture, fabrics, graphics, porcelain, works of oriental art, part of which was in temporary storage at the Art Institute. Ryerson’s interests in the painting were very broad. From his collection come Scenes from the life of John the Baptist Giovanni di Paolo, the Gulf in the P.Cezanne Escarpment, Why are you angry? P.Gauguin. 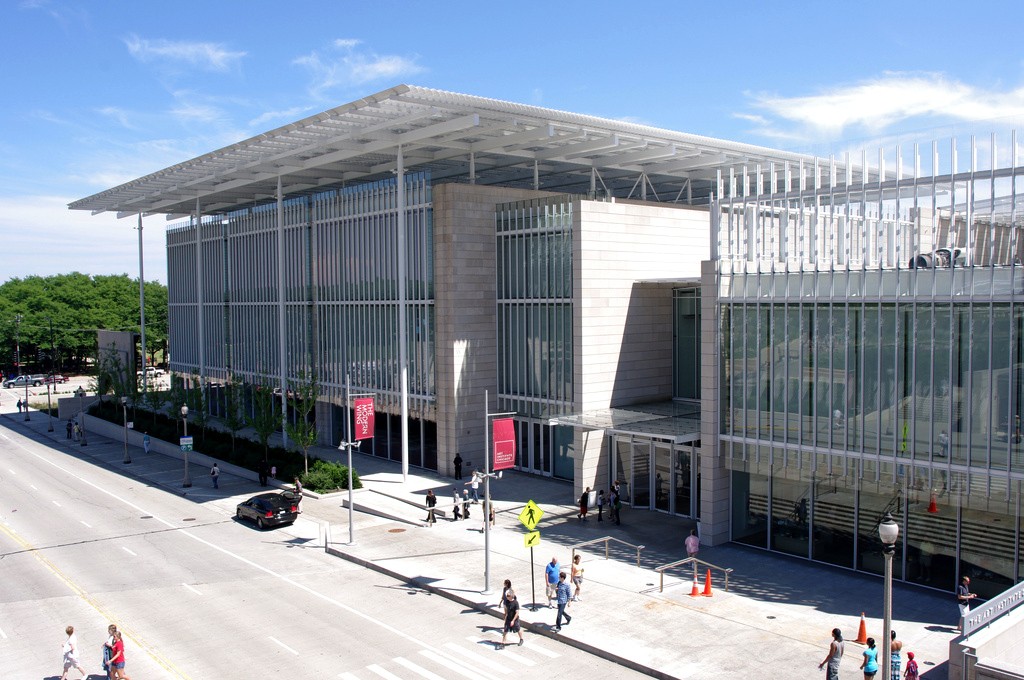 The Art Institute became one of the leading museums of the world in 1922 when it acquired the paintings from the collection of Berta Honoré Palmer. The Palmer collection was originally housed in an art gallery, which was attached to their mansion on Lake Shore Drive in 1884-1885.

Potter Palmer and his wife Bertha Honoré started the collection with paintings by Barbizonians, including C. Corot; then their collection was enriched with several paintings by E. Delacroix.

C. Corot. In the 1890s, Mrs. Palmer became the most prominent Impressionist collector in America: she possessed 40 paintings by Claude Monet, including from the series “The Stog”, “The Poplar”, “The Cathedral of Rwanda”, “Morning on the Seine”. She had excellent works by E. Manet, O. Renoir, A. Sisley, and C. Pissarro. Among the favorite paintings of the collector was a canvas by Young Circus Girls in the Fernando P.O. Renoir Circus. In 1895, Ms. Palmer stopped buying the works of the Impressionists and became interested in Oriental art. After her death in 1916, the collection was divided between the Art Institute and her successors. 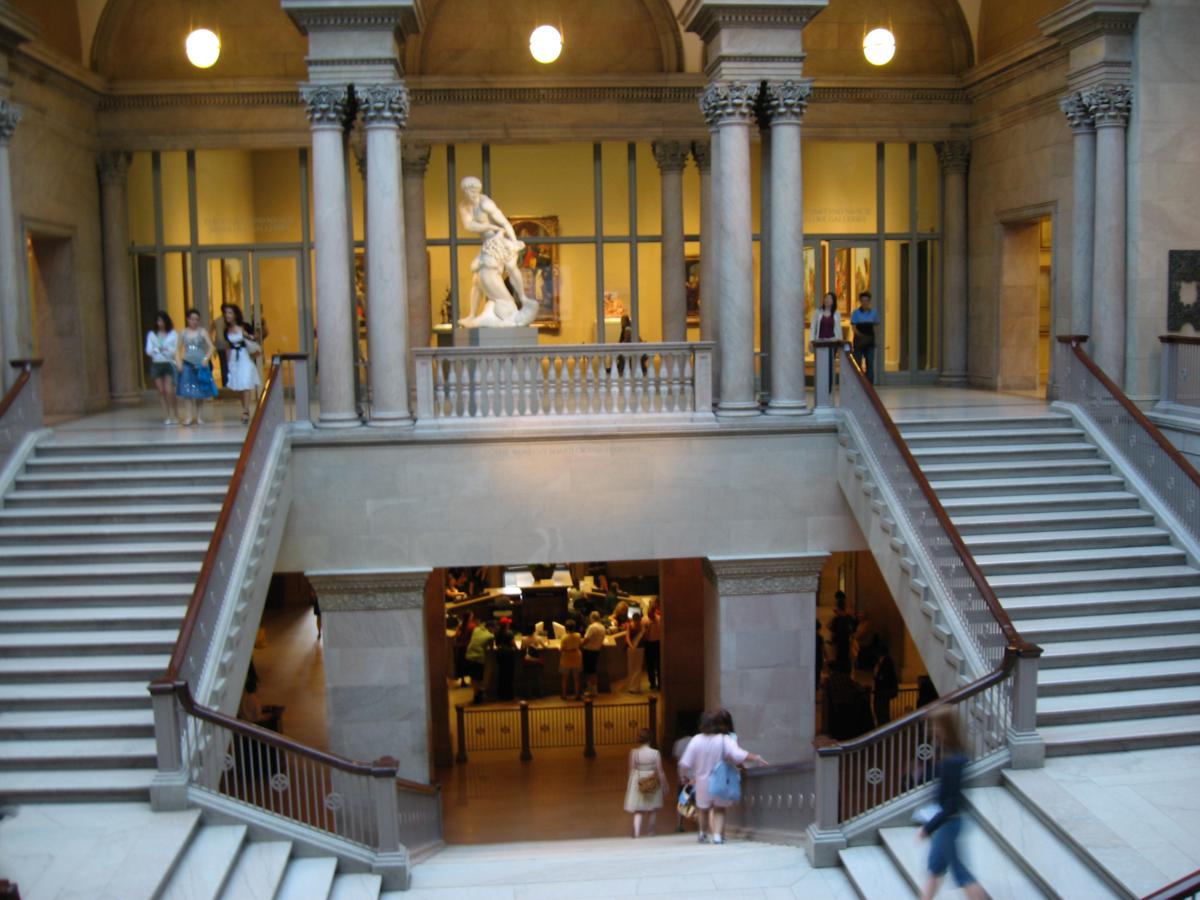 The collectors of the 1920s completed their collections, taking into account the fact that they would then add to Chicago’s museums. Annie Swan Corbun collected paintings by the Impressionists and Post-Impressionists. After her death in 1933, the collection was divided between her two favorite museums: the Art Institute of Chicago and the Fogg Art Gallery at Harvard University.

Chicago collectors Frederick Clay Bartlett and his wife Helen Burch during their stay in Europe in the 1920s bought paintings by A. Derena, T. Russo, A. Matisse, A. Modigliani, and P. Picasso. In 1924, the spouses bought for $ 24 thousand painting by Georges Sère Sunday Day on the island of Grand Jutt, which belonged to Lucy Coustarier. This painting later on. 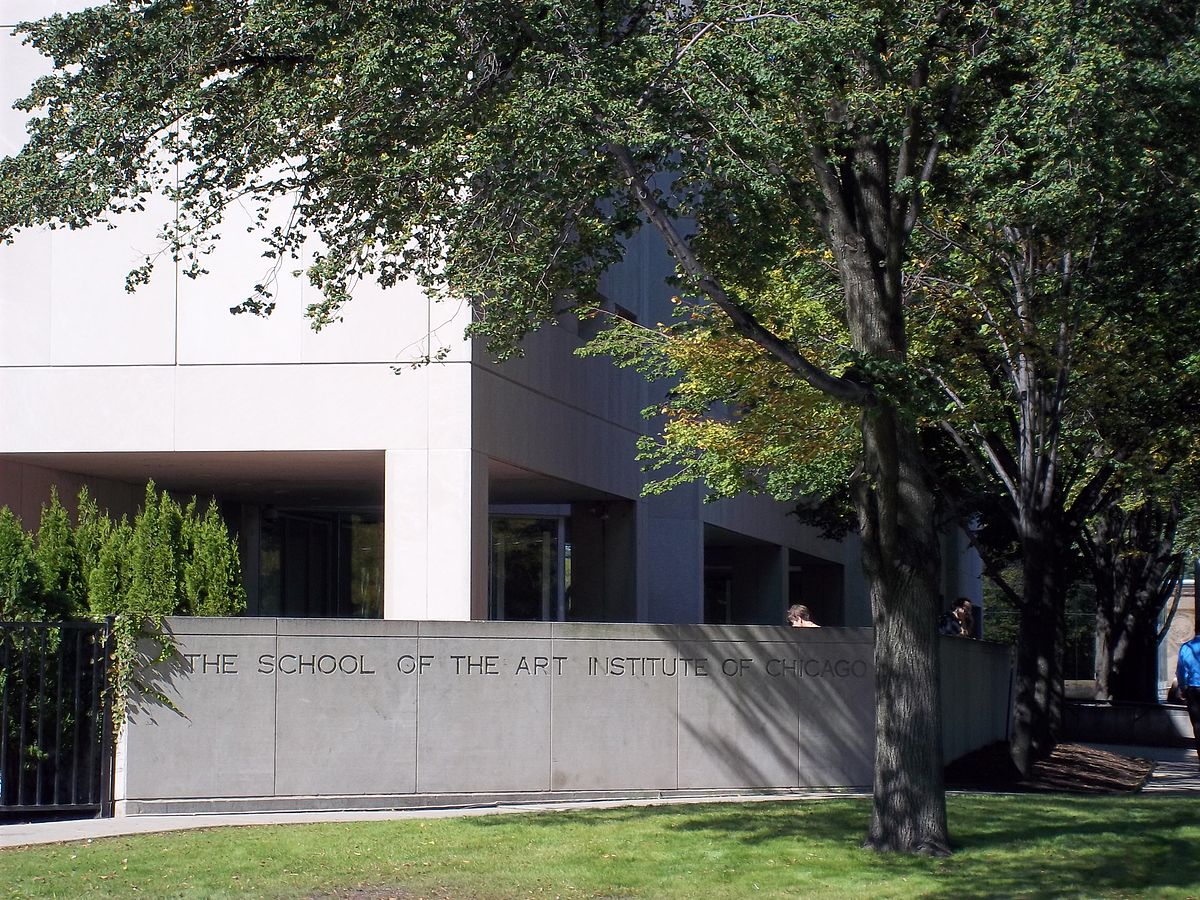 In 1926 Helen Burch died, and in her memory Bartlett presented his collection to the Art Institute. For his gift, Bartlett chose a large gallery in the museum, which originally exhibited works of old masters from the Demidov collection. The gallery was painted with white paint, removing everything superfluous from it, and the paintings were inserted into white frames. When the gallery opened in 1927, two years earlier than the New York Museum of Modern Art, it was the only place in the U.S. where you could see the works of P. Picasso, A. Matisse, J. Sear, P. Gauguin and F. Hodler. Helen Burch Bartlett Gallery became the most important gallery of modern art in America.

From 1927 until his death in 1957, Bartlett continued to collect paintings by French artists in the period from 1886 to 1914. These later acquisitions were also donated to the Art Institute.

There were other donations, among which are the collections of Manger, Kimbell and Worcester, each of which gave the museum several significant works of French painting of the 19th century and earlier periods of European and American art.

After World War II, the heirs of Bertha Palmer – the Wood and Searles families – made several significant additions to the collection of the Impressionists and Postimpressionists.

The Art Institute of Chicago continues to add to its collections, and its stores and exhibition space are constantly being modernized.

From the famous bronze lions that elegantly adorn the exterior facade to the hundreds of thousands of works of art from different centuries that hang on the walls of this vast gallery, the Art Institute is a gem of Chicago, both inside and out.

The exterior of the Art Institute of Chicago has always attracted amateurs to be photographed against the background of the sights. The two giant lions that greet visitors at the entrance to the museum were designed and created by sculptor Edward L. Campos in 1894, and today, as more than a century ago, attract many visitors.

The Institute of Arts was founded by a group of American artists in 1879, both as a school (Academy of Design of Chicago) and as a museum. The building in which it was originally housed was, in fact, built on the debris of the Great Chicago Fire. 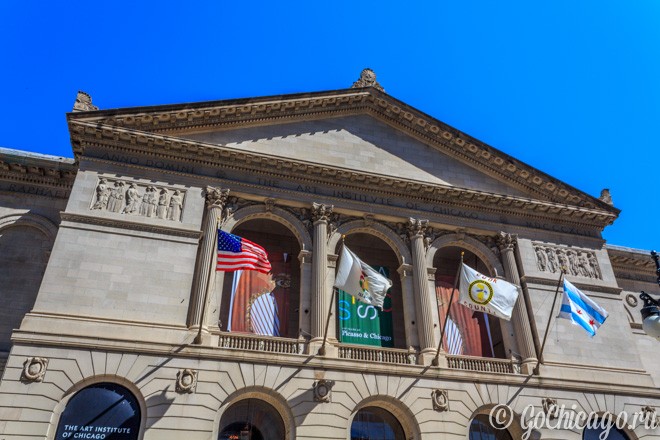 However, in connection with the forthcoming World Columbus Exhibition in 1893, which is planned to be held in Chicago, the trustees of the museum and the school found it necessary to recommend the new building and its name. Thus, in 1893, the magnificent Beaux-Arts, the building that now houses the Institute of Arts, was opened.

Designed by the Boston firm Shepley, Rutan, and Coolidge, the institution began to earn awards and honors almost from its inception.

The permanent collection of the Art Museum at the Art Institute of Chicago is so large that it will take you several hours to explore all this diversity and enjoy the beauty of world-famous masterpieces.

The museum collection of Impressionism is certainly one of the best in the country, especially fans of canvases by Claude Monet, Paul Cézanne, Auguste Renoir will be pleasantly surprised. The exhibition of modern art is also highly appreciated.

The Modern Wing of the Art Museum displays American and European works of art. Here you will find stunning works by Andy Warhol, Jackson Pollock, Pablo Picasso and Henri Matisse.

If it’s not in your interest, take a look at the Four Centuries of Arms and Armor exhibition, try the exquisite “dishes” of European arts and crafts, visit the famous art museum’s collection of photographs or the Asian exhibit showing 5000 years of art history of China, Korea, Japan, India, Southwest Asia, the Middle East. There are also galleries with unique Roman, Greek and Egyptian artifacts, striking the imagination of the hall with a beautiful collection of African art.

Children bored at the “family event”, it makes perfect sense to take to Kraft – an educational center for various interactive fun. You can be sure that their delight will be no limit: this type of entertainment is rarely found in museums of the art world.

For your convenience, there is also a full range of services: restaurant, cafe, and in the summer – outdoor cafe. Take some time to visit a large souvenir store full of treasures from around the world.