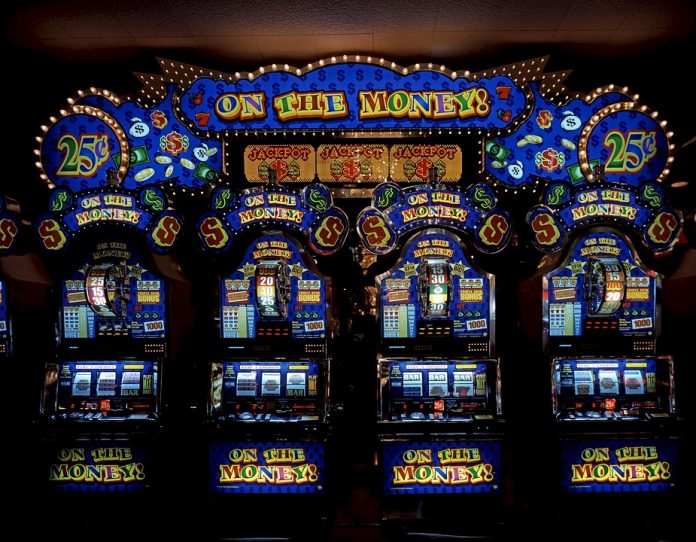 When one thinks of a typical slot machine, it is hard to envisage it forming a part of contemporary artwork.

Flashing lights and extravagant sounds all packed into a dimly lit hall doesn’t convey fine art, nor particularly good taste, but in fact slot machines have formed the basis for some wonderful pieces, both in their own right and as inspiration for artists to draw upon.

Mark Hall-Patton, a Clark County museum administrator, believes that the machines are works of art in themselves when viewed individually, away from the packed halls and other distractions. “When you look at it, you have to realize that not only is the machine designed by somebody,” he told the Las Vegas Review Journal. “But you had to have somebody do all of the art — the belly plate and the top plate and all of that.”

Indeed, with slot machines now spanning three different centuries, early models are a fascinating glimpse into the contemporary culture of their era. A feature on slot machines by Gala Spins reveals that they date back to the late 1800s, with many different styles emerging over that time. Earlier pieces are now not just sought-after collectors’ items, but also pieces of artwork that, like a fine masterpiece, have aged over time and evolved.

The earliest machines did not have the mechanics to pay out, instead, the establishments which housed them offered prizes based on how the reels finished up; it might be free beverages or cigars. Some of those early machines are now classed as valuable antiques and are worth several thousand dollars. They tended to be ornate, free of the garish adornments we see on today’s models.

Whilst the machines themselves could be considered art, several artists have taken it upon themselves to interpret them on canvass too. Mark Highton developed a whole exhibition around the themes, titled ‘3 Of a Kind’. He drew inspiration from both American and English pop artists such as Peter Phillip and Peter Blake, who also included ideas based upon slot machines. Highton claimed he had been inspired by his youth, which was filled with retro slots and other coin-operated machines.

Wayne Thiebaud turned 99 last November and is well known in the art world for his vibrant depictions of everyday items. Amongst the items he painted were cakes, candy machines, paint cans, and slot machines. His 1962 work Jackpot Machine came at the beginning of his career and is a classic example of his style that later led to him being presented with the National Medal of Arts by former President Bill Clinton. His work, colorful and alive, is perhaps best suited to our modern-day interpretation of a slot machine.

British-born artist Richard Smith also used a slot machine as his inspiration in the same year as Thiebaud, 1962. He painted Slot Machine, a slightly more subdued take on the subject but no less impactful or insightful. Smith later claimed he wanted to keep as close to the ethos of the objects he painted as possible. “An awareness of the product is necessary to read the painting,” he said. “Is it a pill or a boulder? A realization that it could be both alters the spectator’s reading of the painting.”

It might be hard to imagine artistic inspiration when wandering through the gaudy Las Vegas casinos, but art can be found in everything if you look hard enough. Whether it is the beauty of the machine, what it tells you about the era, or what it says to you directly, slot machines have inspired and will continue to do so through the ages.

For some slightly more classic art reading, be sure to check out our piece on The Marin, titled Picasso “Accidentally” Damaged, Withdrawn From Sale.

Helen - August 12, 2020 0
American artist John Currin was born in 1962 in Boulder, Colorado. His work is based on satire with provocatively sexual and social themes. His...