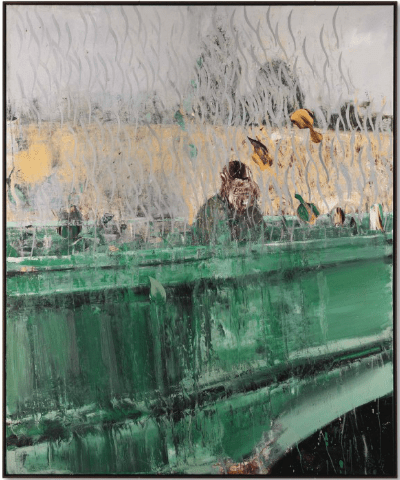 The New York Times claims to tell us how Adrian Ghenie became an auction star citing a grab bag of vague factors like the popularity of painting, a limited output, no competition from masterpieces, a good price point and a bunch of rich Asians champing to buy.

Somehow that constellation of facts has made Ghenie this decade’s Peter Doig (whose market was detonated by a bidding war among oligarchs a decade ago.) That may be so. But why Ghenie? Is it the Pinault connection with the artist having had a 2011 show at Palazzo Grassi?Christie’s did particularly well with Ghenie capping a year’s worth of rising prices with a $9m sale in London during Frieze week.

As one of Ghenie’s dealers, Thaddaeus Ropac points out in the Times story. Right now Ghenie needs more museum support than more auction sales. The Hamer bought two of the painter’s works in 2008 and Ghenie had a pavilion at the Venice Biennale which is probably the ground zero for this year’s auction A-bomb (being the right combination of curatorially driven event that doubles as a marketing opportunity.)

Here’s the Times on the biggest of the small Ghenies on offer next week (along with the usual auction house free association on related works):

At its postwar and contemporary auction on Nov. 15, Christie’s is selling Mr. Ghenie’s 2015 painting “The Bridge” — featuring the spectral figure of a man on a bridge that recalls the Impressionist Gustave Caillebotte’s “Le Pont de l’Europe” and the Expressionist Edvard Munch’s “The Scream” — for an estimated $1.5 million to $2.5 million.

“‘The Bridge’ has a lot of commercial aspects — a sense of Impressionism, Munch, Bacon, Darwin,” Mr. Gorvy said, adding that it is one of several Ghenies owned by the undisclosed seller. “We said, ‘Sell one, keep five.’”

Mihai Nicodim said he sold “The Bridge” out of his Los Angeles gallery two years ago for about $400,000. “I don’t like seeing it come up for sale again so quickly,” Mr. Nicodim said. “But when it gets to this level, you can’t blame the collectors.”

For those of you playing the who-is-the-seller game at home, one clue to the seller seems to be the city of the gallerist who originally sold it.

In Antarctica Was Found A Picture Drawn 100 Years Ago

Vhils – One Of The Top Street Artists In The World