Home Auctions Alain Delon Will Exhibit The Art Works From His Collection On Christie’s...

On 22 of November will be held the Paris auction Christie’s, dedicated the 100th anniversary of the suicide of a famous Italian artist Rembrandt Bugatti (1884-1916), who was famous for his unique bronze sculptures of wild animals. Only the auction will feature 17 lots.

French actor Alain Delon decided to put 12 pieces of works of the sculptor-animal painter. For many years Rembrandt Bugatti spent in various European Zoological gardens, carefully examining the behavior of animals. Unfortunately, it is his passion and he brought the sculptor to a tragic end.

During the First world war is very often due to lack of feed, the animals were put to sleep, and some of the victims were models, sensitive animal who just couldn’t take the separation from their Pets, fell into a severe depression and committed suicide at the age of 31 years. The auction house put up a bronze sculpture titled “Two big leopard” in 1913 with an estimate of 500-700,000€ and “African elephant and three Gazelle” approximately 1904 estimate: 350-400,000€. 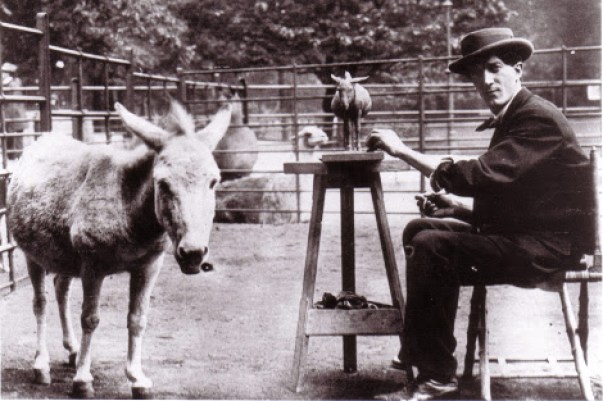 By the way, the original plaster cast of the latest Paris Eiffel tower. Rembrandt Bugatti is the Author of a monograph about Bugatti Veronica Fromange:

“Auction will be exhibited marble and bronze sculptures, which depict various animals. Among them are big cats, birds, elephant, group of yaks, three gazelles, lying dog and a running deer, and will also feature three female figures. It should be noted that these objects were cast, the famous founder of all time is Adrien Aurélien Hébrard”.

Unique marble sculpture “Seated on my knees” from the collection of the French actor with the estimated cost of 80-120,000€ before they were presented to the public at the Venice Biennale in 1910. By the way, he has previously sold at auction several works by the Bugatti from his collection. So, in 1990, the actor has exhibited at the London auction Sotheby’s more than 30 works of the sculptor.

Interesting to know! Collector Alain Delon was only about 30 years ago. Prior to that, he wasn’t interested in art. In the 80-ies the actor began to buy works by such artists as Albrecht dürer, eugène Delacroix and Theodore géricault. It was then that it acquired 14 sculptures created by Rembrandt Bugatti (he is the younger brother of the founder of the French machine-building company called Bugatti).