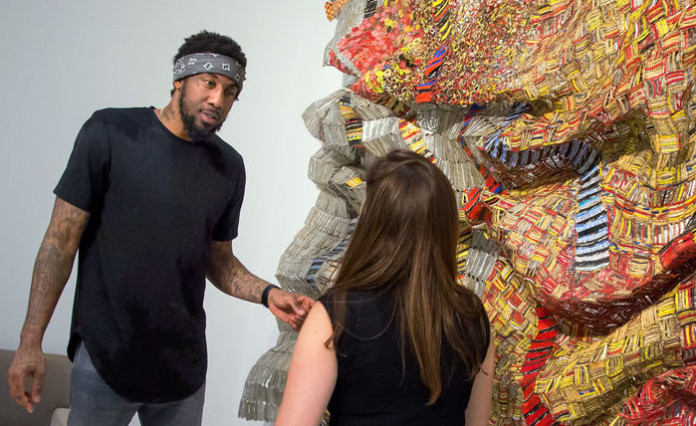 You have to admire Amar’e Stoudemire’s publicists. They’ve been working tirelessly to promote him as a player in the art world. Last week, the New York Times obliged with a long puff piece on the retiring Knicks forward’s new role as art ambassador:

“There’s a community of guys, maybe two handfuls, that are starting to become art collectors and taking it serious,” Mr. Stoudemire said of N.B.A. players. “That’s where I come in, to educate the rest of my colleagues on art and the art world. I’m able to bring a certain swagger to art, whether it’s pop culture or sports or entertainment.”

And last week, he completed a deal to become a brand ambassador for Sotheby’s, where he will host dinners and act as a liaison to high net-worth athletes. […]

“He’s held in high esteem amongst other players in the league,” said Justise Winslow, a second-year small forward on the Heat who is a collector of street art. During the basketball season, the two discussed African art and analyzed pieces in hotel lobbies.

“It goes back to trusting who’s schooling you on art,” Mr. Stoudemire said. “My word and character is on the line. I want to keep that golden.”