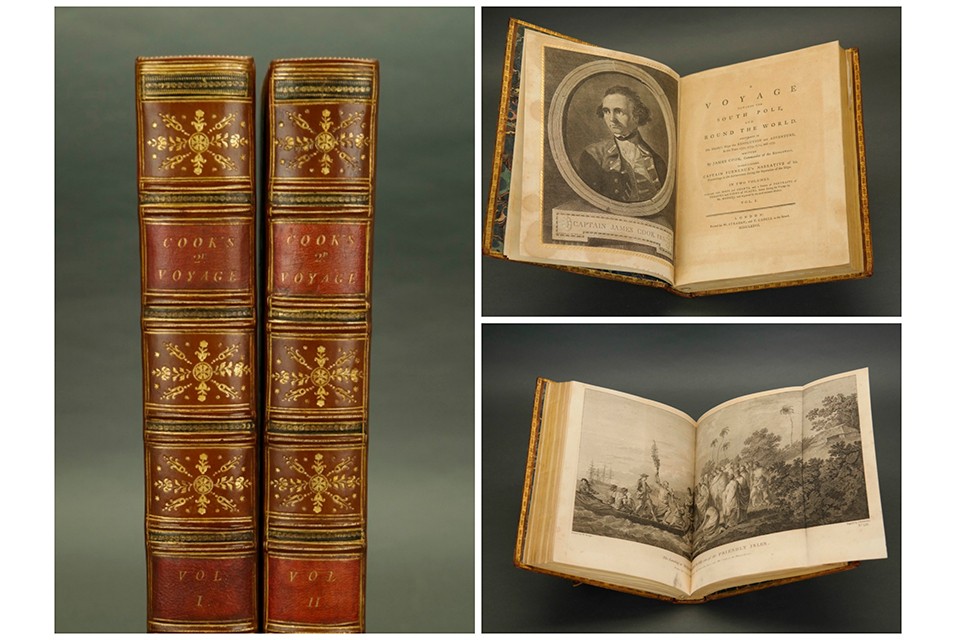 Rare books, manuscripts, maps, autographs, prints, photographs and ephemera spanning several centuries are up for bid in a catalog auction slated for this Thursday, March 22, by the Waverly Rare Books division of Quinn’s Auction Galleries. Bidding will be available by phone, online and in person at Quinn’s gallery at 360 South Washington Street in Falls Church, starting at 6 p.m. Eastern time.

Interested collectors can view all 413 lots in the online catalog now, and bid absentee or live via the Internet through LiveAuctioneers.com. Expected top lots include a letter written by Alexander Hamilton, a book depicting artworks by Louis C. Tiffany and hand-signed by Tiffany, a double-page map of Chesapeake, Va. (circa 1630-1663), and a painting by Sir Alexander Allen.

The letter by Hamilton, from 1794, is a handwritten and signed military request for wagons during the Whiskey Rebellion, a violent uprising that occurred mainly in western Pennsylvania in response to a federal tax on whiskey production. The letter has an estimate of $6,000-$9,000. The money will go toward restoration work being performed on the Hill House Museum in Pennsylvania.

A professional appraiser has authenticated the letter, as well as Hamilton’s signature. A spokesman for the Portsmouth Historical Association, involved in the restoration effort, said he hoped the letter would bring $11,000 or more, although around $100,000 is required to complete the entire project. The Hill House Museum has been a historical fixture near Portsmouth’s waterfront since the 1800s.

As important as it is, the Hamilton letter is not even the sale’s top-estimated item. That honor goes to a two-volume set of books being sold as one lot, titled Bucaniers of America, est. $7,500-$10,000. The unabridged first edition provides an account in English of the pirates and buccaneers of the New World. It includes engraved plates, folding maps and illustrations within the text. They were printed in London, England, in 1684.

The book titled The Art Work of Louis C. Tiffany, signed by Tiffany himself, was printed in 1914 and carries a pre-sale estimate of $2,000-$4,000. It is one of only 502 issued, and one of 492 that were printed on Japon vellum (numbered 354). The book boasts 21 tipped-in color plates and 42 photogravures with lettered tissue guards. The book was published by Doubleday, New York.

The pencil, pen, gray ink and watercolor painting by British artist Sir Alexander Allan (1764-1820), depicting a Sepoy (native) military train crossing a river ford, probably the 13th Madras Native Infantry attachment used in the Mysore Campaign, should fetch $1,000-$2,000. The work was painted around the 1790s and measures 20¾ inches by 16¼ inches, including the frame.

Baby boomers may recall Roald Dahl’s children’s book from 1961 titled James and the Giant Peach (Alfred A. Knopf, N.Y.). A first issue copy of the book is in the auction and carries a pre-sale estimate of $300-$500. The dust jacket reveals the book’s original cost at the time as $3.95.

A 19th-century colonial-era English School oil-on-canvas painting of an Indian or Middle Eastern man in a red-orange turban and blue jacket, wearing slippers and holding a pipe, should realize $200-$300. The undated and unsigned painting measures 23 inches by 29 inches in the frame.

An archive of letters and documents pertaining to Laszlo Biro, mostly on carbon paper, related to Biro’s effort to patent what eventually became the first commercially successful ballpoint pen, is estimated at $100-$200. The early 1940s trove features over 60 leaves, four photos and two pens.

The brilliantly rendered double-page map of Chesapeake, Va., and its surroundings (oriented to the west) is titled Nova Virginiae Tabula (circa 1630-1663) and could reach a winning bid of $800-$1,200. The map was based on Capt. John Smith’s map of Virginia, with continuations along the coastline. The plate was originally engraved by Jodocus Hondius, Jr., and was revised by Bleau circa 1629.

A two-volume set of books chronicling Capt. James Cook’s voyages to the South Pole and elsewhere around the world, printed in London in 1777 for W. Strahan and T. Cadell, is expected to garner $4,500-$6,500. The books, describing Cook’s exploits aboard His Majesty’s ships the Resolution and Adventure (1772-1775), have 50 engraved plates, 13 maps and six folding charts.

A rare and fragile copy of the book 7 Manifestes Dada by Tristan Tzara (1896-1963), signed and inscribed by Tzara in Oct. 1924 to Jacques Riviere (a major force in French intellectual life after World War I), is expected to sell for $2,000-$4,000. The book, in a custom blue half leather and cloth clamshell case, is in very good condition. It was printed in Paris by Editions du Diorama.

Previews are presently underway, at Waverly Rare Books’ gallery in northern Virginia, and will continue through auction day, Thursday, March 22, from 10 a.m. until 6 pm Eastern time.