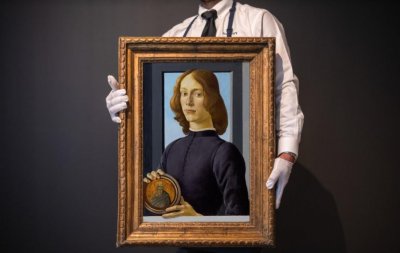 A painting “Young Man Holding a Roundel” by Florentine Renaissance artist Sandro Botticelli was sold at Sothebyʼs auction for 92.2 million dollars. This is one of the most expensive portraits in the history of auction sales.

#AuctionUpdate: Sandro Botticelli’s masterpiece Young Man Holding a Roundel, one of the most significant portraits of any period ever to appear at auction, and a defining work of the Florentine Renaissance achieves $92.2 million — a new auction record for the artist pic.twitter.com/lqsdOC1gtX

The identity of the buyer is not disclosed.

Although “Portrait of a Young Man with Medallion” (circa 1480) came up for auction with all the necessary trappings, such as X-rays and infrared images, and the price paid for it rejects any doubt, the many mysteries that keep the portrait still torment both scholars and market participants.

The work’s estimate (from $80 million) was unprecedented: paintings confidently attributed to Botticelli rarely find their way onto the market, and the auction record for the artist’s 2013 Madonna Rockefeller (also called “Madonna with Child and Young John the Baptist”) is only $10.4 million. In December 2020, at Sotheby’s London auction, an oil-on-board image of Christ on the Cross attributed to Botticelli was sold to an online Asian participant for just £1 million (with a commission at an estimate of £800,000 – £1.2 million).

The XRAY that would show the Roundel bright white, not the IRR. In terms of IRR, one shows the most underdrawing/changes. You see it in his shoulder, the buttons, the side of his face.
These aren’t your typical IRR images, but rather InGaAs images captured with an OSIRIS camera. These images do reveal underdrawing but also other areas of restoration/brushwork/etc, so it isn’t just straightforward underdrawing that you might normally expect.
Sotheby’s will offer one of Botticelli’s very finest portraits, Young Man Holding a Roundel, as the highlight of our annual Masters Week sales series in New York in January 2021. The work is estimated to sell for in excess of $80 million, which will establish it in art market history as one of the most significant portraits, of any period, ever to appear at auction.

This portrait, executed in tempera on a board of poplar, is very characteristic of the visual culture of fifteenth-century Florence and yet deeply contemporary in its simplicity and realism, according to the auction catalog. As a mature work by the great Florentine Renaissance master, the painting was first offered for auction in 1982, despite the fact that this attribution – made in 1941, when the work entered the famous collection of physicist Thomas Merton – was not authoritatively confirmed by Richard Stapford until 1987.

The previous time the portrait was auctioned, that is, in 1982 at Christie’s, it went for £810,000. The Getty Museum intended to acquire it, but according to its chief curator Burton Fredriksen, the institution abandoned those intentions after the authority expert Everett Fahey, at that time head of the Frick Collection, said that it was the work of Francesco Botticini (Botticelli follower; apparently, later Fahy changed his mind).

No one doubts the stunning beauty and quality of the portrait, but there are still people who are not convinced that it should be attributed to Botticelli himself and not to his school. When the portrait was exhibited at the National Gallery of Art in Washington in 2001-2002, its curator Alan Brown wrote in the exhibition catalog, “Given the magnificent quality and skill with which the portrait is painted, it is surprising how often scholars have expressed doubts about its attribution to the master.”

Among the scholars who have been cautious about the portrait was Frank Zellner, who in his 2005 catalog of Botticelli’s works placed it in the category of “disputed or inaccurate attributions,” in part due to a lack of provenance. So far, Sotheby’s has been able to trace the fate of the work back to Wales and the 1850s, but not beyond. Nevertheless, the results of new research seem to have convinced Zellner.

Recently, the New York branch of Sotheby’s invited Renaissance specialist Lawrence Kanter to view the portrait. For Kanter, the fickle attitude of critics toward the portrait is “completely irrelevant,” and the latest X-rays and infrared scans tell him nothing that he has not seen with his own eyes-“enchanting” Botticelli.

Many theories have been put forward as to who looks at us with the confident gaze of those brown eyes (perhaps devoid of the luster with which Botticelli usually adorns the eyes of his heroes). In his 1950 catalog of the Thomas Merton Collection, Alfred Scharf suggested that it was Giovanni di Pierfrancesco Medici, Lorenzo Medici’s third cousin (with the same title it went up for auction at Christie’s in 1982). Some experts consider his version convincing since Botticelli did work with this branch of the Medici family, but it is not possible to prove it.

The youth’s impeccable beauty contrasts sharply with the image of a gray-bearded saint with his hand raised in blessing, looking into the void from the medallion in the model’s hands. The medallion is slightly tilted toward the viewer, and its base rests on a parapet, partially concealed beneath the young man’s fingers, as if bursting into our space. This image is a mortised fragment of a real fourteenth-century altarpiece; apparently, in the fifteenth century, antique dealers hacked them to pieces with an unbroken hand. The author of this fragment is believed to be the Sienese artist Bartolomeo Bulgarini. But why would Botticelli include a fragment of Bulgarini’s work in his portrait?

There is a precedent of this kind in Botticelli’s oeuvre – it is a Portrait of an Unknown Man with the Medal of Cosimo de Medici the Elder (now in the Uffizi Gallery in Florence), created in the mid-1470s. In it another handsome young man seems to show the viewer a plaster and gilded copy of the medal cast in honor of Cosimo de Medici (Lorenzo’s father). In this way, the artist shows that he is a Medici supporter and also skillfully combines two-dimensional and three-dimensional image-making techniques in one work (Botticelli was trained as a goldsmith at the beginning of his career).

There is an opinion that Bulgarini’s work is included in the portrait as an integral part of the artist’s conception. Perhaps the young man was named after this venerable saint (it is possible that the fragment depicts St. Peter or St. Paul). Furthermore, we also see a play with different artistic techniques here – the gilded carved background is contrasted with the airy lightness of the painted sky. Some, however, believe that this inlay replaced a damaged stucco relief (Roberto Longhi) or that it is a later inclusion (Keith Christiansen). Others speculate that the painted frame on the portrait of the young man may originally have contained a round mirror, which was probably intended to reflect the face of his bride in accordance with the notions of courtly love that prevailed among the Florentine aristocracy of the period. 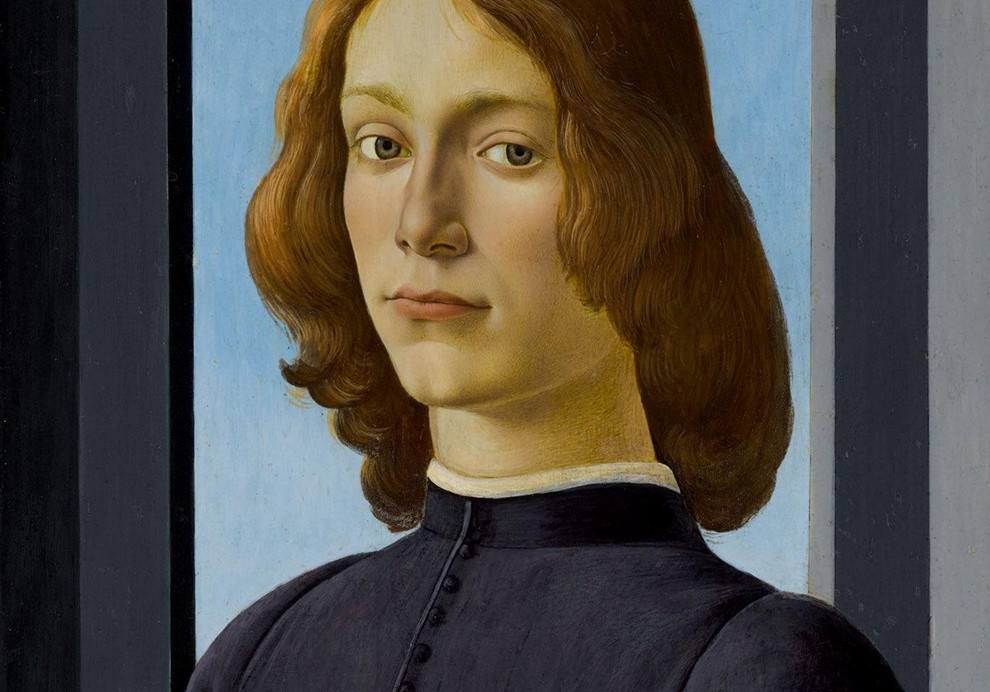 Dating the portrait stylistically from around 1481 to 1485, when Botticelli was working on frescoes for the Sistine Chapel in Rome and on mythological compositions such as The Birth of Venus, does not provide sufficient information to suggest whose commission it was painted for. All we know is that the singularity of this portrait and its inventive illusionism is characteristic of the tradition of aristocratic portraits, which were very expensive and accessible only to members of the upper classes.