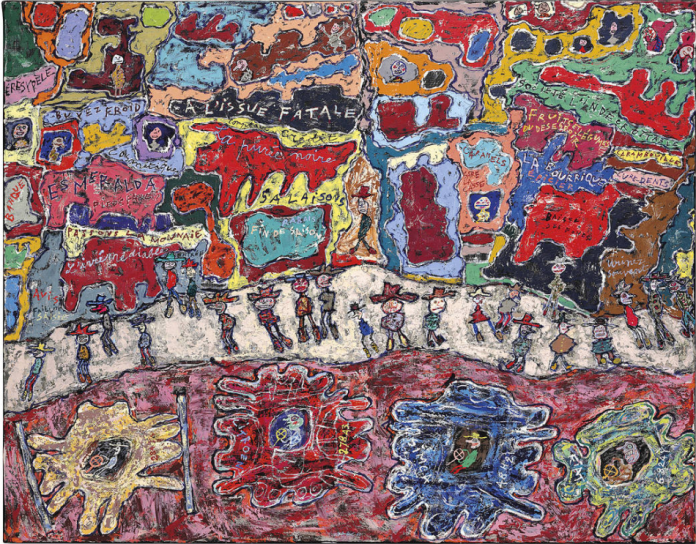 How to characterize Christie’s long $277m Postwar and Contemporary Evening sale? Was it a success? Surely. A handful of lots, two of the top lots and at least one obscure lot from a well-regarded Italian collection, saw the kind of bidding that marks a vibrant, aggressive art market. Although it was only a year ago, it seems like a long time since we’ve seen that kind of bidding.

For most of the sale, the steady work of achieving prices at or near the low estimate aided on nearly one-third of the lots by some sort of a guarantee gave the impression of a market caught between moderate demand and immoderate expectations.

On the issue of guarantees, Christie’s said that 17 of the 54 lots that sold were guaranteed either by the house or third parties. Only two of the reported lots in the sale were reported with fixed-fee guarantees. Those two works were a Christopher Wool Untitled for $5.5m and an Agnes Martin Untitled #9 for $4.28m.

Christie’s used those guarantees to good effect to provide a reassuring sell-through rate and a solid total sale. But astute observers with a good feel for markets sensed the signals.

Here’s the New York Times gathering comments on the sale:

“It was slow and sobering,” the Los Angeles collector Eli Broad said. “The market is tired.”

The big story of the evening was the sale of Willem de Kooning’s 1970s landscape work for $66m. Part of the story is simply the work’s market resilience. Christie’s sold the painting in 2006 for $27m. The buyer was forced to sell during the financial crisis but not at a loss. Reports have the 2009 private sale taking place in the mid-30m range.

That the 2009 sale might have been higher without global financial pressures was demonstrated by the work doubling in price paid over the last seven years.

Katya Kazakina worked the dealer network to get the names behind those private sales:

An avid art collector and investor, Ivanishvili bought the work privately in 2009, said the person, who asked not to be named because the information is private. At the time it was sold by Frank J. Fertitta III, the chairman and chief executive officer of Las Vegas-based Station Casinos LLC, who acquired it for $27.1 million at Christie’s in 2006, the person said.

Another interesting fact about Christie’s sale was the relatively small number of works with recent sales histories. The great Dubuffet Les Grandes Arteres which the Times learned was, according to Christophe Van de Weghe, “one of the five best Dubuffets in private hands,” sold for $23.8m but it had been bought privately more than 50 years ago.

In the same price region, Eric Clapton’s third Richter abstract made a strong $22m. Altogether, the triptych Clapton bought in the auctions held the aftermath of 9/11 has yielded $77m. The first lot made the most at $34m; the second lot, the least at $21m; and this third sale came in at $22m.

Christie’s smaller Richter abstract also sold well at $5.8m. That sets up the remaining Richter abstracts from the Ames collection that will be sold on Thursday well. But there’s always a chance Christie’s has now taken out one potential bidder.

It should be noted that several reporters made a big deal of the Richter being bought by Paul Gray on the assumption that Gray was bidding for Kenneth Griffin who already owns the most expensive Richter abstract ever to be sold.

There was also Peter Brant’s John Currin painting Nice ‘n’ Easy that sold to its third-party guarantor to again set a record for the painter’s work at $12m. Brant made a very good buy in the depressed sales of November 2008 when he picked it up for $5.4m, even if that was a record price.

The Master, Judd Tully, has some more of the reference prices:

On the increasingly rare-to-market Pop Art front, Andy Warhol’s “Statue of Liberty” from 1986, reprised from a close up photograph of Lady Liberty’s head and transformed in a camouflage pattern, sold to Zurich dealer Doris Ammann  for $3,719,500 (est. $3-6 million). The 72-inch-square painting last sold at Phillips, de Pury & Luxembourg New York in May 2002 for $574,000.

An earlier and decidedly iconic work, Warhol’s “Self-Portrait” from 1966, featuring the artist thoughtfully posed with fingers touching his chin against a fire-engine red ground, sold to New York private dealer Neal Meltzer for $6,519,500 (est. $4-6 million). The self-portrait last sold at Sotheby’s New York in May 2002 for $1,769,000.

And, on a final note, although the market burned unsustainably throughout 2014 and into 2015, there are some who see this fallow period and immediately long for the recent past:

“I think it was slightly on the weak side”, said the dealer David Nahmad, who all the same picked up an Alexander Calder mobile from 1948 for $3.7m. “I think there were fewer good works. This is the first season that I don’t see a Rothko on the stage. Remember last year? They had a nude by Modigliani, they had [Pablo Picasso’s] Women of Algiers, they had Van Gogh, Cezanne. There’s a scarcity.”