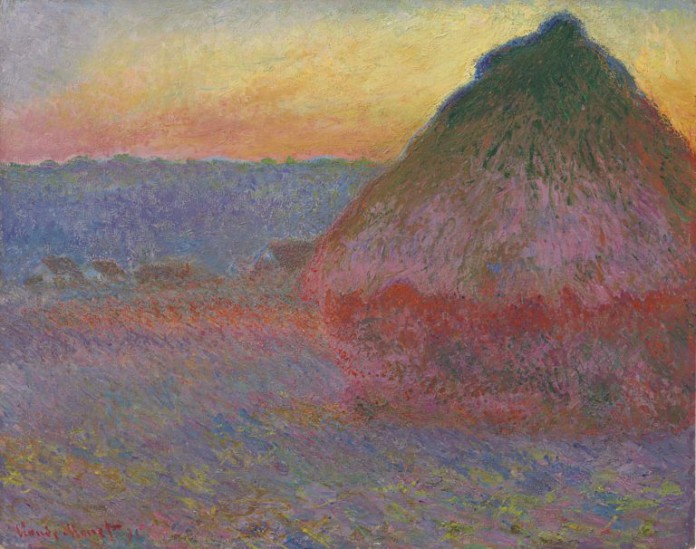 It’s a late addition to Christie’s New York Impressionist and Modern sale but something that was well worth the wait. Christie’s will be touring this Monet, Meule from 1891 will first be seen in Hong Kong starting next week and London the week after. The estimate has wiggle room but the target price is around $45m. Here’s part of Christie’s release on the subject:

The Grainstack series – some twenty-five canvases in all – was the most challenging and revolutionary endeavor that Monet, then fifty years old, had ever undertaken. While he had experimented during the later 1880s with depicting a single landscape subject under different lighting and weather conditions, never before had he conceived of painting so many pictures that were differentiated almost entirely through color, touch, and atmospheric effect. The present painting is among the most formally adventurous of all the Grainstacks – part of a trio of canvases in which a single conical meule is seen
close up and cropped by the painting’s edge, transcending naturalism in form and color alike.

Conor Jordan, Deputy Chairman of Impressionist and Modern Art, comments: “Claude Monet’s Meule, a work of shimmering beauty, is one of the last remaining examples in private hands of the artist’s momentous series of Grainstack paintings executed over the winter of 1890-1891. A rhapsody of twilight atmosphere, Meule is rendered with a weft of jewel-like color that evokes both radiant glory of a moment and the universal qualities of the passage of time in nature.”

Monet and his art dealer Durand-Ruel exhibited fifteen Meules in May 1891 to great acclaim and by the close of 1891, all but two of the Grainstacks had left the artist’s studio. The present painting is one of five from the series that the American-based dealer Knoedler selected from the artist in September 1891, and the only one from that group to remain today in private hands.

A majority of the Grainstacks series are housed in major art museums around the world, including the Musée d’Orsay, The Metropolitan Museum of Art, the Art Institute of Chicago, and the National Gallery of Scotland, while few are held in private collections. In recent years, prices for exceptional examples of Monet’s work have soared, driven by demand from collectors worldwide for masterpiece quality works by the greatest master of the Impressionist period. The top price at auction for any Monet painting is $80.4 million for Le Bassin aux nympheas from 1919, sold at Christie’s London in June 2008 against an estimate of $35-47 million.