The auction house Christie’s announced that on June 5, 2017, as part of the auction of Russian art in London, in total, more than 290 works of painting and decorative and applied art will be exhibited. In the painting section, more than 90 paintings and drawings by outstanding Russian artists will be presented, including Ilya Repin, Ivan Shishkin, Konstantin Somov, Elizaveta Kruglikova, Boris Kustodiev, Anna Ostroumova-Lebedeva, Konstantin Korovin, Andrei Sobolevsky, and Konstantin Somov.

Among the artists of the second half of the nineteenth century, whose works will also be auctioned, Klavdia Lebedev, Konstantin Makovsky, Boris Belinsky, Alexander Golovin should be specially mentioned. In the section of decorative and applied art collectors will be offered more than 170 works, including Faberge products and works by the masters of the Imperial Porcelain Factory.

Christie, the oldest auction house in the world, began selling paintings, furniture, jewelry and rare wines as early as 1766. That year, on December 5 in London, James Christie held the first sale.

Since then, Christie’s auction house has significantly strengthened its position, becoming one of the best in the world, selling in more than 80 different categories, including painting, decorative and jewelry, rare wines and collectible items.

Christie’s will present luxury products of the jewelry company Faberge. This is a particularly rare and valuable items, including such items of the St. Petersburg jewelry house “Faberge”, which were previously stored exclusively in private collections. This is a product of porcelain, gold, silver and ivory, embodying the imperial spirit and style that were characteristic of the era and crowned customers.

A special top lot of the auction will be the Faberge watch. A highly important and impressive silver-gilt and guilloche enamel bowenite mntel clock marked FABERGE with the imperial warrant, with the workmaster’s mark of Julius rappoport, St. Petersburg, 1899-1904. Of architectural form, on a bowenite base and four silver-gilt beaded bun feet, the white enamel dial with black Arabic chapters, set in an arched rectangular panel of translucent burgundy red enamel over a sunburst guilloché ground, surmounted by a laurel swag, the side panels similarly decorated and enamelled in red over a scalloped guilloché ground, all within silver-mounted bowenite Ionic pillars, surmounted by an openwork gallery with a flaming urn finial.

An impressive gem-set silver kovsh and ladle marked K.FABERGE with the imperial, Moscow, 1899-1908.
Of round shape, formed as a traditional kovsh with a raised prow, set with a bud finial, the sides cast and finely chased with two roundels depicting Russian bogatyrs in full armour, the top border decorated with a floral design and set with two sapphires, the curved handle similarly chased with a flower and set with a sapphire, on four ball feet

During the revolution, the collection of Faberge’s unique jewels disappeared without a trace. But over the past 20 years, more than 200 items from it with the brand of the Faberge factory sold at antique auctions “Sotheby’s” and “Christie” at sky-high prices.

Christie’s is the leader of the world art market, whose total revenue for auction, private and online sales is about £ 4.8 / $ 7.4 billion. Christie’s is a world-famous name associated with outstanding works of art, unrivaled professionalism, unprecedentedly high Visual level 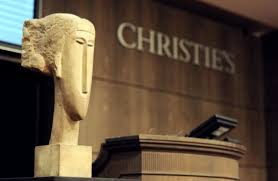 of services provided and the world of luxury. In 2016, Christie’s celebrated its 250th anniversary. Founded in 1766 by James Christie, theauction house Christie’s has been holding outstanding auction since the XVIII century, and today remains a popular platform for all the most unique and beautiful. Christie’s annually arranges more than 350 trades in 80 categories, including all areas of fine and applied art, jewelry, photography, collectibles, wine and so on. Prices range from $ 200 to over $ 100 million.