The house’s sale of works from the golden age of luxury travel features six posters by the French artist Jean Dupas that were commissioned by the London Passenger Transport Board, now known as Transport for London, to promote its launch in 1933. This poster paints an idyllic image of London high society in the form of a fashionable parade of strolling men and lounging women, depicted in Dupas’ signature art new style. Another example of this work achieved £20,000 (est. £7,000-£9,000) in a Christie’s, London sale in 2010.

Although the poster is being offered in less than pristine condition, with some staining and repaired tears, among other flaws, it retains a collectible value for its small scale, as Dupas was best known for producing large-format murals. Earlier this year, Sotheby’s, New York achieved $1.4m for an assemblage of eight panels that Dupas created for the lavish S.S. Normandie ocean liner. The artist’s flair for sweeping compositions and grandeur is evident even in the much smaller scale of this poster. 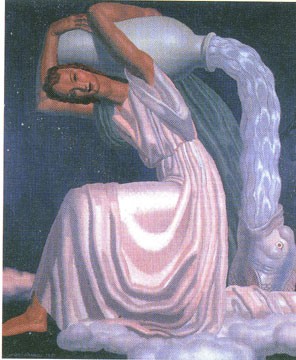 Jean Theodore Dupas was born in Bordeaux on February 2, 1882. He was a designer, poster artist, and decorator, but above all, he is the painter most closely associated with the Art Deco period. Dupas was part of the Bordeaux School, which included other renowned artists, such as Robert Eugene Pougheon, René Buthaud, Jean Gabriel Domergue, Raphael Delorme, and his close friend and collaborator, Alfred Janniot.

In 1925 Dupas participated in one of the most heralded exhibitions of all time, the Grand Exposition Internationale des Arts Décoratifs et Industriels Modernes in Paris, from which derives the term Art Deco.  At this show, he exhibited “Les Perruches“, not only one of his most famous paintings but perhaps also one of the defining paintings of his career and perhaps the most well-known of the Art Deco movement. This painting was part of Emile-Jacques Ruhlmann’s Hotel dun Collectionneur. This was not the first time that Ruhlmann collaborated on a project with Dupas, and certainly not the last. 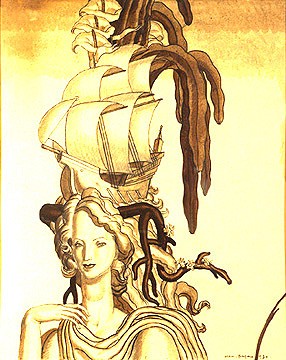 His style, based on the new precepts of Cubism, is related to that of Van Dongen, de la Fresnaye, and Leger. Dupas’ treatment of space often creates a surrealist, idealized pastoral landscape as a setting for his figures, gracefully distorted by elegant elongation.

The “Dupas look” dominates advertising and commercial art throughout the whole of the Art Moderne period. In fact, Dupas did a lot of posters and other advertising work. His work also frequently appeared in fashion magazines such as Vogue and Harper’s Bazaar, and he also created a catalog for the furrier Max, in 1927, which is considered to be a “masterpiece of print advertising.” It is easy to recognize a “Dupas woman” – the hair is cropped, her eyes are almond shaped, the mouth is small but full, and her neck is always elongated.